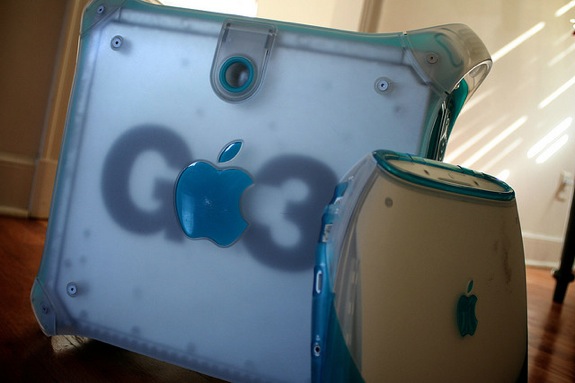 I spent my evening setting up an original Blueberry-colored iBook “Clamshell” G3. You remember this machine, right? It was the very first iBook, introduced in 1999. It has a damn handle, for crying out loud. The photo above is of my machine, leaning up against a “Blue & White” PowerMac G3 I used to have.

Now, I love old tech. I really do. But tonight’s adventure in time travel had a purpose, believe it or not.

Last week, AppleCare agreed to replace my 24-inch iMac with a new 27-inch model after the machine had numerous major repairs. Since the boss likes me to have my work-supplied MacBook Pro with me when I’m at work, I couldn’t leave it at home for my wife to use.

The Clamshell has been in the hall closet for a while now. In fact, I had forgotten it was running OS 9 last time I had it out. So, after finding the charger and my OS X 10.3 CDs, I settled down to install Panther on the 12-year-old laptop.

The entire Clamshell iBook line is striking in person. It looks pretty dated, but seen from the beige box-based design philosophy of 1999 when it was introduced, its mind-blowing. The colored rubber slices the machine in half, covering most of the bottom and a good bit of the lid. Sadly, the Apple logo is upside down, like on many other older models. The rubber and translucent lid lets a little light in through the case around the LCD, which can be distracting.

My model used to belong to a local school district, so the lid has a branded logo pressed into the rubber. Other than that, its in great shape.

Which isn’t surprising, since Apple designed these things to be basically indestructible.

Like modern machines, there are no latches to hold the LCD shut when the unit is closed. It’s curious that Apple added those back to later models of the iBook G3 and G4. The Clamshell also has a power adaptor that turns from orange to green when the battery is charged and a sleep indicator light. Instead of white, though, this light is a bright green and its situated on the hinge, so it can be seen if the lid is opened or closed. Old-school, for sure.

The keyboard is similar to those that shipped on the Pismo — which may be my favorite notebook laptop ever. Sadly, the typing surface is a little mushy, but the keys are firm and clicky. My big peeve here is that the right-side Command key is an Enter key.

The trackpad works well, and is small enough to not get in the way too badly, which is nice, since OS X 10.3 can’t ignore “accidental input” from the trackpad.

The screen — while praised by Steve Jobs in the aforelinked keynote — isn’t great. I can forgive the fact that its just 800 x 600, but the color is pretty bad. The panel blows out the highlights.

After a full charge, the battery meter has almost 5 hours on it. If the battery is as good as it was last time I played around with it, I think it will reach that without any problem. This unit has an Apple battery in it, but not the factory original.

This model came with a tiny hard drive, but at some point down the line got upgraded to a spacious 20 GB hard drive. Fancy. There’s no Bluetooth, though. And just the original Airport card. And a CD-ROM drive.

Panther — OS X 10.3 — is what I would consider the first version of OS X really ready for the average user. Its small — the base install of version 10.3.2 requires only 932 MB of hard drive space. On this machine it boots quickly and is fairly responsive. I ran several rounds of updates with no issue.

Panther introduced Exposé, which is a little slow on the iBook. iChat works without issue, as does Mail.

Panther featured the Brushed Metal UI. Everywhere. I had forgotten how much there was. Windows are clunky and everything has rounded-corners.

The big problem with older OSs is having to use older browsers. There are few ways around this. I used to like Firefox more on older systems (Ironic, since I hate it everywhere else.) Sadly, Firefox 3.6 requires 10.4, so I opted to put Camino 1.6 on the iBook. Camino is built on the same foundation as Firefox, but runs a lot lighter, if that makes sense. In Camino 1.6, Gmail fully loads — a huge factor for many users, including my iMac-less wife.

This machine won’t run Tiger, since it doesn’t have a FireWire port. However, later model Clamshell iBooks are equipped with one, offering a better experience in a Snow Leopard world.

Its startling how little OS X has changed since 10.3 Sure, the UI is refined, but things basically work the same in Panther as they do in Snow Leopard.

End of the Rope

As cool (Is that the right word?) as this iBook is, its not a valid machine anymore unless you need a netbook-class machine. Even then, the screen resolution and the lack of a modern browser are troublesome. At best, this notebook is a hobby. Which is sad, since I love it, despite its quirky appearance. And the handle. When I went to Cupertino in 2007 for Genius training, I took this machine, since my PowerBook was in the shop. I got some looks on Apple’s campus.

300 Mhz doesn’t go as far as it used to. But this little iBook has a little fight left in it yet.