Editor’s Note: This guest post was written by friend Kevin Lipe, after a discussion over beer and pizza about writing on the Mac, and how it has changed over the years. Longtime reader may remember that Kevin is the guy I bought this domain name from. Kevin is a native Memphian, a killer musician and a great writer.

The First Cut is the Deepest 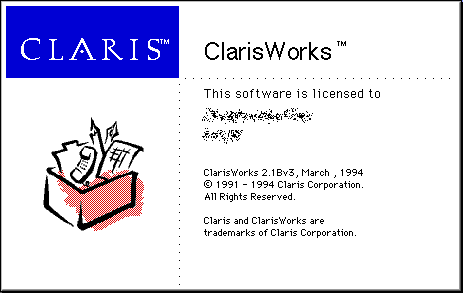 The first word processor I ever used seriously for any amount of time was ClarisWorks 2.1. We had a Performa 578 running System 7.5.5, and ClarisWorks was all I had. I spent hour after hour writing “books” — usually twenty pages or so of fiction, or, well, a seven-year-old’s idea of fiction — and printing them out, reading them to my parents and to myself and to anyone else who would listen. I was a writer, the world’s youngest important author. I knew how to do everything ClarisWorks could do. I even tried to wrap my head around Publishers, which were a weird feature I still don’t understand.

When Apple killed its Claris subsidiary, ClarisWorks was rebranded as AppleWorks and a new version was released. I still have a copy of AppleWorks installed on my MacBook Pro, and occasionally I’ll fire it up and try to rip out page after page of derivative, syntactically-horrific prose the same way I did when I was seven. But if you look at it, actually look at the way the words look on the page, everything is “off.” It’s a time warp to that weird period in Mac history where our computers were weird bright colors and ran two operating systems at the same time (usually 9.2.2 and Jaguar, although 8.5 was still floating around). Laptops looked like toilet seats (God bless ‘em) and fonts in AppleWorks looked like garbage. The whole thing feels weird in a way that ClarisWorks didn’t, because it doesn’t fit with either user interface because it’s trying to fit with both. It mostly stays out of the way, except it’s so limited in its capabilities as to be an exercise in masochism.

There were contemporaries to AppleWorks, though. Around the end of the Classic era,1 Microsoft came out with Office 98, which was an awful abortion, but it was also a direct result of a terrible moment in Macintosh history: the replacement of Word 5 by Word 6. It was at this point that “standard word processors” stopped being minimal and work-oriented and started pandering to mothers making sixth-grade-class newsletters. This is the first point at which word processors started mirroring the increasing complexity and distraction of computing environments in general, and the point at which I started having trouble using them for writing.

The One True (Microsoft) Word 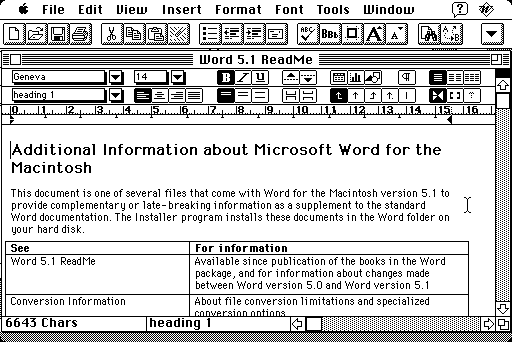 According to this Wired piece, Microsoft Word 5.1 came out in October of 1991. It was the culmination of six years of Mac Word versions (version 1 and 3; there was no Word 2 for Mac because it skipped version numbers to match up with the DOS version), a minimalist interface with just enough window chrome to let you align text, pick a font, space your lines—do the simple things you need to do when composing a document. No multimedia here, no fine-grained control over typeface features (if only because there weren’t any fine-grained typeface features), no nothing that didn’t need to be there.

I’ve written an entire novel (seriously!) in this program, and it’s a beautiful experience. I have a PowerBook 180, running System 7.6, literally only for running Word 5.2 The program is responsive, and it stays out of your way, forcing you to think about what you’re typing rather than how it looks, or what format you’re going to save it in, or whether or not it will work on multiple platforms (it probably won’t, unless that platform is a Mac) — you just write your words. It’s called Word. There’s a reason for that.

Off the Rails on the Crazy Train 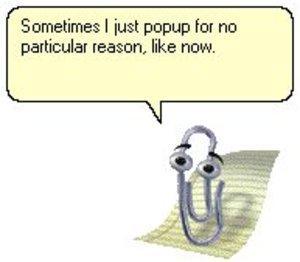 I’ve tried almost every word processor in existence, and compared to Word 5, and even to the old ClarisWorks (also known as MacWrite II or MacWrite Pro), most of them are terrible.

Most modern apps are cluttered, they’re fiddly, and they’re trying to tell me what to do before I even start typing. Their default formatting settings on new documents are horrendous (especially on the Office 2007 or later versions), or they have weird file formats (or RTF, which is such a vague standard as to barely be interoperable between programs, resulting in crazy formatting weirdness even when using different programs to edit the same files).

Clippy gets a lot of criticism, but Clippy was a symptom, not a problem. Word processors, around 1993 or so, started getting crappy, and they haven’t really started getting better—not for long-form writing. Writing a novel in a word processor now is filled with fiddling—getting the font right, getting the header right, getting everything in manuscript format, getting everything just so so you feel comfortable enough to worry about the writing and not the computer. They started trying to help—and helping a writer while he or she is writing is impossible. 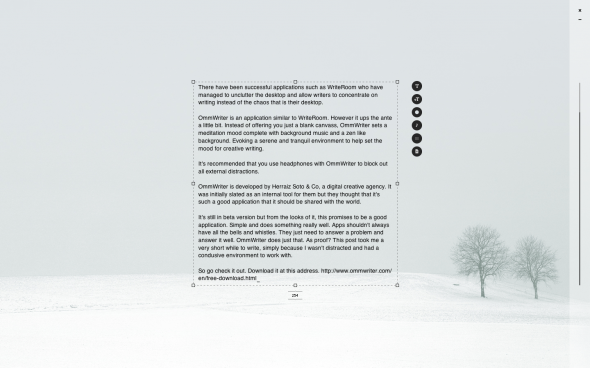 Figure 4: OmmWriter Tries Not To Harsh Your Mellow

The Mac is at a weird place right now. We have a lot of tools, like Scrivener and Ulysses and WriteRoom and others I’m sure I’m forgetting, designed to make writing long pieces easier, and designed to do exactly what Word 5.1 does: get out of the writer’s way, and let them worry about making the clackety sound with their keyboards instead of fiddling with application settings because they’re scared to write. These tools—“writing environments” or whatever else you want to call them—have an inherent problem: they’re designed around the writing workflows and processes of the people who wrote them. The author of Scrivener really only knows one way to write a book: the way he writes a book. The author(s) of another program write differently, and thus their programs operate differently.

They’re all sort of tailored to the way certain people write, and this can be a problem when, like me, they don’t really fit the way you write. I’ve bought all of them, and they all almost get there, but I still end up wishing things worked differently than they did, that they needed less fiddling to operate the way I want them to.

It’s telling that many of these programs bill themselves as “distraction free,” some of them going to absolutely ridiculous lengths to try to keep the user from being able to get sidetracked while drafting text. It’s ridiculous, really, and the further these programs go in that direction, the less useful they really are for dealing with novel-length material. If you’re going to show me a sentence at a time, I can’t possibly work with a 100,000 word manuscript. These things are getting so ridiculous that the best way I can prove it to you is to point you at Merlin Mann’s parody thereof.

Slouching Toward Gruber, or, A New Hope

There’s a way out of this loop of bouncing between cluttered word processors and process-centric writing tools, a way to avoid having cater to Clippy’s every whim while not having to hide your own work from yourself in order to concentrate. People have been saying for years that Word 5.1 needs to be ported to Mac OS X; that having that program running on current hardware would be the ideal solution to all of these problems with writing tools.

The truth is, there’s a solution now that’s most of the way there: Markdown and a good text editor. That’s the new Word 5.1. Think about it: a program like TextMate3 has almost no window chrome, and opens almost instantly. You start typing, and that’s all you have to do. I bring up Gruber because he invented Markdown, which lets you do basic formatting of text without really having to sweat much else. The types of formatting you don’t need aren’t even available to you when writing Markdown in a text editor, so you never have to deal with them.

Markdown will never be unreadable by a program, because it’s just ASCII text. It’s formatted, but if you’re reading the raw text, it’s not obscured the way a raw HTML file is. Any decent editor will give you a word count and can use headings as section and chapter breaks. With MultiMarkdown the options get even crazier: render your text file as a LaTeX document, or straight to PDF, or any number of other things. All from a text file and an editor with a minimal interface.

Word 5.1 will never come back. It can’t even be run on a current Mac; the only even halfway modern Macs that will run it are the few PowerPC machines left still running Tiger (which, I assume, are mostly within school districts and homes with people over forty). No one will ever rewrite it on OS X the way you and all your friends (and I, deep down) wish it would be. Writing environments are nice, if they fit your workflow, but if they don’t, they just get in the way, and trying to keep yourself distracted by torturing yourself with limitations seems like the kind of thing Thomas More4 would be into, wearing the hair shirt as penance for not being able to keep yourself on task.

All you need is a good text editor. Really. That’s all.

It should do exactly what Word 5.1 did best: get out of the way. Once you realize this and you let go of your System 7 nostalgia, you will realize this. You’ll miss Word 5, sure, but you won’t miss having to make sure your TCP stack extension is loaded.

Trust me: John Gruber will save us all—has already saved us all. You don’t have to wade through the billions of toolbars and the forty-second load times, and you don’t have to punish yourself for wanting to run more than one program.5

Markdown is the new Word 5.1. Seriously. 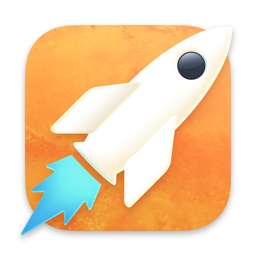