Just shy of a year ago, a Kickstarter project was launched that would take the nerd world by storm. In five weeks, the group raised $10,266,845, even though they needed only $100,000 to launch. The Pebble was born. 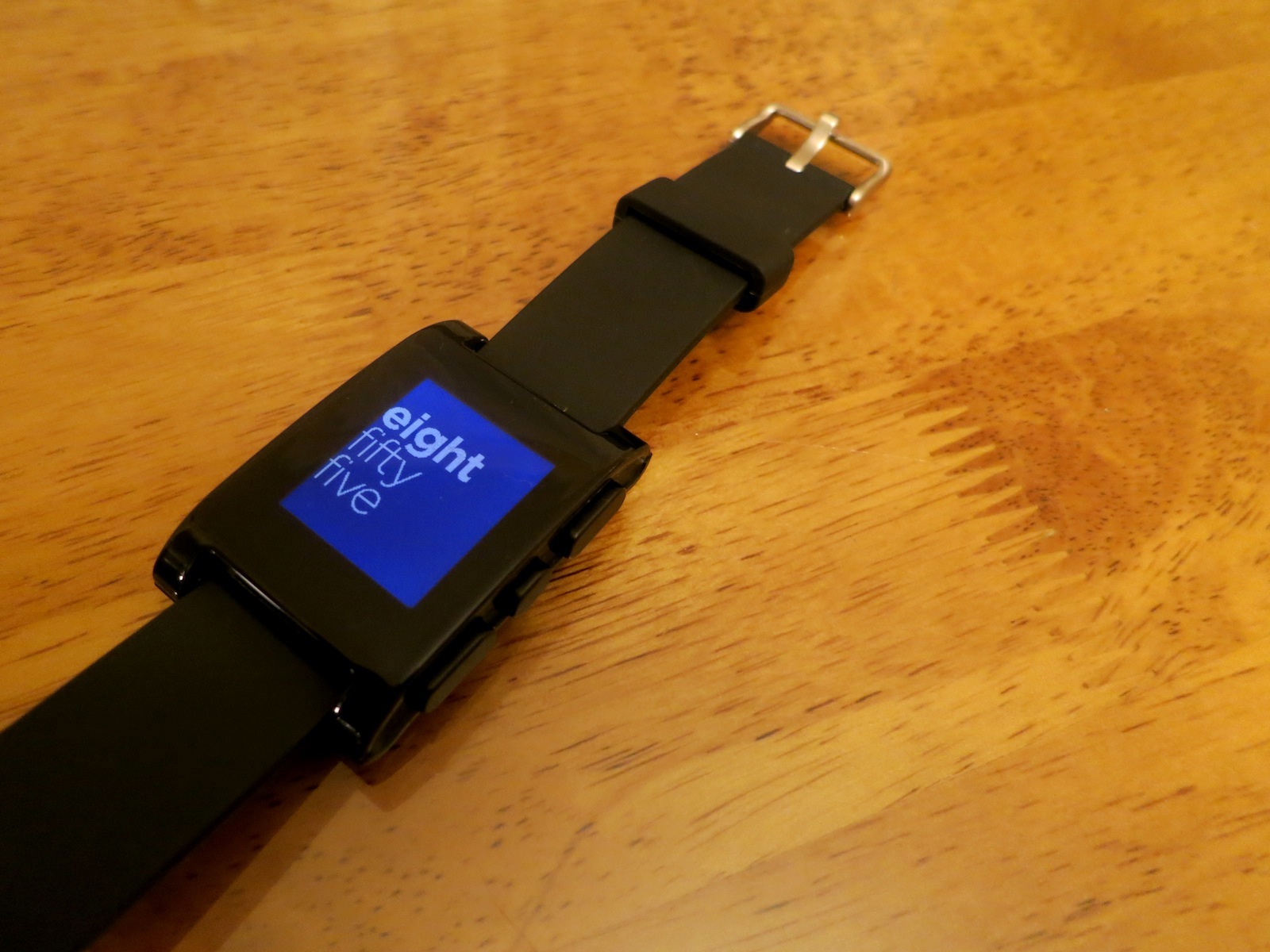 A year later,I’m sitting at my dining room table with the smartwatch next to my MacBook Pro. I’ve had it for a couple of days, and have collected my thoughts on this new-to-me product category.

The Pebble’s name is apt. Mine is the “jet black” option, and it is as slick and smooth as a polished stone.

It’s about as light as my normal watch, but taller. As such, it doesn’t sit as nicely against the top of my wrist as my Casio does. It’s bulky, but not heavy. You know how weird the weight of the iPhone 5 felt at first? It’s like that, sort of.

The band is made of soft rubber and feels great. 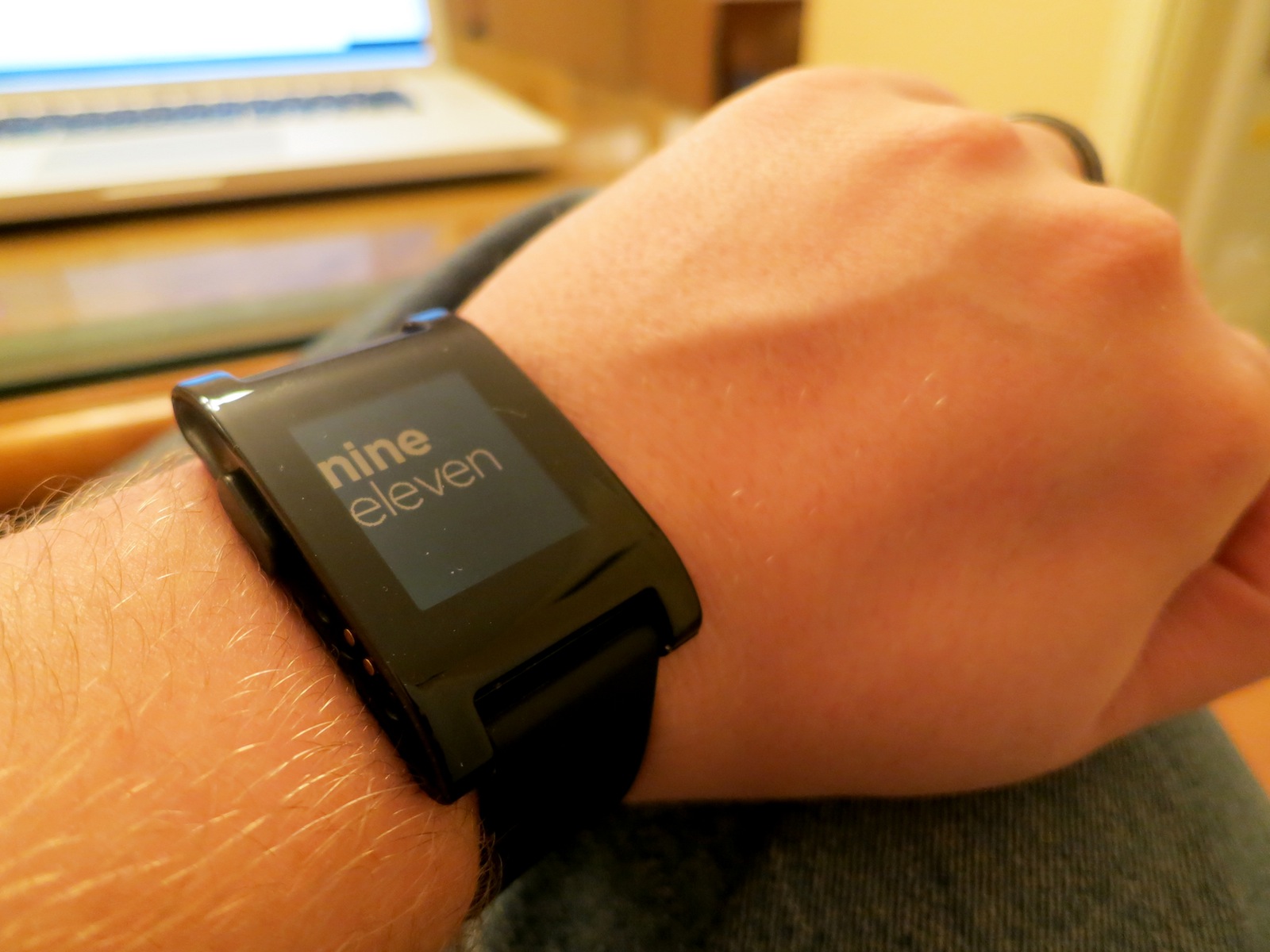 The sides of the Pebble are pretty busy. The left side (shown above) houses the back button and a custom charger. The charger works over USB, and connects to the gold pins show above. While the charger snaps in to place easily enough, I don’t like the exposed pins.

The right side has three buttons. The top and bottom ones are oblong, with the middle one shorter than the others. They feel cheap. Unless pressed directly, they rock a bit, and can depress a fair amount before engaging whatever mechanism is underneath.

The 144 x 168 pixel display black and white e-paper screen is recessed into the watch, and unless it’s in direct sunlight, it’s hard to tell where it ends and the chunky plastic bezel begins. The screen isn’t super sharp, but its usable. I haven’t seen it glitch or slow down while paging through the menus. 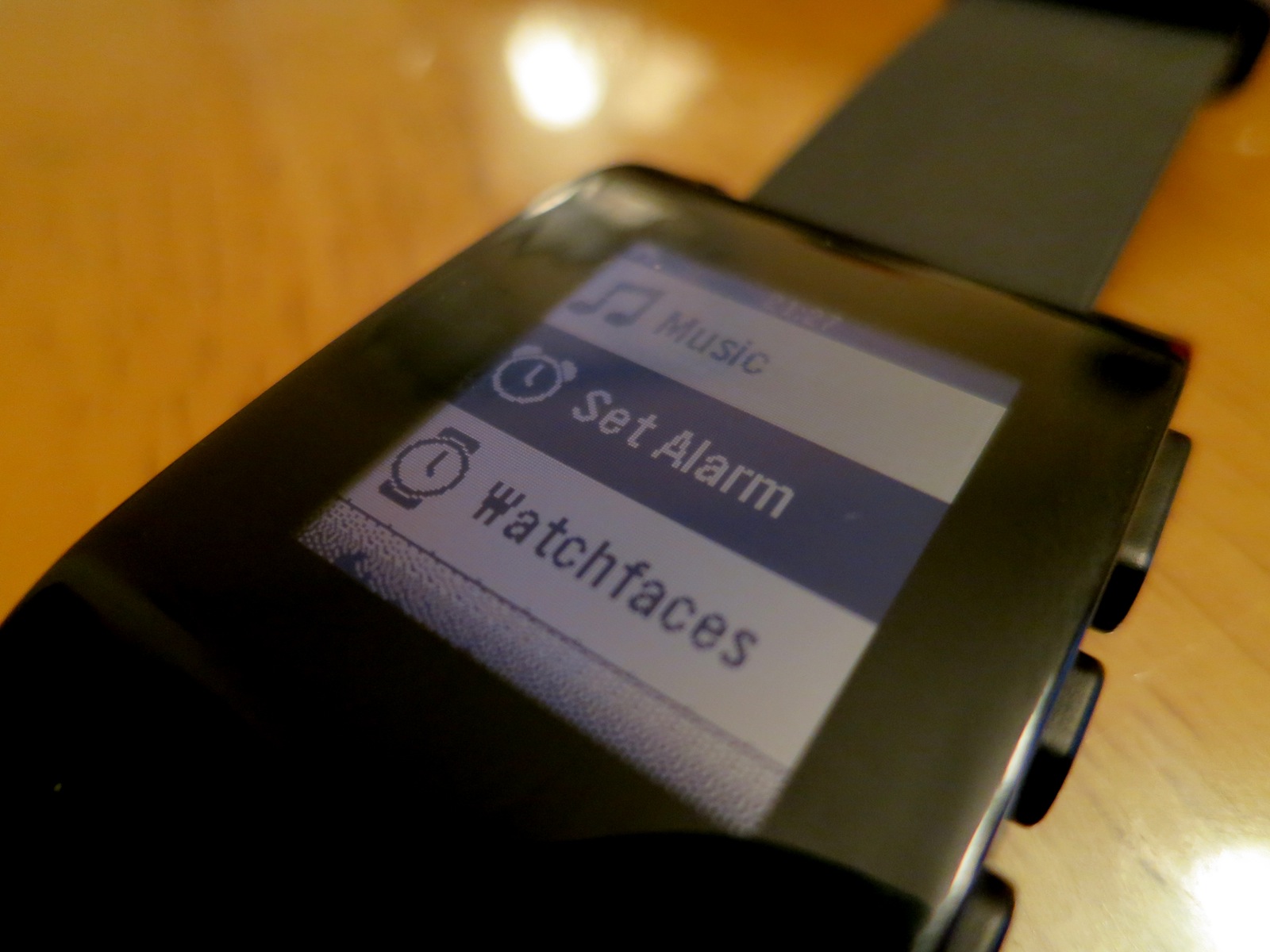 The backlight is a cool white, and works well, but there’s no brightness setting to be found.

Inside, the Pebble packs a vibrating motor, which is great, and a battery that can last a week. I haven’t had it long enough to test it, but since the Pebble UI doesn’t show the battery percentage anywhere, I haven’t found myself worrying about it. Once the watch gives me a low-power notice, I’ll charge it up via my MacBook Pro.

All in all, the Pebble’s hardware is nicer than I was afraid it might be, but it’s far from perfect. It is, however, passable. 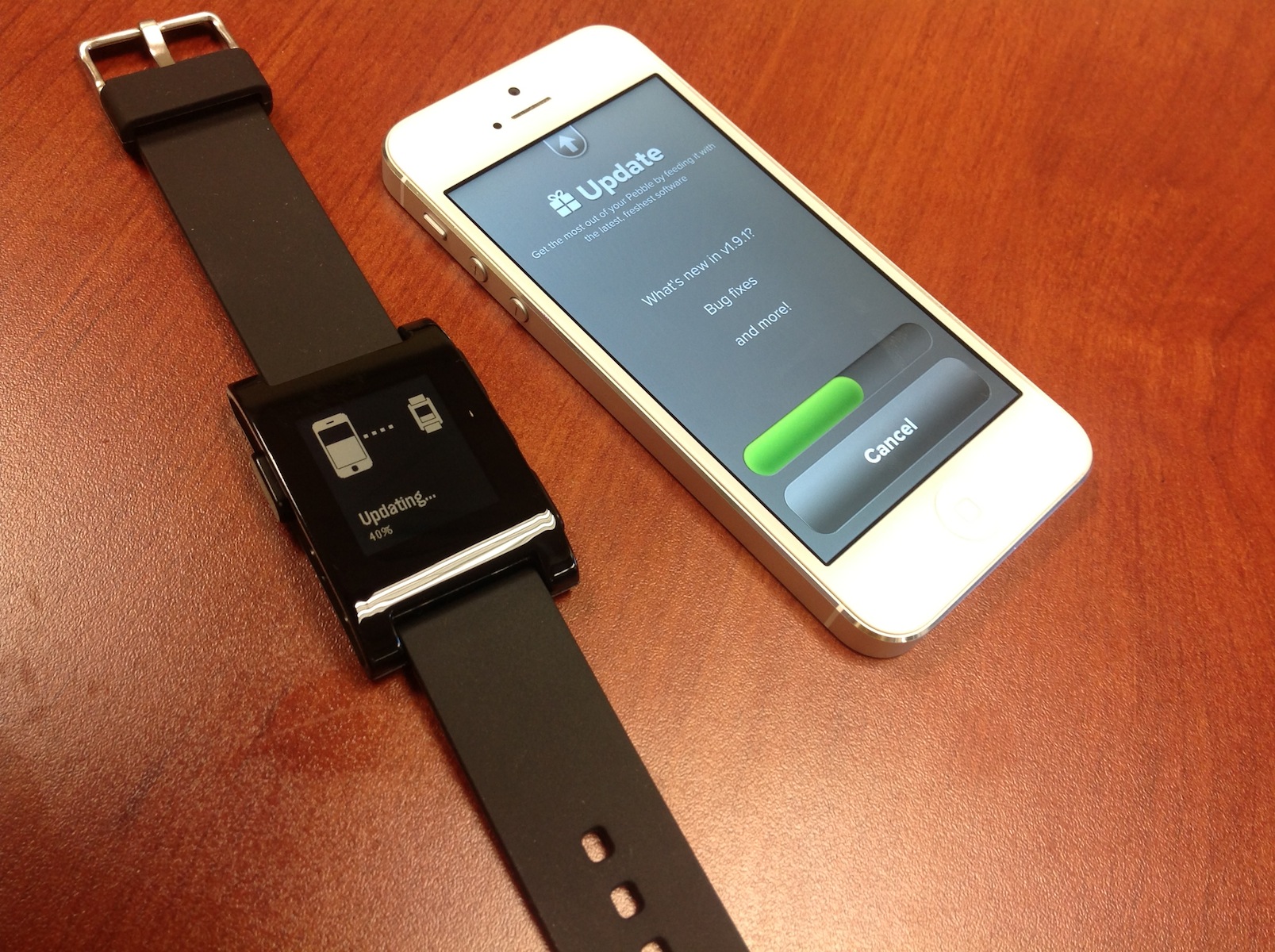 I’m ashamed to report I took that photo with my iPad. Even though I was alone in my office, I was embarrassed to do it.

The software on the watch is pretty simple. Changing watchfaces is easy, and additional ones can be added via the Pebble app. Alarms can be set quickly, and the font size can be changed easily. Past that, however, there aren’t any settings for the thing.

While Pebble has promised that apps are on the way, at this point, there aren’t any available for download. Not a single step tracker or game. Being able to use the Pebble to track my steps throughout the day would be a killer feature, and put the watch on par with something like the FuelBand by Nike. Pebble says RunKeeper is in testing now.

The real magic happens when the Pebble is paired to a smartphone.

Getting the Pebble set up with iOS is a little fiddly, but it’s not too bad. 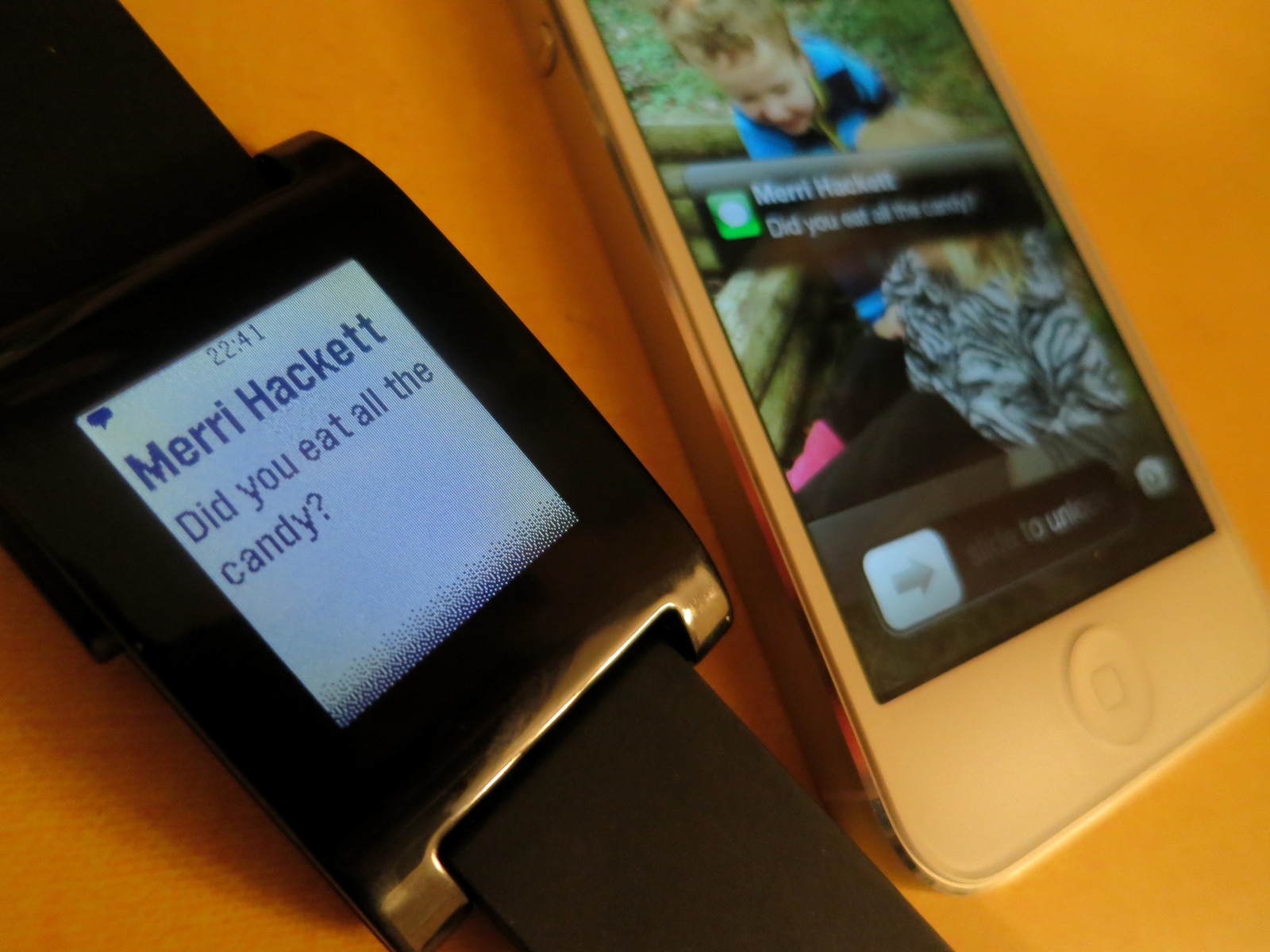 When a notification comes in, it pops up on the screen, staying there until it’s replaced by a newer message or is cleared by the press of a button. Keeping the watch and phone connected all day does impact battery life on the iPhone. While it isn’t draining my iPhone drastically faster, it is a noticeable change.

(The low-power Bluetooth 4.0 standard is supported by the Pebble’s hardware, but is not currently enabled.)

While it’s great to read things as they come in by just glancing at your wrist, having Siri built in to the watch would make it possible to respond to a text without pulling out your iPhone. If Apple’s really doing a smartwatch, I hope this is a feature.

As I’m sure you’ve noticed, iOS doesn’t have a notification setting to “send to Bluetooth” anywhere. To grant an app’s notifications the ability to be pushed to the Pebble, you have to disable then re-enable the notification. It’s clunky, and made worse but the fact that when the Pebble and iPhone lose connection, the Pebble has to be re-setup.

(Pebble’s support says that SMS notifications will stay enabled, but in my testing, that’s been flaky.)

This means turning off the iPhone, flipping it to Airplane Mode or simply leaving it on your desk when you go to lunch means your phone will forget what its supposed to do. Or leaving your watch inside when you mow the grass. Or leaving your phone in your bag when you workout. Or do anything a normal human does, really. It blows.

Assigning the blame for the issues is hard. While it’d be easy to blame Apple for these limitations in iOS 6, the fact is that the Pebble is pushing the bounds of what anyone has done with iOS, and things are rough because Apple hasn’t needed to explore things like notification settings to Bluetooth devices.

The Pebble also acts as a remote to any media playing on the iPhone. In my testing, the controls work great with the Music app, Spotify, Instacast and more: 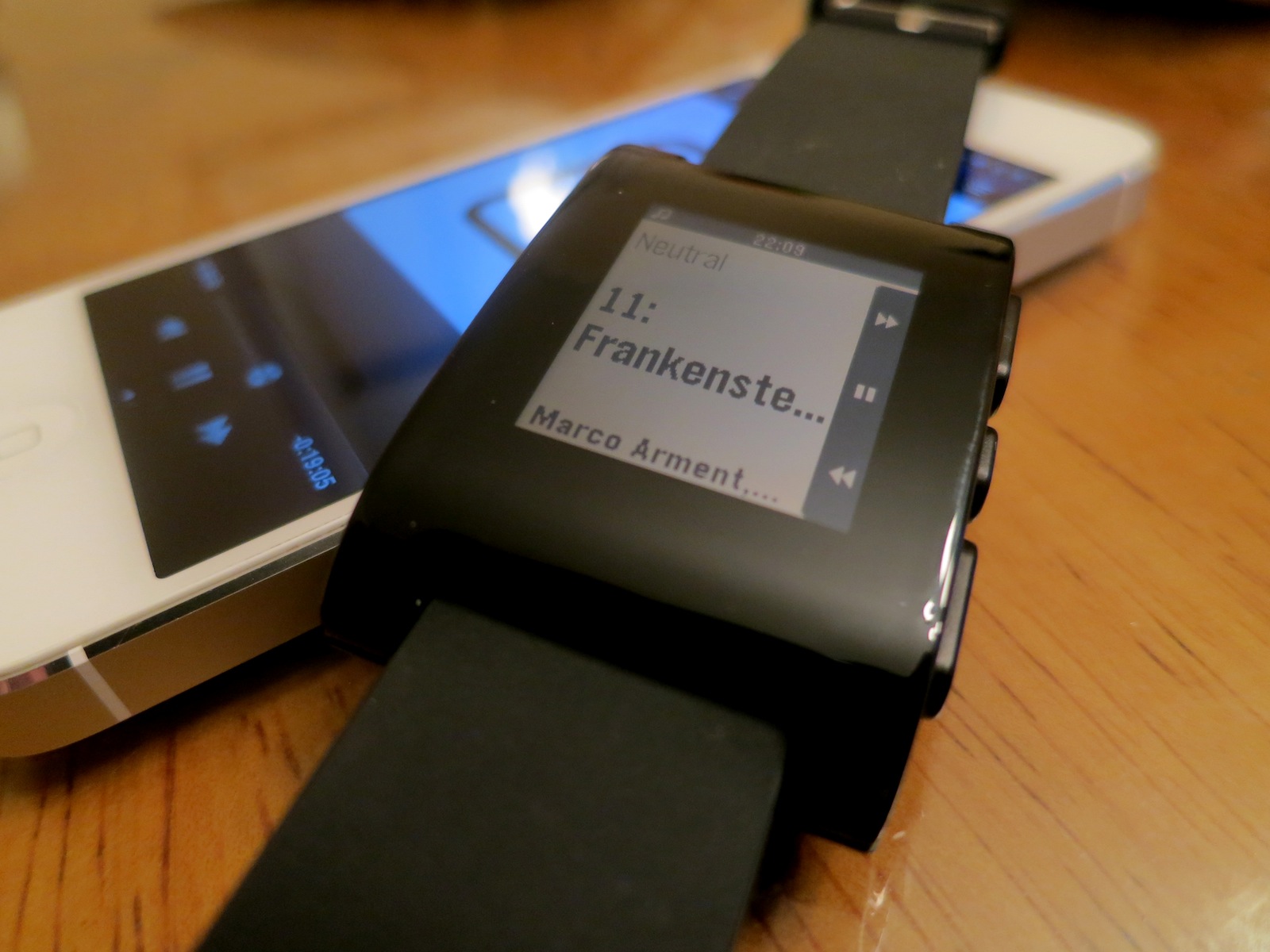 So, was the long wait for the Pebble worth it?

When I reviewed the iPod nano as a watch last year, I closed my article this way:

The promise of the iPod nano as a watch is endless. Lots of people would love to see Apple integrate it with the iPhone, giving the nano a true “smart watch” level of usefulness.

As it stands today, though, the iPod nano makes you look like a secret agent, but one who can’t actually do anything all that cool.

As it stands today, I won’t be wearing the Pebble all that much. I might not even keep it. It’s ahead of its time, and while it shows promise, the simple truth is that the Pebble isn’t all that helpful at this point.

Can the team behind the Kickstarter darling fix that with software? Will Apple open the door to Bluetooth-powered notifications? Will the next Pebble’s hardware be something I’m not embarrassed to wear?

The Pebble is like the Model A. When people looked at the Model A, some realized it was the future, and that one day, everyone would drive. Others thought Henry Ford was off his rocker and that his invention was a one-off that wouldn’t ever go anywhere.

The Pebble isn’t great out of the gate, and it may never have the chance to cover the ground it needs to before Apple swoops in. The idea of the smartwatch is cool, but the Pebble is rather simple and — in places — downright crude. But it’s pointing the way forward.