Apple’s new Mac Pro looks like a stunning machine. Small and quiet, yet insanely powerful, the new computer makes every other desktop for sale today look and feel ancient. However, when I think about the new Mac Pro, I can’t help but think of one of my favorite Macs in recent history: the Power Mac G4 Cube. 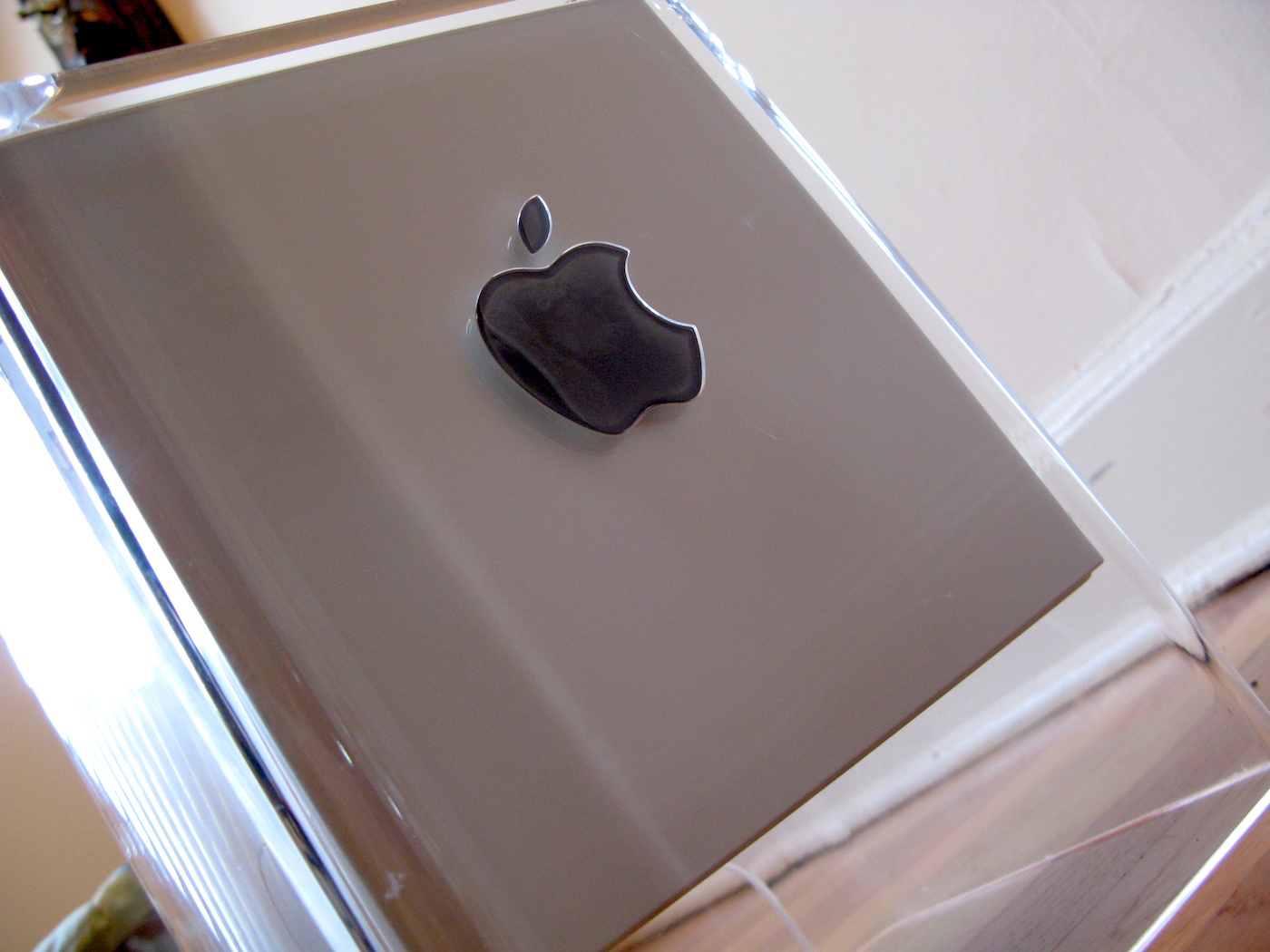 This Cube happens to be mine. It’s a 450 Mhz entry-level model. The thing still boots.

Introduced in 2000 as a more expensive (but less powerful) alternative to the Power Mac G4 towers on sale at the time, the Cube ultimately did not sell well and was discontinued less than two years after launch. I am not suggesting the new Mac Pro is doomed to share the Cube’s fate, but as an Apple nerd, I can’t help but be reminded of the only modern Macintosh that flopped when I see the new machine. Here are three parallels that came to mind.

The new Mac Pro also weighs 11 pounds, but sits at 9.9 inches high and has a diameter of 6.6 inches. Those are so close it doesn’t really make a difference, and while it helps me put the new machine into perspective, most people don’t have a Cube handy. 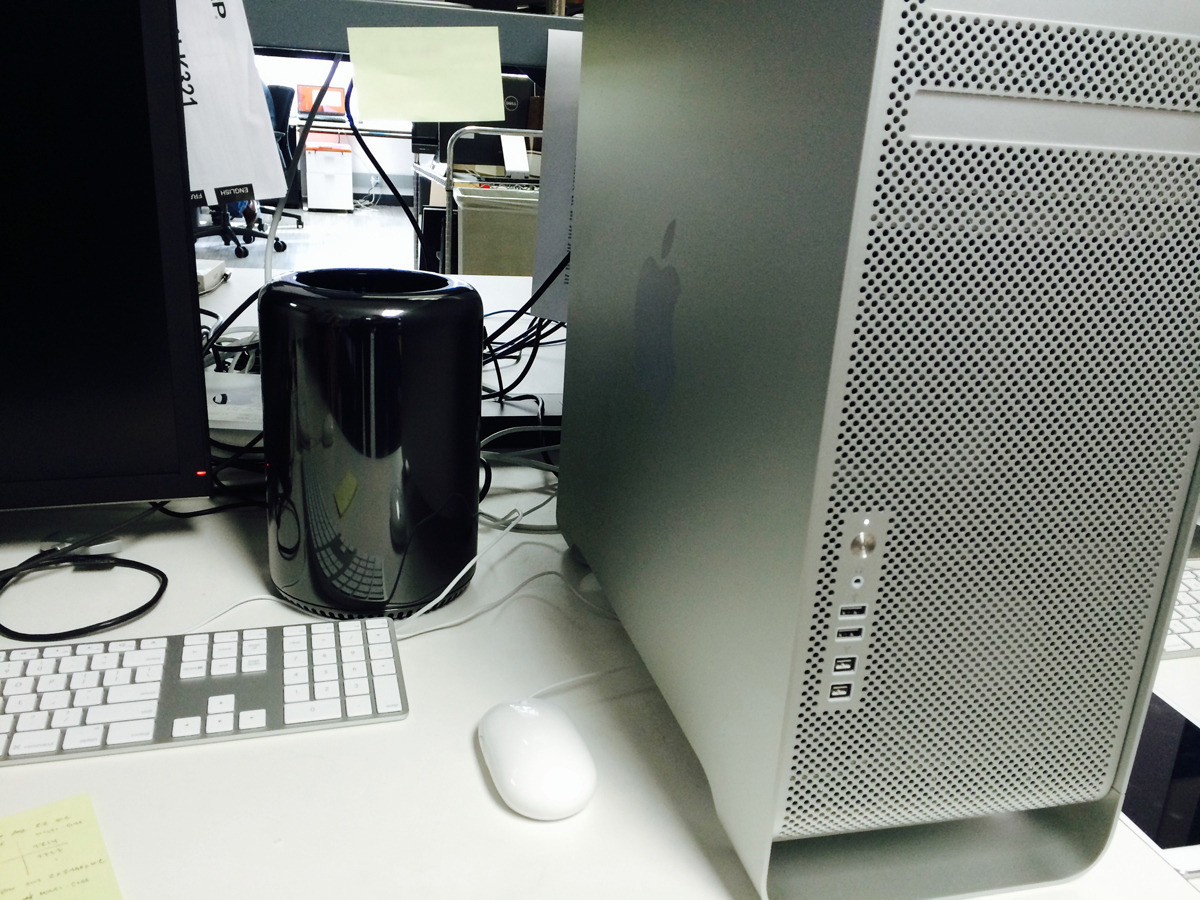 Pretty crazy. Why did computers have to be so big in the past?

Here’s how Apple described the “unified thermal core” at the center of the new Mac Pro:

The new Mac Pro packs an unprecedented amount of power in an unthinkable amount of space. A big reason we were able to do that is the ingenious unified thermal core. Rather than using multiple heat sinks and fans to cool the processor and graphics cards, we built everything around a single piece of extruded aluminum designed to maximize airflow as well as thermal capacity. It works by conducting heat away from the CPU and GPUs and distributing that heat uniformly across the core. That way, if one processor isn’t working as hard as the others, the extra thermal capacity can be shared efficiently among them. No computer has been built this way before. And yet it makes so much sense, it’s now hard to imagine building one any other way.

Actually, at least one other computer has been built that way.

While the Cube didn’t have a fan, the chassis — which slide out of the case using a handle — was built around a central core: 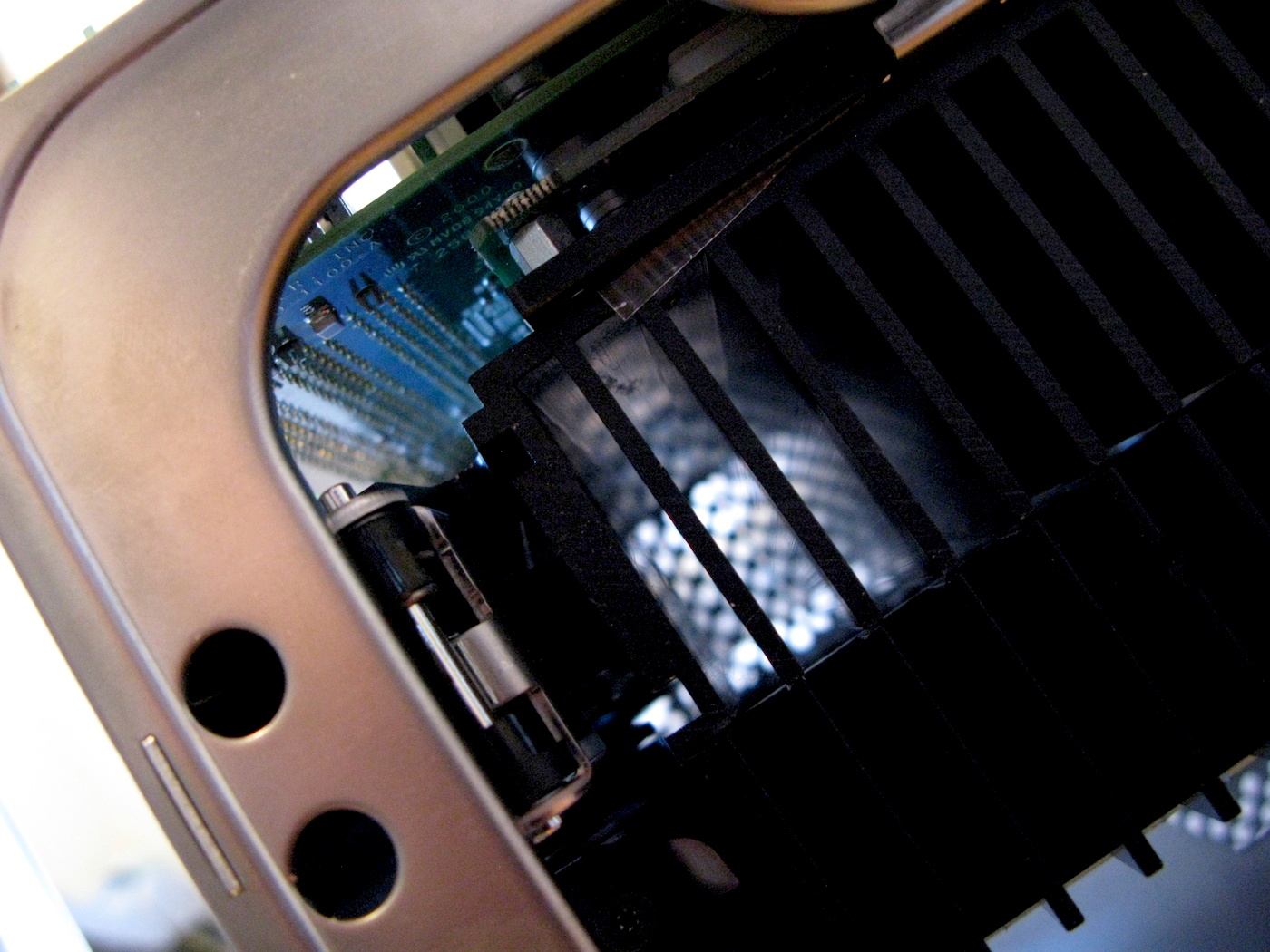 As that photo shows, the Cube’s Central core ran top to bottom, exiting the top of the computer. The concept should seem familiar: 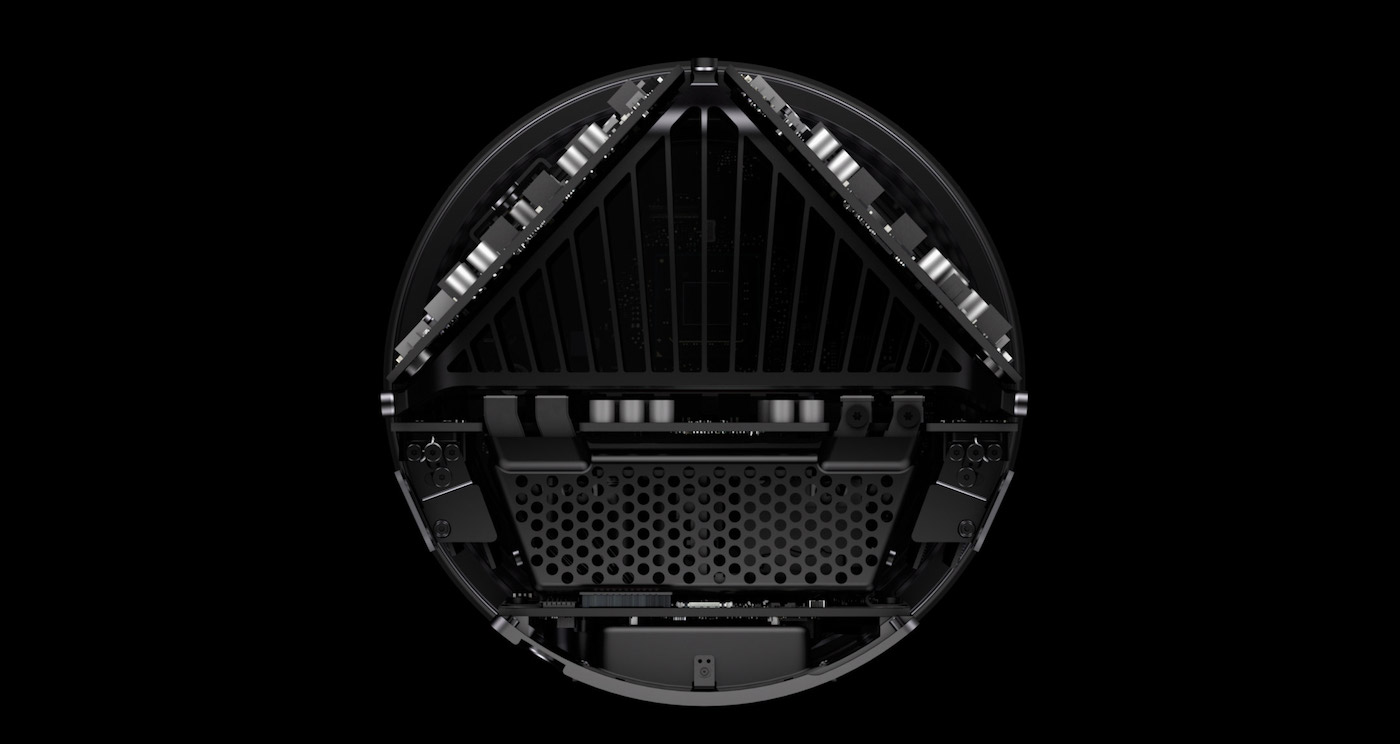 Apple considered the Cube — and now considers the Mac Pro — as computers meant to sit on a desk, not under one. A big consideration with tower placement is noise.

While the Mac Pro does have a fan, Macworld reports that the machine near-silent:

In normal use, it’s nearly silent: If you put your ear next to the vent on the top (which is right above the fan), you hear only a very quiet hum. And during an Apple demo, a high-end Mac Pro, complete with upgraded processor and graphics cards, was live-rendering multiple 4K videos, and we couldn’t hear the fan over the normal room noises.

While it’s matching Cinema Display had a pair of USB ports on the back, all of the Cube’s I/O was found underneath the machine, in the space between the core and the desk: 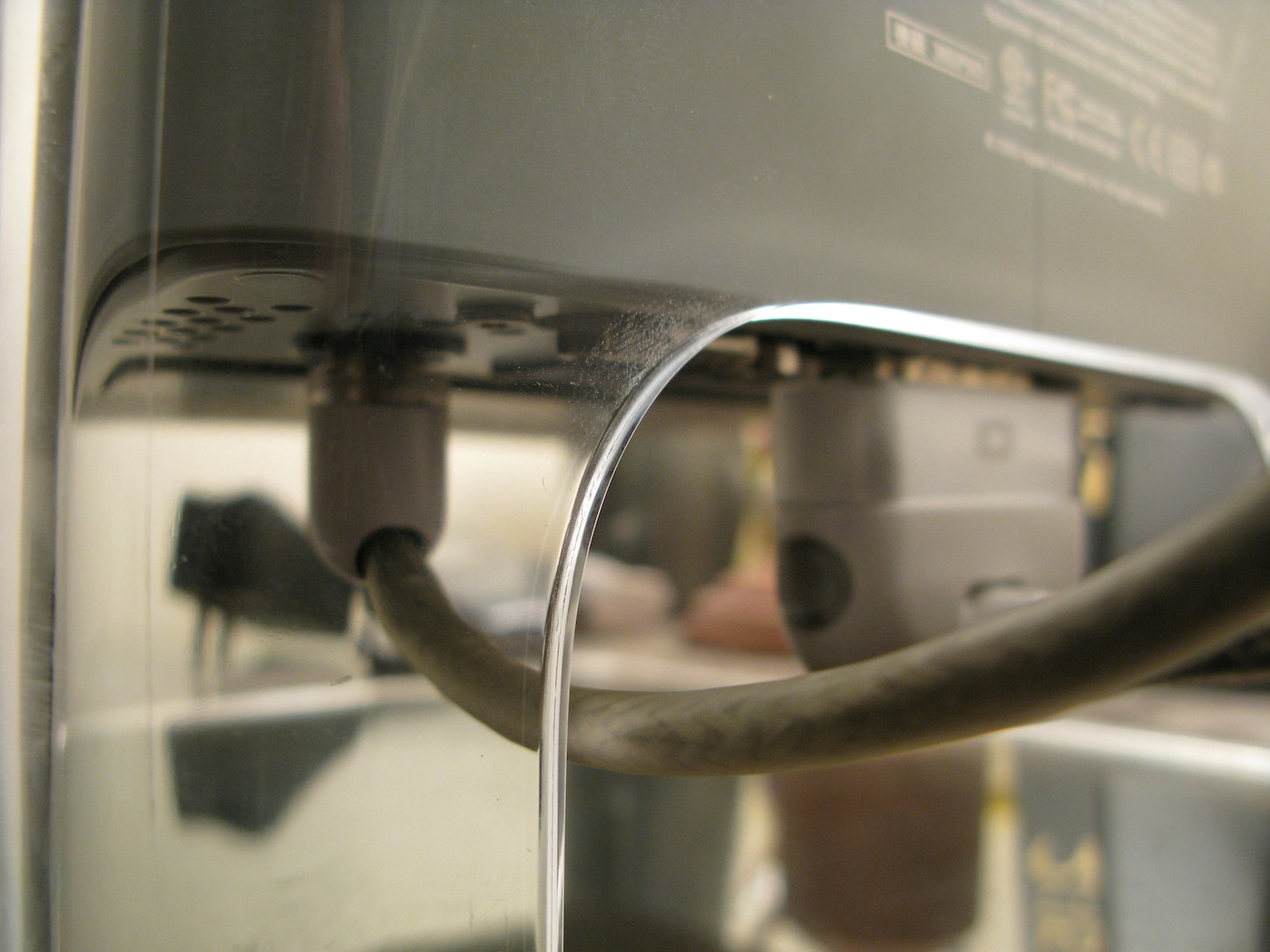 While this made for nice visuals and clean desks, many users became frustrated with having to turn their computers over to plug something in.

While the G4 towers had all of their ports at the back, the Power Mac G5 and cheese-grater Mac Pros included several ports on the front, making it much easier to temporarily hook something up.

With the new Mac Pro, Apple’s take a step backwards in this area. While the area around the ports light up, all of the I/O is on the back: 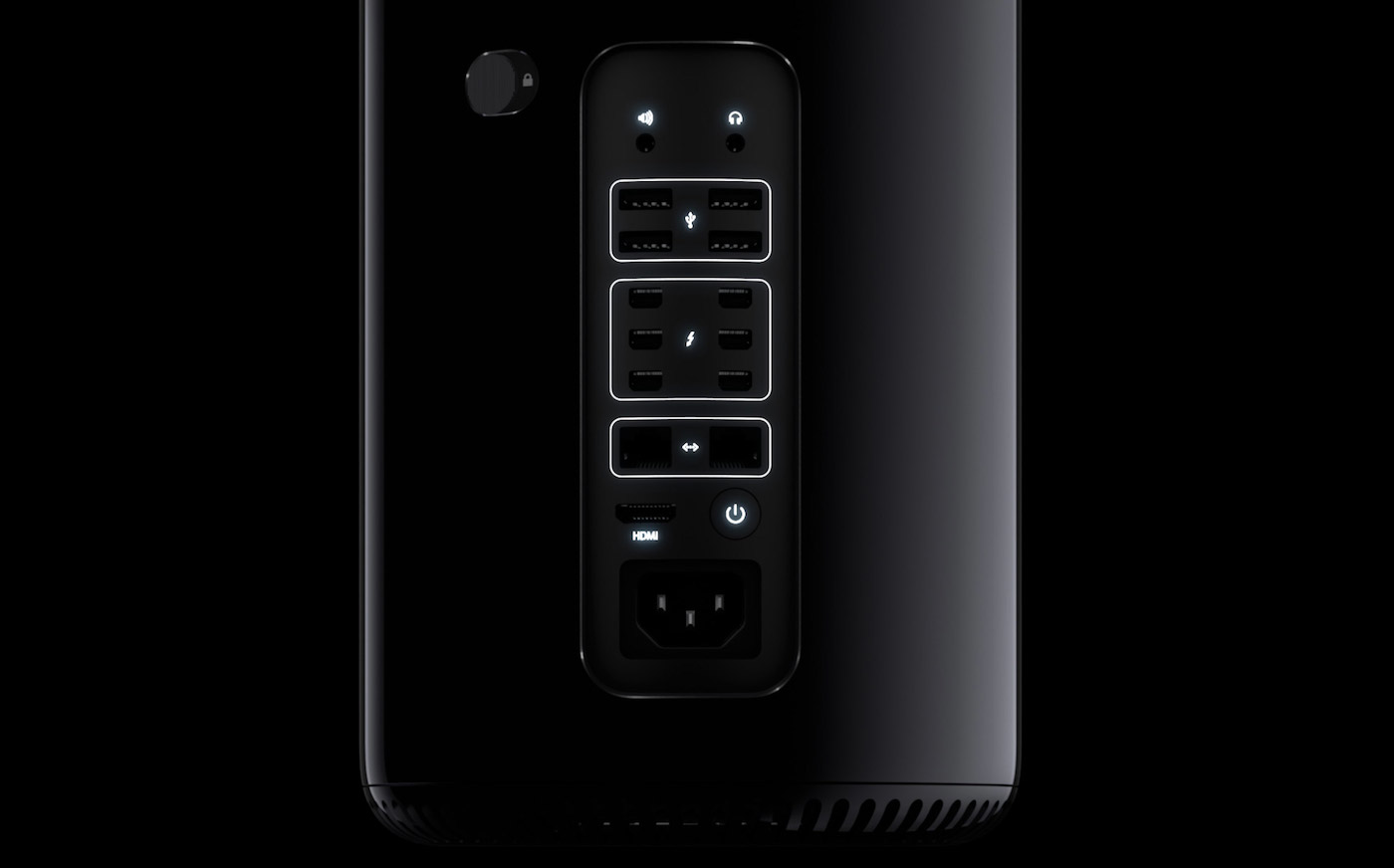 While this arrangement may lead to tidy workstations — which I’m all for — it comes at a cost. Here’s Macworld again:

Apple’s videos, and in-person demos, show how easy it is to rotate the Mac Pro to access those ports and connections. We quickly discovered that in real-world use, it’s not always such a seamless process: If your cables are too short, you’re stuck reaching behind the computer (or unplugging those cables first), just like old times.

I don’t think this setup will be as annoying as the Cube, and I’m not sure how Apple could have done things differently here, but I imagine a lot of disks are going to be disconnected without being ejected thanks to this.

Unlike most Apple products these days, the new Mac Pro enters this world with a set of quirks. While the design (and construction) is certainly interesting (and really shiny), Apple is revisiting some ideas it has played with in the past. That’s not a bad thing, and if the Mac Pro succeeds, I expect to see some of the design elements here filter down to other computers in the future.

That said, I think the new Mac Pro is going to do well. It’s by far the most powerful Mac ever built and is reasonably priced. While there may be some pains while the world catches up to Thunderbolt (and 4k-ready machines), I think these machines will become the go-to rig for many professionals.