In my “Future Classics” series, I try to guess what current-era Apple products may become collectable in the future. My hobbies are admittedly weird.

Announced in 2006 to replace the iBook G4, the MacBook was an entirely new machine.

Powered by an Intel processor, the notebook featured a 13.3-inch glossy display and an unique chiclet-style keyboard in an all-new new case that was thinner than the 12-inch[1] and 14-inch[2] iBook before it.

In addition to the white plastic that was all the rage in 2006, the MacBook could be purchased in a different color as well: 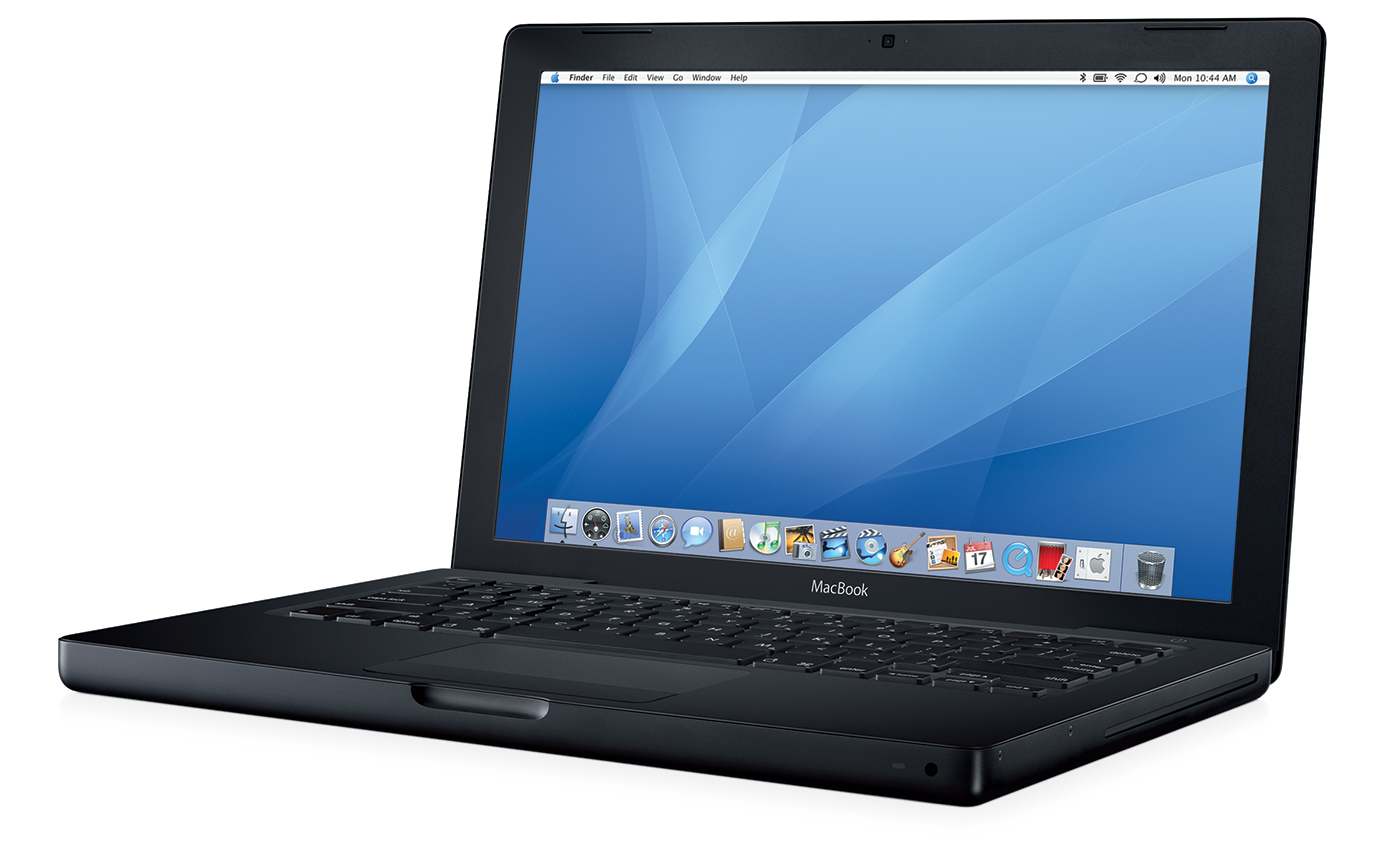 By any metric, the MacBook was a huge success. It brought Intel processors to Apple’s consumers in a way that the iMac or MacBook Pro couldn’t. Here’s a bit from Apple’s press release at the time:

“Apple began the transition to Intel Core Duo-based notebooks in February with the 15-inch MacBook Pro, and now just 90 days later we have completed the transition with the release of the all new MacBook,” said Philip Schiller, Apple’s senior vice president of Worldwide Product Marketing. “The complete MacBook lineup leads the industry with Apple’s trademark innovative design and advanced mobile features—from top to bottom it is the best notebook line that we have ever offered.” 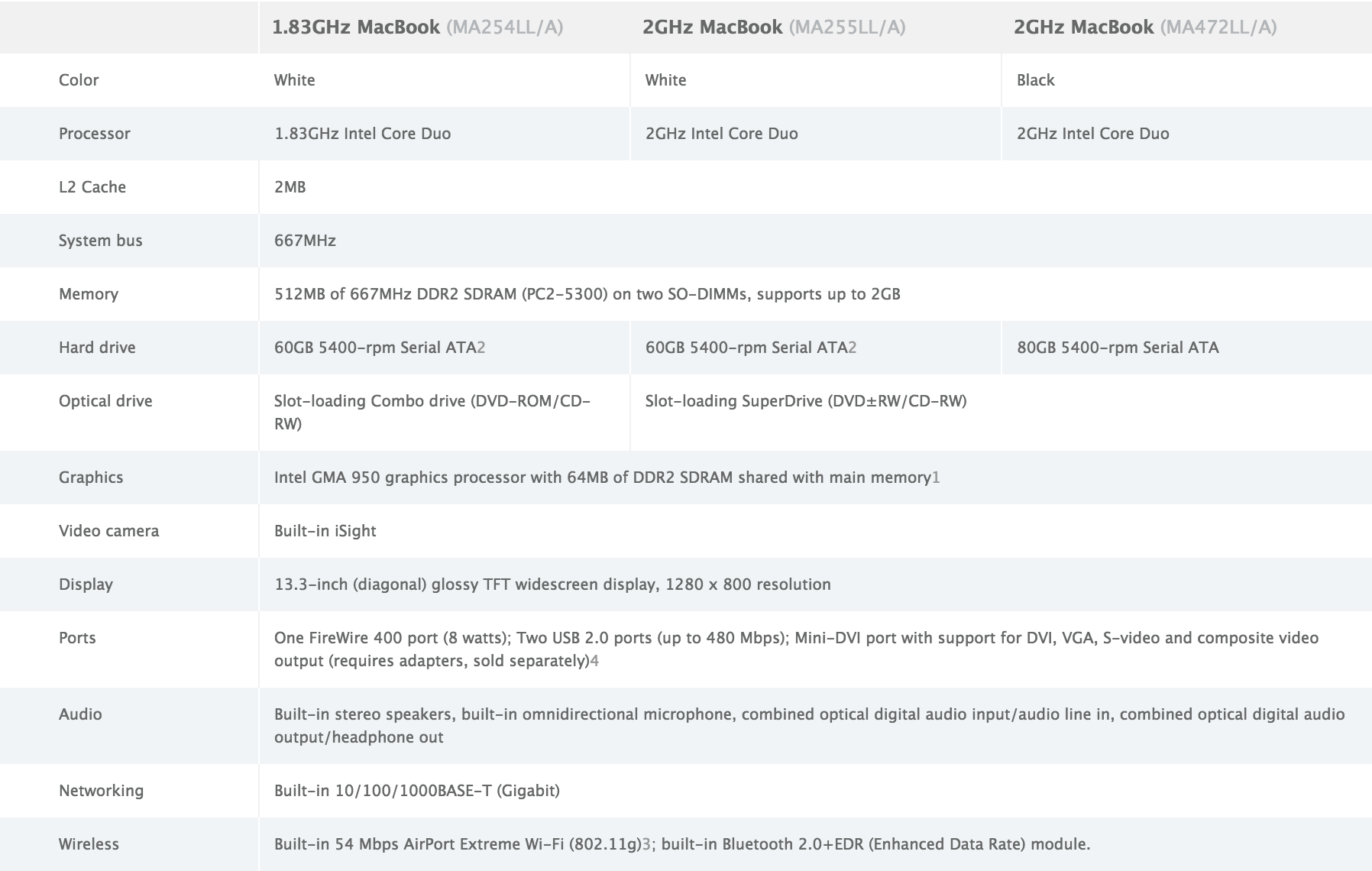 At $1,499, the black model was exactly the same machine as the white one with the difference of a larger hard drive. As $200 for 20 GB of storage was viewed as robbery, the machine’s price earned a nickname: the so-called “black tax.”

Here are a couple of reviews from the time:

And though from a value perspective, the black model isn’t as good a deal as the others, the cool black color will be enough for some people—those who want something different, own a black iPod, or need a more professional-looking laptop for work—to justify the cost.

An oft-bandied-about factoid is that if you were to configure the midlevel model to ship with an 80GB hard disk to match the high-end model, you’d still notice that it’s approximately US$150 cheaper. The only difference is the color and finish of the shell, of course (white is glossy and the black has a matte finish). This is undoubtedly done on purpose and is the direct result of Apple’s experience selling iPod and iPod nanos in two color options. It didn’t take long for Apple, and casual observers of Apple’s operations to notice that the black models were selling out faster. A lot faster.

Obviously the demand for black Apple products is much higher than the white products, and Apple is simply responding as most companies would when faced by high demand for a product. People who are set on getting that black MacBook are going to have to wrestle with the US$150 mark-up. Apple is banking that most people will willingly hand over even more cash to get a unique item. It sucks for people without the extra moolah to blow, but it doesn’t take long to come to the realization that it’s just a different color and that you’re going to be saving a nice chunk of change by going with white.

While the early MacBooks had their issues, the black ones faired a little better, at least when it came to case chipping. The black plastic used was a little more rubbery than on the white machines, and it served them well.

While I wouldn’t own a plastic MacBook until the very end of its original run (and only then, it was temporary), I coveted that black case.[3]

Over the course of the MacBook’s life, the black model remained at the top of the line, but never with a big enough technical advantage to justify the cost. Even maxed out, it carried a premium over the white models:

@ismh you could configure a white macbook with same specs as a black one and it was $50 more. I paid it. Still a great Mac but stuck at 10.7

Just this week, there has been a lot of talk about the possible pricing of the gold Apple Watch. While the premiums on the Watch are going to be far larger than on the MacBooks of yesterday, the same principle is at play: Apple often charges more for things like color.

So, why does the black MacBook deserve to be the considered a future classic?

While Apple has shipped several black models over the years, the MacBook was by far the most successful. However, in the light of the truckloads of white models sold, it is rare to a degree.

More than the rarity, however, I think the black MacBook really helped set the stage for modern Apple to charge more for a design element.

Plus, they just look so damn cool.