This article is written by my friend Thomas Brand, who blogs at EggFreckles.net.

Apple released four distinct Newton form factors containing eight different models between August 1993 and February 1998. Each form factor was an evolutionary step forward for the platform, and introduced design considerations and features that were different from past and subsequent models. Choosing a Newton requires understanding each models benefits and weaknesses and applying that knowledge towards selecting the Newton that best meets your requirements.

The OMP (Original MessagePad) was unveiled and released on August 3, 1993 at MacWorld Boston. It’s release was somewhat premature and it is referred to by some Newton faithful as the ‘grand public beta test’.

Source for all block quotes: msu.edu

Despite having similar technical specifications as later Newtons the OMP is limited to the kind of personal information management we attribute to yesterday’s PDAs or today’s most rudimentary mobile phones. Names, Dates, To Dos, Notes, and the ability to send simple faxes and emails are the OMP’s killer features, but its premature software, and inadequate cursive handwriting recognizer Calligrapher, limit its usefulness as a MessagePad.

Unfortunately Calligrapher the word-based handwriting recognition engine in the Newton which was developed by the Soviet programmers at Paragraph International Inc. got more attention for what it couldn’t do than what it could.

Being a word based recognizer Calligrapher can only decipher words that are in its dictionary and even then it has to be trained for several weeks before it gets proficient. Using an Original MessagePad for taking notes often requires adding unknown words to the dictionary and rewriting them several times before the OMP can decipher them correctly. Things got better one year later with the release of the MessagePad 100 which added individual character recognition, but both MessagePads are limited by their early software that can’t accept many later Newton applications.

The golden screen color, graceful curves, and soft touch casing of the Original MessagePads make these two models some of the most attractive Newtons ever made. But real work on a MessagePad requires real character recognition, and these original MessagePads just don’t offer the versatility or the recognition to make them anything more than collector’s items.

In March 1994, at the same time the MessagePad 100 was released, Apple updated the Newton form factor with the introduction of a new model. The MessagePad 110 offers improved portability over the Original MessagePad with a smaller display and flip over screen protector that resembles the front cover on a reporter’s notepad. The stylus was redesigned into a more familiar round shape, and internalizing the holster started a trend that made all subsequent MessagePads thinner and more comfortable to hold. The 110 shipped with the same limited Newton OS 1.3 software as the MessagePad 100. 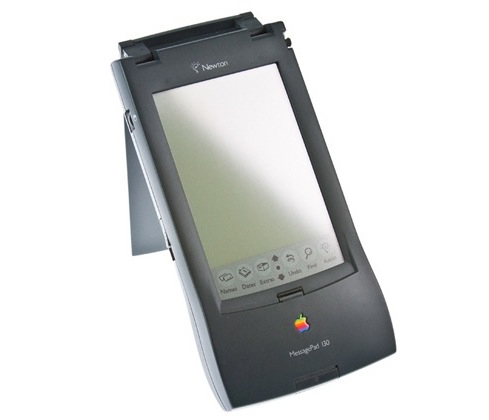 The printed recognizer in OS 2.0 was flawless and required no dictionary or learning period. It worked with familiar and strange handwriting styles alike. It only required separated printed characters to analyze. Even today, its recognition system is unmatched in the computing industry.

Other additions that made it into OS 2.0 include Ink Text, the ability to write and format natural unrecognized handwriting. A text expand feature that allows predetermined shortcuts to be automatically expanded into full length text. The ability to rotate the display into a landscape orientation, and compatibility with an optional external keyboard. Even the the most basic applications like Notes gained custom stationary, and Names gained user defined fields. So many improvements came with Newton OS 2.0 that I can’t recommend choosing a Newton without it.

The MessagePad 130 is my recommendation for a Newton from this form factor. Not only does it sport the comfortable size of the 110, and 120 but it is guaranteed to ship with Newton OS 2.0, an extra 512k worth of memory, and over 78,000 new words in its Calligrapher dictionary. It may not have the soft touch casing of the Original MessagePads, but it does have a textured screen with a backlight that is more pleasurable to write on; even in the dark.

Starting with the MessagePad 2000, the Newton was no longer just a personal information management device with messaging capabilities. It could now perform basic multimedia tasks including displaying greyscale photographs, and playing simple melodies over its internal speaker.

Of course all of these additional capabilities require a large improvement in performance, and the MessagePad 2000 got it with a 162MHz StrongARM 110 RISC chip that puts out 150 MIPS (@400 MIPS/watt).

The previous Newtons all had 20MHz ARM RISC chips that ran at 15 MIPS (1/10th the speed) and 100 MIPS/watt thus using 4 times as much power. The net result of the StrongARM chip is an unbelievable ten fold increase in speed with 1/4 the power usage.

Although both MessagePads shipped with Newton OS 2.1 and greatly improved performance, a 2100 or upgraded 2000 is the Newton to get if you want to experience the most of what the platform has to offer. The additional memory is practically a requirement for internet browsing and multitasking, and because these were the last MessagePads released they have the hardware specifications required to experience the entire back catalog of Newton software.

The eMate 300 is Apple’s first and only non-MessagePad Newton with a built-in keyboard. The eMate 300 was designed to take the rugged lifestyle of a K-12 education. For example the eMate’s keyboard has no circuitry hidden underneath to avoid damage from liquid spills, and its protective casing is designed to withstand drops from a student’s hands. If the screen or keyboard is damaged, both are designed for easy removal and replacement.

The screen on the eMate 300 has the same number of pixels but is slightly larger than the MessagePad 2000. And its built-in keyboard adds a row of function keys along the top which replace the button bar and provide one-touch access to built-in applications and common commands such as Close and Backlight On/Off.

The eMate 300 makes a great first computer for a child, but its underpowered 25MHz processor and traditional clamshell design offer few benefits over a older model laptop.

My first Newton was a MessagePad 130 and I fell in love with its ease of use, character recognition, and slender form factor. In my opinion no other Newton is better for quick portable note taking. Later models such as the 2100 are far more versatile, but their features pale considerably when compared to modern devices like the iPad. If you are looking for a first Newton that will do everything the platform has to offer get a 2100. But if you are looking for the optimal MessagePad to do what a Newton does best, Note taking, a MessagePad 130 is the smallest device you will find with real hand writing recognition.