This announcement mirrors the original Macintosh introduction in several ways. Both times, Steve Jobs was unveiling a consumer machine for the masses with a friendly, all-in-one design. Both introductions took place in the Flint Center, and each greeted the audience with a cheerful “Hello” on the screen.

Jobs outlined the vision behind the computer in simple terms:

The excitement of the Internet. The simplicity of Macintosh.

The iMac was more than a mere computer; it was designed to be a vessel with which users could travel to the 21st century. The i in the name stood for several things: 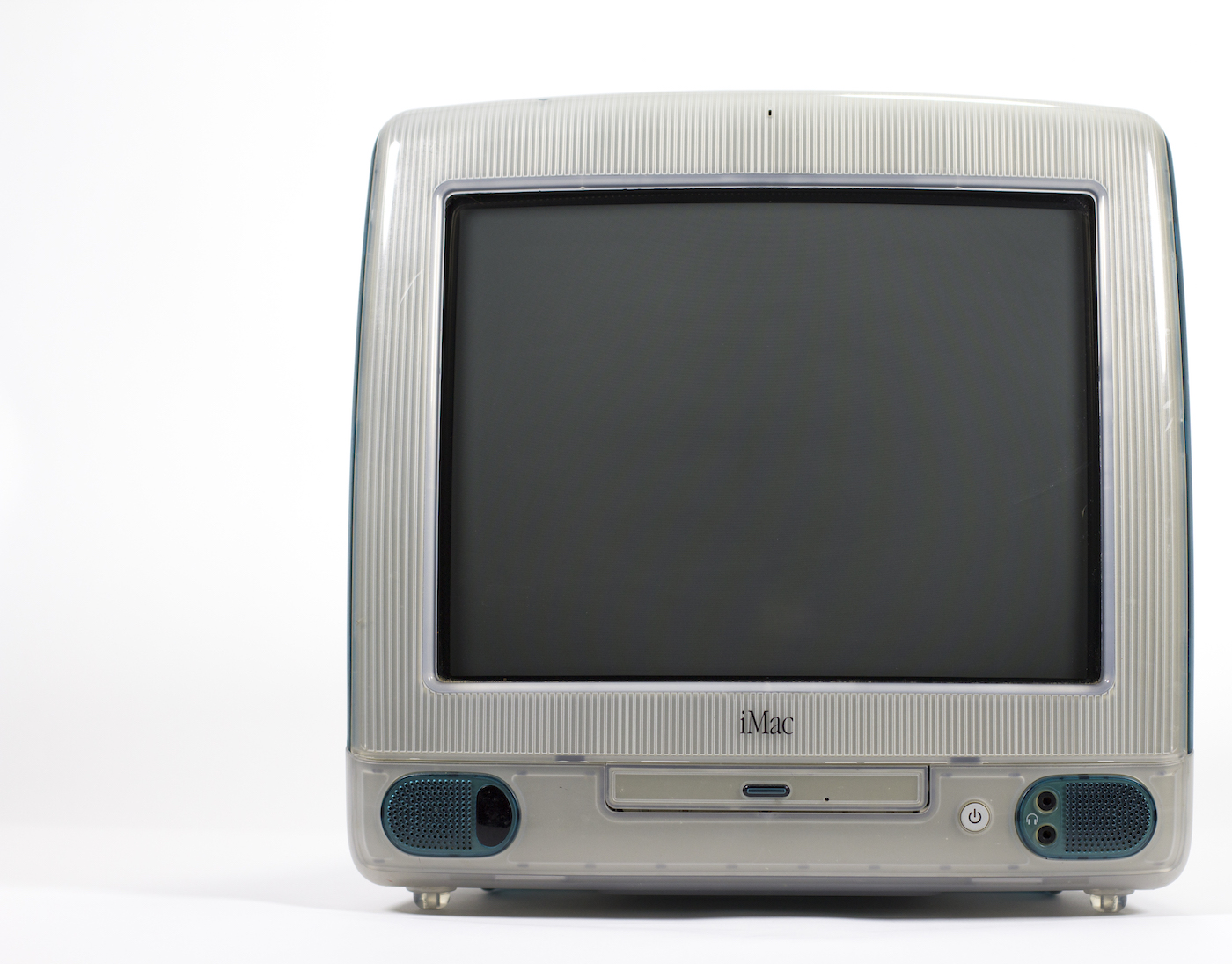 Jobs described the machine as better than PCs in terms of speed, design, I/O and display size. The 233 MHz G3 was coupled with a 15-inch, 1024×768 CRT display. It shipped with a modem, Ethernet port and an IR port, but the real I/O story came in the form of USB and the lack of a floppy drive. Gone were the legacy Apple ports like ADB, and the only disc that the computer could read was a CD.

The lack of a floppy drive wasn’t mentioned in the keynote, but soon became a point of contention among analysts and even users, as was the dropping of legacy port in favor of USB.

Here’s Andrew Gore and Anita Epler for Macworld in May 1998:

Considering all these amenities, the most shocking part of the iMac isn’t what it offers, but what it lacks. The iMac has no floppy drive, which might be forgivable if there were a Zip drive or other removable-media option, but there isn’t.

And most dramatically, this new consumer offering has no SCSI port, no standard serial ports, and no ADB ports. Apple has opted to replace these familiar connections with USB, a high-speed serial architecture that has suffered from slow adoption on the Wintel platform despite its technical advantages. Currently, no USB devices exist for the Mac.

While it’s easy to smirk at this reporting now, it’s an important point. There were virtually no USB devices when the iMac was announced, and very few when it shipped a few months later. In the October 1998 edition of Macworld, just 28 USB devices were listed, and many of them were “coming soon.” Here’s Henry Bartman, closing his article about USB in that month’s magazine:

It seems like only yesterday that nobody had even heard of USB. But the Mac is moving to this new bus architecture, and the little iMac is leading the way. By this time next year, the Mac’s ADB and serial ports will be history, and USB (along with FireWire) will reign supreme.

That may seem like an overly optimistic prediction, considering the relative lack of available USB devices. But the iMac’s success-yes, this assumes that it will be successful-will cause hardware companies that have been waffling on the USB issue to finally take the plunge.

That’s basically what happened. Those users who bought iMacs sprung for new accessories, including USB floppy drives. In the June 1999 edition of Macworld, there was a 11-page spread highlighting USB devices on the market.

The iMac brought change not only to the tech Apple was shipping with Macs, of course. It changed Apple, and in a larger sense, the consumer electronics industry. Like the Macintosh before it, the iMac was Apple’s push in the future, bending the world to their vision of how computing should be. In 1998, that vision meant simple I/O and no floppy disks. That’s the world we live in today.

This machine would put an energy back into the Macintosh, and help pull Apple out of the nosedive it was in. It would bring new users to the platforms, help Apple regain ground in the education market, and lay the foundation for the computers and devices that would follow it.

Not bad for a weird little computer that only came in blue.