With rumors of an Apple Music refresh making the rounds, there’s been a fresh crop of iTunes Ping jokes.

So, let’s talk about Ping.

Announced as part of iTunes 10 in September 2010, Ping was a music-oriented social network.1 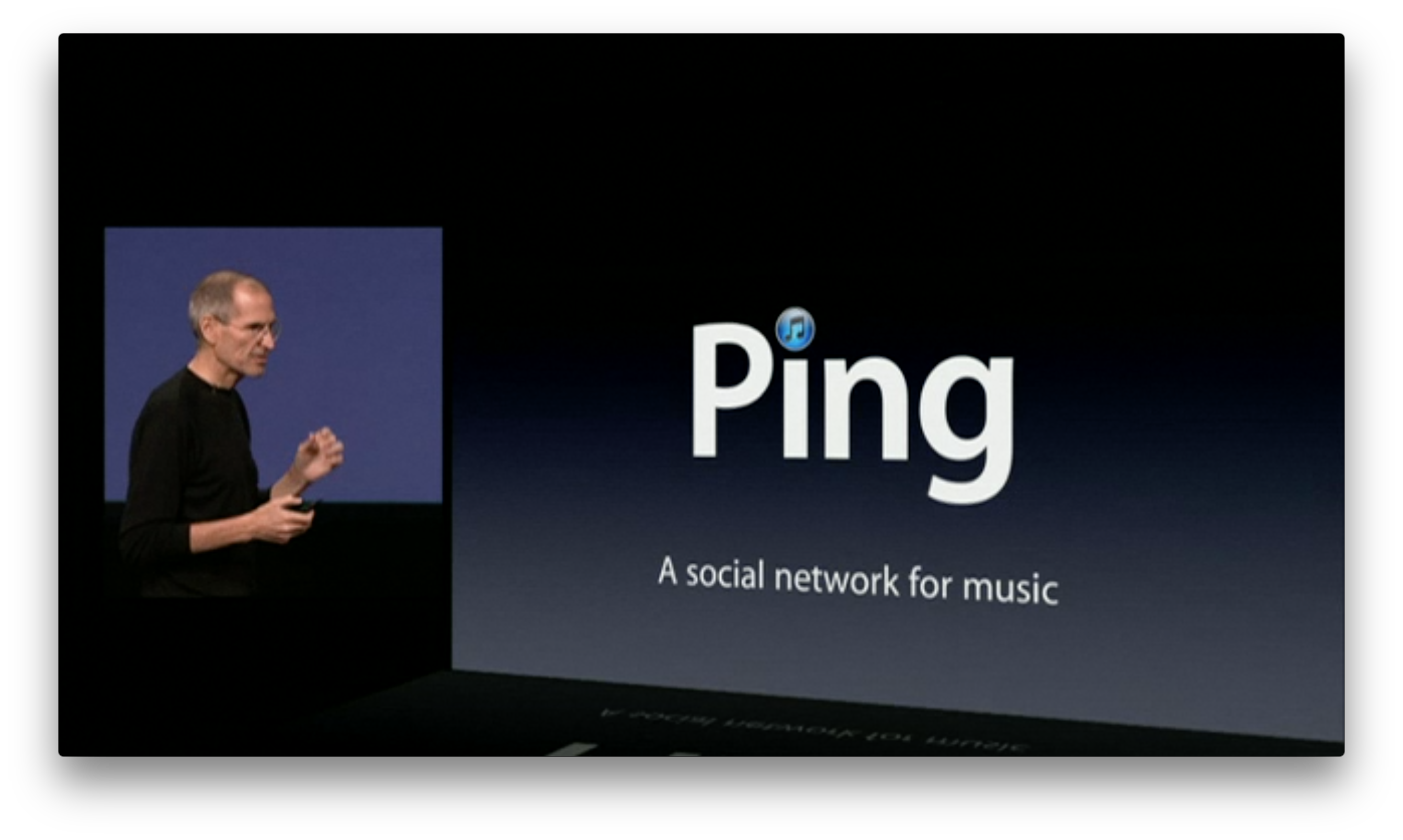 Steve Jobs highlighted the features during the keynote:

Follow your favorite artists and friends to discover the music they’re talking about, listening to and downloading.

Ping was built into the sidebar in iTunes 10. Opening it would reveal a new UI within iTunes that looked like a mix of Facebook and Twitter. Posts from people you were following would appear, alongside Top 10 Charts built specifically from what people and musicians you were following were downloading from the iTunes Store. Concert information could be viewed as well if you were viewing an artist’s page; if you were viewing a friend’s page, you could see what concerts they had expressed interest in attending.

Ping was also included in a new pane on the right-hand side of the UI. This sidebar showed a mini feed of the recent activity of the people and musicians you were following. If the song that was currently playing was by an artist on Ping, their latest activity would load in at the top. Songs could be liked and shared as well.

Here’s a video of Jobs giving a demo of iTunes Ping:

(iTunes Ping showed up on the iPhone and iPod touch as well, but Jobs didn’t really show that off.)

At first, it seemed to take off, according to Apple:

“One-third of the people who have downloaded iTunes 10 have joined Ping,“ said Eddy Cue, Apple’s vice president of Internet Services. “As many more people download iTunes 10 in the coming weeks, we expect the Ping community to continue growing.”

However, problems soon arose. While it was included in the demo given by Apple, Facebook support was removed from Ping shorlty after launch. Here’s Kara Swisher:

When I asked Jobs about that, he said Apple had indeed held talks with Facebook about a variety of unspecified partnerships related to Ping, but the discussions had gone nowhere.

[…]
Jobs did not elaborate on those troublesome terms and also would not say if Ping would incorporate Facebook Connect–which would make it much easier to find friends to share music with.

Instead, users could search for friends via name or send them an email to invite them to join.

Ping was also flush with spam within the first several days of operation, as Eric Slivka wrote at MacRumors:

It’s been less than 24 hours since Apple released iTunes 10 and its integrated social networking functionality, Ping, but spammers and scammers are already starting to spread their messages via the service. The first major instance appears to be a “free iPhone” scam that has seen multiple accounts posting replies to entries from a number of the most popular music artists currently using Ping.

While it shouldn’t be a surprise that spammers would seize upon any opportunity to get their links in front of a large number of people, Ping’s linkage to the iTunes Store would at first glance appear to make things more difficult for spammers, who would need to create verified iTunes accounts before spamming.

To be precise: As of 11am Pacific Time I was not aware of a Ping account in my name. At present I don't know who created said account. Ping?

Not a Bang, But a Whimper

All of this added up to a pretty bad first impression being left on iTunes users. I know I quickly learned to navigate around Ping when using iTunes. Mercifully, iTunes 10.1 — released 2 months after Ping launched — Apple included a toggle to disable Ping.

After that, the service stagnated quickly, and Apple quietly shuttered the service just two years after launch.

iTunes Ping is the first example that is quoted when making comments that Apple just doesn’t understand social media. I think that’s a fair point, and I don’t think Apple’s made big strides in the right direction since flipping the switch on the Ping servers in 2012.

While Apple Music doesn’t include a full-fledged social network like Ping, the Connect tab in the app sure feels like Ping’s successor. It’s rumored to survive the impending changes to Apple Music, but I find that a little surprising, as it’s failed to gain steam.

Either way, the mashup of Beats, iTunes and the iOS Music app has resulted in something that’s pretty messy. Will Apple learn from this lesson, and from the lessons of Ping? Can the company let a music player just be a music player?