These new iMacs all had three main new features: a slot-loading optical drive, Airport capability and a tweaked case that allowed for fanless operation.

Jobs opened the iMac pitch with the optical drive. Gone was the tray-loading drive, replaced with a slot-loading drive. This may seem odd now, but according to Walter Isaacson, it was important to Jobs. Here’s a story from the time leading up to the original iMac’s 1998 launch:

Jobs had not seen the final product before, and when he looked at it onstage he saw a button the front, under the display. He pushed it and the CD tray opened. “What the fuck is this?!?” he asked, though not as politely.

“Steve, this is exactly the drive I showed you when we talked about the components,” Rubinstein explained. “No, there was never a tray, just a slot,” Jobs insisted. Rubinstein didn’t back down. Job’s fury didn’t abate. “I almost started crying, because it was too late to do anything about it,” Jobs later recalled.

Beyond the optical drive, the October 1999 iMacs all shipped with slots for an optional $99 Airport card, bringing wireless networking to the iMac for the first time. Tray-loading iMac users were stuck with modems and Ethernet cables.

Next, Jobs highlighted the fact that this model of iMac shipped without a fan. The slot loading machines featured a slight case redesign that included a much larger area for ventilation around the handle, as you can see on my Grape and Indigo models: Compared to the tray-loading models, these computers were quieter and more power efficient.

Slot-loading drives, Airport and no fan were big improvements. Additionally, these machines were more transparent than before and came with built-in Harman Kardon speakers.

There was, however, one more thing: the iMac DV. With this revision in October 1998, Apple split the iMac lineup for the first time into a “Good, Better, Best” arrangement: 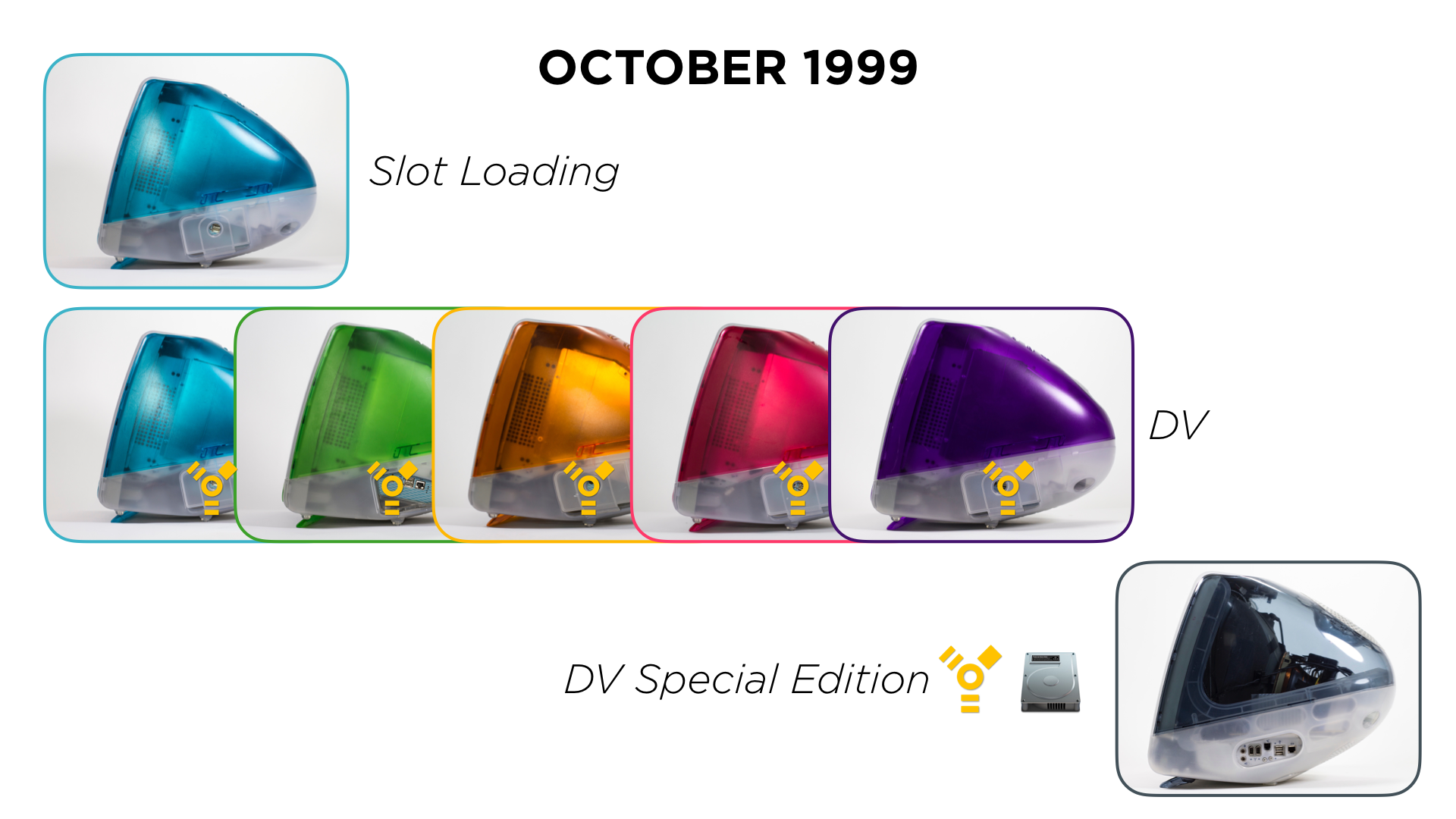 The middle rung — dubbed the iMac DV — shipped with slightly revised Five Flavors colors,2 and a whole lot more for $1,299.

(The VGA port was stashed behind a removal panel on the back of the iMac. You could replace with a second panel that included an opening that exposed the port. Fiddly, but I guess Apple didn’t want to show that ugly port off to the world.)

Bringing FireWire to the iMac was a big deal. While this was before the Digital Hub strategy had a name, it gave regular consumers access digital camcorders. FireWire was developed by Apple starting in 1986 as a high-speed serial bus to replace the clunky and problem-prone SCSI interface found on Macs. With help from Sony and other companies, FireWire entered the market in the mid-1990s. Commonly used for transferring digital video and other large files, FireWire was a major part of Apple’s computer lineup and feature set for many years, eventually giving way to Thunderbolt.

This computer marked the introduction of iMovie. Built on the back of QuickTime, it allowed users to import and edit videos right on the desktop. DVD burning was still a little ways off, but these movies could be exported to disk, back to the camcorder (and out to a VHD recorder) or published online.

“Desktop video,” Jobs said, “will be as big as desktop publishing.”

In his demo of iMovie, Jobs imported footage over Firewire to a Grape iMac DV. Once imported, he stitched them together with some transitions with just a few clicks.

There, was, one more one more thing, however: the iMac DV Special Edition.

Available only in a stunning new color called Graphite, this machine was an iMac DV with 128 MB of RAM and a 13 GB hard drive that sold for $1,499.