If rumors are true, the next MacBook Pro will lack the standard F1-F12 keys that have graced keyboards for years. In its place, Apple is said to be using an OLED touch-sensitive bar.

Martin Hajek has created some mockups of what this could look like that are pretty stunning: 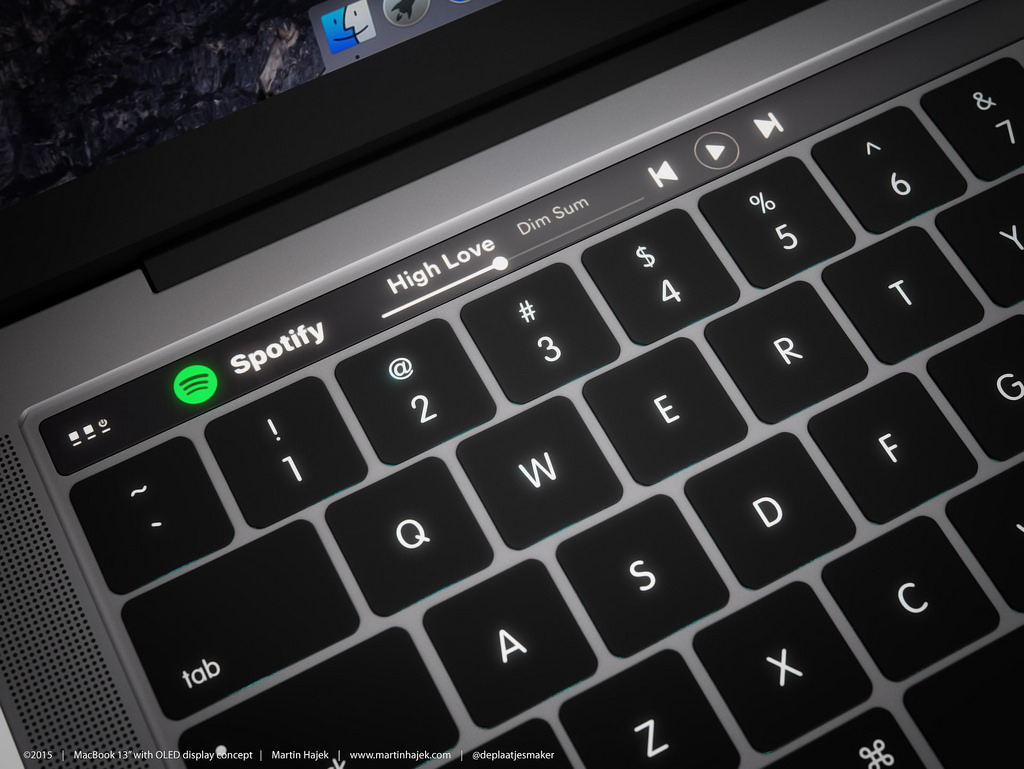 This type of hardware would give Apple a lot of flexibility. In the original iPhone keynote, Steve Jobs said something really interesting, with photos of existing smartphones on the slide over his shoulder:

What happens if you think of a great idea six months from now? You can’t run around and add a button to these things. They’re already shipped. So what do you do? It doesn’t work because the buttons and controls can’t change.

The iPhone’s solution was to get rid of all of these plastic buttons, and make the entire experience — keyboard and all — take place in software running on a touchscreen.

I think this flexibility has a lot to do with what Apple is up to with this probably-new MacBook Pro.

The obvious example is updating the function keys themselves. With OS X Lion, F4 was rebadged for Launchpad, demoting Dashboard and its icon from the keyboard of new Macs. However, if you had an old Mac, F4’s outdated keycap would remain as a testament to Dashboard’s fall from grace.

In short, Apple couldn’t run around and update the button for everyone. The OLED bar would allow Apple to change the purpose of the function keys as needed. However, their placement has been pretty stable for a long time and I don’t see this is a good enough reason to radically shake things up.

Of course, a new MacBook Pro with light-up function keys wouldn’t be taking full advantage of this hardware, so it’s been heavily rumored that the bar can show context-aware controls.

The most frequent example I’ve seen go by on Twitter is media playback.

The F7-F9 keys of today can skip forward and backwards and play/pause music, while F10-F12 control volume. These keys sit to the right of things like screen brightness and Mission Control, tucked nicely out of the way. iTunes doesn’t have to be active for these buttons to be just a finger’s reach away.

I assume that information displayed by apps like iTunes wouldn’t cover up the system-wide function keys like screen brightness. I really hope that’s the case, but app-driven content will surely have to cover some system function keys. There’s not a ton of space there, so what gets overridden when?

Assuming all sorts of apps can put information on the OLED bar, I don’t want to see this screen change its content every time I change my foremost application. That could be fairly distracting while trying to focus.

Furthermore, If Apple open this up to third-parties, it may be frustrating to have very different types of information or controls present on the OLED bar. If iTunes displays music one way, but Spotify does something else, it’s going to be an inconsistent experience.

This space could be the next-generation menu bar app. Some are really good, and some are terrible wastes of space. I’m hoping there are settings to limit what apps are allowed to be present.

Maybe I’m approaching this with a lack of imagination, but at this point, I’m not sold on this change being a great one. Apple doesn’t change function keys around very often, and allowing apps to place content or controls above the regular keyboard may prove confusing or distracting.