Welp, it is real. These images are straight out of System/​Library/​PrivateFrameworks/​PassKitUI.framework/​Versions/​A/​Resources on my Mac running 10.12.1:

There’s a lot to parse here. Clearly, the rumors of a Magic Toolbar are all correct, as well the inclusion of Touch ID to the right of the Toolbar. It looks like this version of Touch ID lacks the stainless steel ring found on iOS devices.1

There’s some conjecture that this is running on top of the S1 — or something related to it. That makes a ton of sense to me.

Would be pretty fascinating if the Magic Bar ran on a variant of the S1 chip and had “extensions” like WatchKit…on macOS? https://t.co/SHSvujOtJm

Beyond TouchID, these images seem to match what we’ve been expecting out of the Magic Toolbar. The Fn keys are gone, and it looks like the system can show related content on the screen. That first image shows a Cancel button, the Apple Pay logo and directions on where to touch to pay, complete with a janky-ass red arrow.

There’s also no hardware Escape key. Even the Chromebook keyboard — WHICH REPLACES THE CAPS LOCK KEY WITH A SEARCH BUTTON — ships with an Escape key.

Jeff Geerling points out that 10.12.1 has added the ability to re-map the Escape key. Or maybe this will be a thing.

There are some other interesting things going on here. The speaker grills look like what’s on the MacBook, but running down the sides of the keyboard. The current 13-inch MacBook Pro has solid aluminum on this surface. 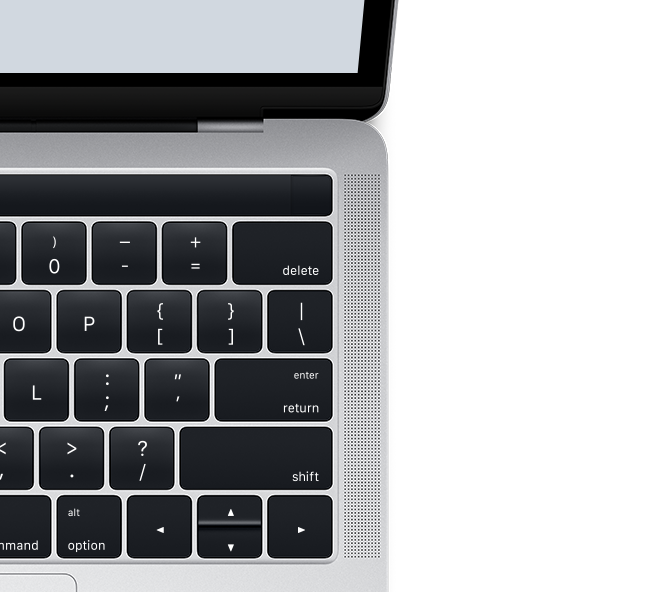 The hinge looks like a cousin of what is on the 12-inch MacBook with Retina display, as do the keycaps. I’m hoping the key travel is equal to that of the Smart Keyboard, but I’m suddenly afraid it’s going to match that of the MacBook.

At least we have something exciting to discuss right before what may be a lack-luster quarterly results call in an hour or so.