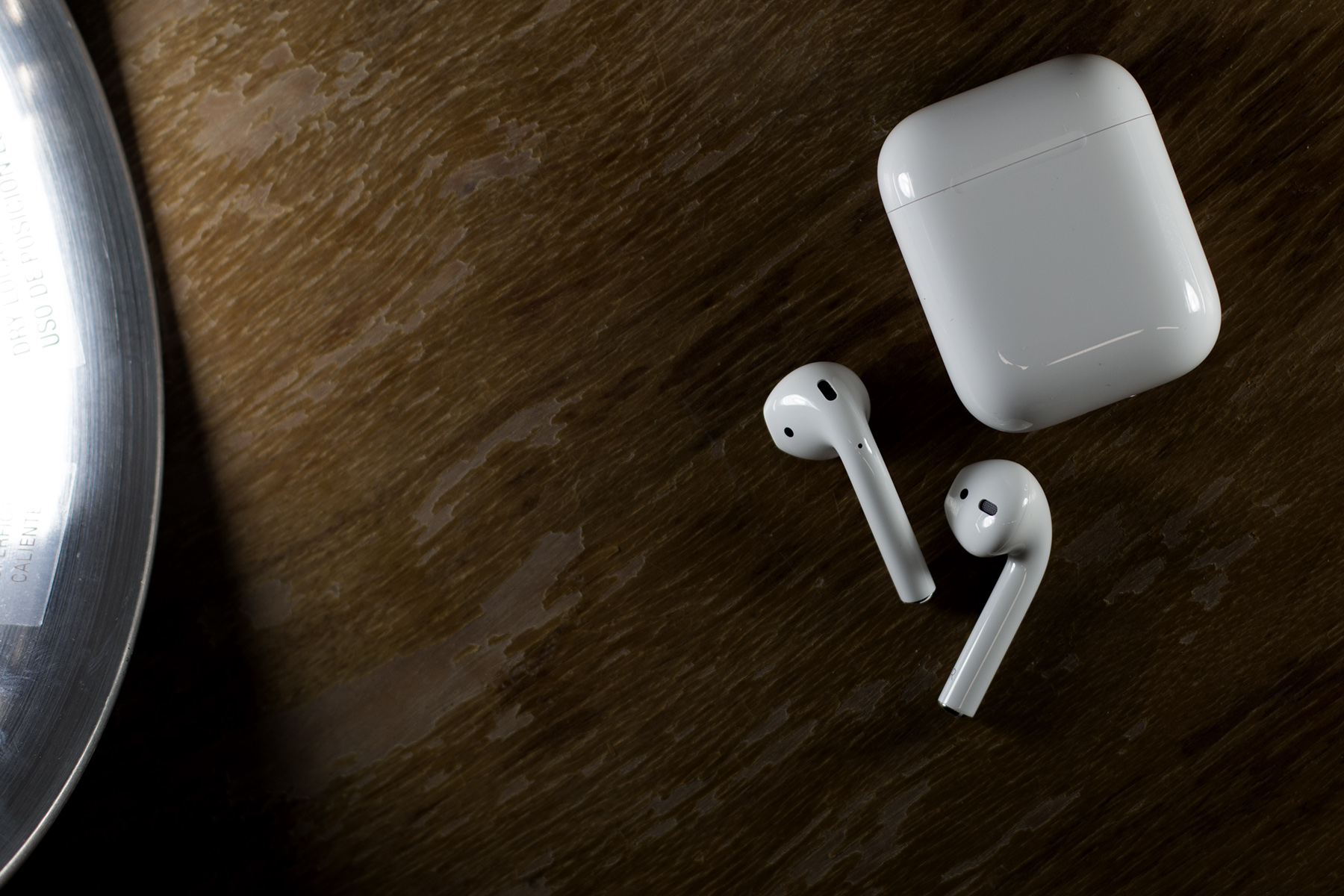 After months of waiting, I finally got my hands on a set of AirPods, Apple’s new wireless earbuds that were promised way back at the iPhone 7 event in September.

I’ve only had them for a day or so, so this isn’t a comprehensive review, but I wanted to share some initial impressions.

The AirPods are full of little touches of whimsy that make them feel a lot smarter than normal headphones:

All of this adds up to the AirPods feeling intelligent about their surroundings. Apple really thought all of these use cases through, and I appreciate it. The AirPods just do the right thing.

Pairing these things is easy. Open the case and push the button on the back. That’s it; your iOS device will ask you if you want to pair, and then the info about the AirPods is saved to your iCloud account, so you can quickly select them in Control Center on your other iOS devices, or from the Sound menu bar item on macOS.

Behind the scenes, this is all powered by Apple’s fancy new W1 chip, which is some type of superset over regular Bluetooth. The range seems way larger than my old Powerbeats.

It’s not perfect, though. I have had the AirPods drop chunks of audio, especially after switching devices. Taking them out and then reseating them in my ears has always cleared it up.

There’s probably no way around this: I think these things look a little goofy: 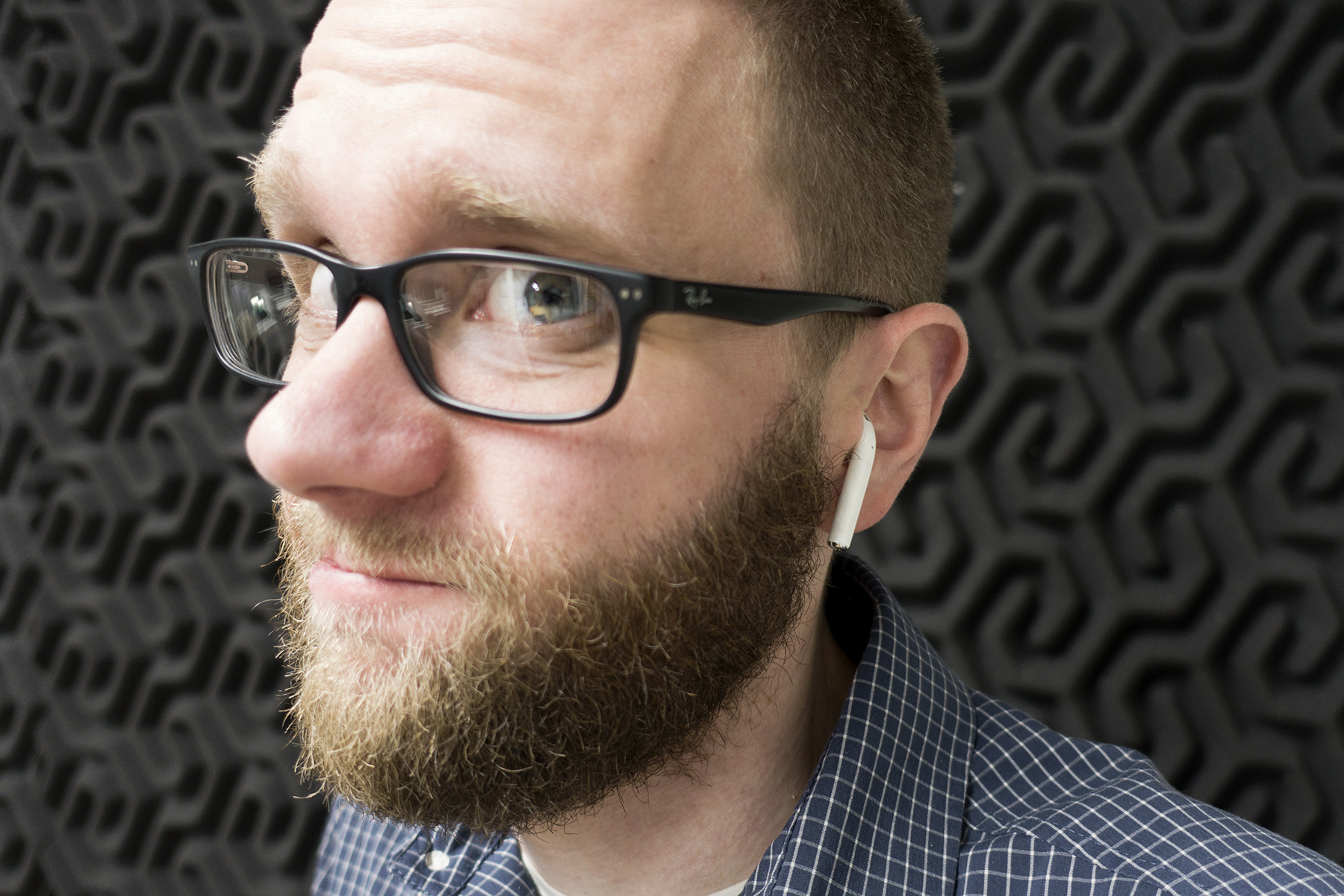 Its like Jony Ive put his EarPods in a vice grip, sliced off the cable and elongated the stem.

I’m hoping they seem a little more normal over time, but at this point, I think I may catch some looks with them on in public.

They fit me pretty well. I never loved the EarPods, but I didn’t find them too problematic. These seem to fit a little bit better, thanks to the wire pulling them out and down being gone. As is the case with these things, your mileage may vary, since Apple doesn’t offer foam or rubber tips to change the size, like many other manufacturers.

The case is a joy to use. The lid is magnetic, and makes a lovely little click when it closes:

The whole thing feels solid and dense. I’m a fan, even if it does look like I could pull dental floss out of it.

Apple says the AirPods themselves will get five hours of battery life, while the case packs 24 hours of charge. I can’t vouch for the case battery life yet, but five hours seems pretty much right to me so far. Thankfully, just 15 minutes in the case will result in three hours of listening time, so charging mid-day on a lunch break shouldn’t be a problem for people using these all day.

To check the battery charge, simply flip open the case and a panel will slide up from Control Center showing the charge of the AirPods and the case.

The AirPods themselves also show up in iOS’ battery widget, and if it is opened, the case will as well. If you are using just one, the graphic on the battery widget will update to reflect that: 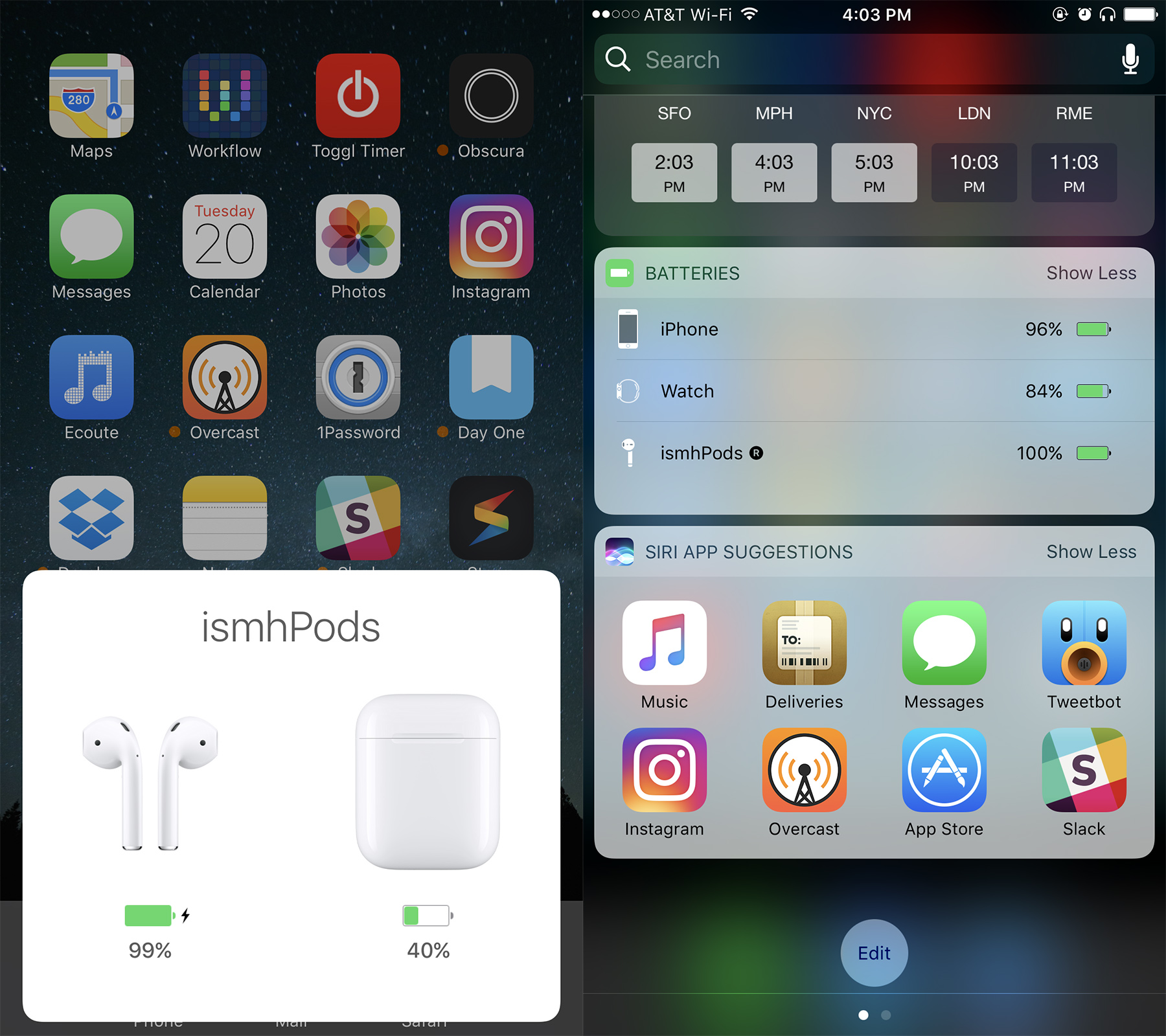 You can also ask Siri for the battery level of the AirPods.

The AirPods support just one gesture: a double tap. By default, this activates Siri on whatever iOS device or Mac they are connected to.

The double tap can be changed to act as a play/pause button, but Siri is probably more useful. Siri can change volume, skip tracks and more that the AirPods can’t do on their own.

This is a step backwards in usability from the in-line remote we’ve grown used to. I keep trying to double tap the AirPods to skip tracks. I think that muscle memory is from the old in-line remote, and I’m afraid it’s going to take a while to break.

My guess is that I’ll just pull my iPhone out to change something rather than talk to Siri in the gym. I usually have Internet access, but those who travel underground or on airplanes are going to be sad.

The AirPods are $159, which is a lot of money, but $40 less than the Powerbeats that I have been using up this point when working out or cutting the grass. I think the price is fair.

If you use your iPhone a lot, and you liked Apple’s previous EarPods, I think the AirPods are a great upgrade. They sound like their wired cousins, making the move easier.

AirPods are clever and fun, just like a good Apple product should be.