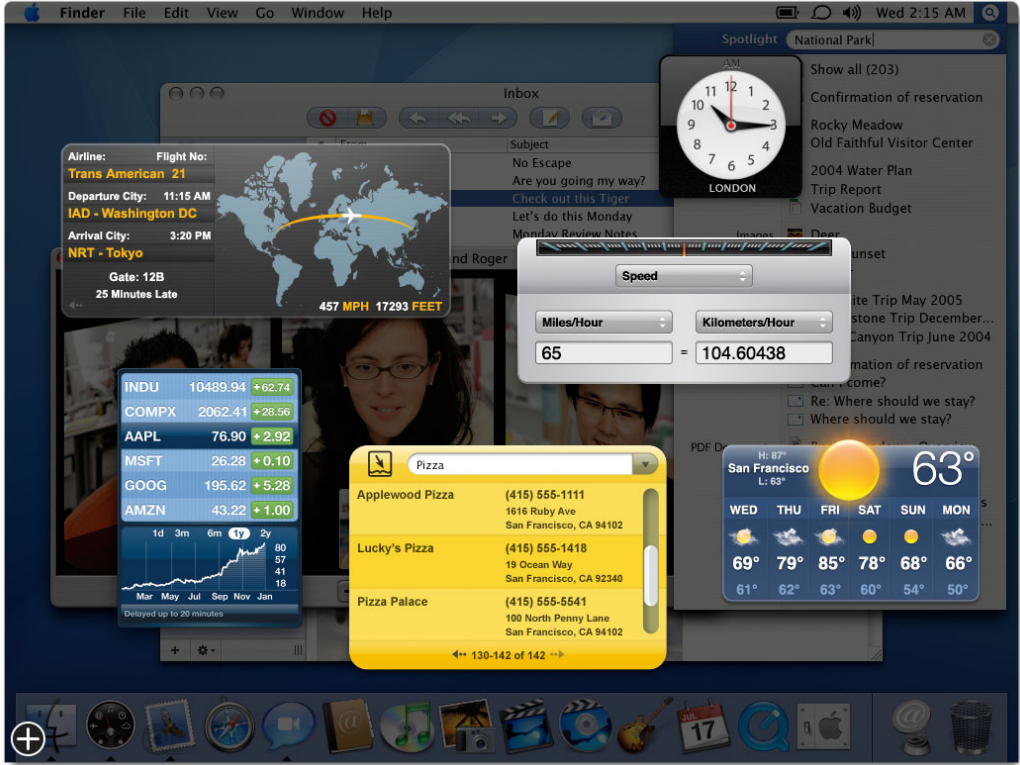 Dashboard is home to widgets: mini-applications that let you perform common tasks and provide you with fast access to information. With a single click, Dashboard appears, complete with widgets that bring you a world of information — real-time weather, stock tickers, flight information and more — instantly. Dashboard disappears just as easily, so you can get back to what you were doing.

While not as flashy or important as Tiger’s keystone feature, Spotlight, Dashboard still enjoyed a big push from Jobs on stage.

A user could tap a keyboard shortcut or visit a hot corner and Dashboard would activate, dimming the screen and flying in widgets. Adding new ones could be done with a click of the mouse.

(My Titanium PowerBook’s GPU couldn’t render the water ripple effect that played when a new widget was added to Dashboard. However, college roommate’s aluminum PowerBook could do it without breaking a sweat. I was insanely jealous of him for about 72 hours after we both installed Tiger in our dorm room.)

Jobs pitched widgets as mini-apps that let you look up a quick bit of information without ruining your workflow or train of thought. They allowed for quick interactions. They were present when you needed them, and disappeared when you didn’t.

I remember being impressed at the demo, and even more impressed once I had my hands on Tiger, but John Siracusa wanted more:

I have one big complaint. Apple has unnecessarily linked two good ideas in Dashboard: the widgets themselves, and the Exposé-style layer where they live. While I really love the idea of a separate window layer for infrequently used items, I’m extremely disappointed that only Dashboard widgets can live there. To a lesser extent, I’m also disappointed that Dashboard widgets can’t be interleaved with regular windows, float on top of all windows, or be embedded in the desktop like Konfabulator1 widgets can.

Tiger came with these widgets pre-installed:

The Widgets Widget simplifies Widget installation, providing you with clear notification when a new widget is being installed. The easiest way to enable and disable widgets, the Widgets Widget also lets you sort your widgets by name or by date. (The latter’s a great way to tell the newest from the oldest widgets.) And if you find a widget you’re no longer using, you can also use it to delete widgets.

The list of default widgets has changed over the years, but this is what a clean install of macOS Sierra includes.

After Dashboard launched in 2005, Apple published a huge library of third-party widgets. The first 1,000 were available in the first four months, and by the time Leopard rolled around, Apple boasted that more than 3,000 widgets were available for download.

The widget directory is still up to this day, listing some 1,900 widgets still around for download. My guess a bunch of them rely on web-based services that are no longer working, though.

One reason for the boom is that it is super easy write Dashboard widgets, as the environment is based on WebKit. Under the hood, a widget is just some HTML, CSS and Javascript. I remember making one for myself in just a few minutes that showed me a dogcow every time I opened Dashboard.

The core technology behind Dashboard has remained the same since Tiger’s introduction way back in 2005.

Perhaps the biggest addition Apple made to Dashboard was WebClips, which premiered in Mac OS X Leopard. This feature allowed a user to make a selection of a webpage in Safari and save it as a widget. These widgets would auto-update, so it was a great way to keep tabs on headlines or a sports score without having to leave it open in a web browser window.

In Leopard, Apple shipped an application named Dashcode. It made creating widgets simple, giving developers a visual workflow for putting assets together and bundling everything up as a .wdgt file.

Dashcode.app was last updated in July 2012. It can still be downloaded from Apple’s developer site, but doesn’t run on macOS Sierra. Many of its features have been rolled into Xcode, and re-used in tools to build webapps for Safari on the desktop and iOS.

Konfabulator was an existing third-party application that allowed users to place widgets on their desktops:

Konfabulator is a JavaScript runtime engine for Windows and Mac OS X that lets you run little files called Widgets that can do pretty much whatever you want them to. Widgets can be alarm clocks, calculators, can tell you your WiFi signal strength, will fetch the latest stock quotes for your preferred symbols, and even give your current local weather.

What sets Konfabulator apart from other scripting applications is that it takes full advantage of today’s advanced graphics. This allows Widgets to blend fluidly into your desktop without the constraints of traditional window borders. Toss in some sliding and fading, and these little guys are right at home in Windows XP and Mac OS X.

Arlo Rose, the developer behind Konfabulator Arlo Rose was not happy, according to a CNET article at the time:

“It’s insulting, is what it is,” Rose said in a telephone interview. “They could have at least offered to work with us or to buy it.”

Apple, for its part, maintains that Dashboard is the company’s own creation, noting that Widgets have long been a part of Mac OS X and the NextStep OS.

“The goal isn’t to be like anything else,” Apple Senior Vice President Phil Schiller said in an interview. “It’s not his stuff. What we’ve done is ours.”

Not everyone thought Apple ripped it off, however. Here’s John Gruber:

Bullshit. Dashboard is not a rip-off of Konfabulator. Yes, they are doing very much the same thing. But what it is that they’re doing was not an original idea to Konfabulator. The scope of a “widget” is very much the modern-day equivalent of a desk accessory.

The classic Mac OS shipped with Desk Accessories, which were small, single-purpose programs that could run alongside a user’s main application, even before the Mac could truly multitask.

Regardless of where the original idea came from, many thought Dashboard was a pretty clear clone of Konfabulator. The app’s website certainly said as much after Dashboard had been unveiled: 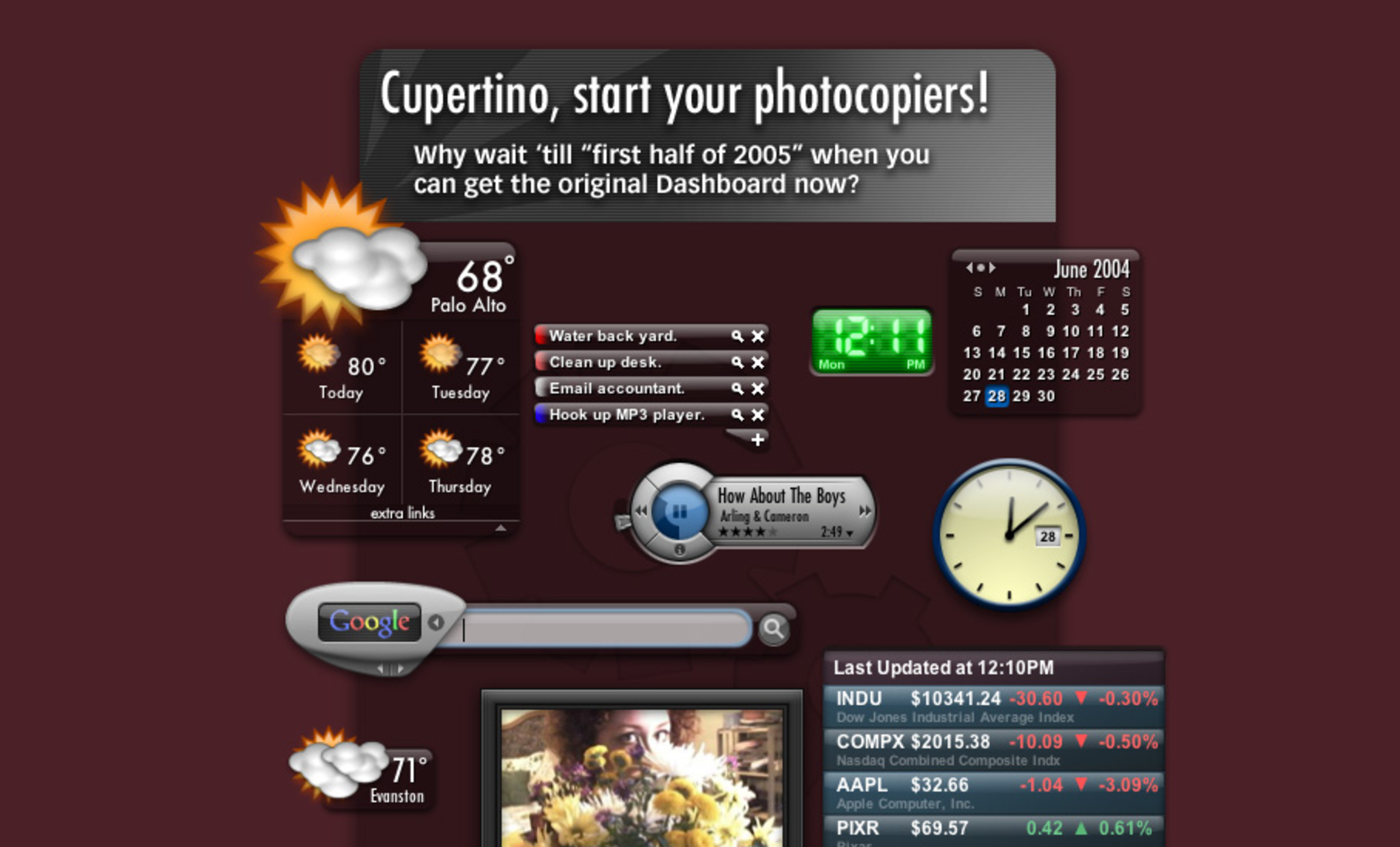 I can only assume Apple was aware of Konfabulator’s existence when developing Dashboard. While Sherlocking is something that happens, it’s always a little icky to consider.

Konfabulator was purchased by Yahoo in July 2005 and powered Yahoo Widgets until 2012 when the platform was shut down.

For a couple of years, I used Dashboard pretty heavily. I had all sorts of little utilities handy, but over time, it slowly faded from my workflow.

My guess is that’s the case for most Mac users. Slowly but surely, stuff that widgets were great at has been replaced by things like simple iOS apps or even quick Google searches.

Dashboard itself has faded, too. Starting with OS X Lion, Dashboard could be configured to act as a space to the left of the first desktop, accessible via Mission Control or a swipe. I remember the change, and thought at the time that it felt like a demotion for the once-impressive user interface and placement Dashboard had previously enjoyed.

As of OS X El Capitan, Dashboard is off by default on fresh installations. Notification Center has become the new target for Mac developers wanting to build widgets, and Dashboard’s dedicated media key on MacBooks and external keyboard has been replaced with one for Launchpad.

(You can add it back if your Mac has a Touch Bar, though.)

Every year, I think to myself that Dashboard has reached the end of the line, but Apple keeps surprising me.

Maybe someone important on the macOS team still really love Dashboard, or maybe everyone’s forgotten it’s still in there, deep in the codebase somewhere. Whatever the reason, Dashboard lives on, for now at least. 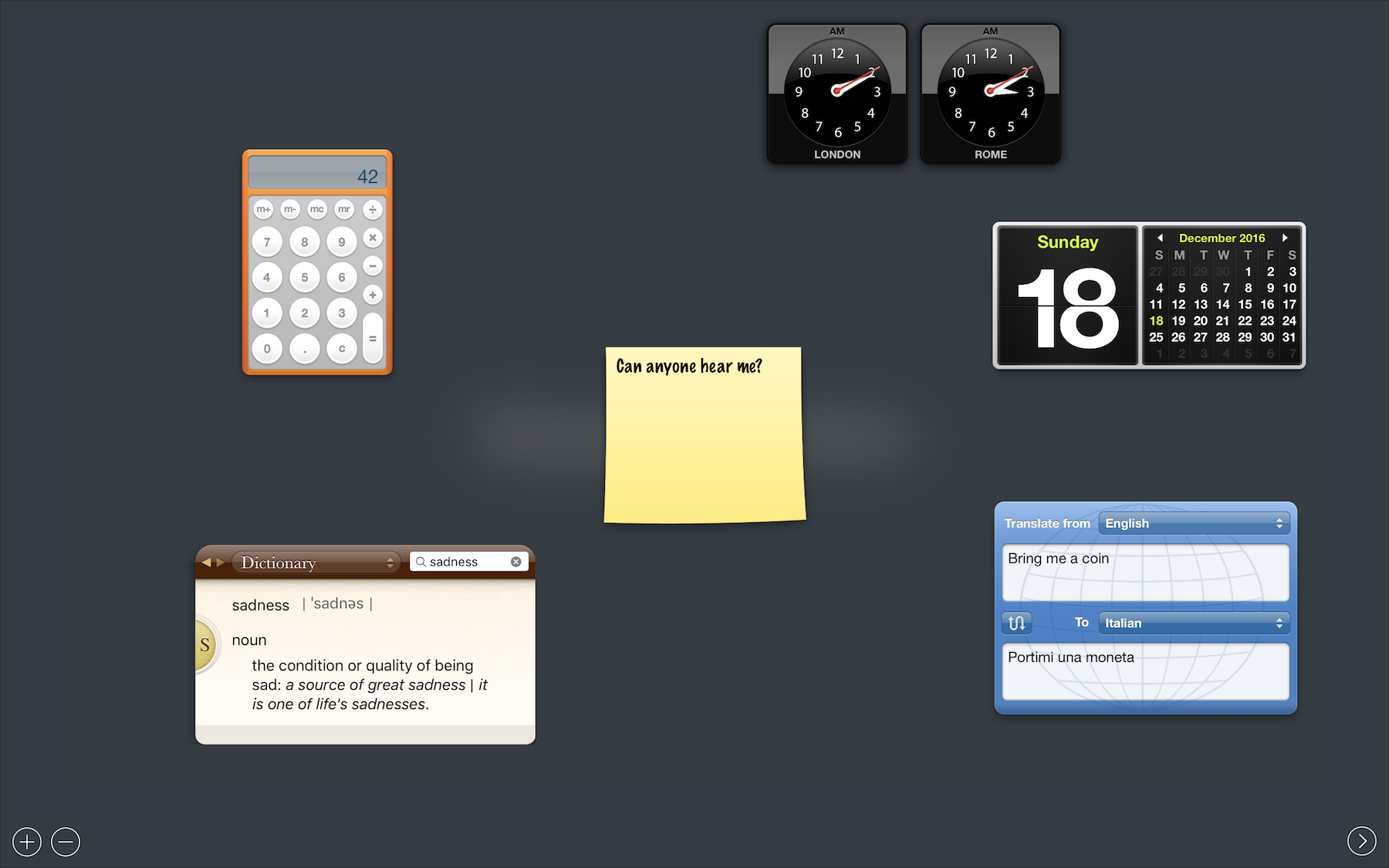 Update: macOS Catalina finally killed Dashboard in 2019, with the death of all 32-bit apps and frameworks.