In September 2007, the world was a very different place. The iPhone had been for sale in the United States just a few months, and not yet taken over the world.

For nearly a decade, Apple held a fall event focused on music. Most of the major iPods you’d recognize got their start at events like this.

Over time, these events — and the music players they featured — faded in importance. In 2007, however, they still mattered, and Jobs was there to prove it.

He unveiled a new iPod nano with an unfortunate shape and what would prove to the be the final form of Apple’s full-sized music player, the iPod classic. 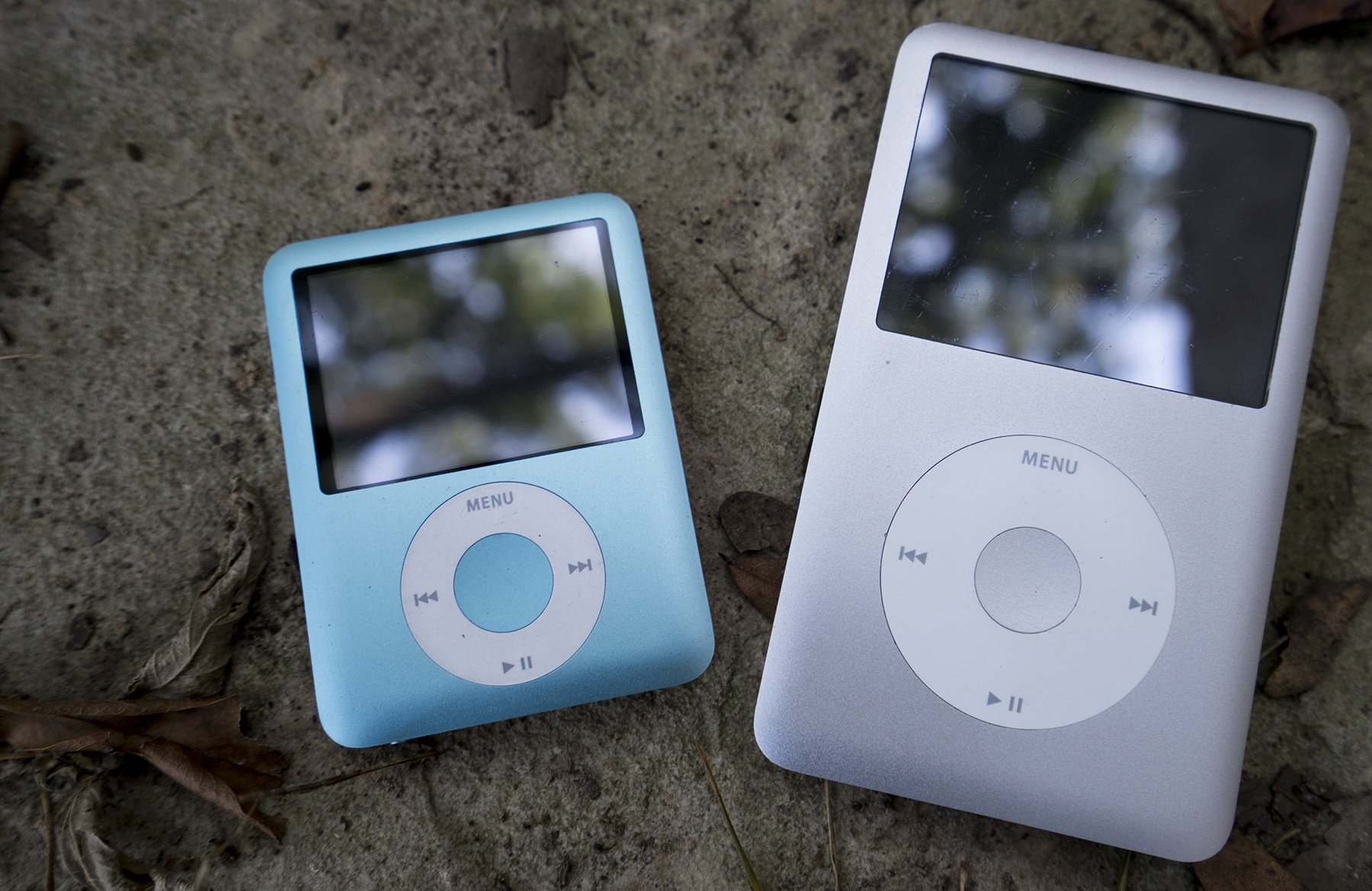 These two product lines would live for several more years before the Classic was killed in September 2014 and the nano in July 2017.

They weren’t the only two iPods announced that day ten years ago, however.

No … there is another. The iPod touch.

Jobs opened his pitch by quoting himself. In January of that year, in his famous iPhone keynote, he called the new device “the best iPod ever.”

“iPhone owners agree with us,” he exclaimed. “It’s incredible with it’s Multi-Touch user interface, its incredible album artwork and video, it is the best iPod ever.”

He said people had been asking when that technology would be brought to the iPod line, then answered it, pulling an iPod touch out of his pocket.

Today, a decade into the iPhone, it’s a little wild to think that people were clamoring for technology to be stripped from the iPhone and applied to the iPod line, but it’s true. In doing so, Apple was able to introduce more people to iPhone OS and its revolutionary user interface. It shipped internationally before the iPhone did; many people first interacted with iPhone OS via the iPod touch, not the iPhone.

Side by side with an iPhone, the family resemblance is strong. The front shared the same 3.5-inch screen set above the Home button. Without all the electronics required to be a phone, the iPod touch was just 8 mm thick, compared to the 11.6 of the original iPhone. 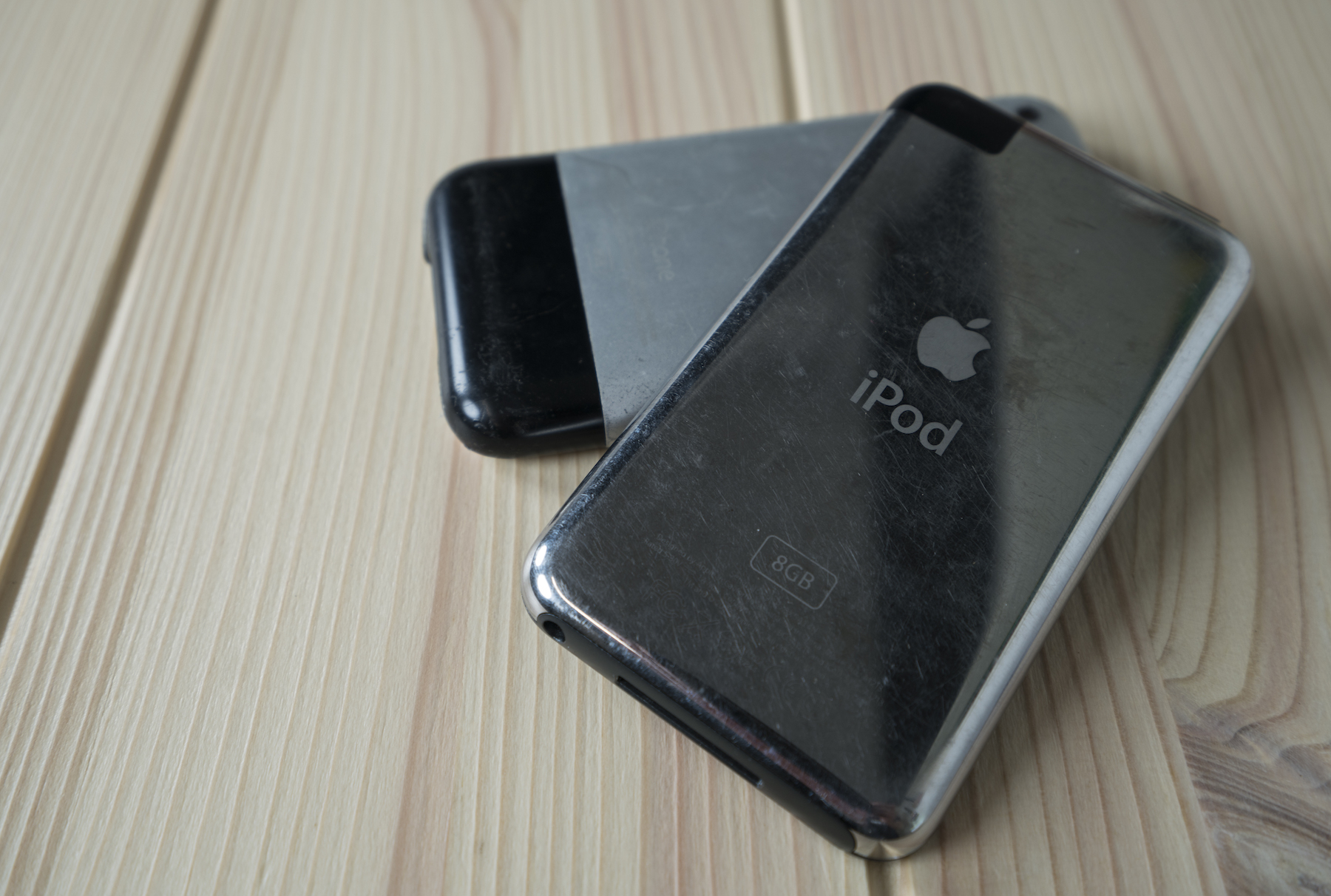 There were some other physical differences as well. The back was all chrome. Around front, the touch used a matte black chamfer around the edges of the device, as opposed to the chrome ring found on the iPhone. To my eye, it has helped this product age more gracefully than the original iPhone. 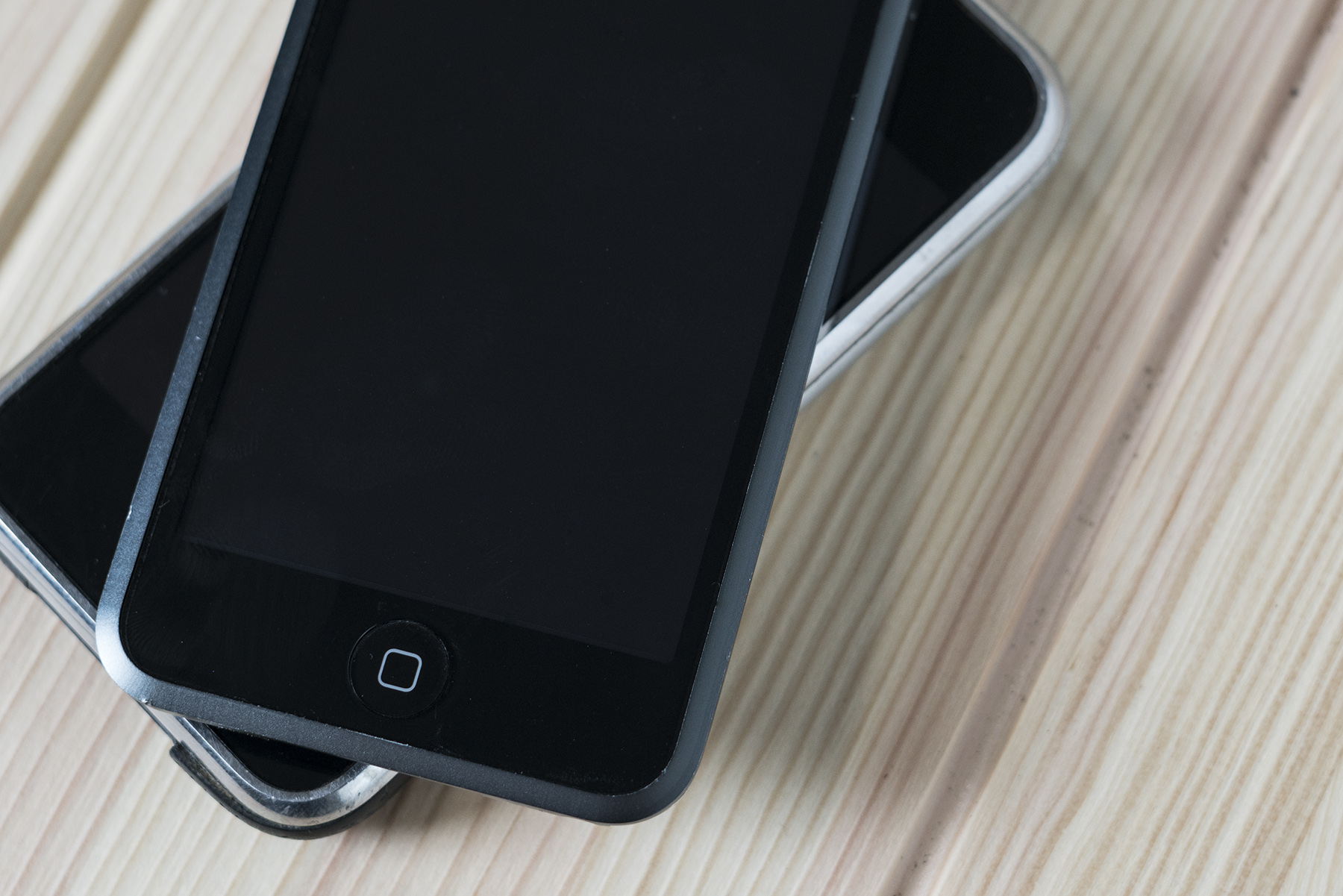 Jobs turned to the iPod touch’s software. He lingered in the Music app, praising the design and Cover Flow. He went on show Videos and Photos. After disclosing that the iPod touch’s chrome back included a small black Wi-Fi antenna window in the upper corner, he showed off Safari on the device.

This was before the days of apps being discrete things. The language here is “built-in,” reflecting the truth that Safari wasn’t so much an app on the iPod, as it was part of the iPod’s firmware. The distinction is minor, but really dates the presentation.

The iPod touch also included the YouTube client from the iPhone, as well as Calendar, Contacts, Clock and Calculator.

There was one more thing, however. Jobs used the iPod touch to introduce it: the iTunes Wi-Fi Music Store.

The store was very much like what we have today: users could search for and browse music and purchase music on the go. It was the entire iTunes Music Store, right in the palm of your hand. There was a content deal with Starbucks that made downloading the coffee shops’s music picks over their Wi-Fi quick and easy.

This felt like a huge deal at the time. I remember freaking out after this was added to my iPhone with a software update. It was the first step on the way to an iPhone free of the Mac or PC.

After being purchased, songs and albums would download — over Wi-Fi — directly to the device. Purchased music would then be synced over USB back to iTunes the next time the iPod was plugged in to its host Mac or PC.

It’s design would span two generations, and featured external volume controls via a new rocker switch on its side, an external speaker (for “casual” listening) and a new contoured back. Even though this design is slightly thicker than the one before it, it felt smaller in the hand. Sadly, the dark metal band around the front of the device was gone. 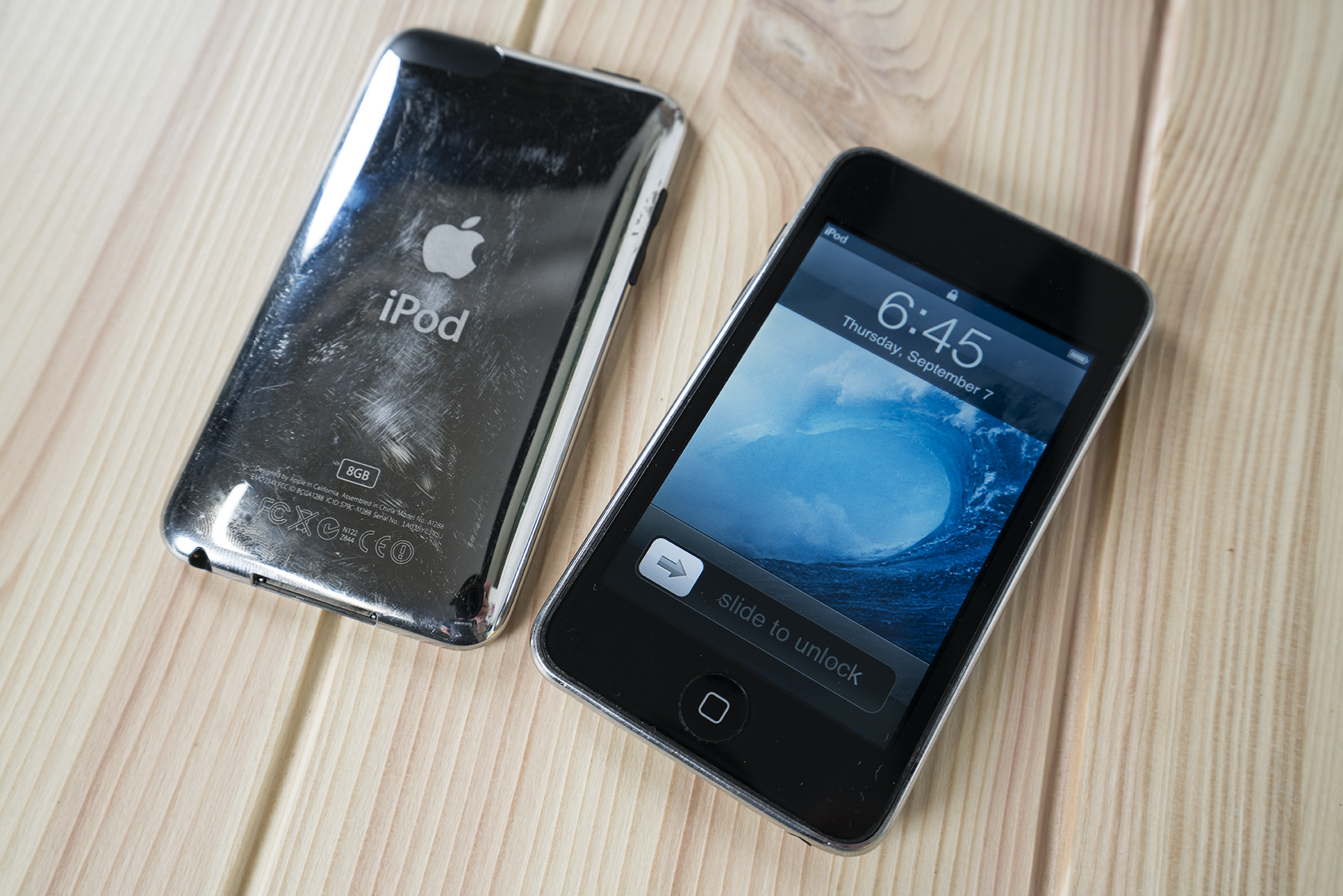 The second-generation iPod touch holds the title of fastest iPhone OS device in its day. The first Touch, and both the iPhone and iPhone 3G had a 620 MHz processor, but it was under-clocked to just 412 MHz. The second-gen Touch had the same chipset, but was run at a faster 532 MHz.

It was also the first iPod touch with Bluetooth.

This iPod touch shipped with iPhone OS 2.1, complete with the then-new App Store, which had debuted a few months earlier. It also came with the Nike+ running software built-in. Unlike the nano, the Nike+ receiver was built into the product; a user just needed the little puck for their shoes and they’d be set.

2008’s iPod touch also included the Genius Playlist feature from iTunes and the iPhone. With this, the Touch could build a playlist based on the currently-playing music.

Much of this keynote was dedicated to gaming on the iPod touch. This push would only grow over time, but it started with this slightly-faster device. “It’s the funnest iPod ever,” Steve Jobs quipped. “We think people are going to love it!”

For 2009, Apple stayed with the same design. In the two years since its launch, the iPod touch had become very important to Apple. Phil Schiller said it had become a big seller, with 20 million units sold already.

For 2009, Apple split the product line a little. The $199 8 GB model came with the same GPU as before, but two other models didn’t.

The two upper models (32 and 64 GB capacities, for $299 and $399, respectively) were some 50% faster than the previous year’s model. In addition to the higher-clocked CPU, this iPod touch shipped with a more powerful GPU for the first time ever.

This was pitched with a heavy push into mobile gaming. For the first time, Apple took swipes at dedicated mobile game consoles. With iOS 3 onboard, developers were able to take advantage of this new product with the same ease they did the iPhone.

In September 2010, Apple introduced the 4th-generation iPod touch. It was a huge update, bringing a non-IPS version of the the iPhone 4’s Retina display to the music player for the first time.

Additionally, it came with front and back cameras. This brought FaceTime to the iPod touch with the front-facing camera. The new rear 720p video and 960 x 720 still photos. It was all powered by the new A4 chip found in the iPad and iPhone 4 for smooth performance, coupled with a 3-axis gyroscope.

The design was even thinner than before, with a cleaner look smaller chrome edges at the front and the addition of that camera in the back, not to mention a small speaker port on the bottom that greatly improved the sound out of the device. 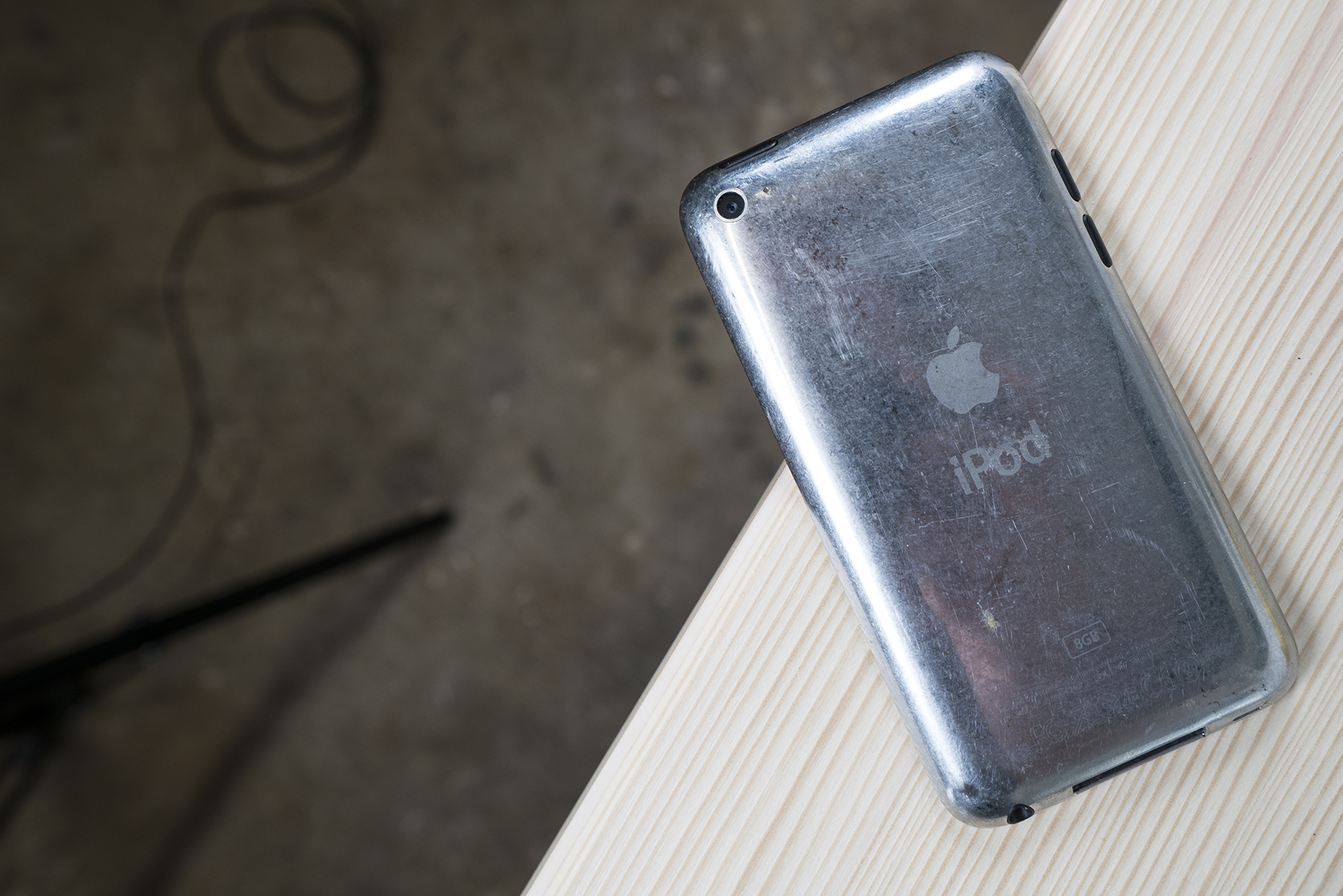 This “iPhone without the phone” had become the “most popular portable game player,” outselling portable consoles from Nintendo and Sony combined. In fact, 1.5 billion games and entertainment apps had been downloaded just to the iPod touch by this 2010 event rolled around.

Apple took a year off with the iPod touch in 2011, but was back in 2012 with all-new device. After the unveiling the iPhone 5, Apple’s Greg Joswiak shared that the new iPod touch had a lot in common with the company’s new phones.

It came with the same 4-inch, IPS Retina display as the iPhone 5. It was powered by a dual-core A5 chip from the iPhone 4S, but was much faster than the outgoing model with a new, more powerful GPU. Shipping with iOS 6, was also the first iPod touch to support Siri and use the Lightning connector.

The rear camera was updated to capture 5 megapixel stills and 1080p videos. This was a significant improvement over the old model, and even included features like an LED flash and a sapphire crystal cover over the lens. With this new camera system and CPU, the 5th-generation iPod touch gained the ability to shoot panoramic images.

For the first time, the Touch came in colors. The silver, yellow, blue, pink and PRODUCT RED models used white glass around front, while the Space Gray used black.

Each iPod touch came with a small circle on the back, opposite the camera. With a firm push, it would pop up, allowing a user to slip on a Wii-like wrist strap Apple called the “iPod touch loop.” Each iPod came with a color-matched Loop in the box. 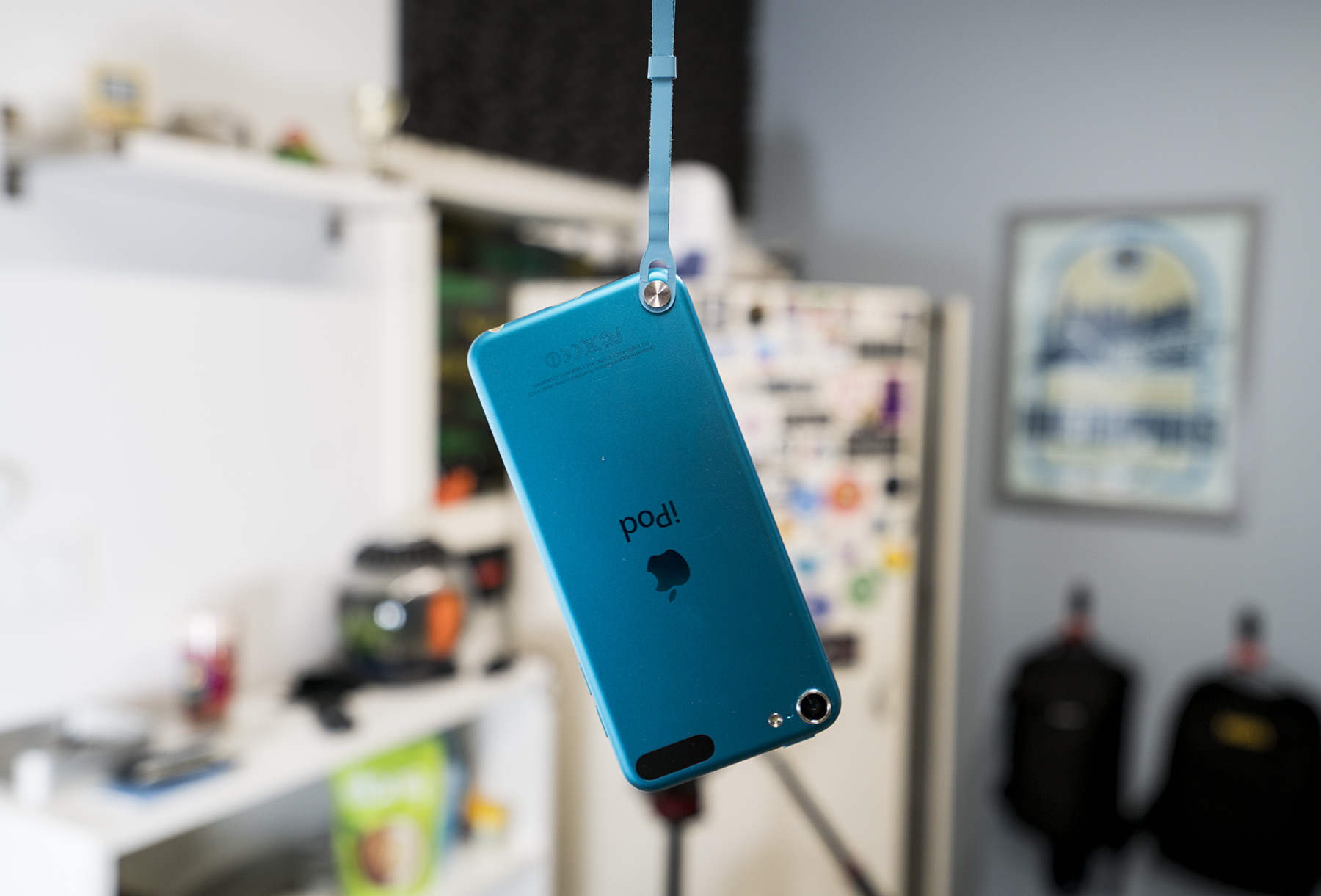 This was a weird move, and Apple corrected it in May 2013, adding a 5th-generation, 16 GB model for $199. This touch only came in silver, lacked the rear camera as well as the Loop. At WWDC 2013, I knew a lot of developers who picked them up at the San Francisco Apple Store to sacrifice them to the first iOS 7 beta.

After three long years, Apple revised the iPod touch in July 2015, albeit via press release. The industrial design was very similar to as before, just without the iPod touch loop. It retained the 4-inch screen from the iPhone 5, but came in more vibrant colors than before. 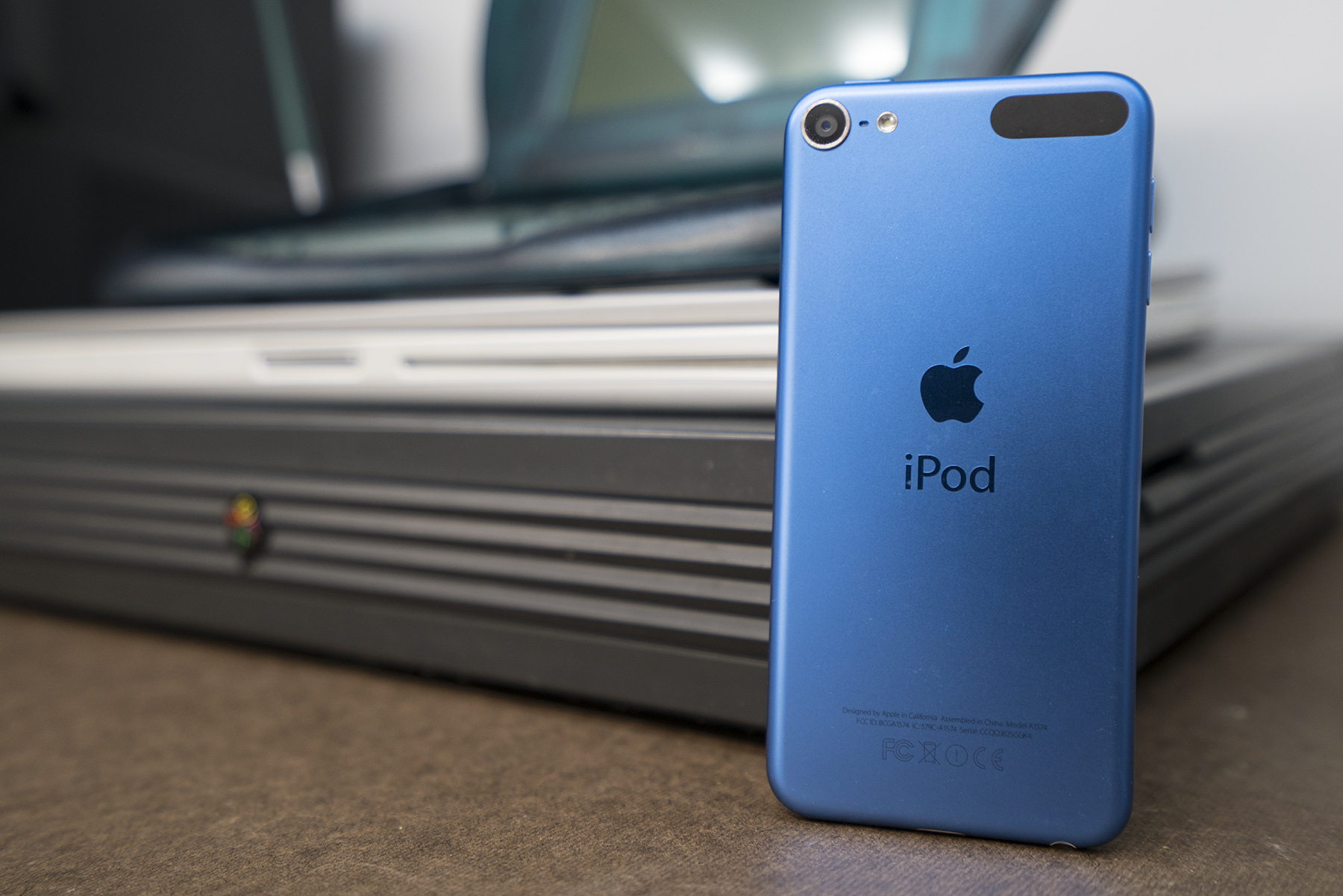 Inside, though, this touch was all-new. It packed the A8 processor from the iPhone 6, bringing the iPod touch into the 64-bit era. It also included more RAM, faster graphics, the M8 motion co-processor, improved cameras, better Wi-fi and Bluetooth 4.1 support. The rear camera got bumped to an 8 megapixel shooter.

It still has the small 4-inch screen, despite living in a world of large phones. Many say that this is because the iPod touch makes a great kid gadget, but I’m sure part of it is just neglect on Apple’s part.