I spent Monday at NASA’s Marshall Space Flight Center in Huntsville, Alabama. I was there as part of a #NASASocial event (my second) to attend the agency’s “State of NASA” event, where Acting NASA Administrator Robert Lightfoot discussed the Administration’s 2019 Budget.

Jason Snell and I spoke at length about the budget on today’s episode of Liftoff. You should go check it out, but the TL;DR is that the White House wants NASA to push Mars to the back burner and get back to the moon next decade. There are a lot of questions about if that’s possible given the budget, and there is lot to be upset about, including cuts to Earth Sciences and education, the cancellation of the WFIRST telescope and the doubts it throws on the future of the International Space Station.

My Day at Marshall

NASA’s operations are spread all over the country, with different centers playing different roles in the agency. Marshall houses a lot of support staff for the International Space Station. The Station’s racks — the large compartments that house the science experiments, equipment and other assets the crew use on a daily basis — are part of a complex, ever-evolving system. The team at Marshall work 24/7/365 to conduct experiments and maintain the hardware about the station. 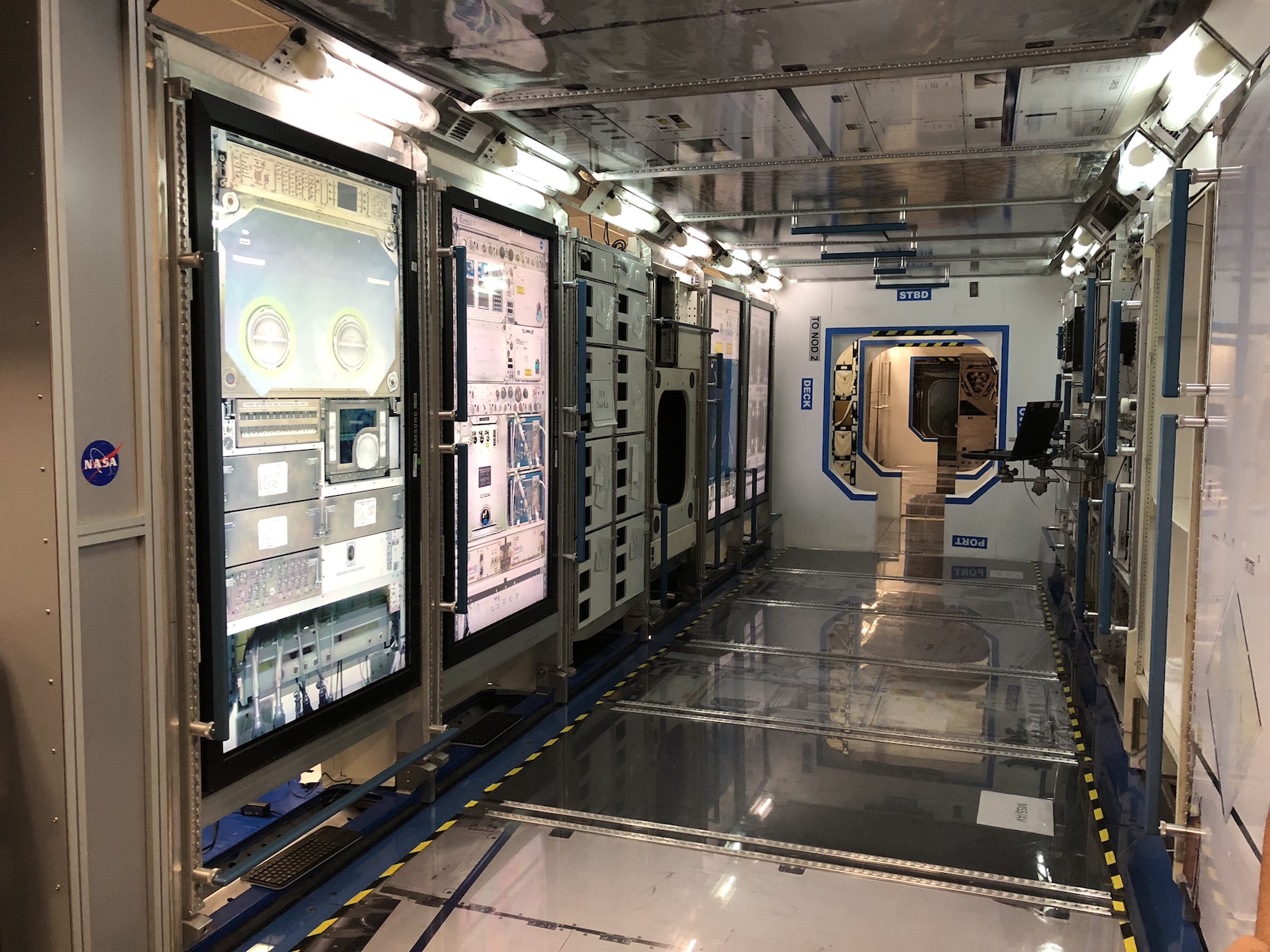 This mockup is located at Marshall. It is designed to provide a place for training of staff who interact with other parts of NASA and the crew aboard the Station. Many of the panels are actually touchscreens that are capable of showing multiple racks. Tap a button or flip a switch, and the simulation does what the rack would do. It was a lot of fun to play with, but more importantly, it provides valuable insight to those who have to work with — and communicate about — this equipment.

This lab is maintained and updated in conjunction with high school interns. I think that’s really cool. I was a big student newspaper nerd in high school, and I loved the couple of chances I had to see how a “real” newspaper worked.

There are other teams in Huntsville working on design elements for future space habitats, like the one that may orbit the moon or even travel to Mars in the 2020s or beyond. Formerly called the Deep Space Gateway, the idea is pretty simple: put a small space station in orbit around the moon and use it as a platform to explore the moon or go to Mars.

The group we met is focused on the human elements of these spaces, not the technology. A trip to Mars and back will take years, so strapping crew members into a capsule isn’t enough; they need sleeping quarters, a kitchen, a place to exercise and more.

We toured a multi-story mockup that included all of this and more. Thanks to the diameter of NASA’s new rocket, the SLS, these habitats can be quite large: 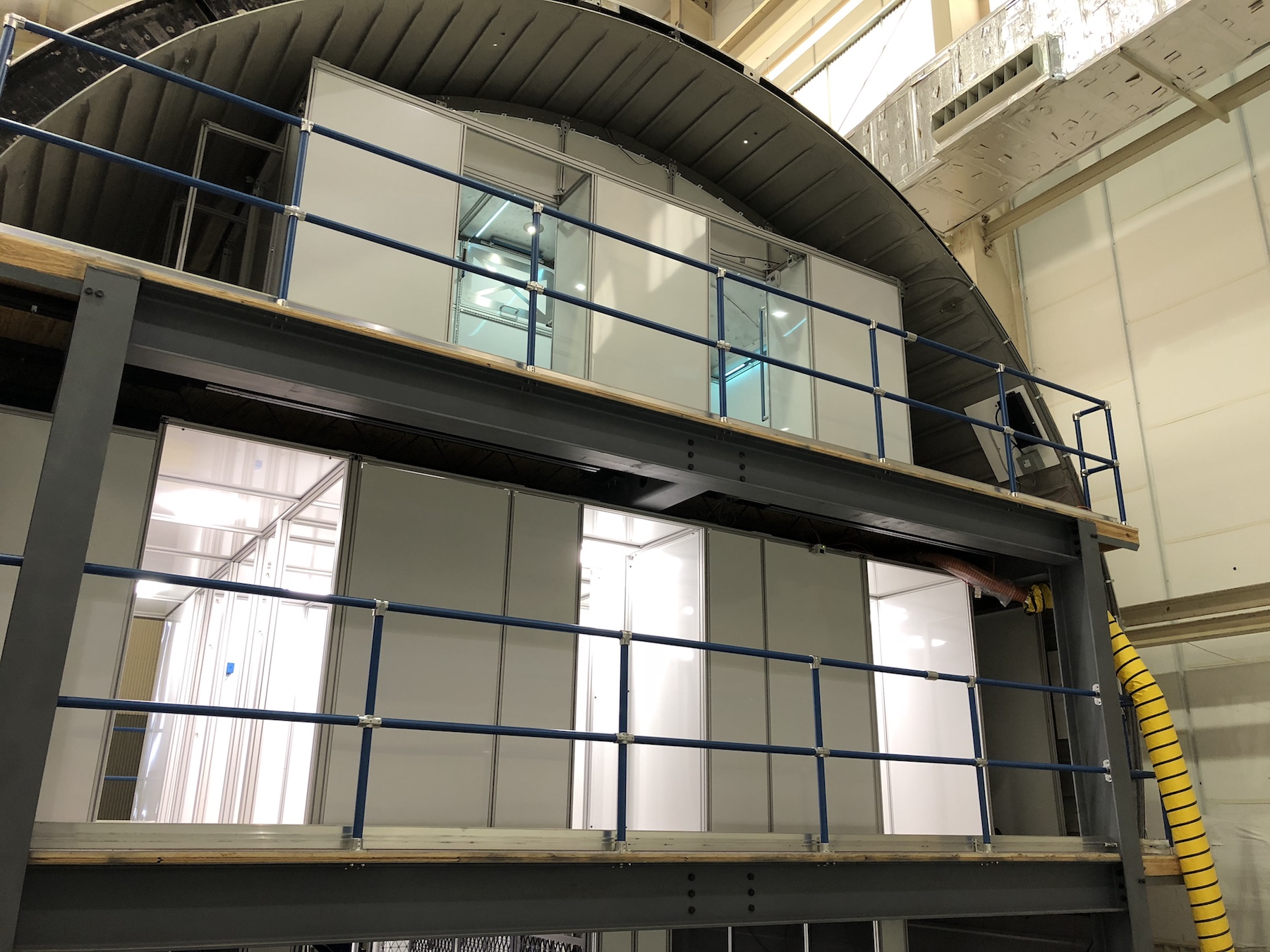 Inside, the team was exploring ideas and concepts in 3D-space. I have to say, I died a little bit inside when I saw the kitchen area was noticeably bigger than the one in my wife and I’s first apartment together. Don’t tell her.

A large part of this research is about the reparability of hardware, both before and after launch. Questions about access, space for tool movement and more are considered, and with the use of motion tracking, can be mocked up virtually before any welds are made.

Marshall Space Flight Center’s heritage is in propulsion. The center has been home to the development of every major NASA vehicle, from the early days of Mercury to the shuttle and now NASA’s new rocket, the SLS.

SLS is a big vehicle. It will evolve and grow over time, but will put NASA back on the map when it comes to flying crew, equipment and supplies to low-Earth orbit and beyond. The rocket itself is made up of remixed shuttle-era hardware, including the two side-mounted solid rocket boosters and the RS-25 motors at the bottom of the stack, which once graced the business end of the orbiter itself.

We saw the several components that are being built in Huntsville. Not everything is being built at Marshall, but a lot of the technology in the rocket, including its avionics computer software is being developed there.

One such piece was the launch vehicle stage adapter, which connects the top of the rocket to the bottom of its payload, in this case, the upcoming Orion crew capsule. It towered in the backdrop of Lightfoot’s presentation, half-covered in thermal protection foam: 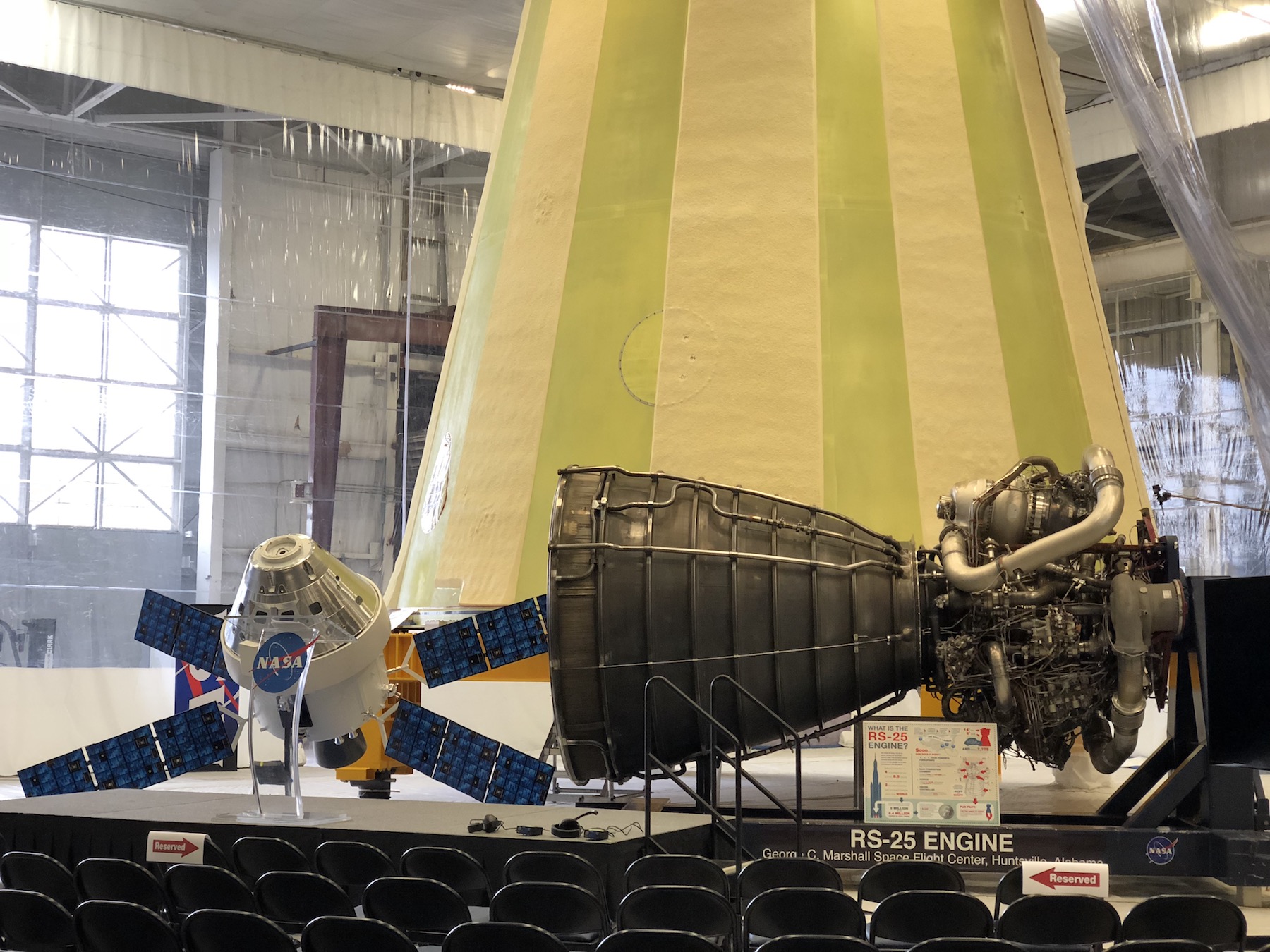 We also saw another adaptor that will sit directly below Orion. The back of this adaptor will be open to space when the rocket separates, and NASA is taking advantage of that to launch 13 cubesats on the rocket’s first launch in December 2019.

The cubestas will be ejected from those carriers that line the inside of the ring. There’s something special about this part that really caught my eye:

The inside of the structure carries the signatures of the team who built it. I love that. #NASASocial pic.twitter.com/2e0wU34c9t

One of the last stops for the day was in a giant building that housed a huge testing facility built to stress the engine mounts that will attach the RS-25 motors to the bottom of the SLS. It’s hard to judge scale, but this thing was over five stories tall: 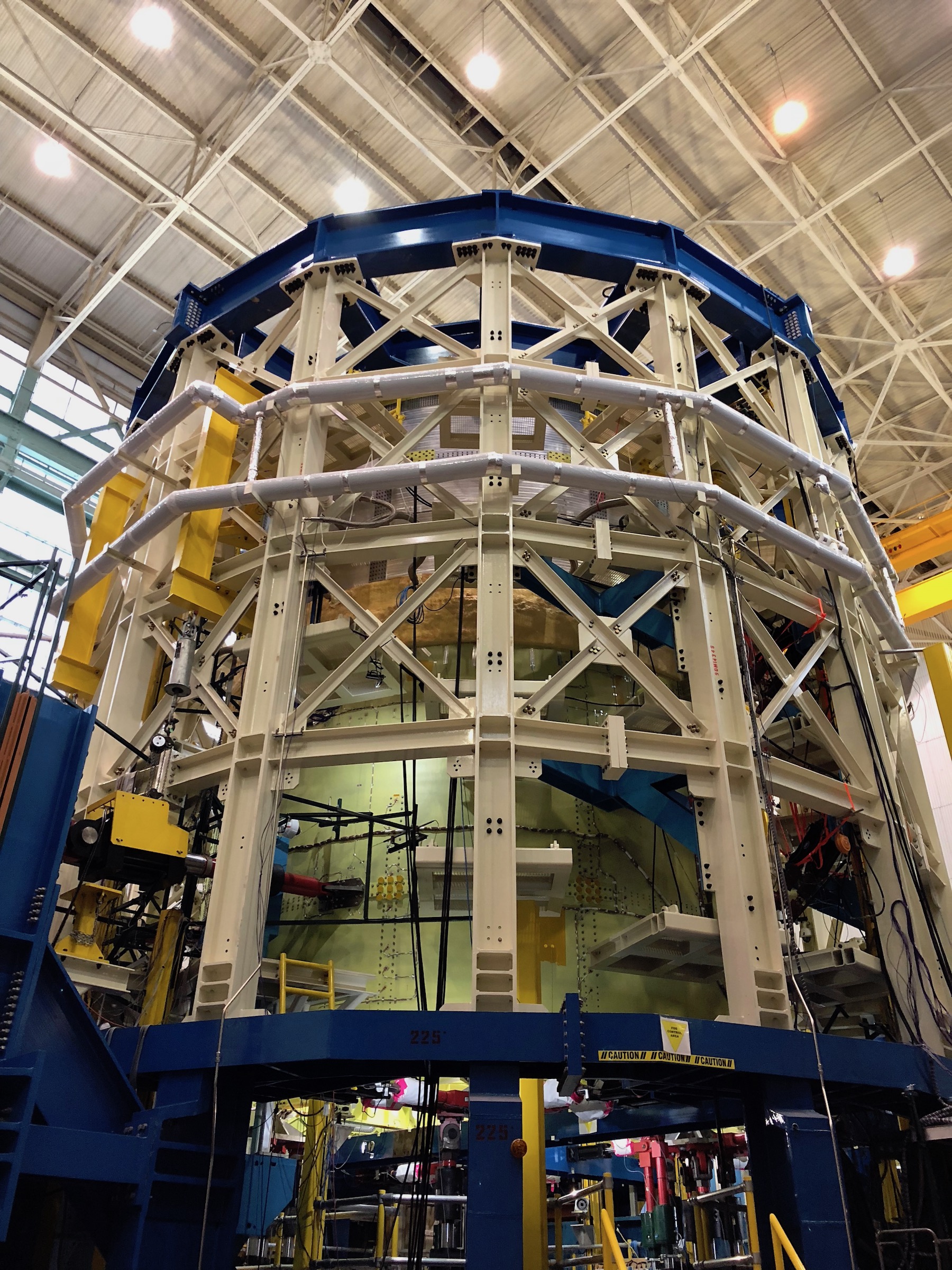 This custom-built test chamber was designed to mimic the stresses that would be applied to the part during launch and flight. The team was happy to report that it passed with flying colors. Now they just have to take it all apart.

We ended the day at the U.S. Space and Rocket Center. Their museum is incredible, and from what I saw, I really missed out by not ever going to Space Camp as a kid.

If I could sum up everything I saw at Marshall, it’s that NASA is busy. It’s easy to get distracted by companies like Blue Origin and SpaceX and forget that America’s space agency is hard at work building its next-generation heavy lift rocket and crew capsule.

Best I can tell, the shift in focus from Mars back to the moon doesn’t mean NASA is tearing up a bunch of work and starting over; the SLS and Orion can easily support either mission location, and work on planning a cis-lunar space station was already underway.

That’s not to say there’s not a lot to do. There are serious questions as to if the agency will be ready to return to cis-lunar space next decade, let alone land on the moon again. The current level of budgeting doesn’t seem to account for everything that would be need to make the National Space Council’s vision a reality.

What is certain, to me at least, is that the men and women who make up NASA’s nation-wide workforce are dedicated to their work. From keeping the International Space Station running smoothly to building that new rocket, NASA is humming along, doing what it does best: building systems for the advancement of science, discovery and humanity itself.