When you think about desktop Macs from the 90s, names like LC, Performa, Quadra and Power Macintosh come to mind.

That’s pretty understandable. Apple shipped a bunch of those models. Nine Macs bore the name LC, while there were 11 Quadras, 24 Power Macs and a whopping 44 Performas.1

Then there’s the Centris line of Macs. Here’s the list of models that wore that name:

Yep, just three Macs, all for sale for less than a year in 1993. In fact, the 660AV was for sale for a mere three months in the fall of that year, making my example a real treasure. 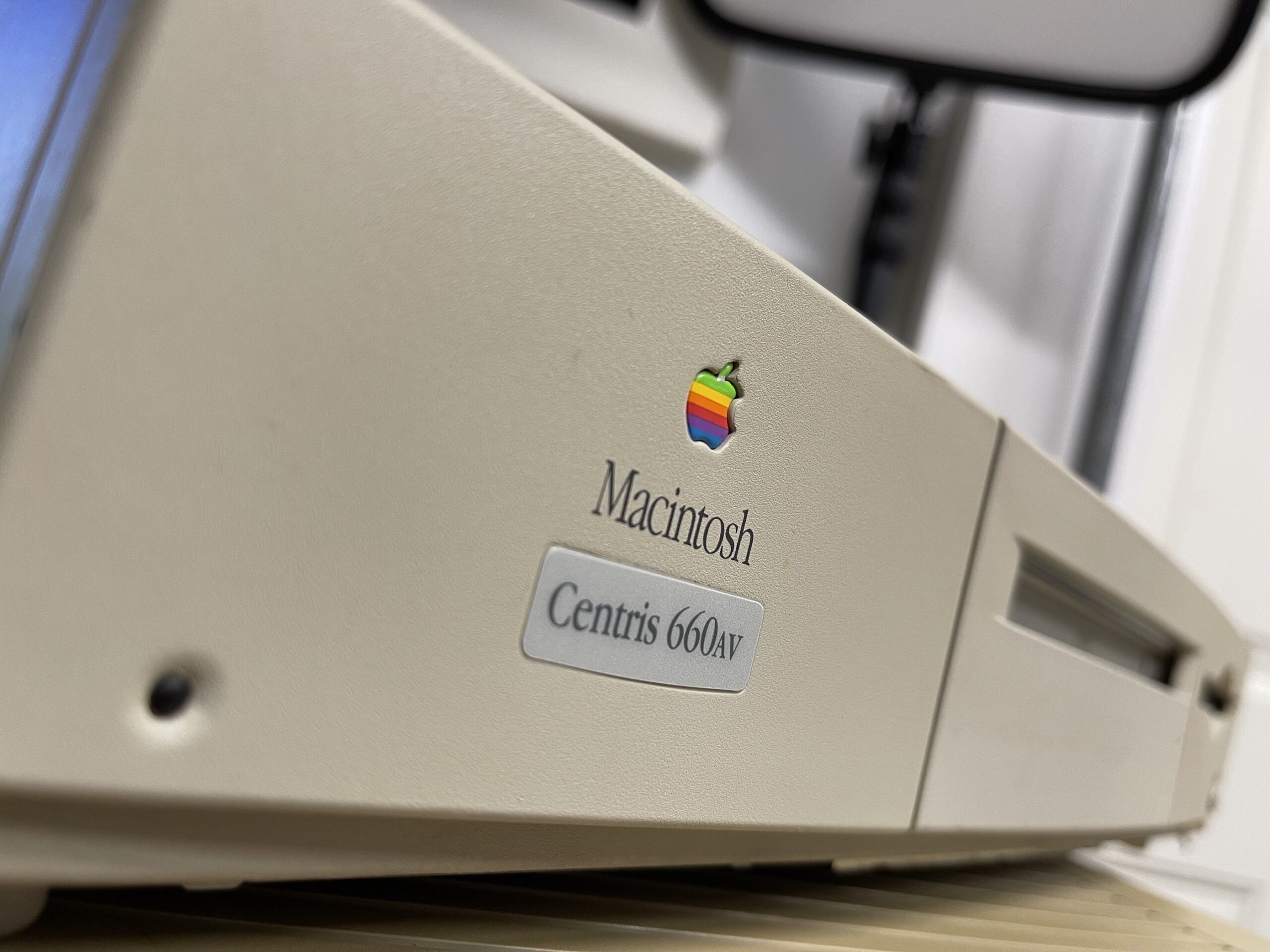 Apple.com still hosts a page outlining the specs of these machines. For the sake of completeness — and in fear Apple will notice this page once I’ve linked to it and remove it — I’ve replicated it here:

As the high-end model had the “AV” badge, it came with a few extra goodies:

It and the 610 both came in the “pizza box” form factor, while the more expandable Centris 650 lived in a recycled Macintosh IIvx case which was both taller and deeper. All three models came with System 7.1, and could run up to Mac OS 8.1 which shipped in early 1998.

Now that we’ve looked at the what of the Centris line, let’s look at the why. By this time, the LC line was anchoring the low end of the Mac product line, and the Performa was still mostly just rebadged LCs and Classic IIs. On the high end of things, the Macintosh II line had faded away, and Apple was replacing it with the 68040-powered Quadras. These machines were much more capable than the 68030-powered Macintosh II, and as the tech moved on, Apple put the 030 in service across the LC line.

All of this left a bit of a gap in the middle of things, and that’s where the Centris comes in, to the center of the Mac lineup. Apple put 040s in these machines, but they ran at slower clock speeds and ran with slower system busses. These machines also had lower RAM ceilings than the Quadras and two of the models shipped with fewer slots than the Quadra 800 that was for sale at the same time. With the Quadra 800 selling for $4,700, Apple had met its goal by clearly separating the two lines.

That said, there were similarities, as Russel Ito wrote in the October 1993 edition of MacUser, comparing the Centris 660AV and the Quadra 840AV, which shipped in July 1993:

As the Centris and Quadra monikers would indicate, Apple has built the AV machines on existing models, so some of what’s inside them is familiar. Each uses a 68040 (the 660AV has a 25-megahertz model and the 840AV has a 40-megahertz one), and both have the same expansion options as their predecessors, the Centris 610 and Quadra 800 – a single PDS that can accept an adapter for a 7-inch NuBus card in the 660Av and three NuBus slots in the 840AV.

Each machine ships with I megabyte of VRAM soldered onto the motherboard, enough to support as many as 16 bits of color (32,000 colors) on displays as large as 16 inches. The 840AV can accept an additional 1 megabyte of VRAM on SIMMs for 24-bit-color support on 16-inch displays.

Although they’re the first in the AV line, the Centris 660Av and the Quadra 840Av aren’t just isolated examples of cool technology. Apple considers the audio visual technologies in these machines — telephony, video, and speech — to be core technologies and has promised to spread them throughout most of its desktop product line. Certainly future Centris-level — and higher level — Macs will provide audiovisual capabilities, and those technologies will also carry forward to the upcoming PowerPC Macs, due next year.

As impressive as these machines may have been, the Centris wasn’t destined to last very long. Here’s Adrian Mello, writing in the December 1993 edition of Macworld:

Apple has simplified its product lines and renamed some Macs to suit their distribution channels. Performas arc still sold by mass merchandisers; LCs, through education channels; and Quadras and PowerBooks, by computer dealers.

Over at MacUser the same month, Maggie Canon wrote:

The Mac product line now consists of Quadra, Performa, LCs and PowerBooks. Period. Apple has dropped the name Centris, the LC line will be for the education market only and the Classics are being phased out in the U.S. Apple is targeting the Quadras and the PowerBooks at business users and the Performas at the home market.

The Centris name may have been killed, but the machines lived on as the Quadra 610, Quadra 650 and the 660AV. With the name change, all three models received speed bumps, with the 610 also receiving an FPU. Here’s a chart from the December 1993 edition of MacUser showing the whole Quadra line: 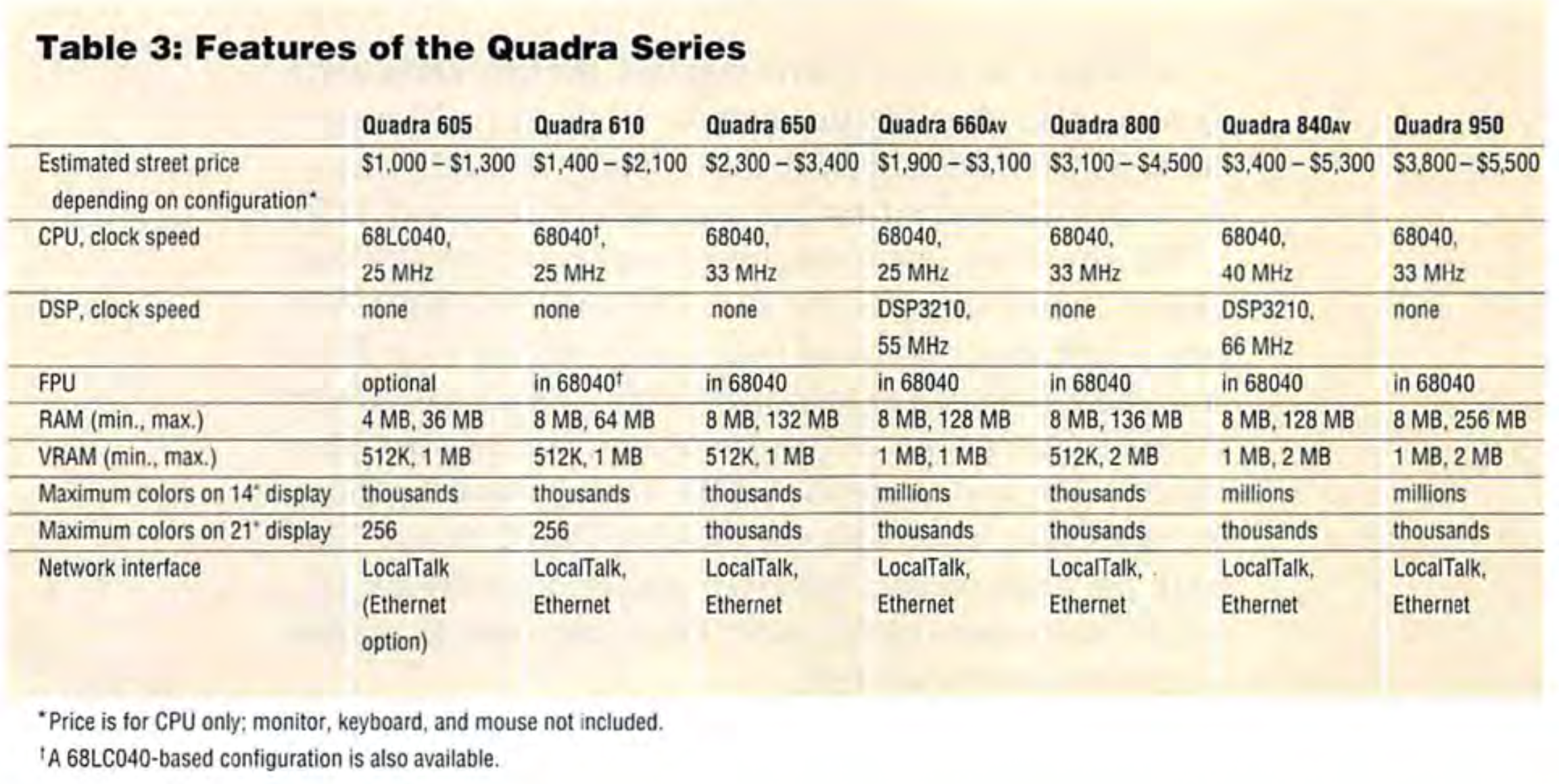 You can see our old Centris friends there in the middle, sitting above the newly-minted Quadra 605, which was on sale for just $1,000 and a bit of an outlier in the Quadra family.

So, in summary: The Centris line was the middle of the Mac line up in 1993, before being swallowed up by the up-market Quadra brand. That’s probably the most interesting thing about these three machines, but it’s a fun little story from the Mac’s dark years.