In my series 2001 Revisited, I’m covering Apple’s major announcements from 20 years ago. Today, we’re talking about the announcement of the original iPod, which took place during a small press event hosted in Apple’s Town Hall venue.

I haven’t been able to find a great copy of the video, but there is a full-length version on YouTube that’s passable:

The event is pretty subdued. 9/11 had taken place just six weeks before and cast a bit of a shadow over everything. Then there’s Jobs presentation, which is casual and friendly.

The first part of the event is taken up by Jobs talking about the company’s Digital Hub strategy as he demoed iMovie and iDVD running on a Titanium PowerBook. This event was nine months after the strategy was announced, and while iPhoto was still off in the future, things were coming along.

Jobs then turned to hardware devices. While the “iApps” were great, the lack of hardware to interface with them was a shame, he said. They chose music to get started, he said, because it was a very large target market, yet no clear market leader when it came to digital music.

Jobs said that Apple’s brand was a perfect fit for the market and that the company was well-positioned to take on things like portable CD players with a hard-drive-based player.

They named it iPod, but in true Steve Jobs fashion, he didn’t show the product right away.

Instead, he spoke about features, and the biggest one would become the marketing slogan for the iPod.

The iPod included a FireWire port, allowing support for fast transfers and charging.1 Users could expect 10 hours of music playback thanks to the iPod’s rechargeable battery.

Jobs then finally got around to showing off the device, with its stainless steel back and white front: 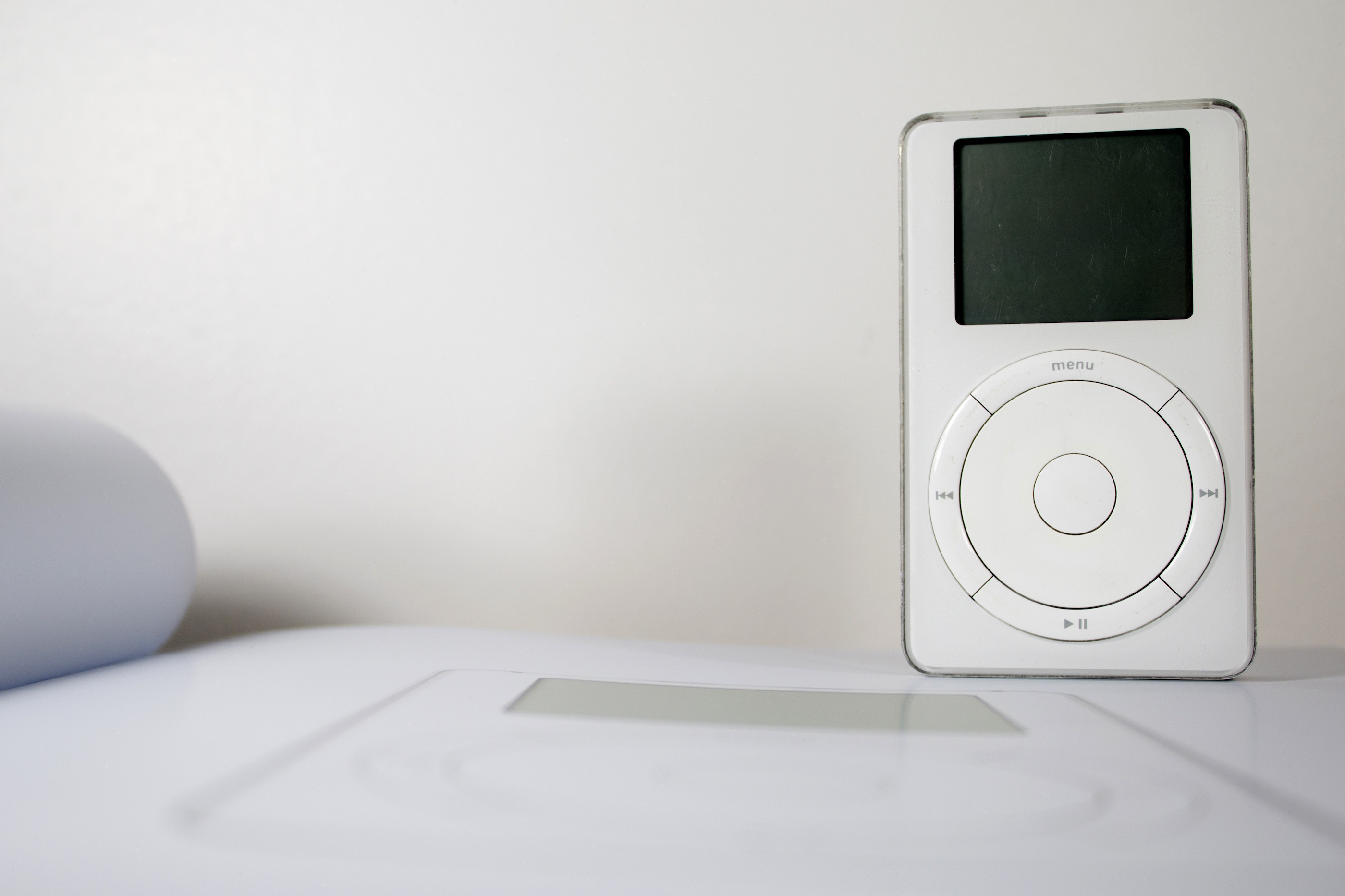 The design is now classic, but at the time, the iPod introduced an elegance to the market that just wasn’t present in other products. The black and white, backlit display ran at 160-by-128-pixels, and sat above a scroll wheel that physically turned. It may have lacked the grace that later iPods would have with their solid-state storage and click wheels, but the original iPod was still a stunner.

Those controls made zipping around a large music library fast and easy. Jobs showed these controls off with an overhead camera — after making a joke about biting his fingernails. The demo was simple and slow, but was effective at showing off what the iPod could do.

Eventually, Jobs makes his way to iTunes, announcing version 2 of the application. The update brought much faster CD burning, a new equalizer, crossfade support and more. 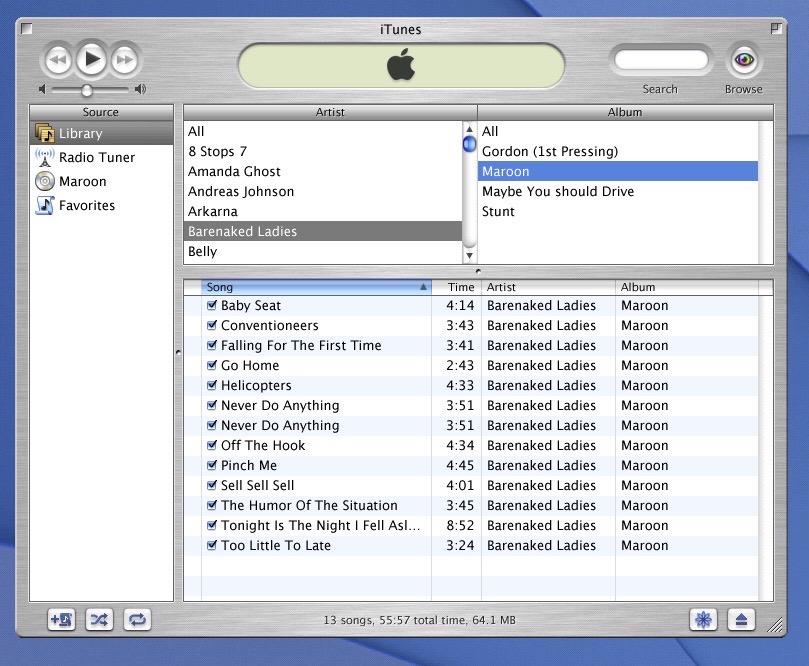 And, of course, support for the iPod. Here’s a bit from the company’s press release about how it worked:

Apple today announced iTunes 2, the next generation of its award-winning digital music software for the Mac that has been distributed to over six million users. iTunes 2 adds the three most requested features from iTunes users: MP3 CD burning, an equalizer and cross fading.

But iTunes 2’s most stunning new feature is its seamless integration with iPod, Apple’s new breakthrough portable MP3 player. When iPod is first connected to a Mac running iTunes 2, all the songs and playlists from iTunes 2 are automatically downloaded into iPod, and updated whenever the iPod is plugged back into the Mac.

Even though this was early days, the iPod and iTunes 2 combo had some clever features, like Auto-Sync. Here’s Apple:

iPod’s revolutionary Auto-Sync feature makes it easy to get your entire music collection into iPod and update it whenever you connect iPod to your Mac. Simply plug your new iPod into your Mac with the supplied FireWire cable, and all of your iTunes songs and playlists are automatically downloaded into iPod at blazing FireWire speed. Then just unplug and go. Whenever you plug iPod back into your Mac it will be automatically updated with your latest iTunes songs and playlists, usually in seconds. There has never been a faster and easier way to always have your up-to-the-minute music and playlists with you wherever you go.

If you really want to dive into Apple’s marketing of the time, don’t miss this grab of the original iPod web pages.

Then there’s this original ad:

The original 5 GB iPod sold for $399, starting a few weeks after this event. And while not all at once, the iPod changed Apple. Originally only available for the Mac, the iPod soon found its way to Windows, as did the forthcoming iTunes Music Store. As these events unfolded, Apple slowly changed from a computer maker to a company focused more on consumer electronics.

Five years after the original iPod was introduced — and a mere three months before the original iPhone was unveiled — Jason Snell wrote to mark the occasion:

Since its first release five years ago on October 23, 2001, the iPod has become one of the most recognizable products in the world. It has transformed Apple’s business and its public image, and is probably responsible for a “halo effect” that has improved the Mac’s image and fortunes as well. Whether you’re a rabid iPod lover or someone who just doesn’t see why the iPod’s such a big deal, it’s hard to dispute the gigantic impact the iPod has had on our technological world.

On the day the iPod was unveiled, none of us knew we were witnessing the arrival of the first iconic product of the 21st century. We had a pretty good idea we were going to see an Apple music player, but we got more than we were expecting.

I’ve often wondered if Apple knew what was on the horizon in terms of its business when it launched the iPod. It catapulted Apple to financial heights it had never seen, and took it from being that company that made weird computers to one that everyone knew.

Some Other iPod Coverage:

Lots of folks are marking this anniversary. Here’s some other cool stuff to check out: