Marco Arment’s excellent podcast client Overcast has been updated today to version 2022.2. The new build includes what he is calling “Phase One” of an app-wide redesign.

As you can see from these screenshots, quite a bit is new: 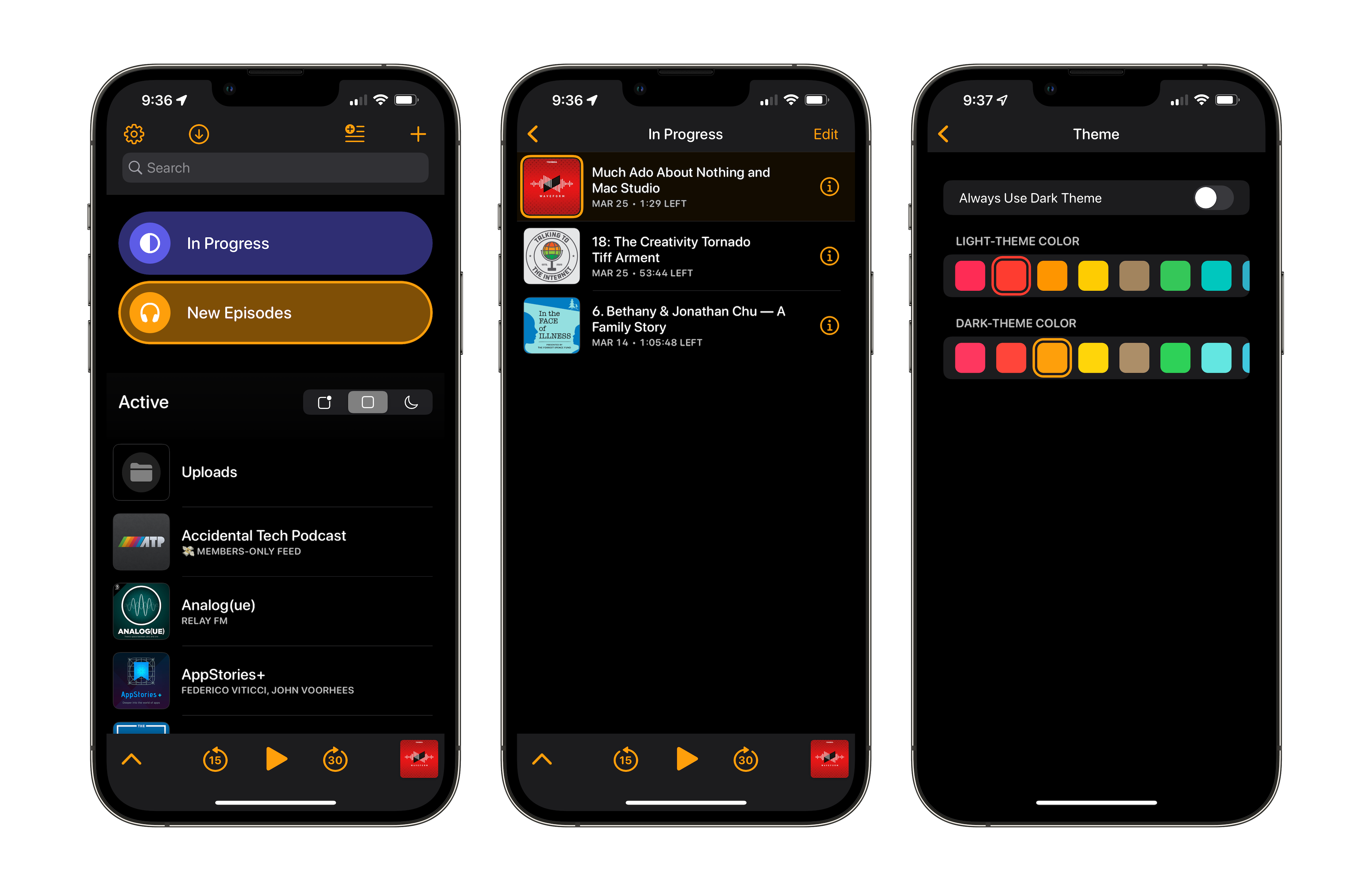 The biggest improvement comes to the styling of playlists. I’m not a huge playlist user as you can see, but I can appreciate this change. I know some folks have a lot more playlists than I do, and I think the ability to customize the color and icon of each playlist individually really adds a lot of fun to the app.

In addition to the styling, there are some new tricks when it comes to creating playlists, including the ability to set one up for in-progress episodes. I added that one as soon as I saw it.

The main screen also now has the ability to show recent episodes. This feature and the new playlist options are available with a tap at the top of the screen: 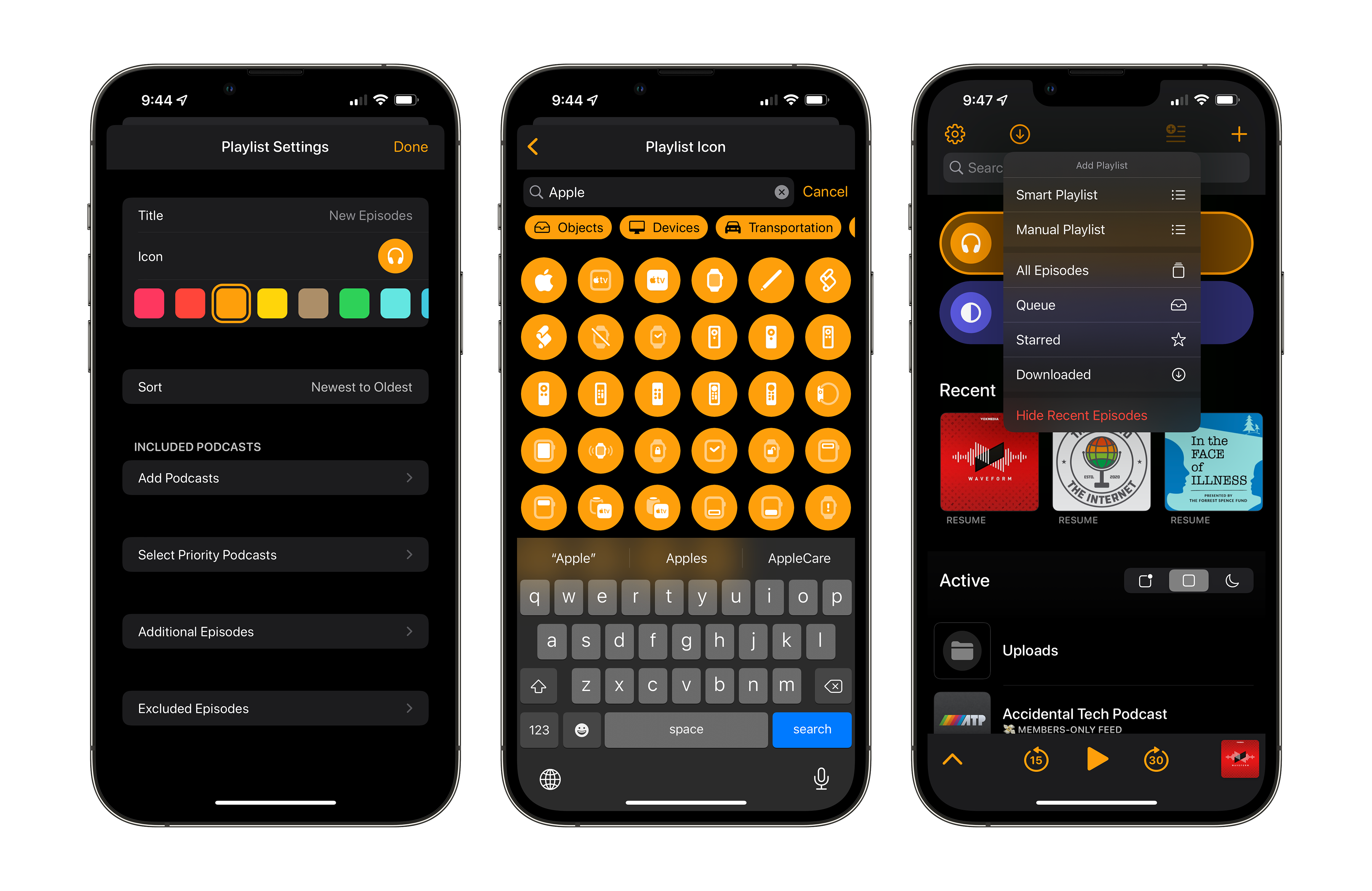 Below the playlists section, the list of podcasts can now be automatically filtered into three buckets:

I have some feelings about that last one. For a while, Overcast has shown how often a podcast is published. For example, on the Connected Pro screen, it shows “Wednesday Afternoons,” reflecting when I publish the show each week. After a time, if no new episode appears, Overcast would label a show as Inactive.

I like this attention to detail, but as a publisher, I don’t want a podcast client deciding when a show is “inactive,” and stashing it off in another part of the app’s UI. At Relay FM, most of our shows publish on a regular basis, but not all of them do. Other networks and publishers often do seasonal podcasts, which may show as “inactive” in between seasons. I understand wanting to filter these out for listeners, but I also think listeners can work out what’s going on in a feed by looking at the publication dates on episodes.

Beyond that, the Inactive filter also includes shows with episodes I’ve listened to without subscribing to the podcast itself. I tend to do this to check out interviews on shows I don’t normally listen to, and wouldn’t mind them being in a section on their own.

For a fuller review, check out John’s post on MacStories. He has a nice bit on how the “Inactive” filter works:

The inactive list is worth explaining, though, because it wasn’t entirely clear to me how it worked when I first tried it. What threw me off is that in addition to a handful of shows that I knew hadn’t published an episode for a very long time, my inactive list included shows like Relay FM’s Connected, which published an episode a couple of days ago. The reason is that Overcast’s inactive list combines shows that haven’t published an episode recently with those that you no longer follow and where you manually deleted all episodes from your library, which is why Connected showed up. Months (probably years?) ago, I subscribed to the Relay membership version of Connected, unsubscribed to the ad-supported version, and deleted old episodes. I suppose this is a way to easily revisit shows that you don’t subscribe to but sometimes download episodes of, but I think it’s likely to confuse some users because of the way it combines inactivity from both a show and user perspective into one list.

(I totally understand my nitpicking about “inactive” shows is very much a Owner-of-a-Big-Podcast-Network problem that no one else may care about, but after reading John’s review, I think the label is a bit confusing. Hopefully, Marco revisits it in a future version.)

All in all, the changes to the playlists feature and the main screen of the app make it easier to manage larger libraries, and I’m a fan of them.

I’m also a fan of the revised theme. SF Rounded is used heavily, and I think it looks really nice. And I straight up love being able to pick a color for use in my theme. Dark Mode + Orange is the one true way to use the new version of Overcast.

Overcast has been my podcast client of choice since it launched, but I’ve noticed the UI feeling more and more out of date. This update has things moving in the right direction, and I can’t wait to see what comes next.