Over the span of two decades, Apple made a bunch of iPods. The original may have been just a single 5 GB player delivering 1,000 songs in your pocket, but the line spread from there to meet the needs of many more users. The iPod mini, iPod shuffle, iPod nano, iPod photo, iPod classic and iPod touch all enjoyed time on store shelves.

A couple of special-edition iPods were created, such as the Harry Potter Collector’s iPod released in 2005.

Perhaps even more famous was the U2 iPod.

The first-generation U2 iPod is probably the most well-known. To create it, Apple took a 4th-generation iPod, but tweaked the colors and had the signatures of the band members engraved on the stainless steel back of the iPod: 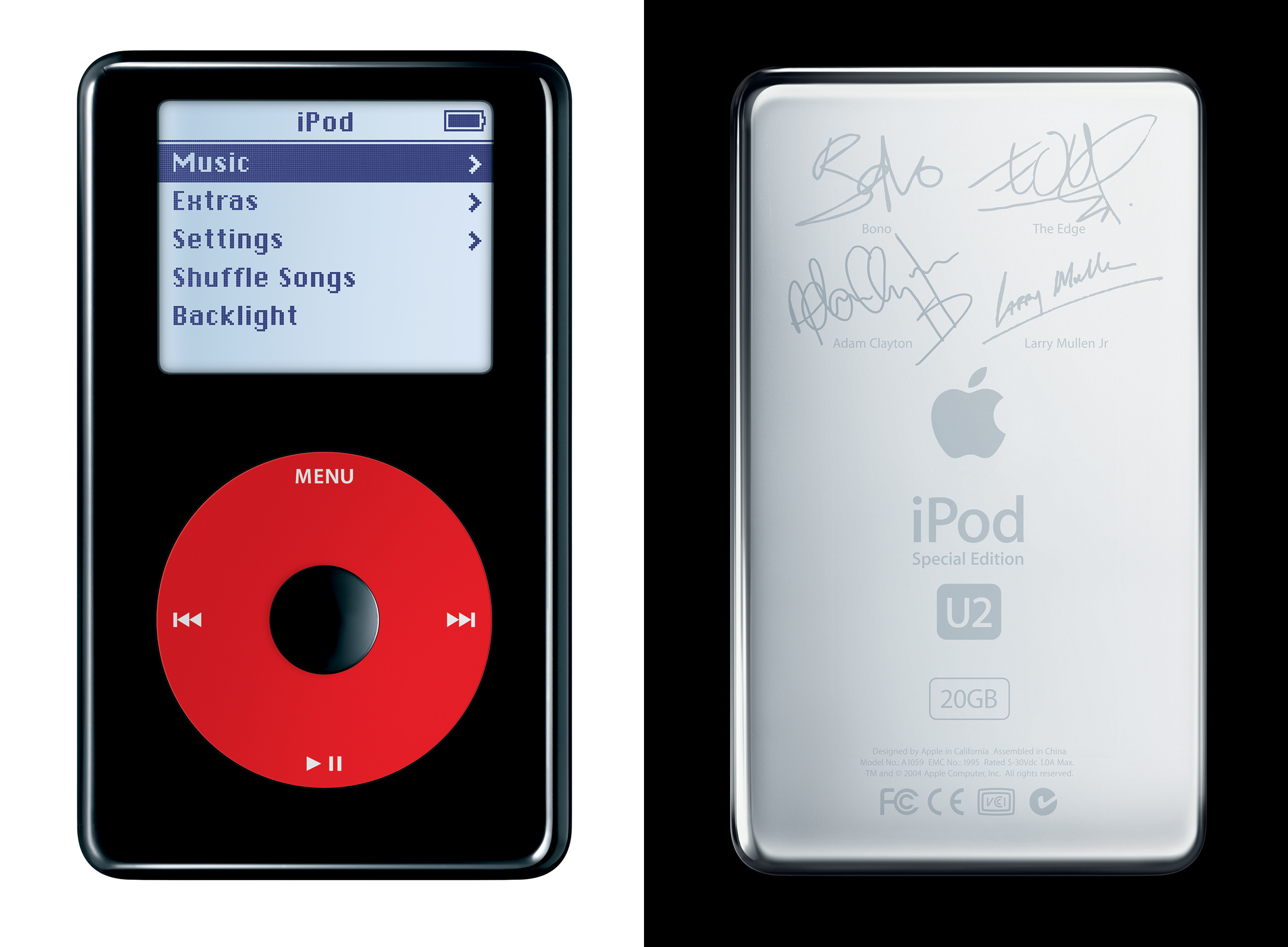 Over the years, I’ve heard people say that this iPod came loaded with all of the band’s music, but that isn’t entirely true. Here’s a bit from Apple’s press release at the time:

Apple has created the online music industry’s first-of-its-kind “Digital Box Set.” The first digital box set, “The Complete U2,” will contain over 400 tracks, including all of the band’s albums and over 25 rare and unreleased tracks. U2 fans will be able to purchase and download The Complete U2 with just one click on the iTunes Music Store in the US and Europe beginning in late November for just $149.

In the box for the U2 iPod was a coupon to knock $50 off the cost of this box set, justifying the cost increase and enticing U2 fans to plunk down $100 on the iTunes Music Store.

Somehow, a page about all of this has survived on Apple’s website as of this writing: 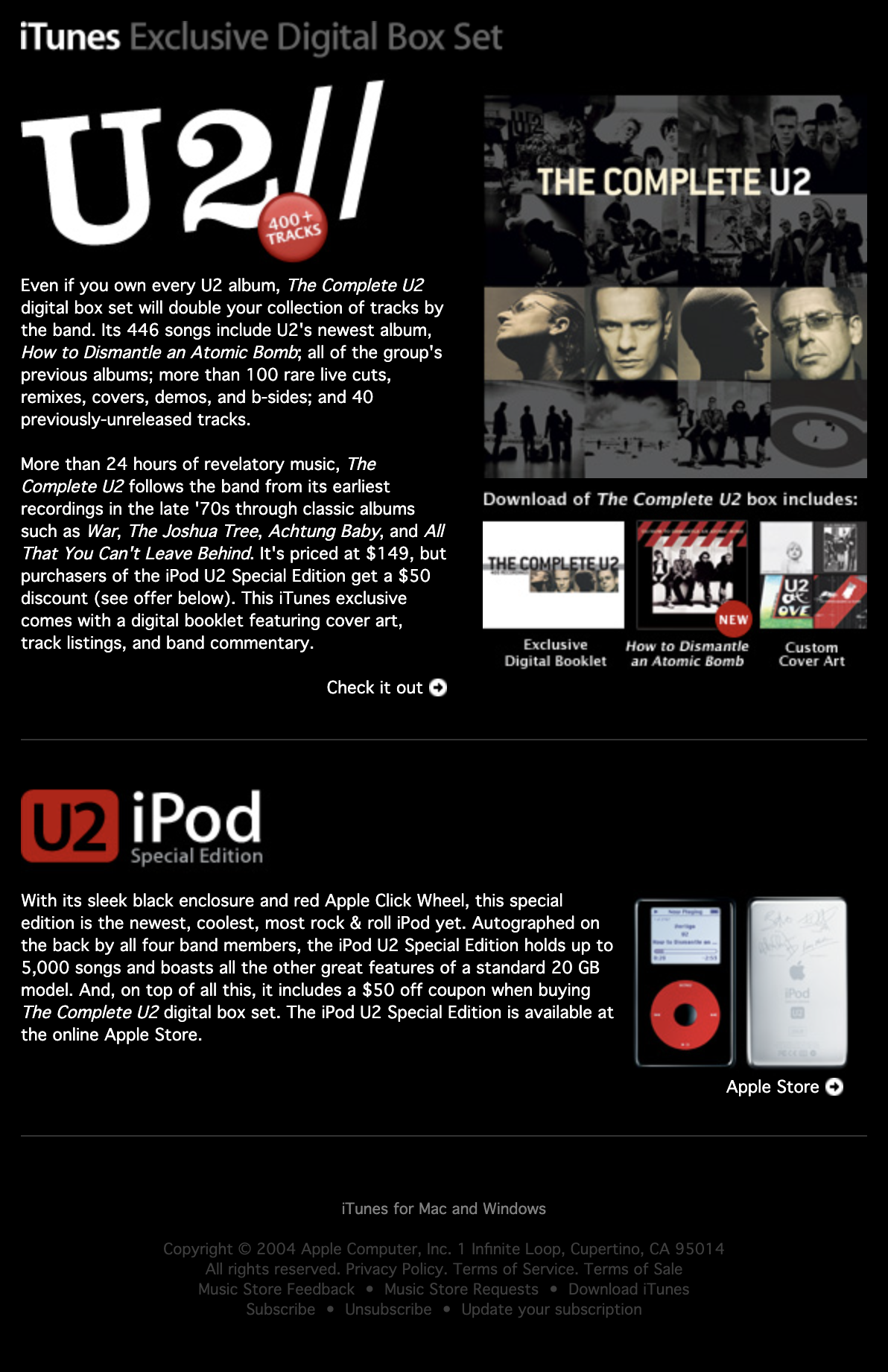 In the summer of 2005, Apple merged the iPod and iPod photo lines:

This change included the U2 iPod:

The 20GB and 60GB iPods for Mac or Windows are available immediately worldwide for a suggested retail price of $299 (US) and $399 (US) respectively. The new iPod U2 Special Edition also includes a color screen and is now more affordable at just $329, and the 1GB iPod shuffle is now just $129.

In June 2006, the U2 iPod was updated for the third and final time to bring it in line with the 5th-generation iPod that was introduced in September 2005. Here’s Apple PR:

Apple today introduced the new iPod U2 Special Edition as part of a continued partnership between Apple, U2 and Universal Music Group (UMG). The new U2 iPod is based on the fifth generation 30GB iPod and holds up to 7,500 songs, 25,000 photos or over 75 hours of video and features a distinctive, all-black stainless steel enclosure, red Click Wheel and custom engraving of U2 band member signatures. U2 iPod customers will also receive 30 minutes of exclusive U2 video downloadable from the iTunes® Music Store. The new U2 iPod is available immediately for $329.

“We’re thrilled to continue working with one of the greatest bands in the world to bring U2 fans a special edition of the world’s best digital music player,” said Greg Joswiak, Apple’s vice president of worldwide iPod Product Marketing. “With its distinctive new design, including an all-black stainless steel enclosure, the new U2 iPod is sure to be a hit.”

I have to admit it does look pretty cool: 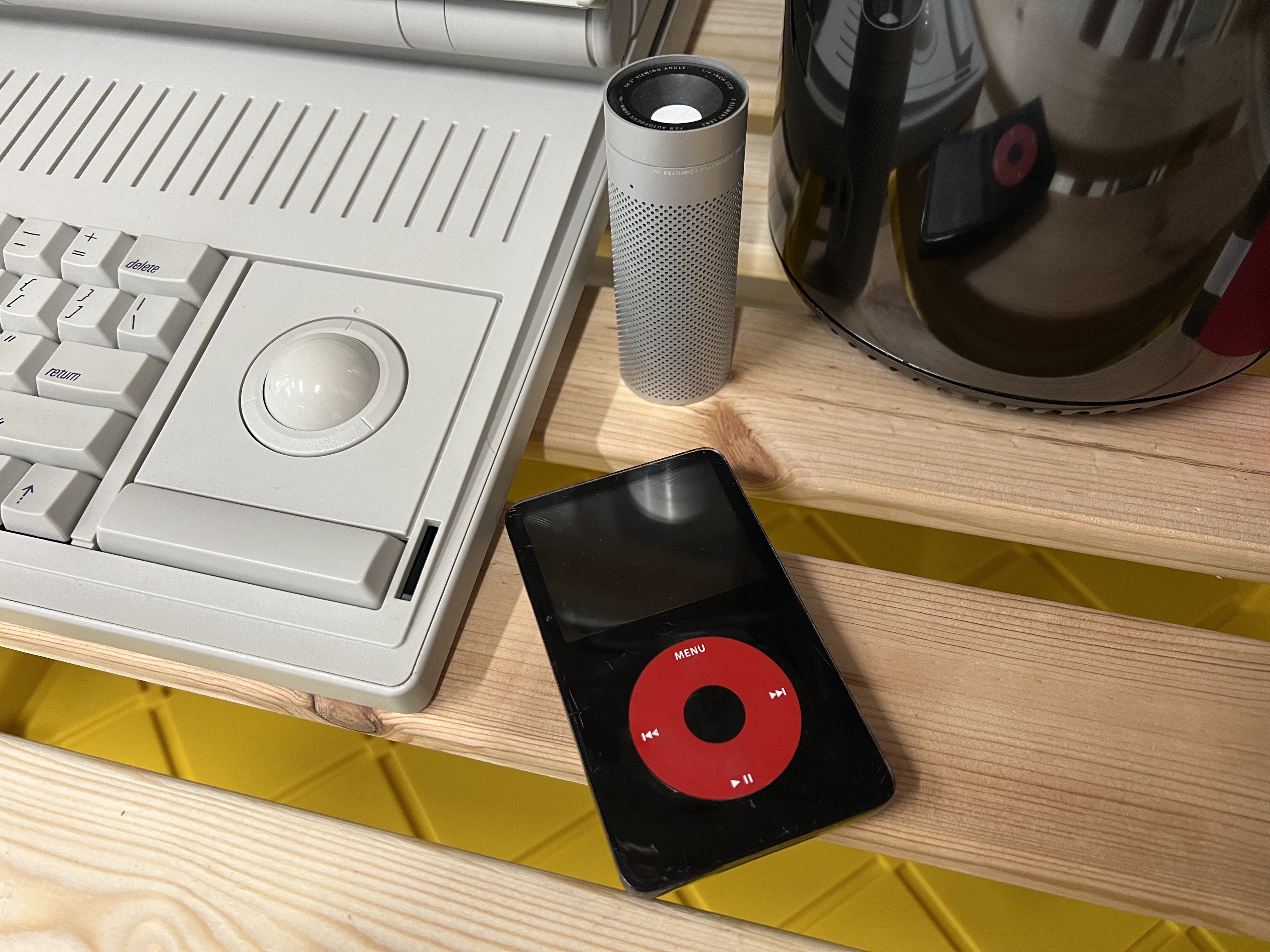 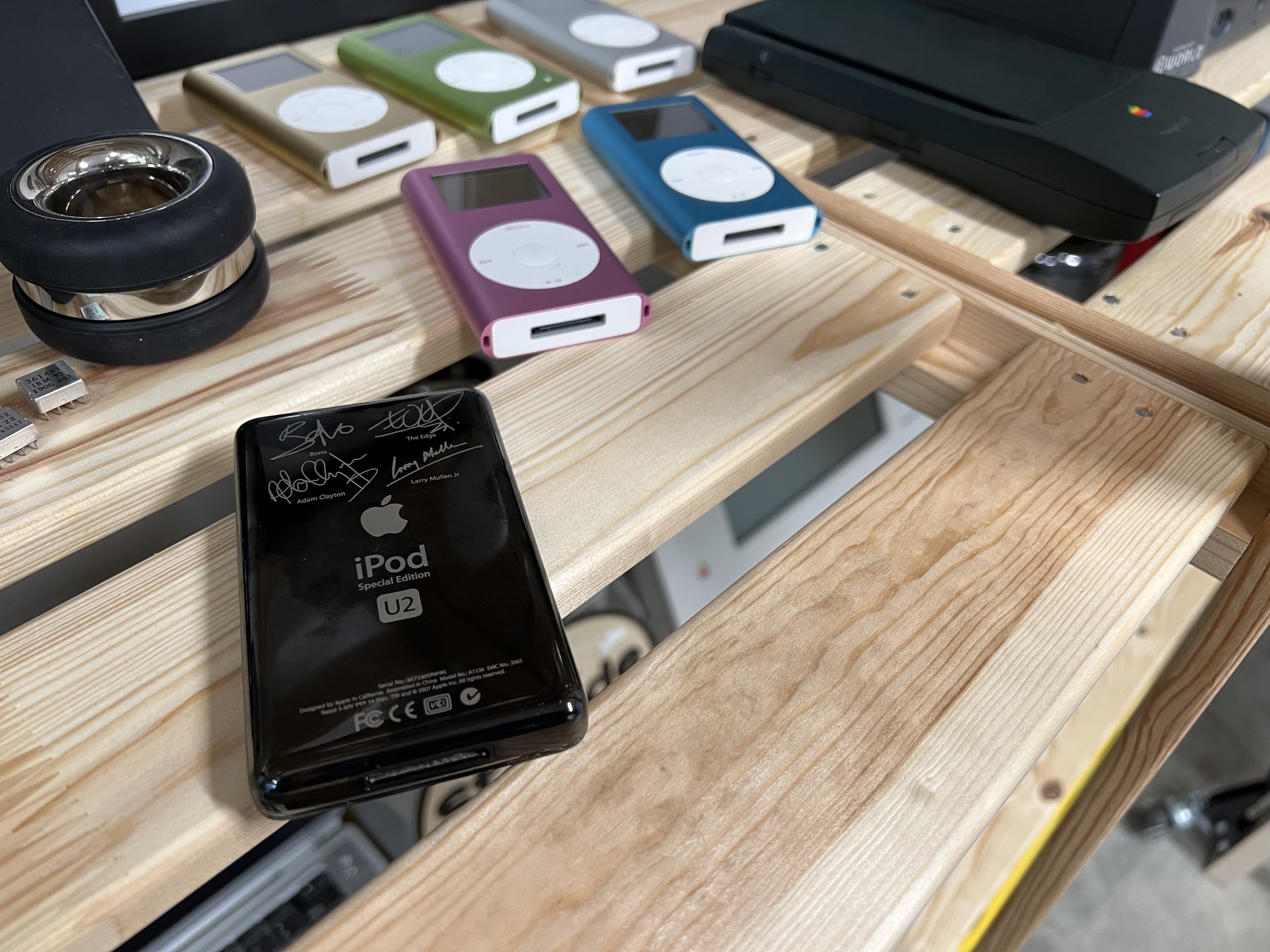 This version of the U2 iPod was 30 GB in capacity and ran $329. Instead of “The Complete U2,” customers of this iPod got a coupon for 30 minutes of exclusive U2 video content downloadable from the iTunes Music Store. It was updated when the 5th generation iPod was revised in September 2006, but quietly went away when the iPod classic was introduced in 2007.

In 2014, U2’s Songs of Innocence was automatically added to the iTunes libraries of some 500 million users, but that’s a story for a different time.