My work machine is a 2.8 GHz Core2Duo 15-inch MacBook Pro with the matte screen and 8 GB of RAM. It’s the fastest notebook I’ve ever used. It gives our 3.2 Ghz Core i3 27-iMac at home a run for its money. Most articles I’ve read by people who have upgraded to a SSD have done it to older machines. I was skeptical of what kind of difference it would make in an already fast machine, to be honest.

It turns out that this is the single best upgrade I’ve ever done for any computer. Period.

I opted for the 115 GB Mercury Extreme Pro SSD from OWC. It has some great reviews, and was the best bang for the buck that I could find.

I moved my stock 500 GB, 5,400 RPM hard drive into my MacBook Pro’s SuperDrive using OWC’s “Data Doubler” bracket. Unlike many similar products that use stamped metal, this bracket is just a frame, which seemed better for weight and heat considerations. It’s not flimsy by any means, though. It feels just right, and was a breeze to install. 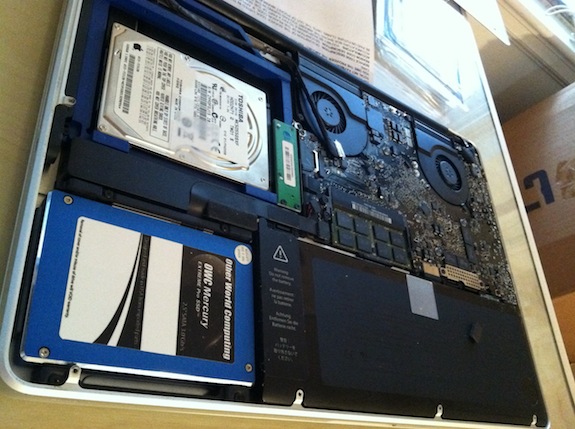 I didn’t purchase an enclosure for my SuperDrive. Time will tell if I regret that. For now, I’ve enabled Remote Disc on my MacBook Pro, so I can share another computer’s optical drive if needed. I installed some software from our home iMac’s SuperDrive with no problem.

I’ve got OS X, my applications and my home folder all on the SSD. However, since it is only 115 GB in size, and my user folder was over 200 GB on its own, I ended up just keeping my user library and my Dropbox folder on the SSD. The spinning HDD has my Documents, Downloads, Movies, Music and Pictures folder on it. These folders are symlinked to my home folder for ease of use.

A nice side effect of this arrangement is that I can set the option for OS X to sleep the hard drive when it isn’t in use, which has helped my battery life greatly, as the drive doesn’t have to spin all the time.

While this setup sounds complicated, I don’t think it’s that bad. It lets me enjoy the benefits of having a SSD, but without giving up having some serious on-board storage.

This machine was already fast, but now, it’s simply incredible. The SSD makes everything faster. Apps launch without a single bounce in the Dock. It wakes from sleep and starts up faster than ever. Logging in (which includes launching about 6 apps) happen in the blink of an eye.

When I was reading reviews of the new MacBook Airs, I often wondered how such slow machines could feel so fast. Now I know — it’s all about the SSD. Spinning hard drives offer cheap storage, but the 5,400 RPM drives Apple continues to ship in its notebook line are painfully slow. 7,200 RPM drives are a step in the right direction, but solid-state drives are clearly the future.

I’ll take this over a flying car any day.