Over the past few years, I’ve been rather vague about my place of employment when talking or writing on the Internet. Not that my boss doesn’t know about 512 — he does — but I just felt that my life would be easier if people at work (locally and beyond) didn’t know about my online braaaaaaand.

As I recently announced that I’ve taken a position with a different company, I felt like I was finally able to write about what I’ve been up to for the last four years.

In February 2010, after the Apple-Authorized Service Provider I helped form bit the dust, I became the fourth staff member at The Salvation Army Ray & Joan Kroc Corps Community Center in Memphis.

Yes, that’s the full name. It’s on the building and everything.

I came on board as the IT Manager just about a month before groundbreaking. I was handed a flash drive with a set of blueprints, shown a desk and was tasked with designing, installing and running the IT and AV infrastructure of the 104,000 square-foot community center.

I was drawn to the project for several reasons. Not only was it a huge opportunity for my career, The Salvation Army’s vision for the Kroc project got me excited.

At her death in 2003, Joan Kroc (widow of Ray Kroc) gave The Salvation Army $1.5 billion of matching funds for the construction of 30 or so Kroc Centers across the United States.

(The first Kroc Center — in San Diego — opened when Joan was still alive, and has served as the template for the other centers.)

The Memphis Kroc Center is unique in its scope, and its mission to bring neighborhoods with different economic and social classes in a positive environment still makes me smile. “Arts, Education, Recreation & Worship” was the mantra, with this statement serving as the heartbeat:

The Kroc Center is a safe, caring and exciting place in our community where residents of all ages, races, educational backgrounds and economic means can come together to learn, grow, and explore their potential and to experience God’s love in the process.

To fund after-school programs and community outreach, all Kroc Centers have fitness and aquatics centers that people have to join to use.

After undergoing a rigorous application and selection process, Memphis became eligible to receive a matching gift from the Kroc Trust in 2005.

In March 2010, we held our groundbreaking ceremony. It was freezing and pouring rain, but we had hundreds of people there, excited about the new project happening at the center of the city. 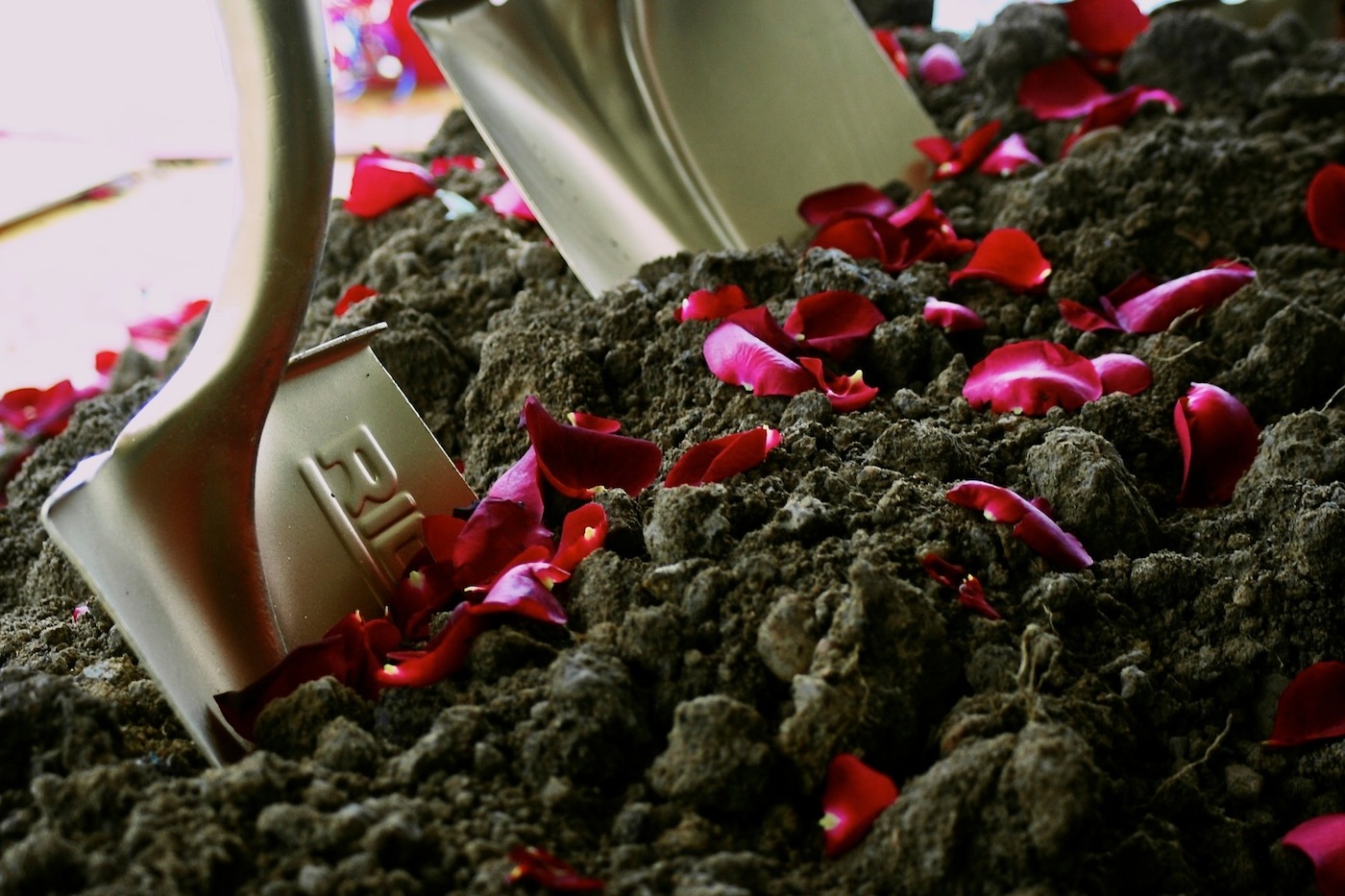 The location of our Kroc Center is unique. Located on what was once known as the Mid-South Fairgrounds, the land has a rich history.

The Kroc Center sits on the south-west corner of the property, on 15 acres purchased from the city of Memphis at market value.

The demographics of the area are super interesting. Here are some facts about the location:

After Groundbreaking, construction started. One of the first items of business was removing the old pools from the property. The one in the photo below was the original pool, built in the 1920s. At the time, it was one of the largest salt water, zero-depth-entry pools in North America. 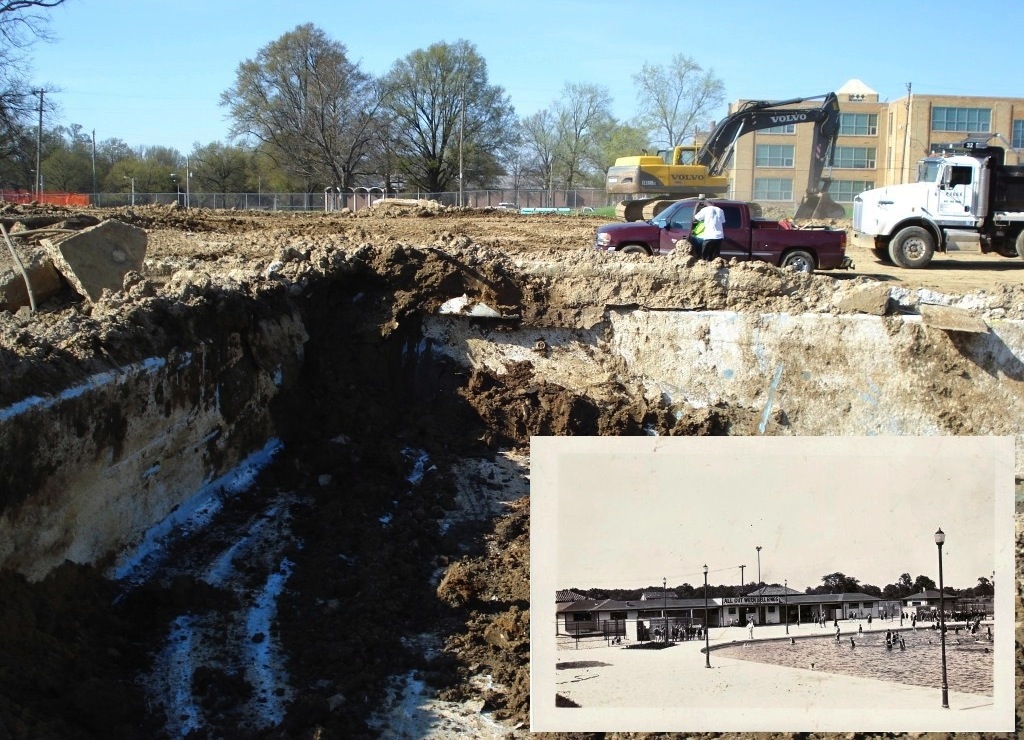 It was replaced later by a smaller, more modern pool until the city closed it sometime in the 80s. The concrete was pulverized and recycled in the Kroc Center’s aquatics area.

The concrete recycling was part of the Kroc Center’s bid to become LEED certified at the silver level. Another huge component of the bid was two 35,000 gallon tanks designed to hold, filter and re-use rain water collected from the roof to water the two NCAA-sized soccer fields on the property. Here, my boss Steve jokes about moving one of them: 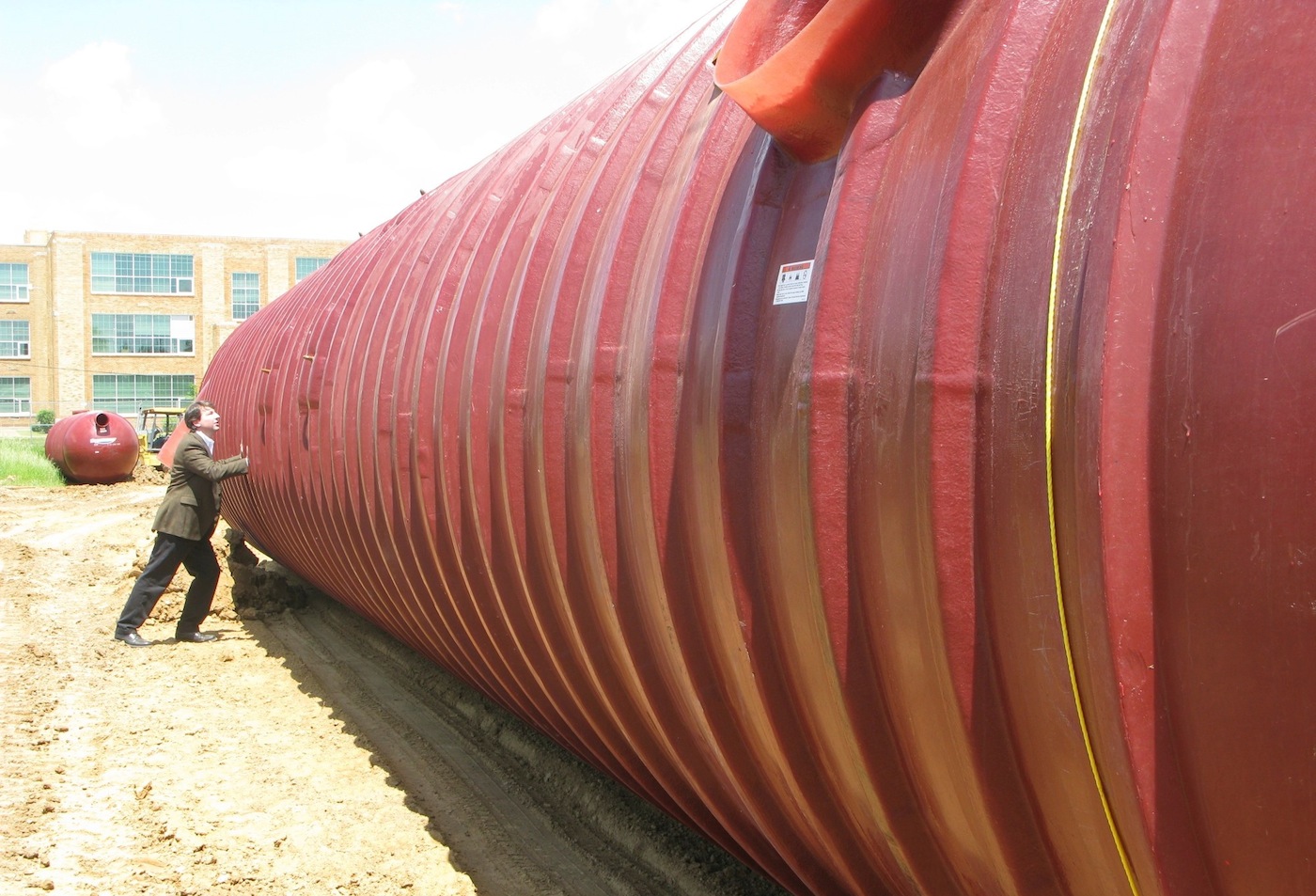 As ground work continued, the first concrete was poured over the summer, and the city of Memphis began work on Tiger Lane, a greenway and tailgating area in the place of what was abandoned buildings left over from the Mid-South Fair days.

Our staff grew, and I worked mostly on what would become the $1.1 million audio video contract for the building.

I know a lot about projectors, amps and themed LED lights now.

By the end of June, the first steel for the Challenge Center and gym was going up: 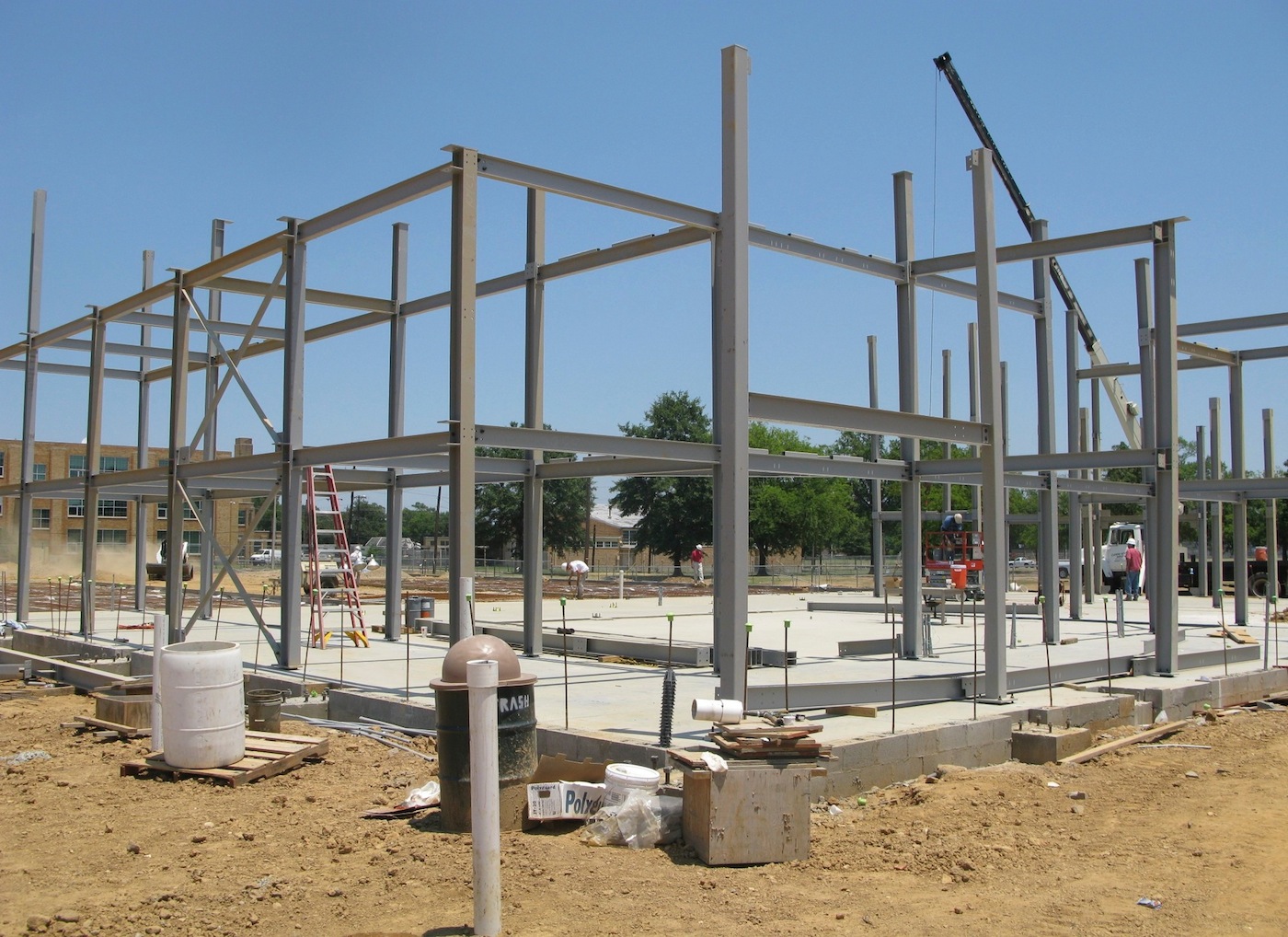 The Challenge Center is unique to Memphis’ Kroc Center. The three-story area is one of the world’s largest examples of experiential learning. Through “missions” in 12 themed rooms (driven by Apple TVs, oddly enough) to ropes courses and live music, students, families and community groups learn and grow together. 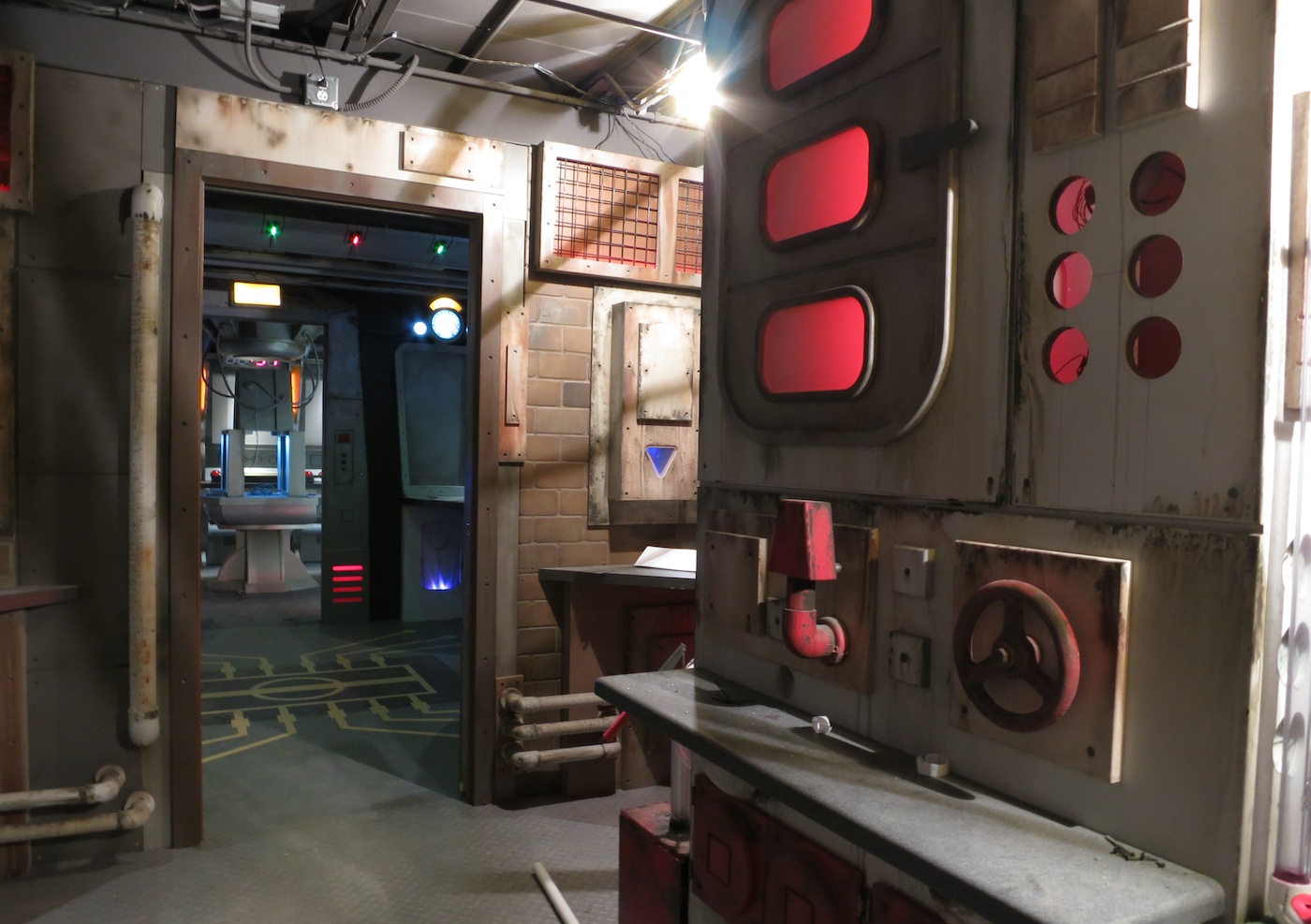 On either side of the Challenge Center, there’s a wall of stages, designed and built for youth and community members to play in a “concert environment,” even if they aren’t 21 and maybe aren’t that good:

As the summer of 2010 rolled on, construction continued at a steady clip. The gym continued to grow, and other portions of the building began to take shape as footings and slabs were put in place. 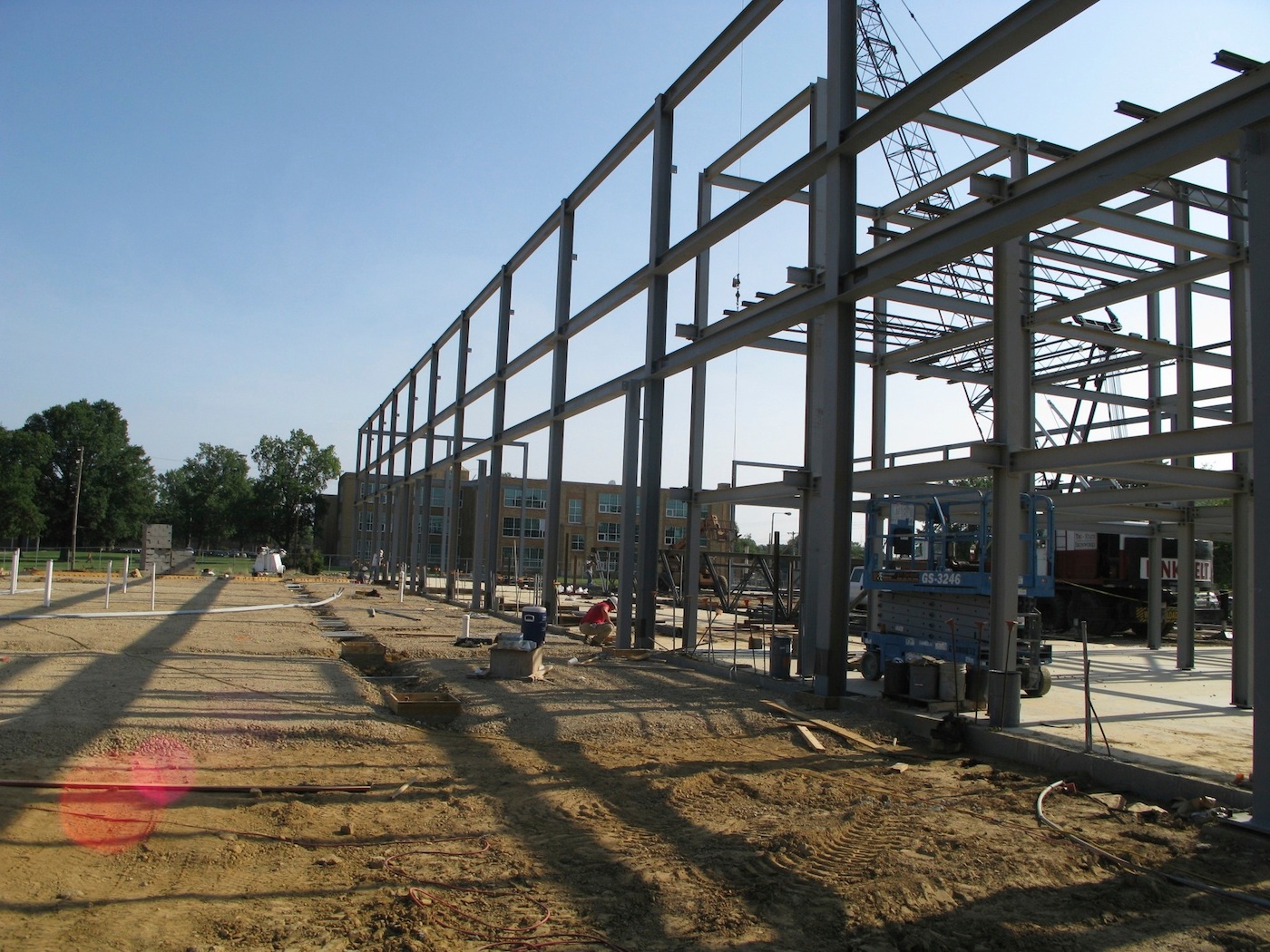 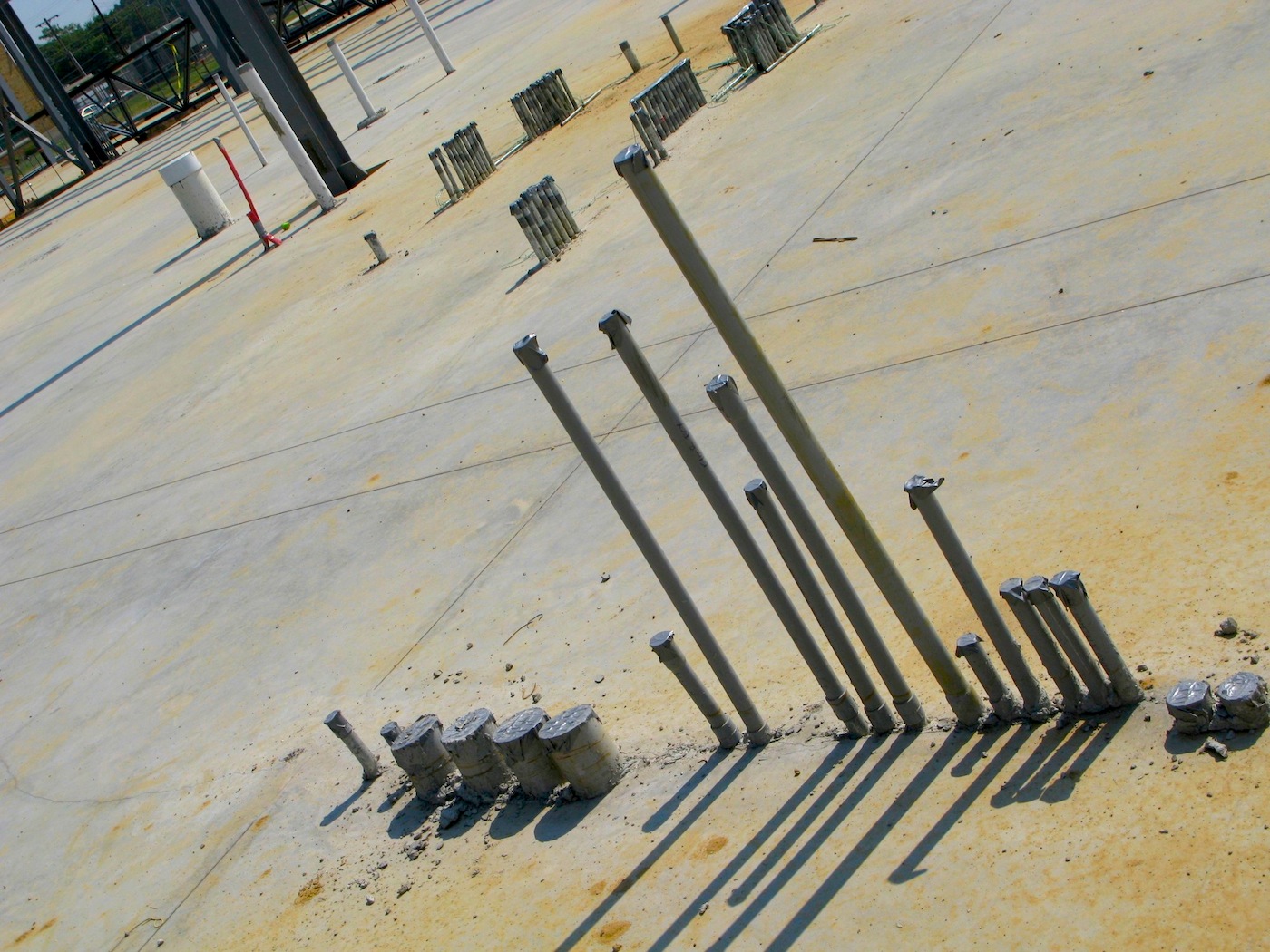 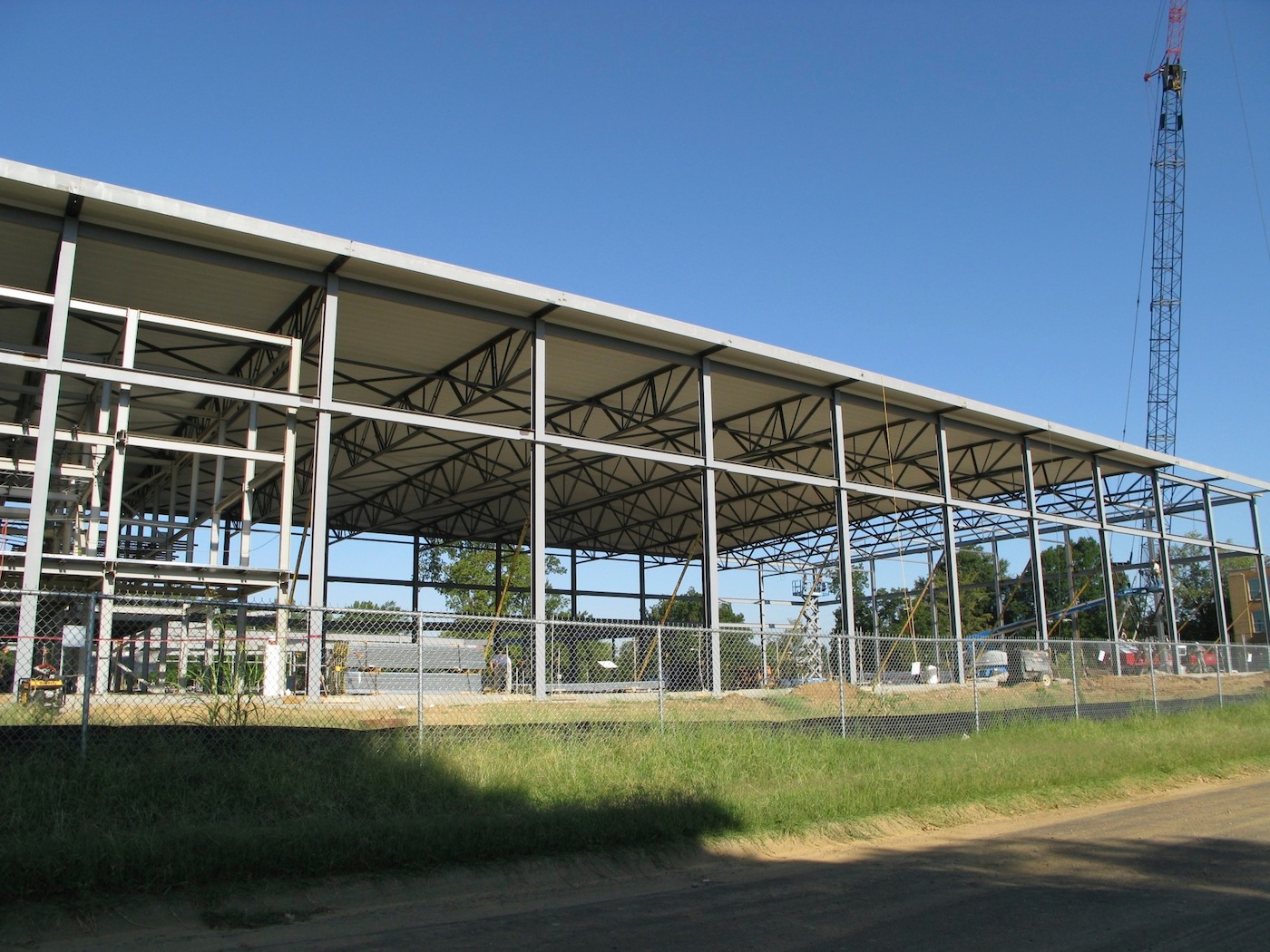 Some issues with the steel structure arose, and construction slowed for a year or so. Things never stopped, however, and more of the building seemed to appear every month.

Our staff was still pretty small, and all of us were very close. As people do in situations like this, jokes and pranks were common. 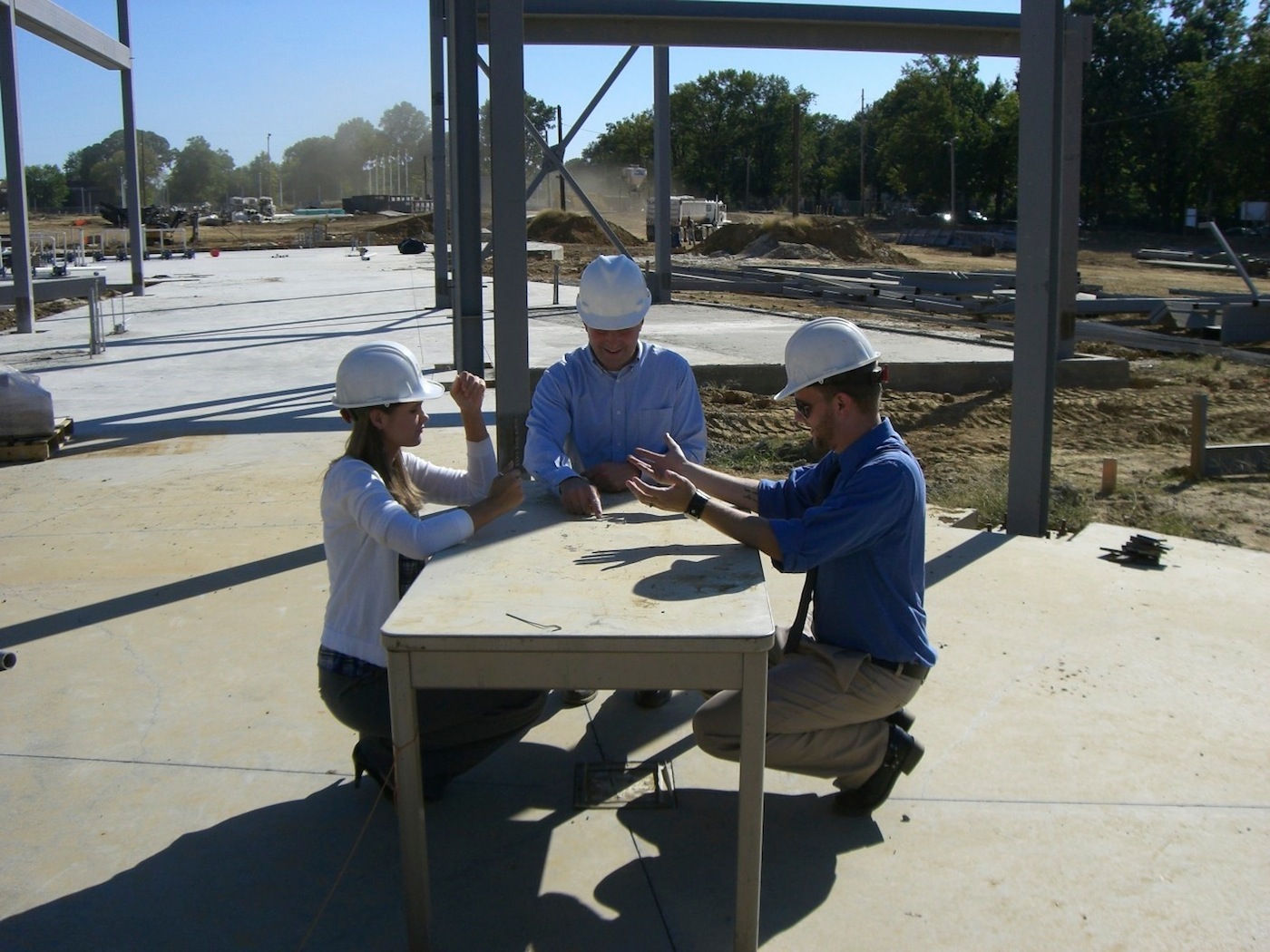 I even filled a co-worker’s space with chairs: 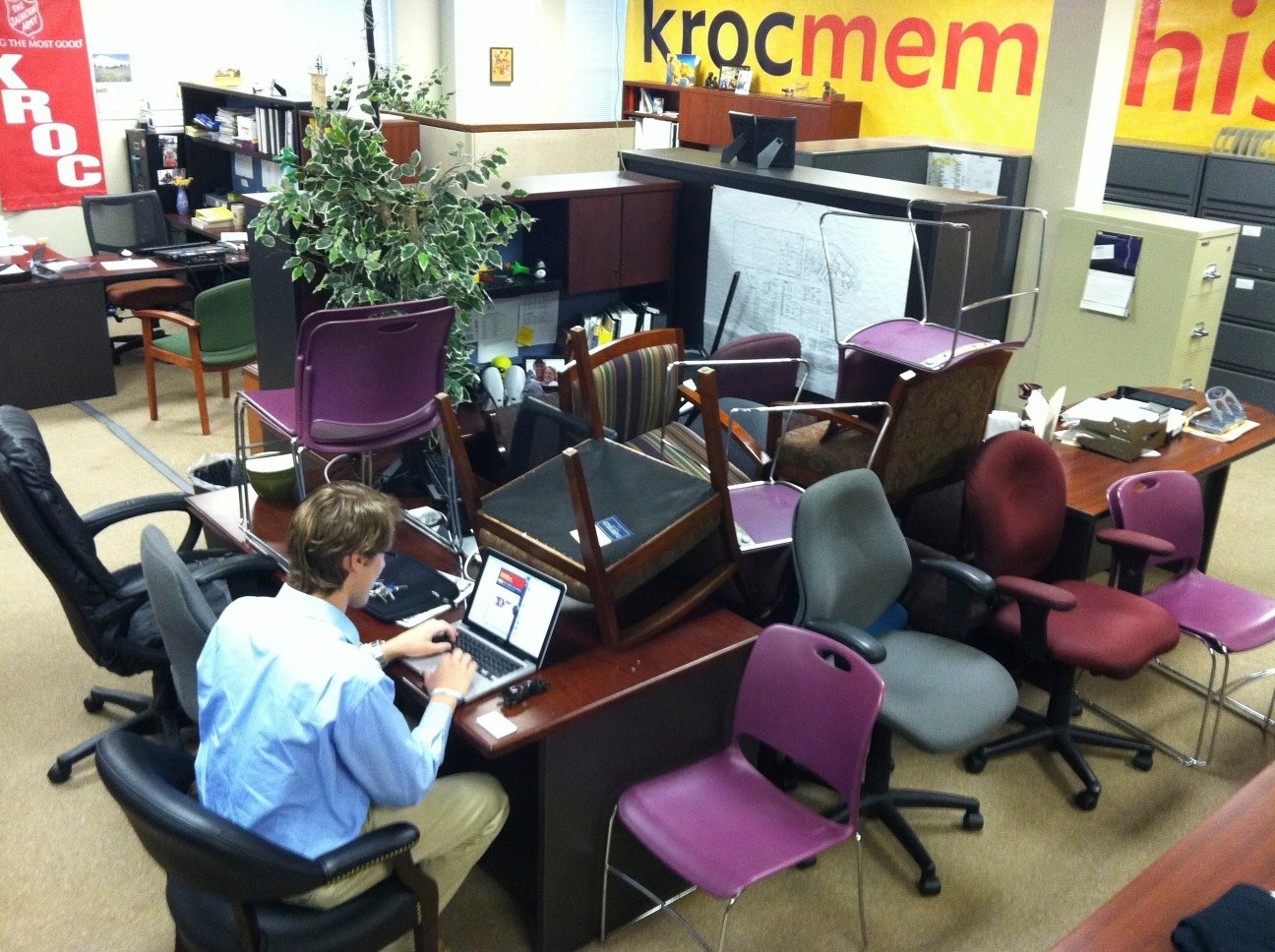 Construction continued, and we moved from AV to IT, working on the network layout, IT closets, VOIP system and more. With a background mostly tied to Apple products and services, it was a crash course in a lot of technology. I love learning, however, and with some help from some other IT guys in the area and some good vendors, the IT backbone of the Kroc Center began to take shape.

The building was taking shape, too. Areas were becoming more defined, and showing people the site involved less imagination on their part by the fall of 2011: 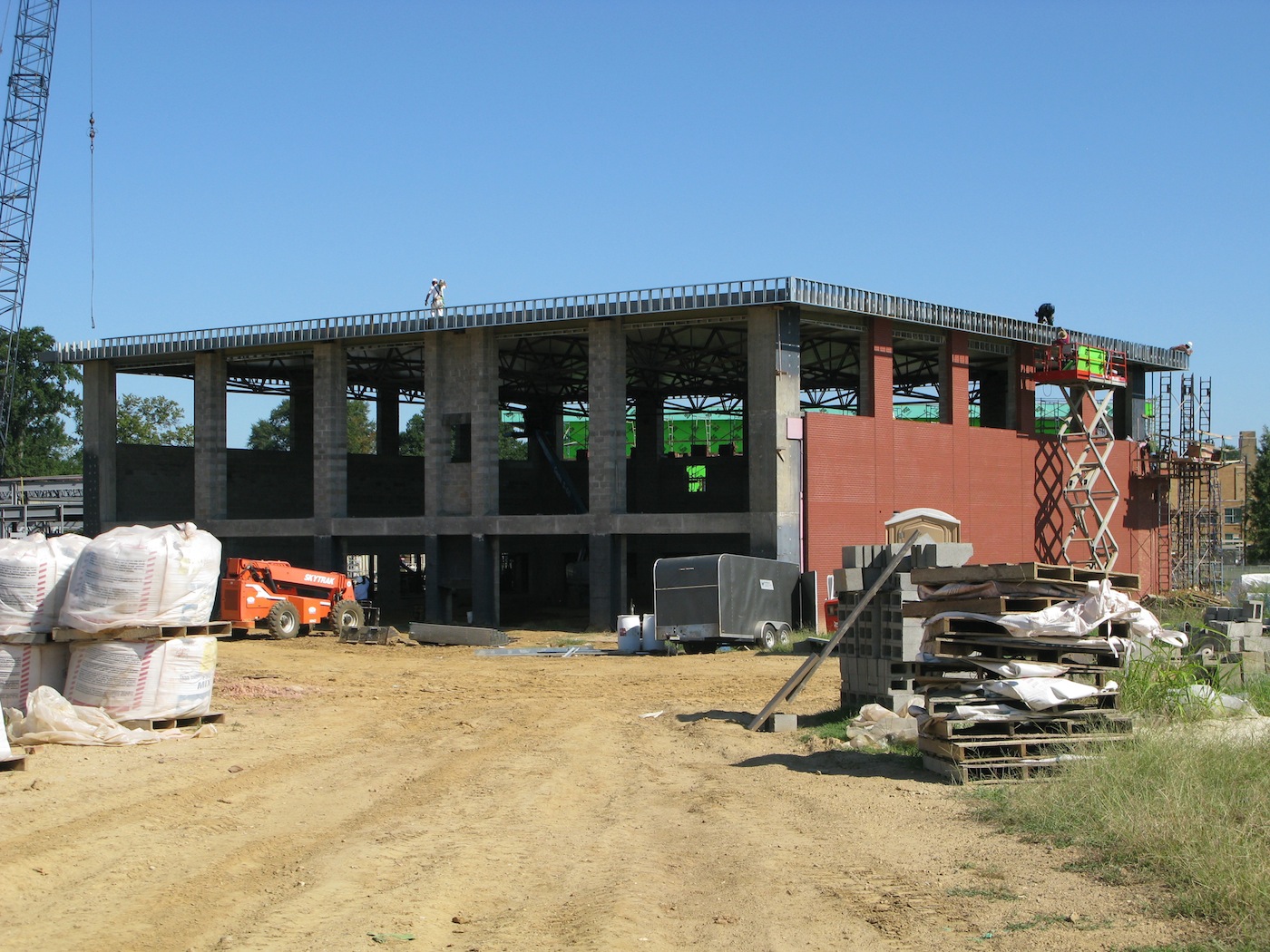 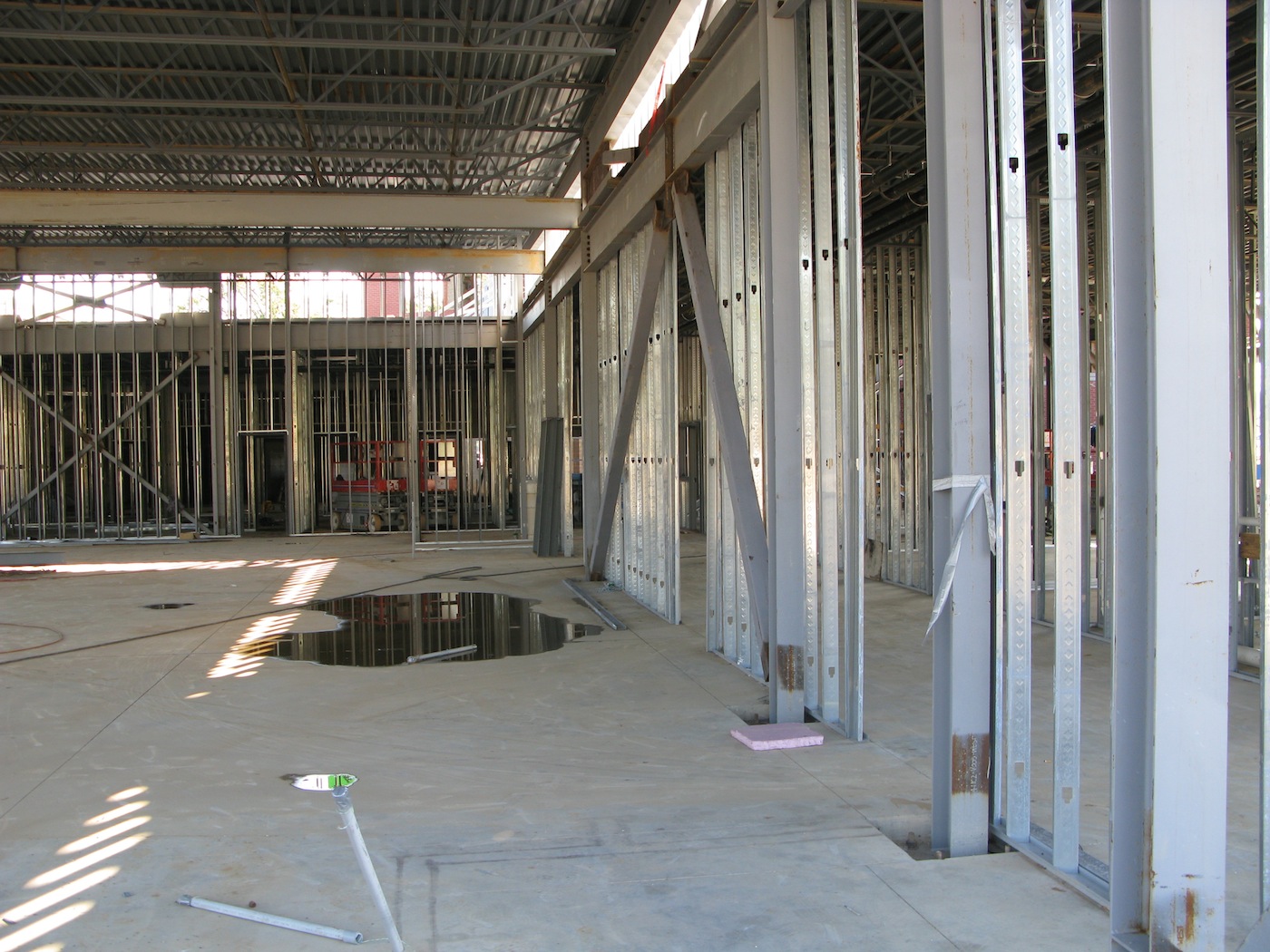 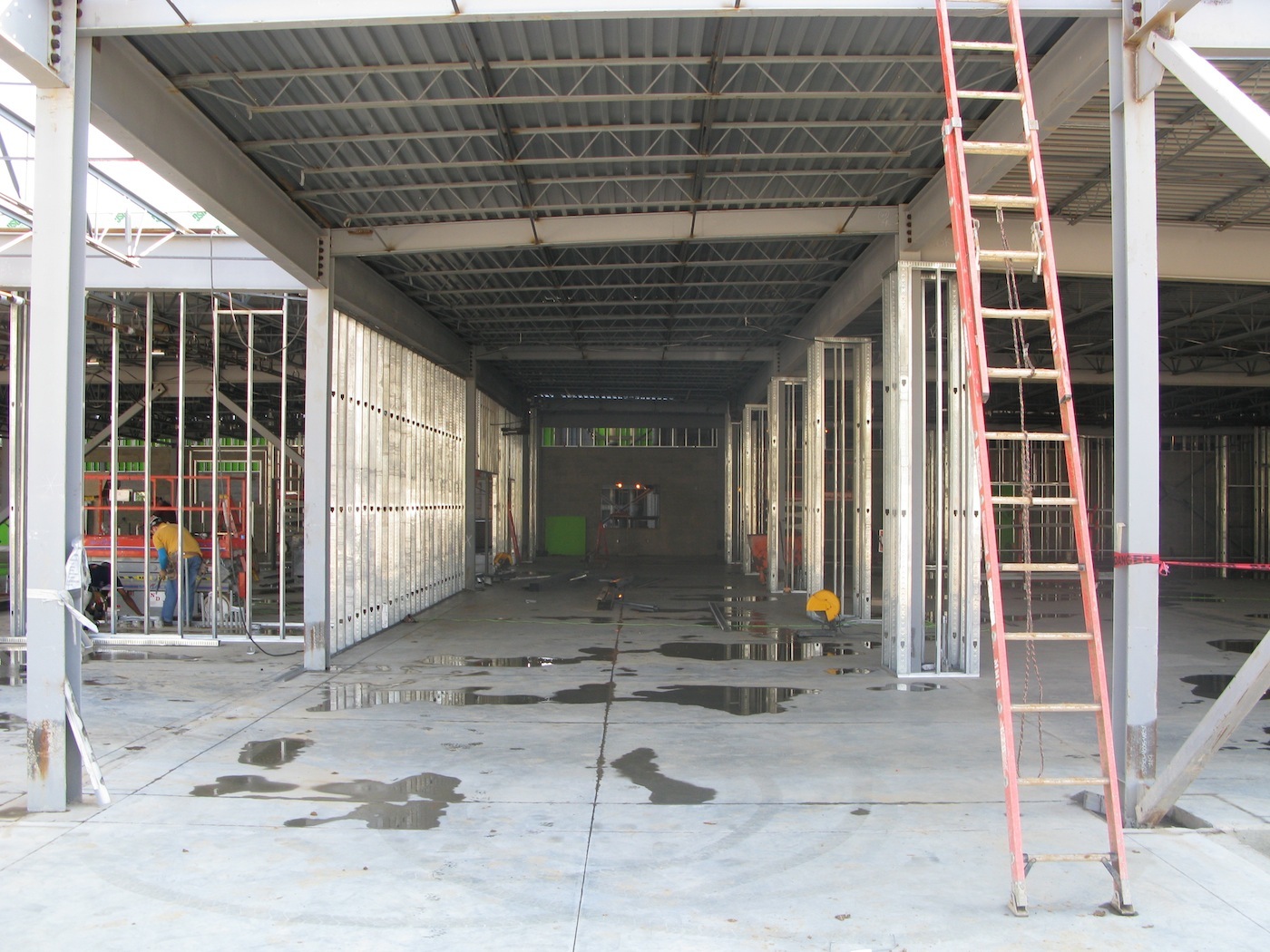 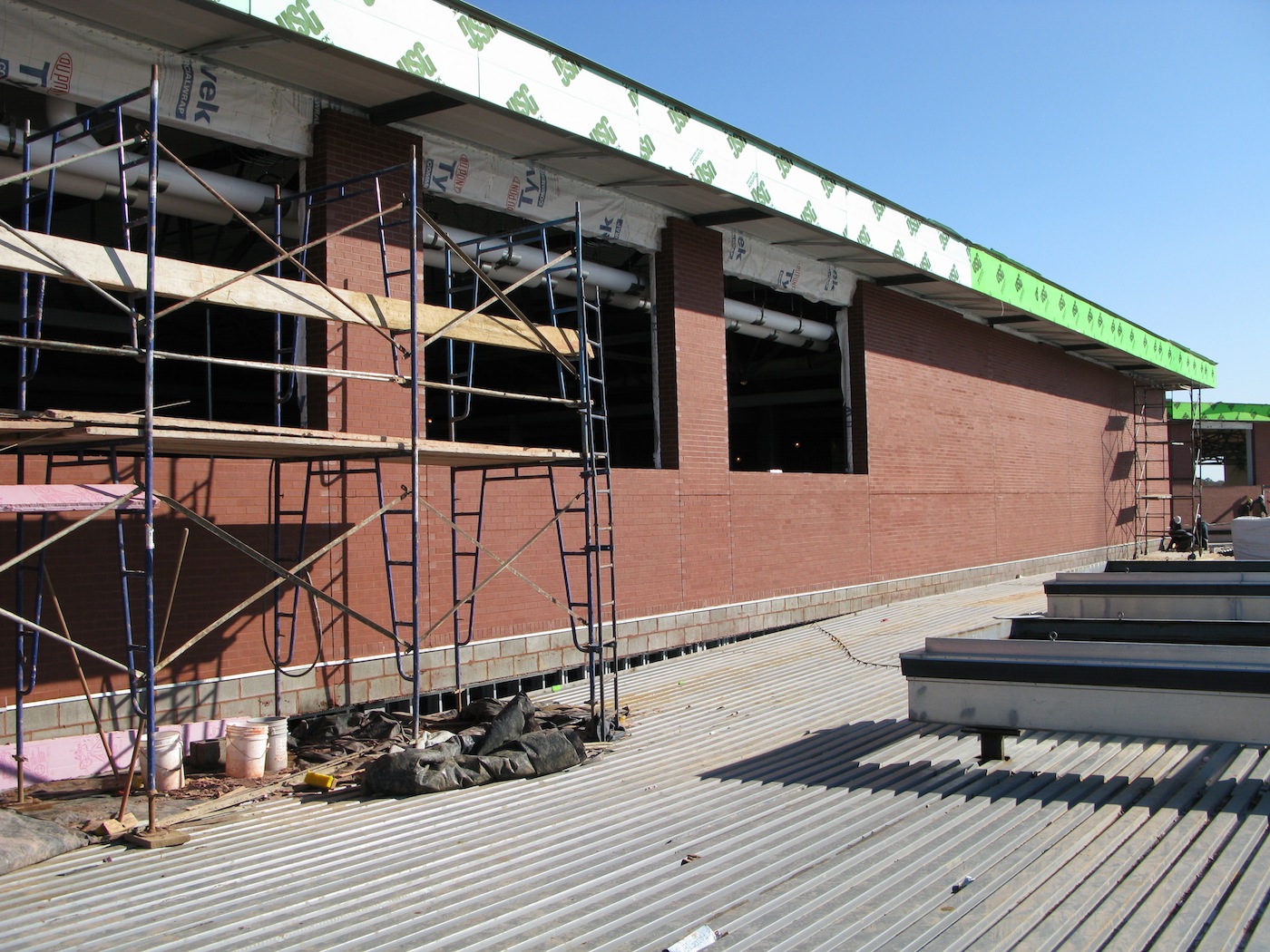 By this time, the first wire pulls for the network were being run in some sections of the building. As it is so large, the Kroc Center was built in four “zones,” with some being much further ahead then others.

Due to the size of the building, we ended up linking the main network closet and the remote closets with fiber. We used a mix of in-slab conduit and basket tray for the fiber and CAT–6 cables.

It surprised me that even in 2009 — when the Kroc Center plans were finalized — IT and security aren’t paid much attention to during the design phase of buildings. I had a few “server” rooms on the drawings, but the conduit isn’t how I would have designed it. The mechanical engineers didn’t have adequate cooling called for in the main network room, causing last-minute revisions.

On the non-IT front, the staff responsible for the fitness center, gym, Challenge center and more were coming on-board and starting to do work in the community. We held several camps in local schools and started working with our partners at their locations to do ministry.

The first half of 2012 brought much progress. The 300-seat Chapel and Performing Arts Center was taking shape. 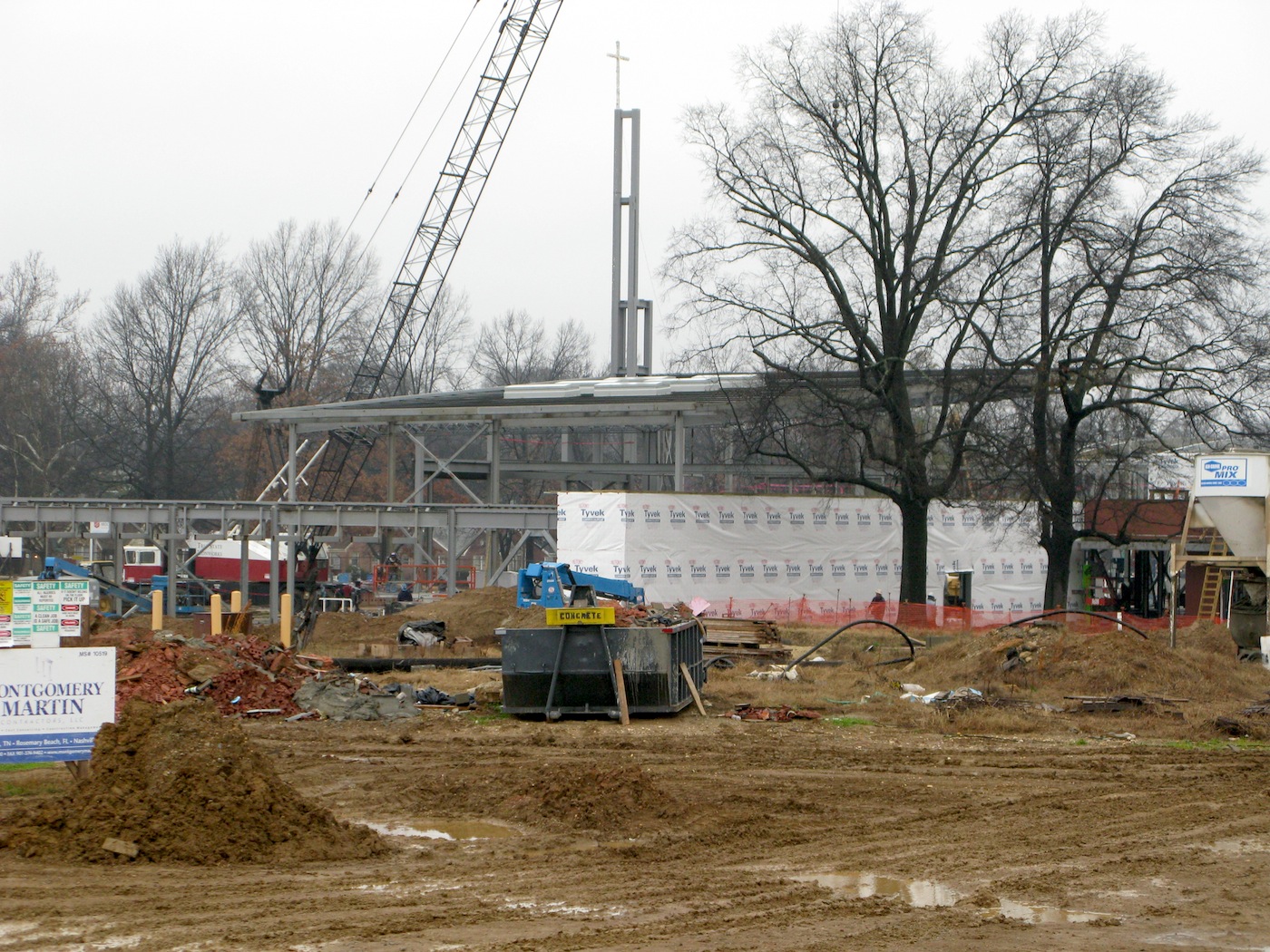 This space features a dizzying number of lights, a fully-digital sound system and a video projection system that rivals many movie theaters. Dollar-per-square-foot, it was my most expensive room, and in the four months since opening has already been home to countless events.

The pool began to take shape at the same time, although it would be one of the last indoor areas complete. 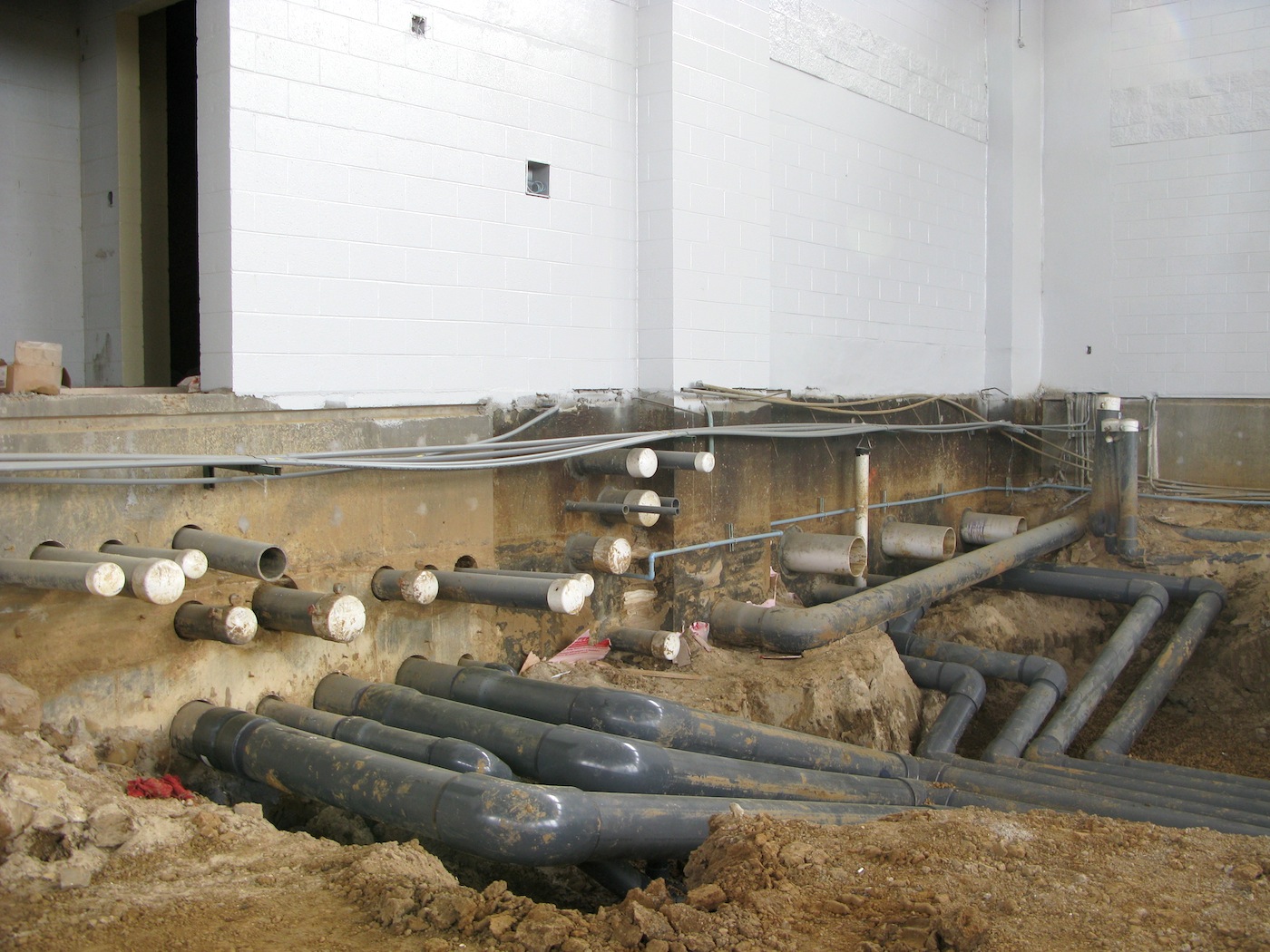 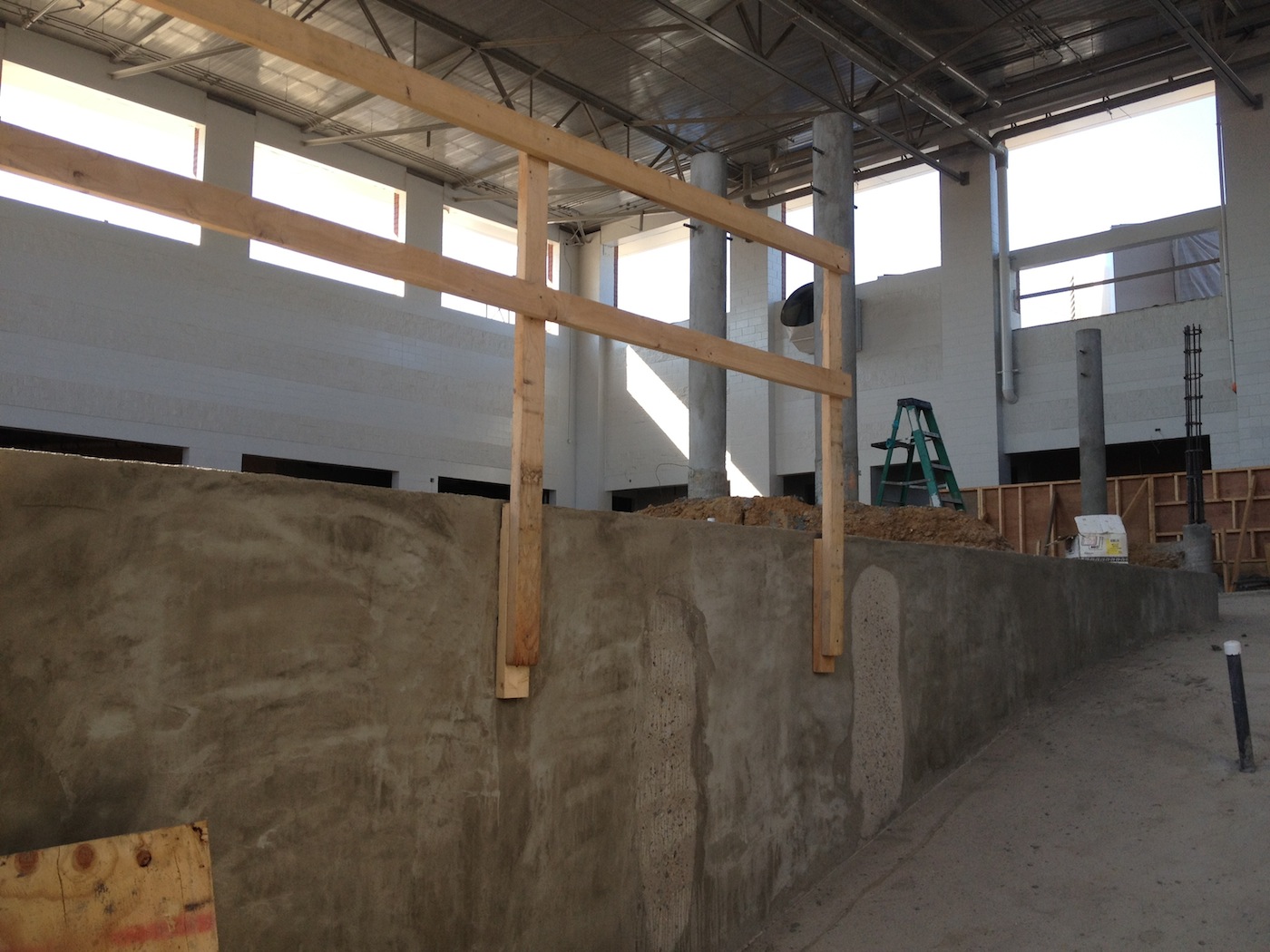 Data and security cable were being run all over the place, and for the most part went smoothly. By the fall of 2012, the structure was complete, and work really took off on the interior. Challenge’s themed rooms were assembled (having been built in Florida), the gym floor went down and chairs went in the Chapel. 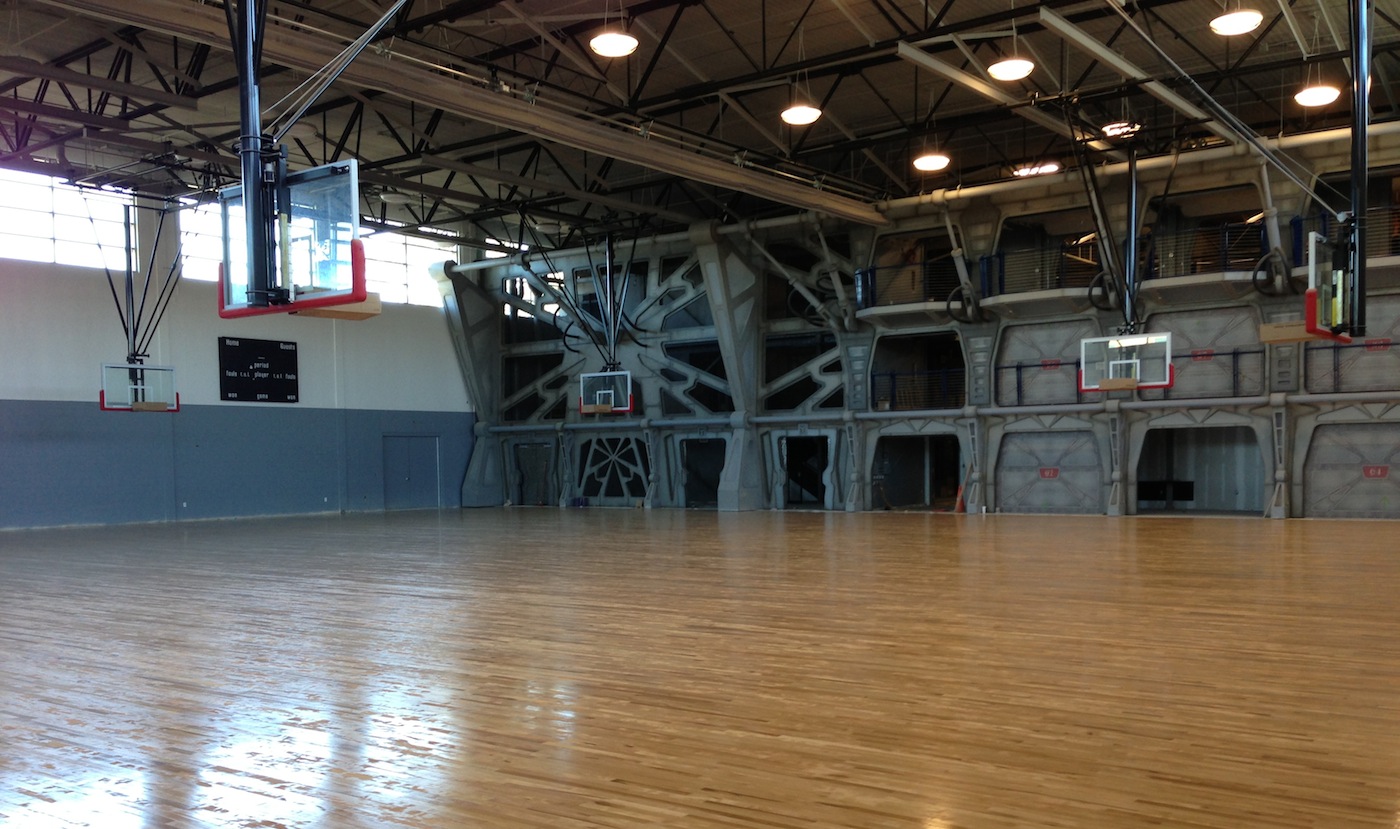 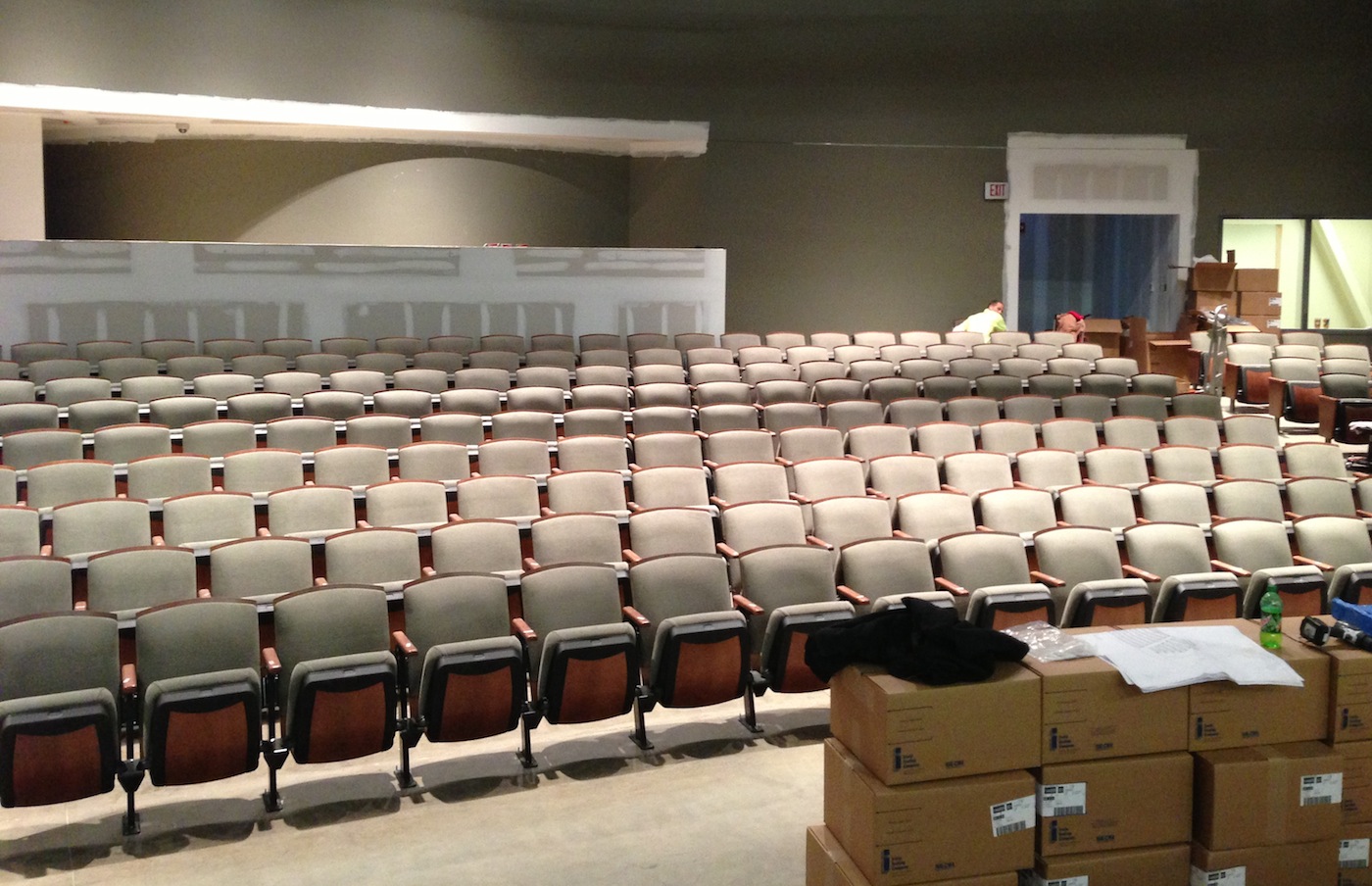 As 2012 came to an end, my staff and I went to work installing servers, AV gear and more. We had some really great local vendors, but a lot of the work rested on our shoulders.

As crews painted walls, stained the concrete floors and rolled in fitness equipment, we were there with them, loading in and setting up battery backups, the core switch and servers. Earlier in 2012, the Kroc staff had out-grown our office space downtown, and had moved down the street from the job site, which proved to be very helpful for those of us splitting out time between sites. 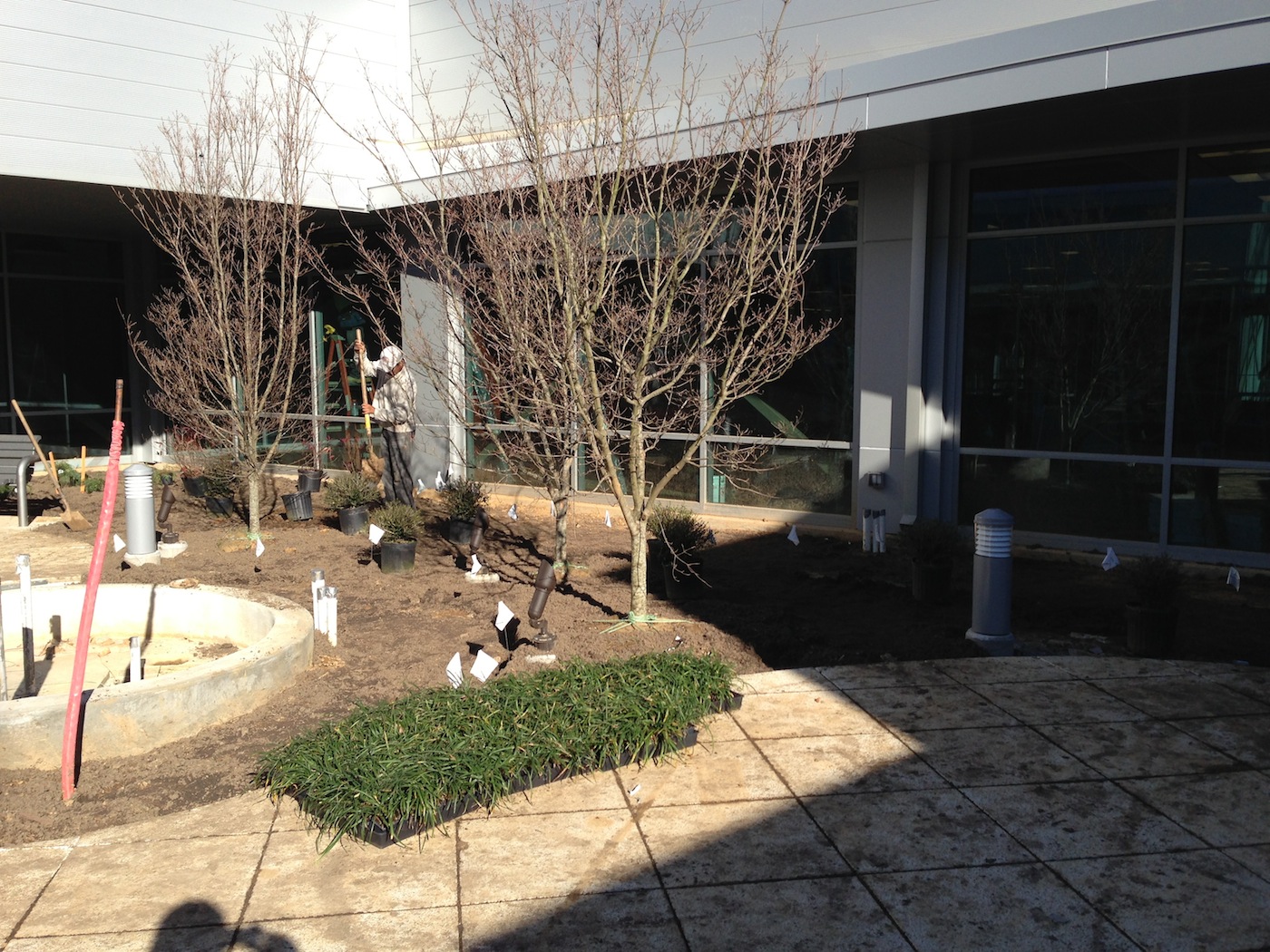 The Kroc Center doesn’t operate completely independently, of course. The IT department at our headquarters mostly stayed out of our way, which was great. Memphis has the best IT group of any Southern Kroc Center, and it really showed during the install period.

Even as construction continued around us, thankfully — amazingly — the plans we had put in place worked for the most part. The network and phones came online without any major issues, and we didn’t have any major server issues, on the Windows or OS X boxes.

After getting the backbone up and running, we setup check-in desks and concessions stands with point-of-sale systems, brought up the wireless, ran Ethernet through desks and cubicle partitions and (on rare occasion) slept. It was balls-to-the-wall crazy for a couple of months making sure the building and its systems would work for the Grand Opening at the end of February.

The Opening weekend was comprised of a dinner for donors, followed by two days of public events, tours, worship services and a dedication: 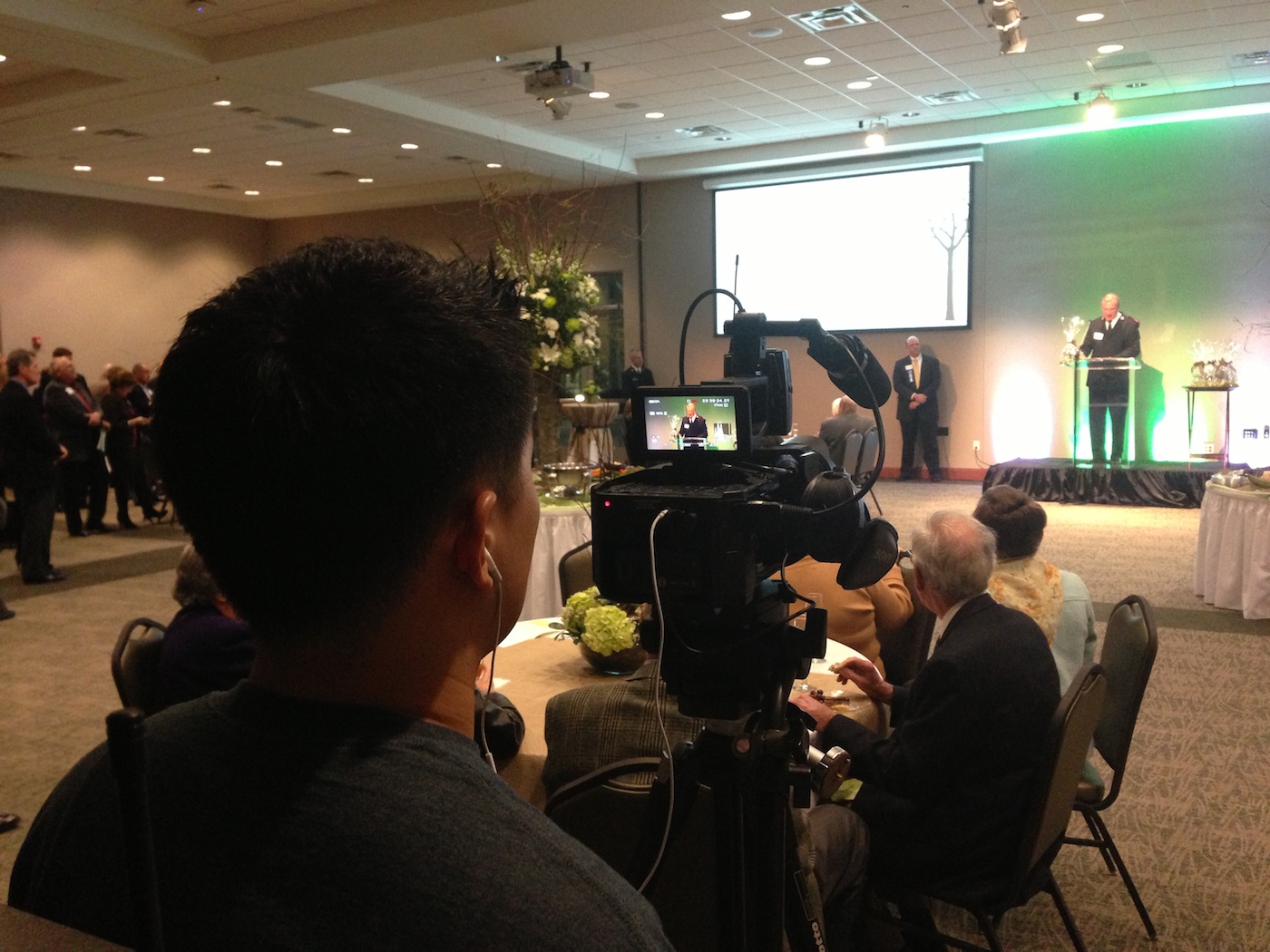 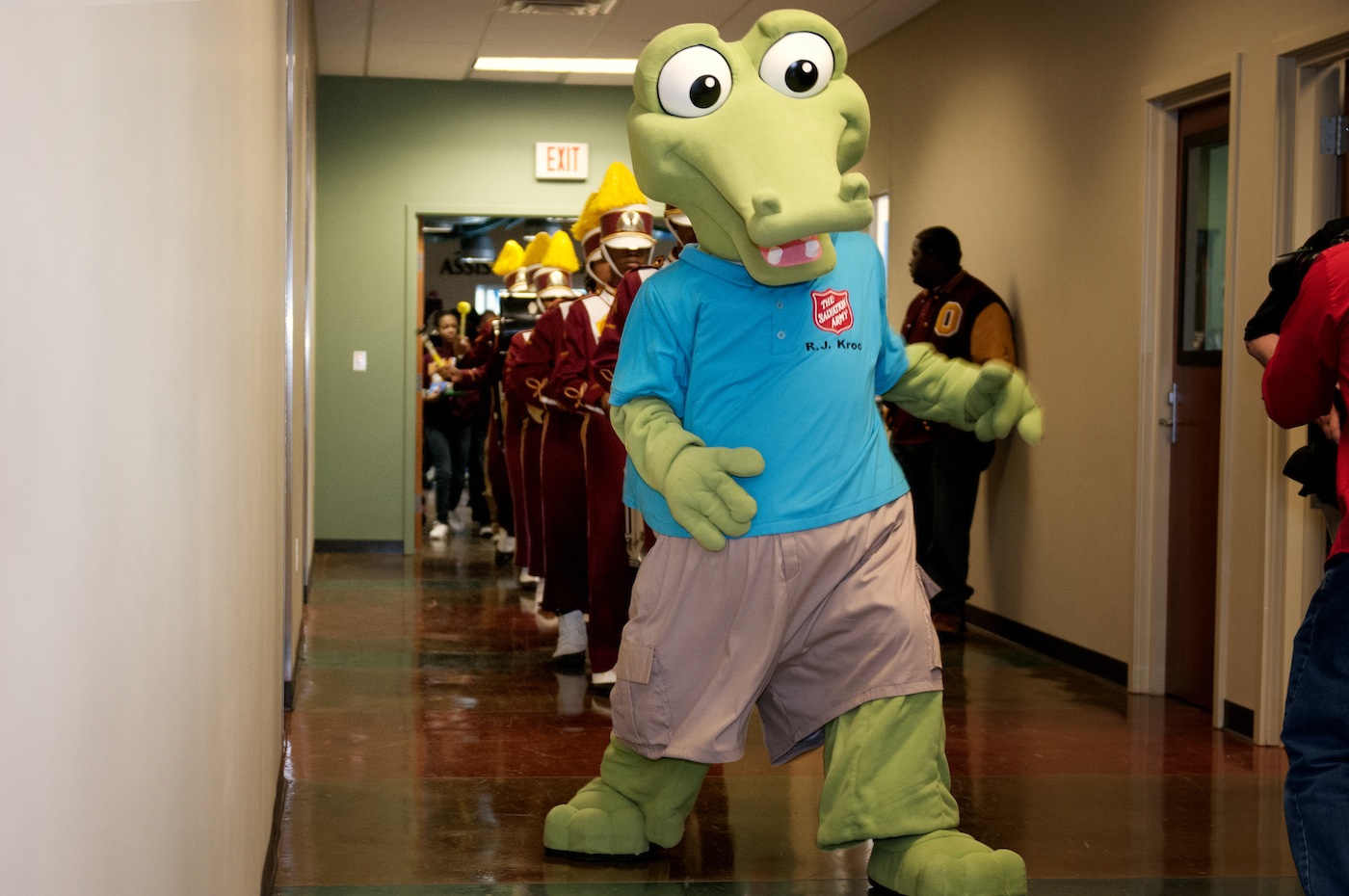 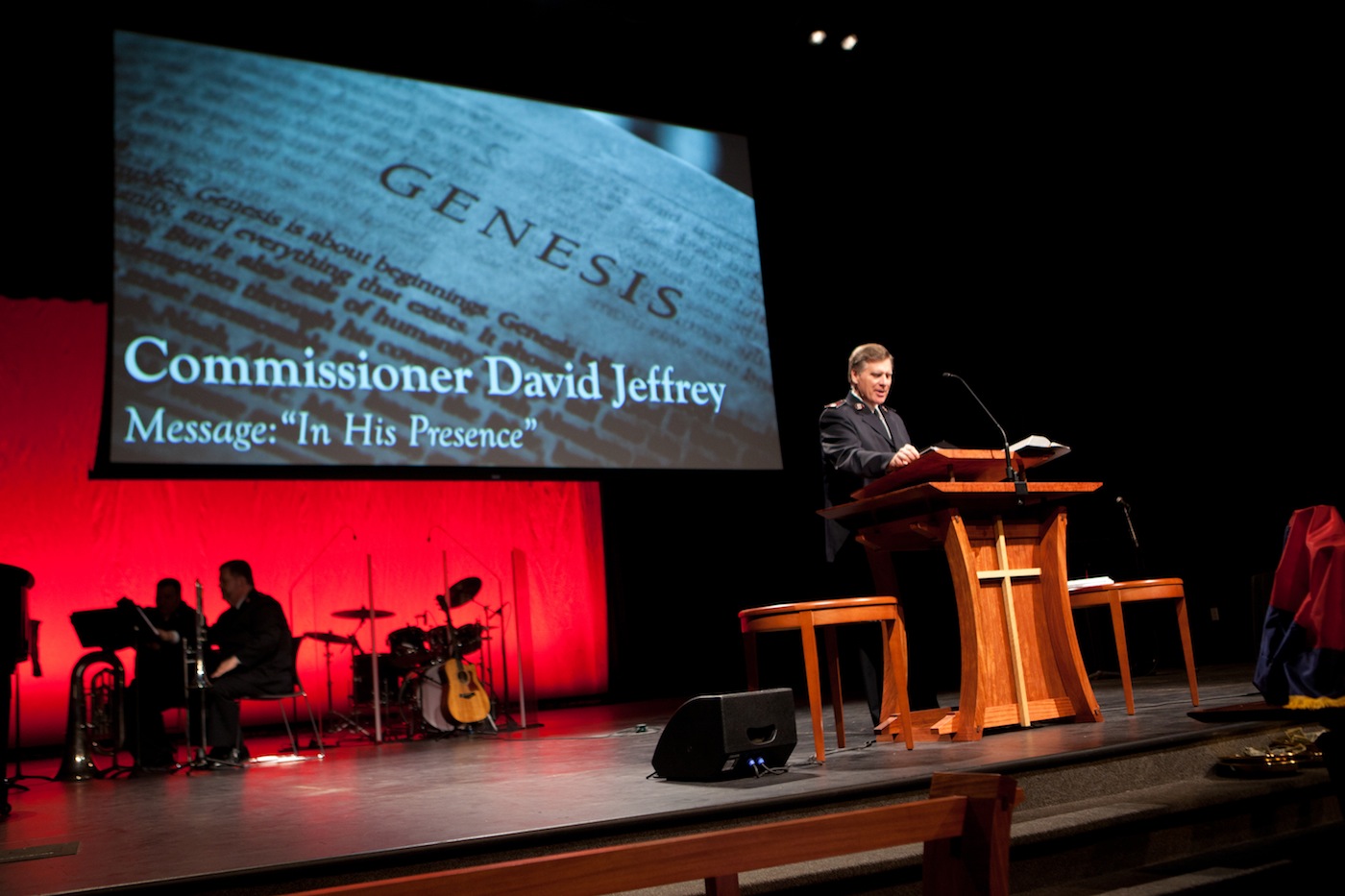 There was even (cold) water in the pool, and my kids met RJ, our mascot: 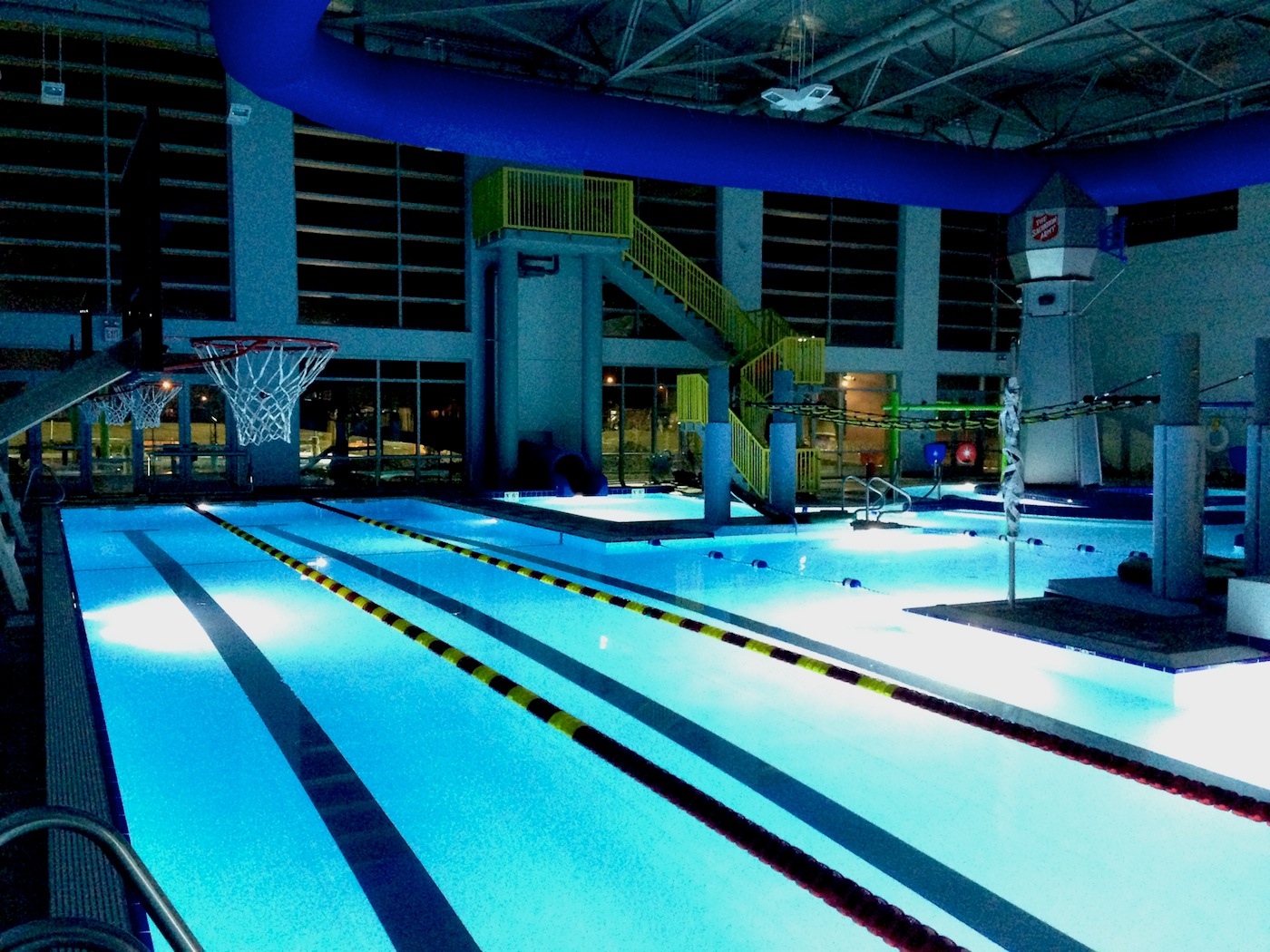 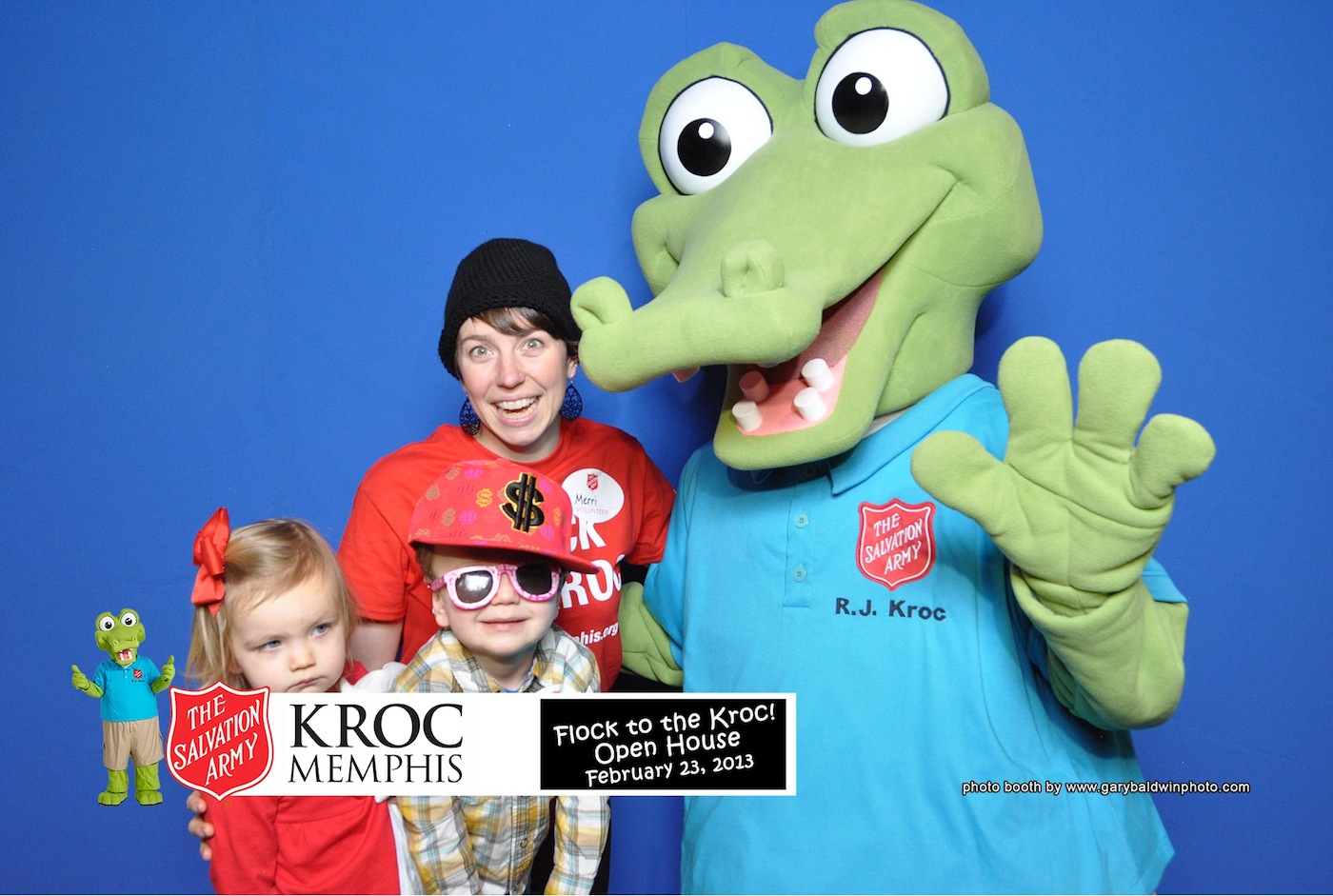 We didn’t have everything working by that first weekend, but everything we needed to be operational was up and running. It was backbreaking, but rewarding like no other work I’ve ever done. My team really was awesome, and we all learned a ton of stuff as we went about servers, networking, AV and more.

The Kroc Center has roughly 40 full-time employees, with at least twice that working part-time now that it is summer. I was honored to be the fourth staff member, and looking through my thousands of photos for this piece, teared up more than once thinking about what we pulled off getting the thing open.

I’ve never worked so hard in my life, or with a more broad scope of technology. 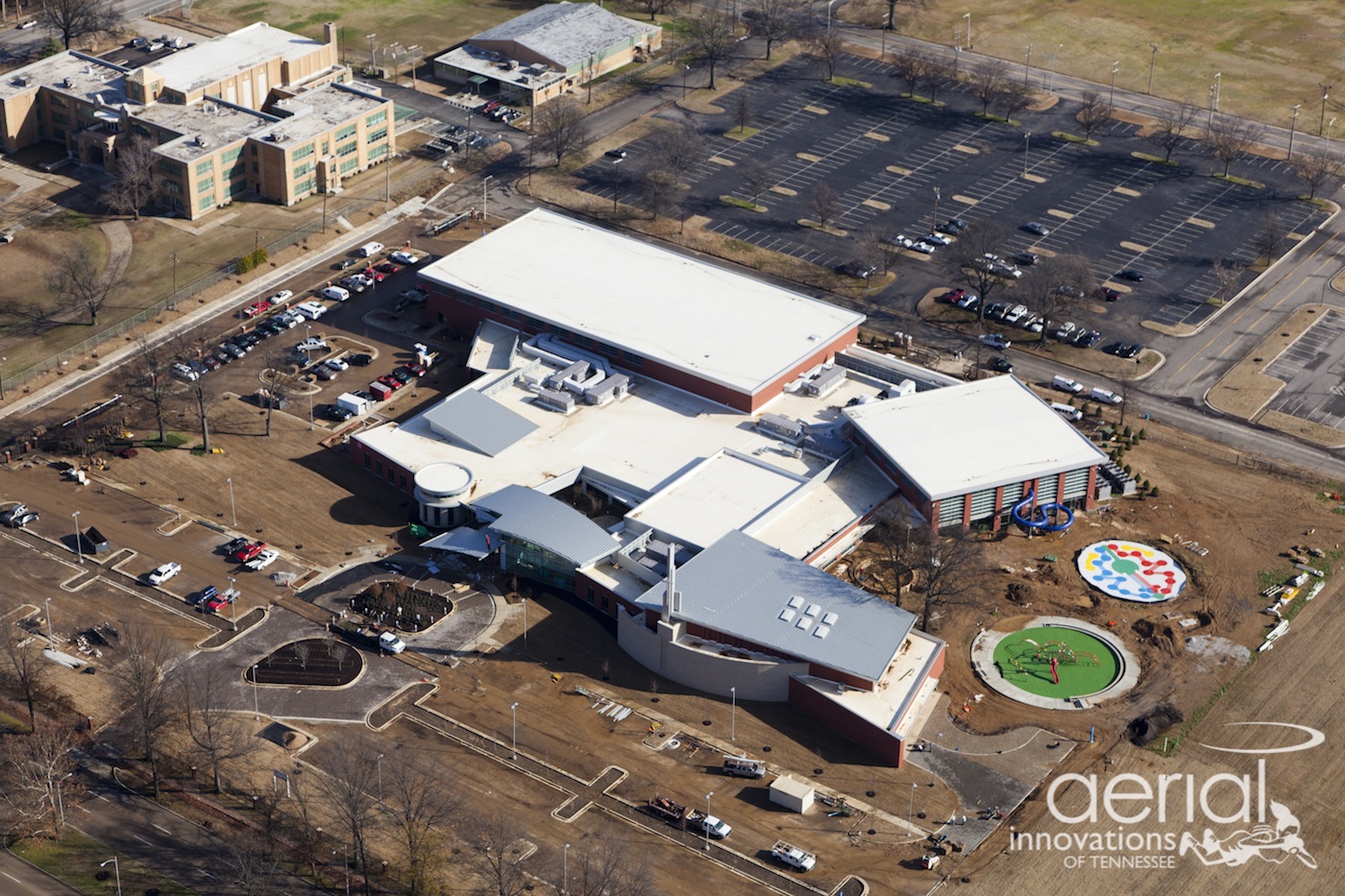 The Kroc Center has a long, bright future ahead of it. While I’m pained that I won’t be a direct part of it, I’m excited about my new gig, and am leaving on good terms. 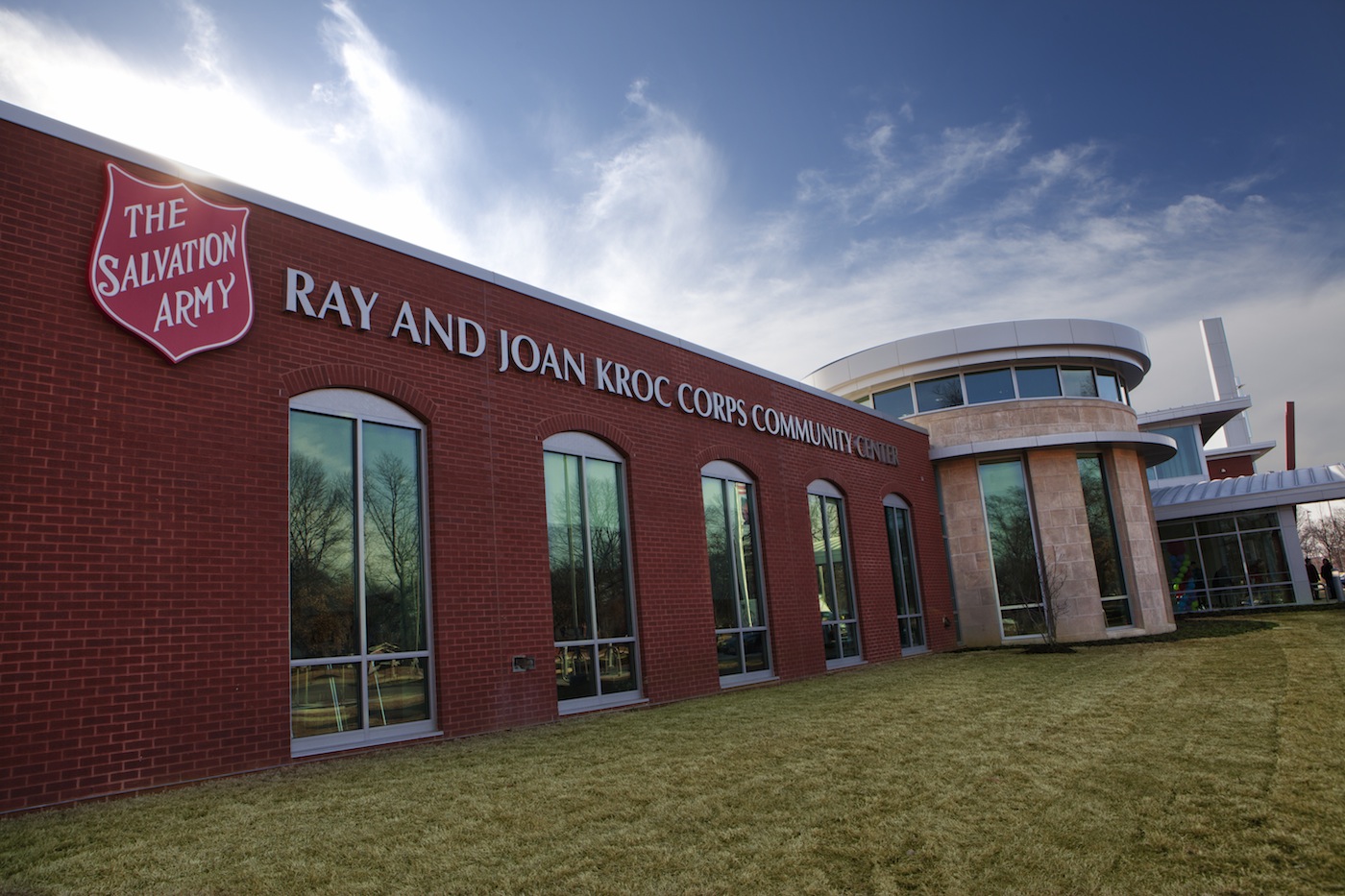 Sometimes, it’s just time to move on, no matter how good things are.