The first notebook I used full-time was a 1GHz Titanium PowerBook G4, and while I used a bunch of iMac G3s and beige Power Mac G3 in high school, my part-time job at the time came with what I consider to be “my” first Mac — a Blue & White Power Mac G3. 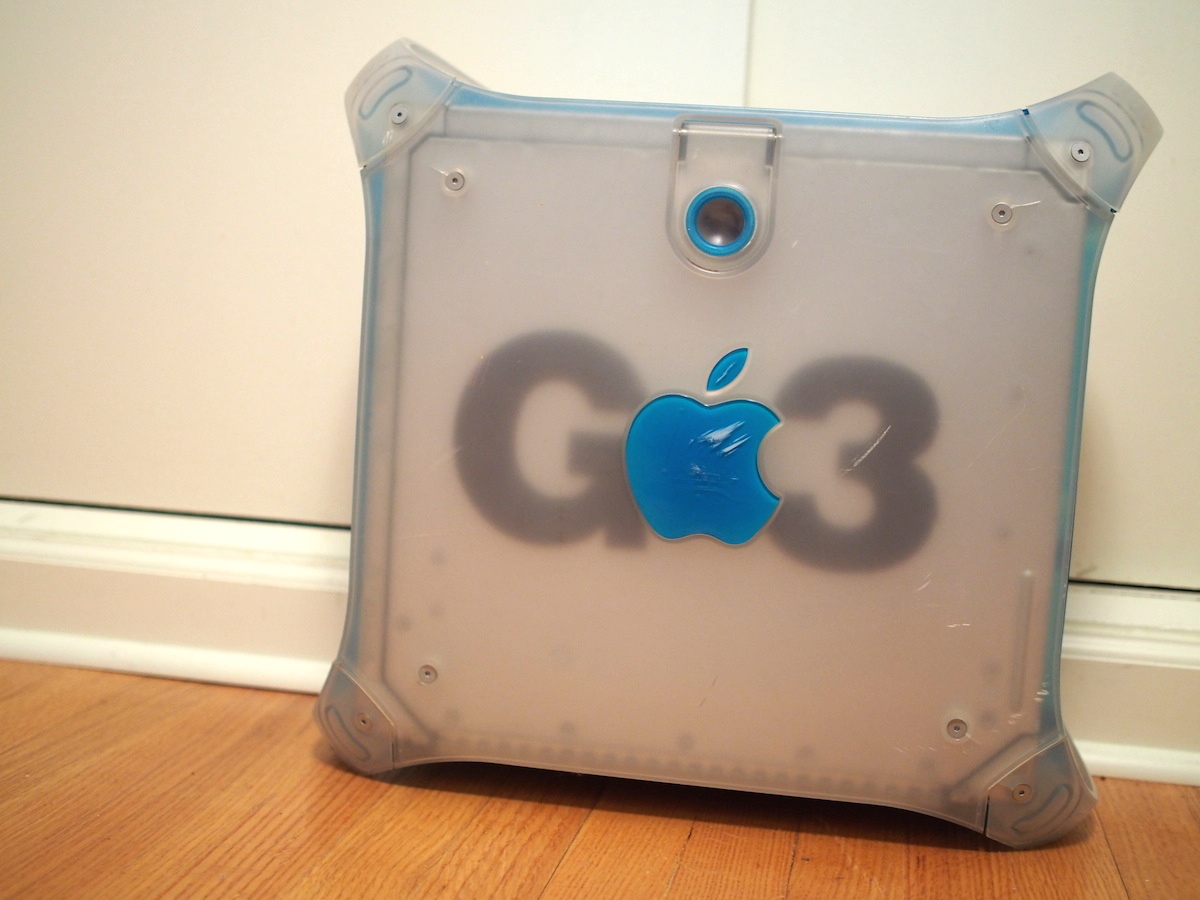 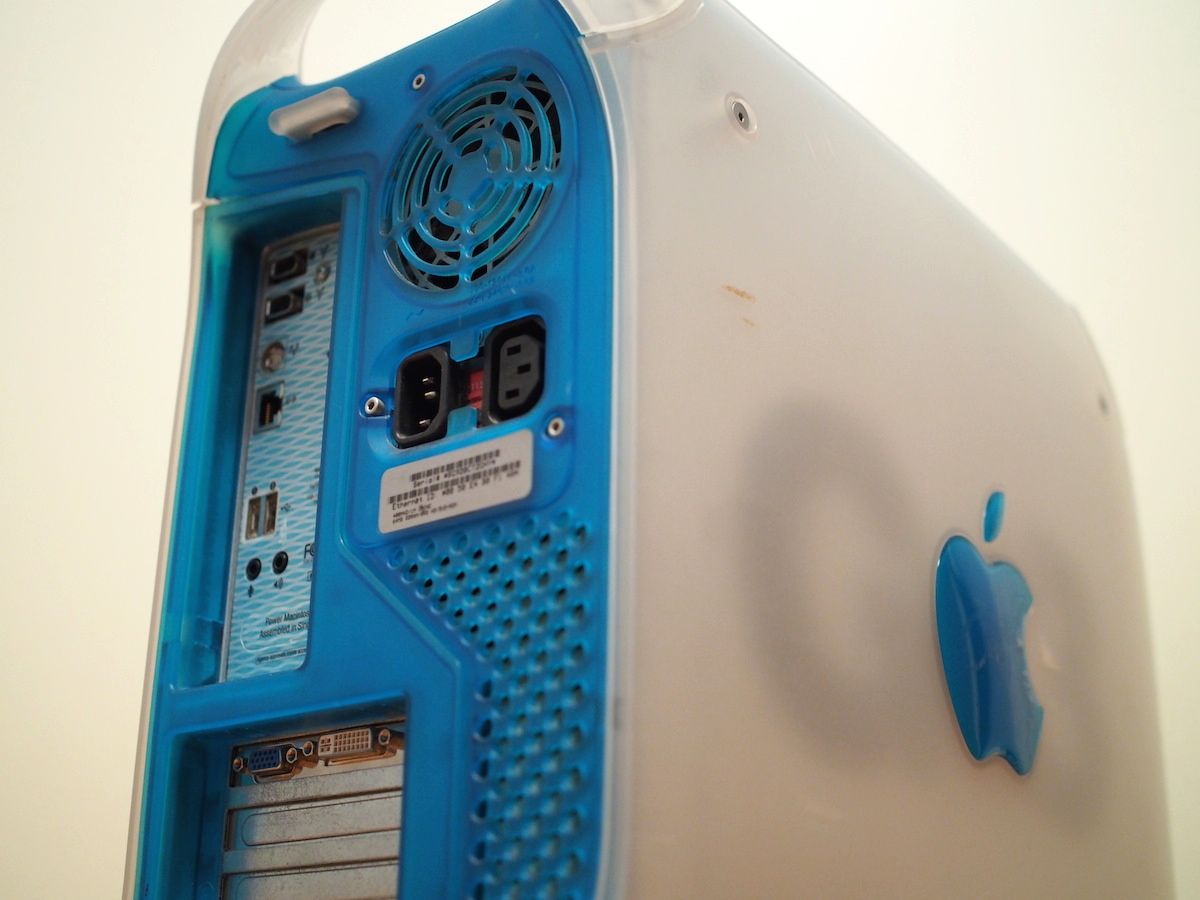 (That’s my exact machine. I just got it back through an extensive set of trades on the Memphis gray market for old Macs.)

The Blue and White is an interesting machine, beyond my attachment to it.

Introduced in January 1999 at Macworld, the “Power Mac G3 (Blue and White)” took the design of the iMac and brought it to the professional desktop world.

Of course, 1999 was a weird time for the company. OS 8 was out, and the cat was out of the bag about OS X, but Aqua was still a year away.

Things, however, were looking up. Apple has sold 1.6 million of the out-going beige machine. The new machines, however were designed to be faster, more expandable and better designed.

The processors in the Blue and White were fast (and copper!), the machine had lots of expansion bays, but the inclusion of an ATI Rage 128 video cards and FireWire set the machine apart.

Lastly, the Blue and White was the first Mac to ship with FireWire, leaving behind SCSI forever.

More so than the iMac G3, the Blue and White is a transition model. It was the debut machine for FireWire, and brought USB to Apple’s professional lineup. To the chagrin of pro users, however, the company dropped the serial ports, floppy drive and SCSI support found on the out-going machine. This computer also holds the distinction to be the only Mac to ship with both ADB and FireWire.

Most importantly, it was the first Power Mac to ship with the New World ROM.

Inside, the Blue and Whites were packed full of fairly standard parts. Drives connected over IDE, the RAM came in generic modules, and the processor sat on a ZIF socket. With 4 PCI slots, the Blue and White could easily be customized for video and audio work, connecting serial-powered devices and more. The “Gossamer” logic board was based on the beige G3 before it.

Revision A machines, however, had some issues. Here’s a section from the machine’s Wikipedia page:

Early blue and white G3s (“Revision 1” units) had IDE controller problems related to the ATA/33 hard drive controller that made it impossible to connect two hard drives and prevented the use of newer drives. Using newer ATA drives in those units resulted in data transmission errors if the drives were connected to the on-board ATA/33 controller, the severity of the problem varying according to the particular make and model of the drive. Workarounds include replacing motherboards and employing the use of SCSI, Ultra ATA or SATA PCI controller cards. Stable operation can be achieved if the drive can be limited to Multi-Word DMA Mode 2 (disabling UDMA), although this limits throughput to 16 MB/sec. Some hard drives support disabling UDMA in firmware through manufacturer-supplied utilities (generally DOS-based). Alternatively, the transfer mode can be limited to Multi-Word DMA Mode 2 through the use of third-party driver software such as FWB Hard Disk Toolkit.

In late April 1999, the line was speed-bumped by 50 MHz, bringing the high-end model to 450 MHz. These “Revision B” machines shipped with a revised logic board and didn’t experience the nasty IDE controller issues.

The 350, 400 and 450 MHz models from the Rev. B series shipped with the same logic board — dubbed “Yikes” that would end up in the first Power Mac G4 machines.

The Blue and White was a huge upgrade in terms of looks. Just look at the previous G3 tower: 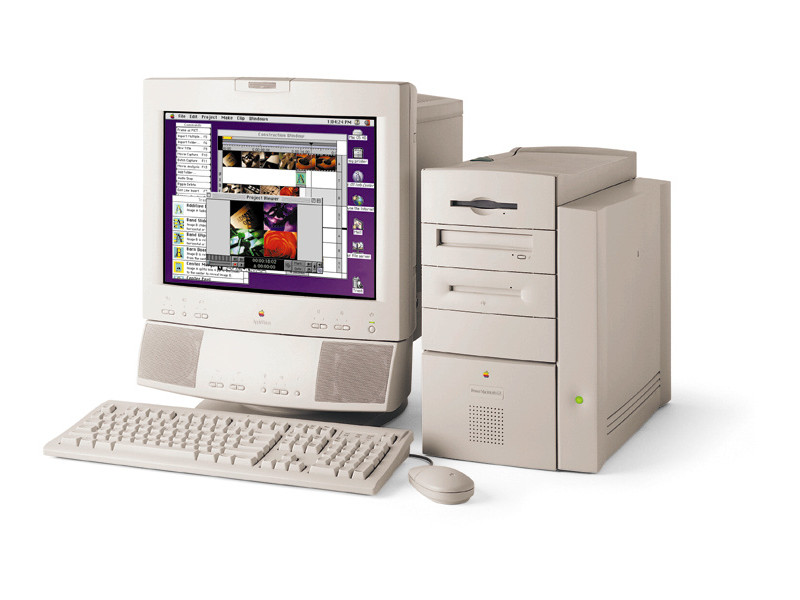 The new case was codenamed El Capitan. Its feet and handles were easy to grip, making moving the G3 easier than ever. The front, back and top were bold, showing off the Bondi Blue plastic in a much brighter way than the iMac, and the translucent side panels were enough to make any beige box look dingy. 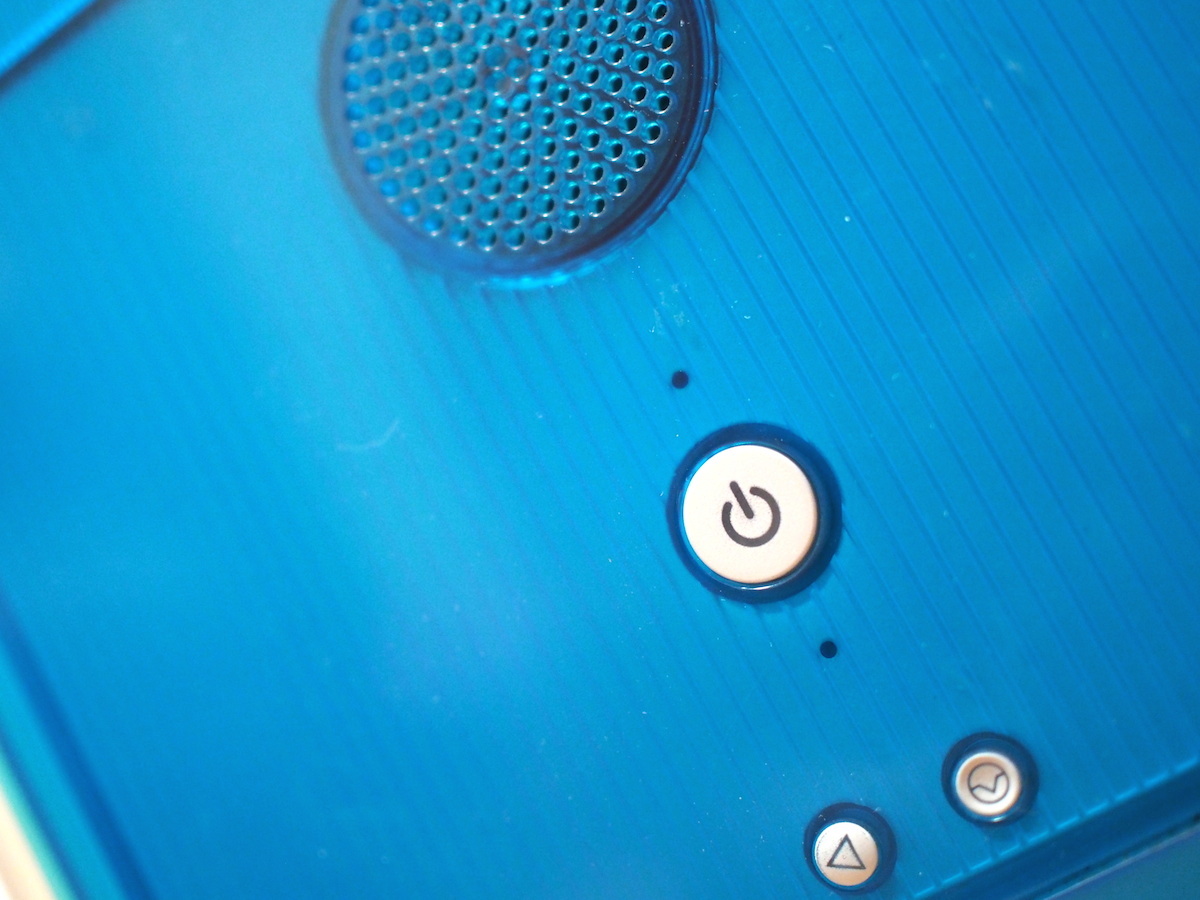 All of the internals were easy to get to, thanks to the handle and drop-down side: 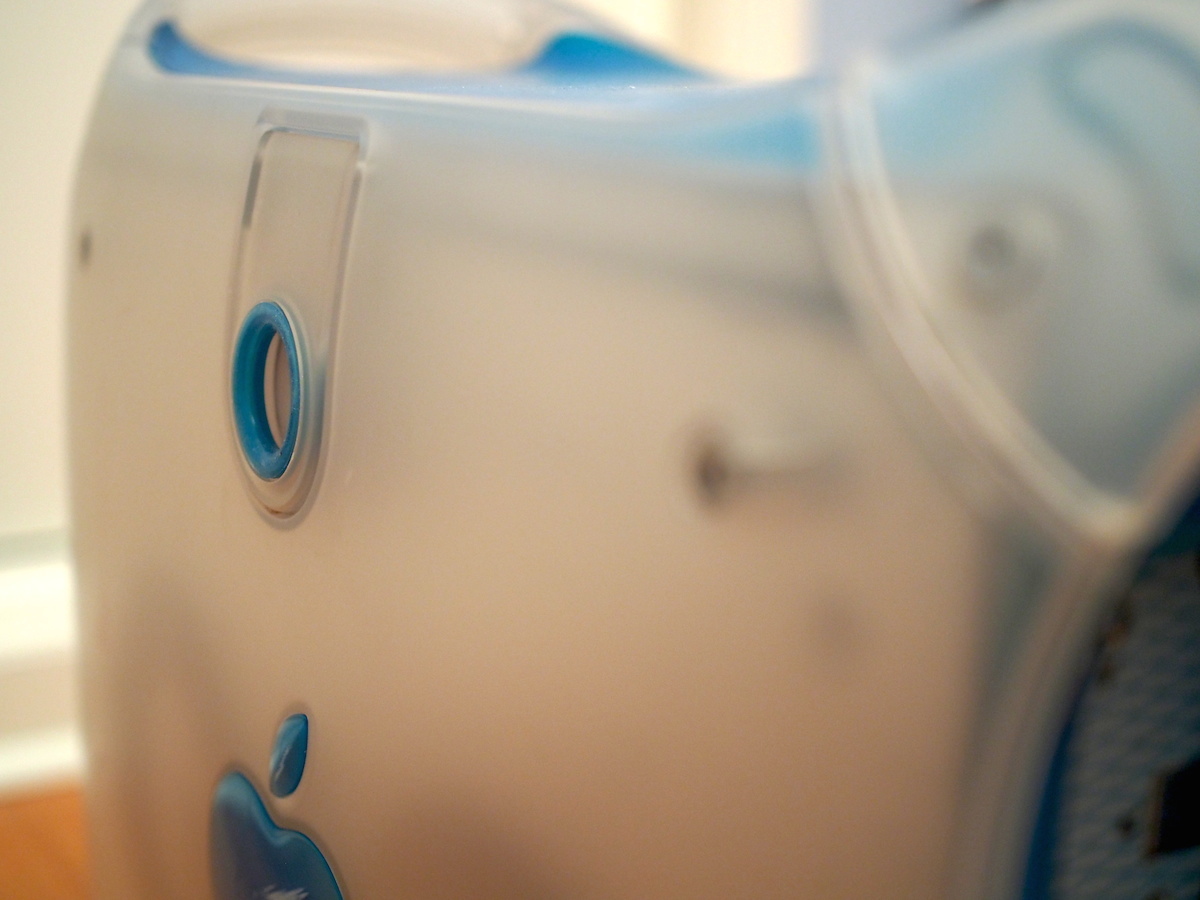 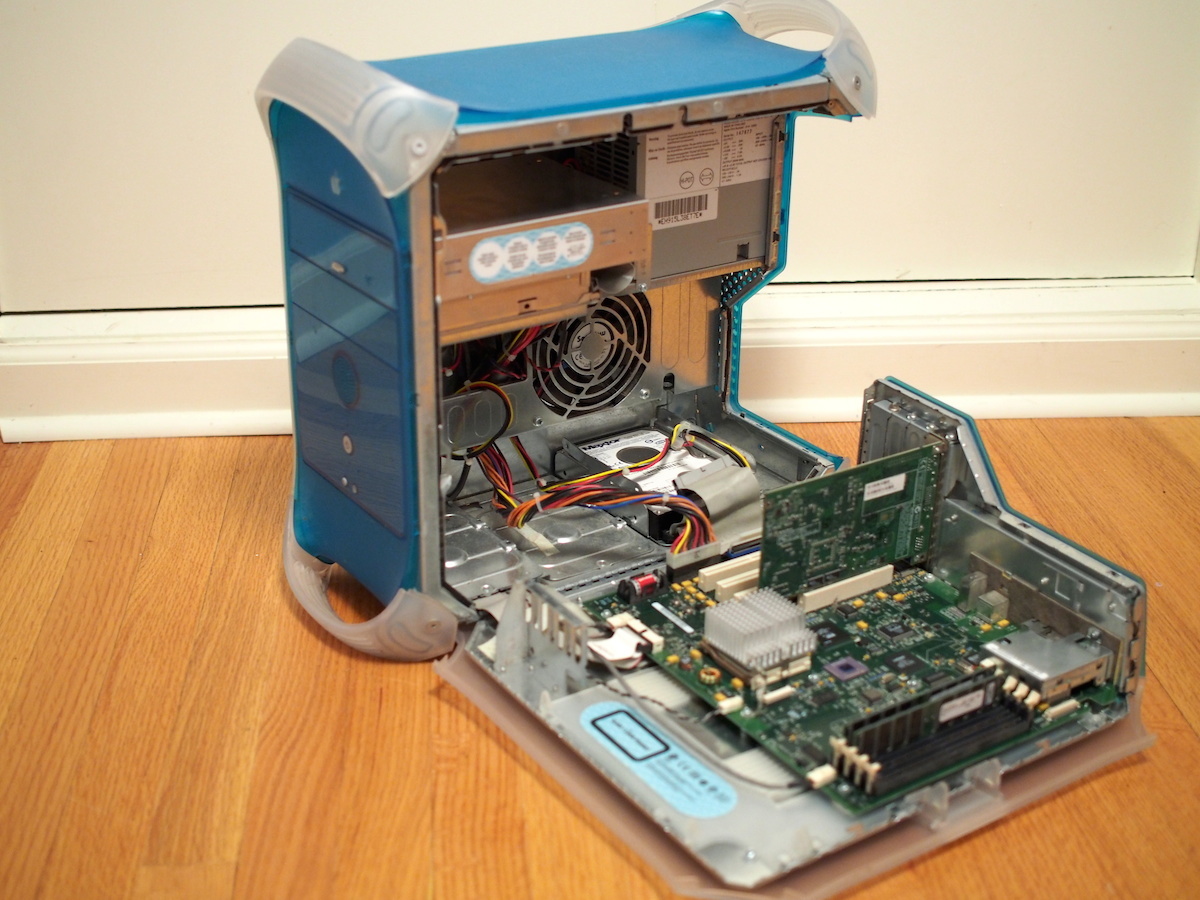 Here’s Steve Jobs showing off the case for the first time. Don’t miss the “Design is how it works” line.

The opening door was a revolution, and Apple liked showing it off. Compared to the closed and heavily customized Macs of today, the Blue and White seems almost foreign. 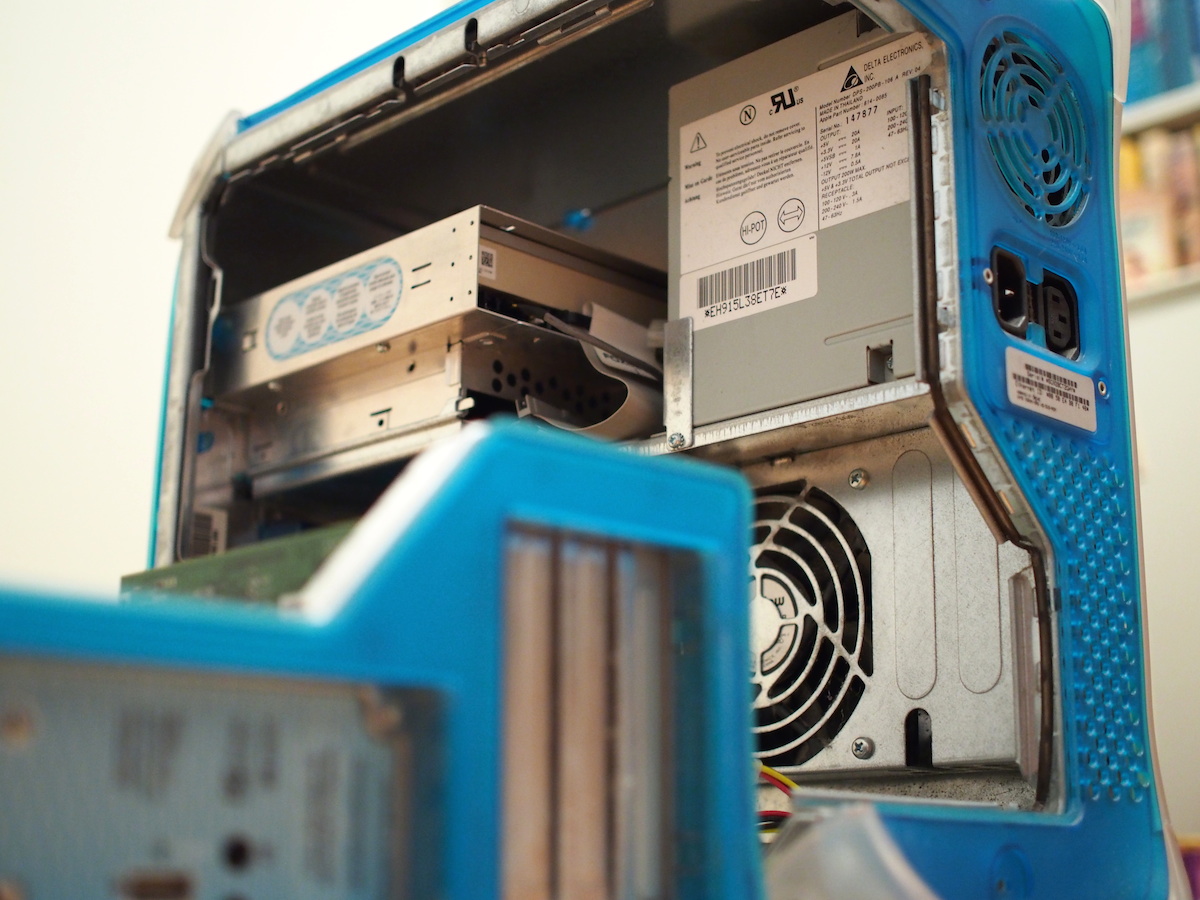 The Blue and White isn’t the first Mac that was easy to open, but compared something like the Power Macintosh G3 (Desktop) that preceded it, it’s elegant: 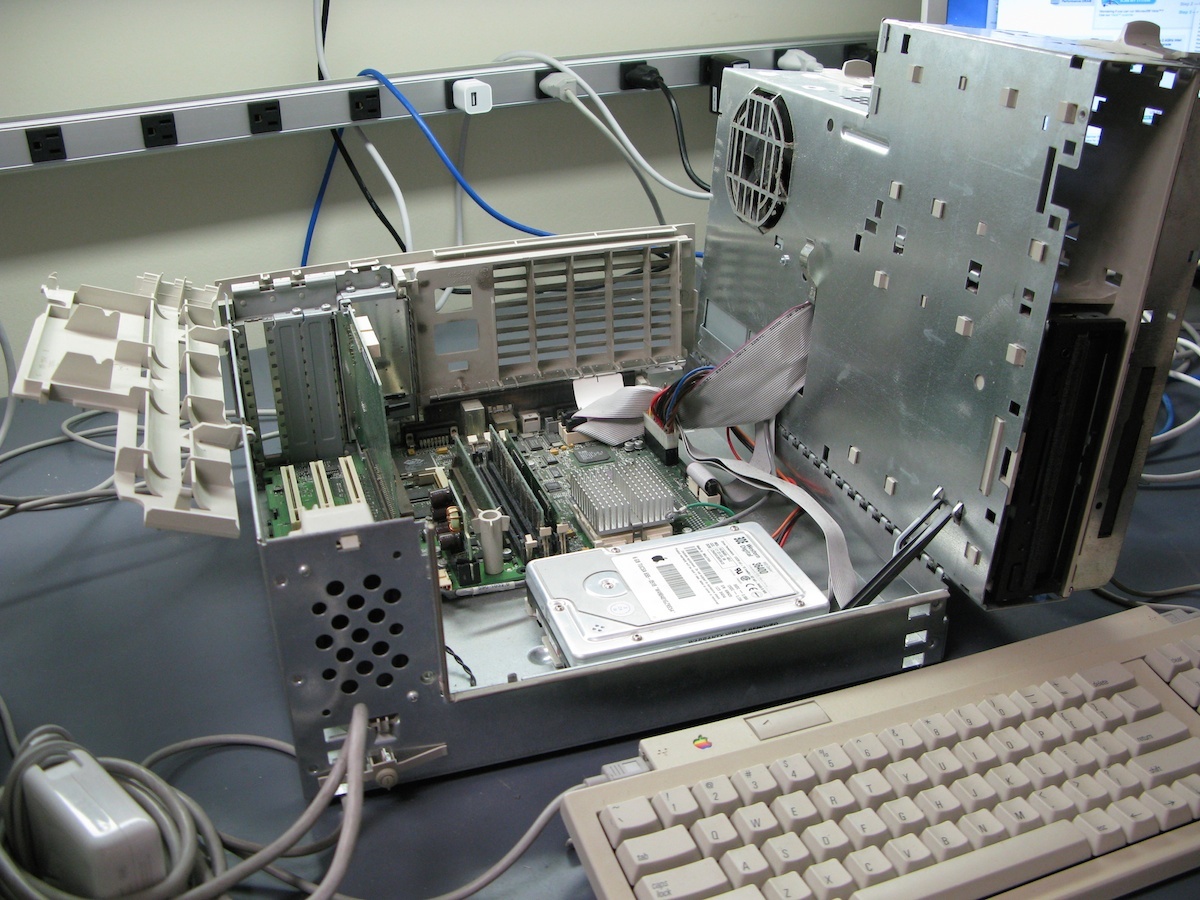 Beyond the functionality, the Blue and White was downright beautiful.

Sometimes, a machine comes along that sets the tone for years to come. Until the 2013 Mac Pro, the G3’s bones remained in place. Just check out the 2002-2004 “Mirror Drive Door” Power Mac G4: 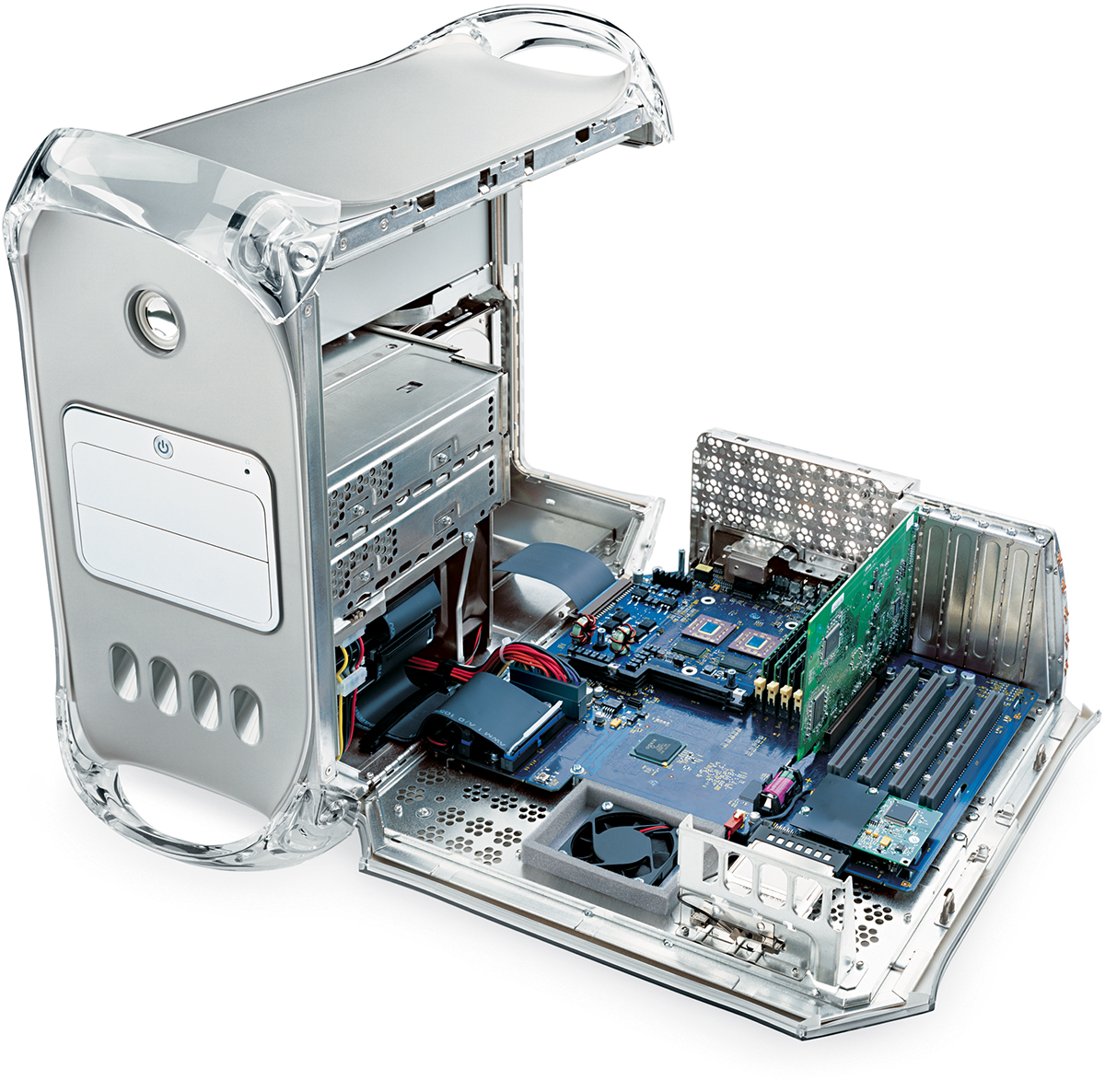 While the Power Mac G5 and Mac Pro ditched the fold-down side, the machines’ shared case design retained the easy-to-reach internals and handles: 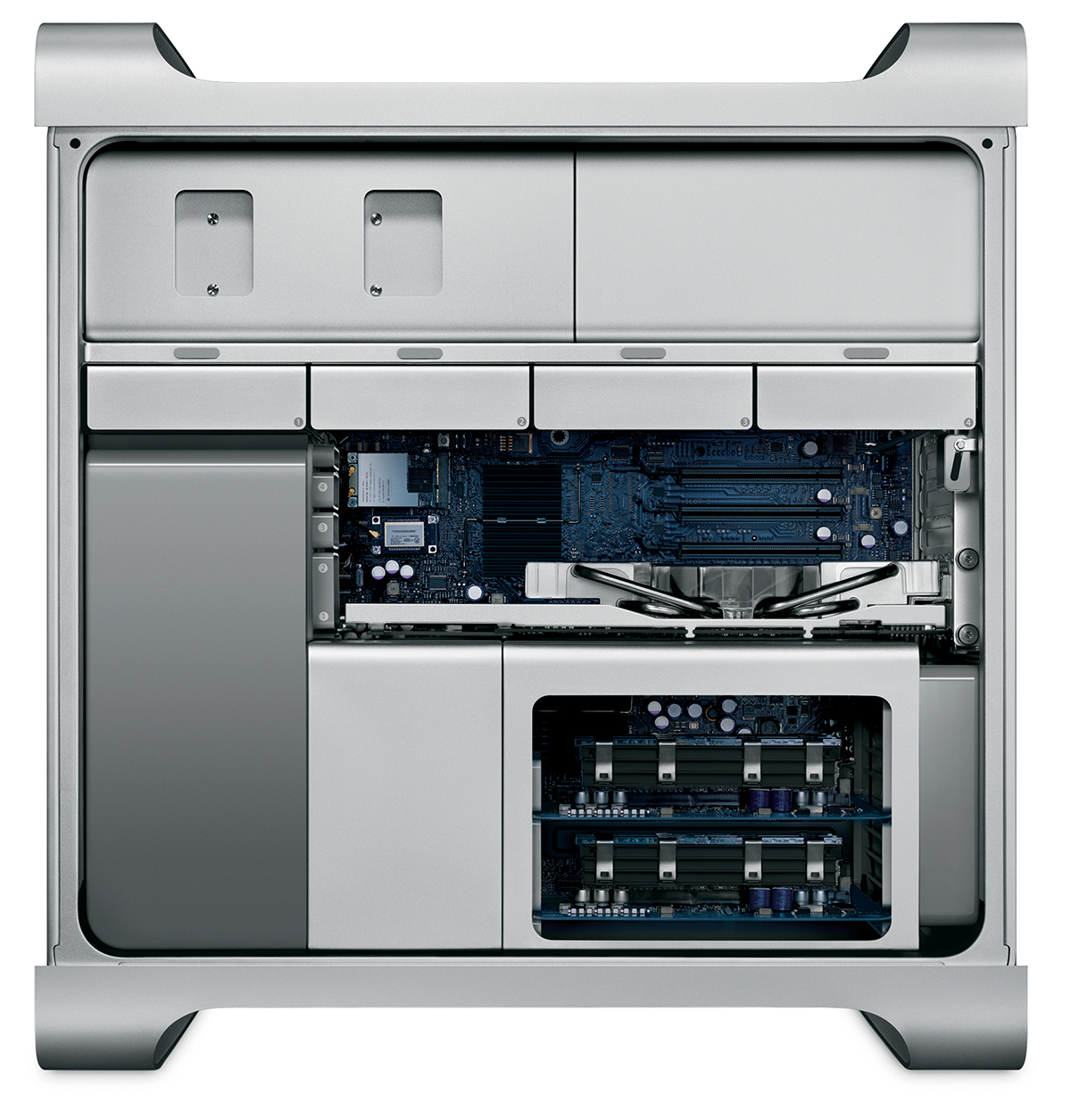 Software wise, the Blue and White has one of the widest ranges of any machine.

Revision A machines came with Mac OS 8.5.1 and Rev. B shipped with 8.6, but all Blue and Whites are capable of running OS X Tiger, thanks to the 1 GB RAM ceiling and FireWire ports.

Beyond its impressive client reach, the Blue and White is important in Apple’s server history, as Steve Jobs used one to demo Mac OS X Server 1.0 for the first time.

The Blue and White gave Apple the power it needed to run the smash up of NeXTSTEP and Mac OS 8. In what may be one my favorite demos ever, Steve Jobs booted a rack of 49 hard drive-less iMacs from a single Power Mac G3.

As future-thinking as it was, except for the most basic of tasks, the G3-powered Blue and White is past its useful lives. Even with overclocking, this machine’s just run out of steam.

In many ways, the Blue and White set the tone for modern Mac towers. Its easy-access door would remain a staple for 14 years, and its inclusion of things like FireWire and Ultra-ATA brought the Power Macintosh into the 21st-century. It holds a special place in the Apple history books, and an important place in my collection. 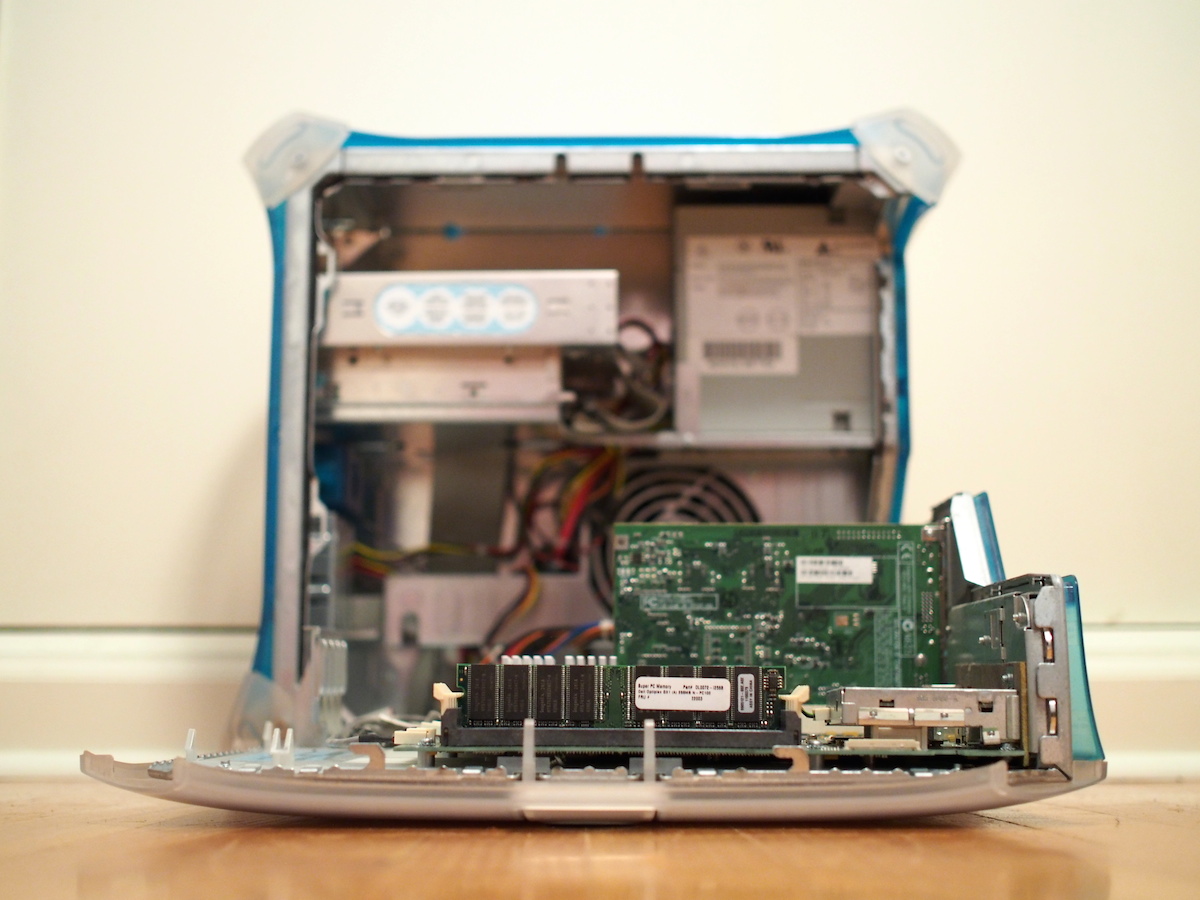