2016 has been a confusing year for Mac fans.

The year has held zero updates to any desktop Mac. The Mac mini, iMac and Mac Pro that are for sale today are the exact same machines that were for sale way back on January 1.

The MacBook got a much-needed speed bump back in the spring, and this fall the MacBook Pro was (finally) revised.

There are now three models of MacBook Pro to choose from:

About two months ago, I sold my 15-inch MacBook Pro and replaced it with a (refurbished) top-of-the-line 27-inch 5K iMac as my main production machine. For my portable needs, I opted to purchase the low-end 13-inch model sans Touch Bar.1 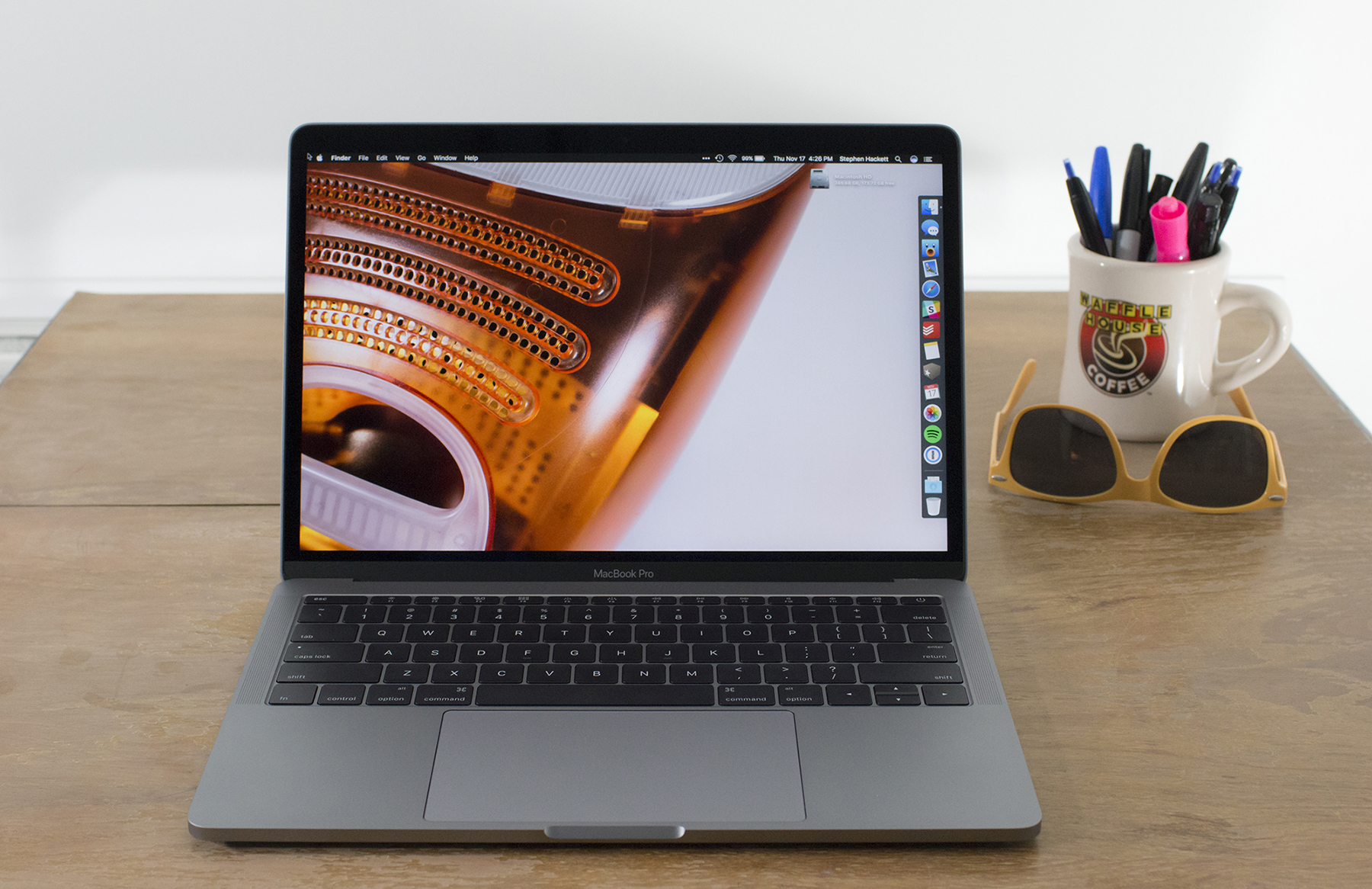 Oh, and I got it in Space Gray because HOT DAMN IT LOOKS GOOD.

In Which I Defend My Choice Not to Buy the Touch Bar Model Even Though, as a Mac Nerd, That’s the One I Totally Should Have Bought

This computer is in my life for two reasons. First, I travel a fair amount for work, and often that requires recording and producing podcasts on the road. That’s often done via my regular USB interface, a larger USB interface or a portable recorder that saves files directly to a SD card.

Secondly, I do like to get out of the studio and work elsewhere from time to time. Most of the time, that involves writing or admin work, most of which takes place with files on Dropbox or stored on Google Drive.

I edit in Logic Pro X2 which while a professional application, isn’t as resource intensive as one might think, if you have a little patience.

(At this point, I’ve never produced a video outside of my studio, but I expect Final Cut Pro X to be mostly usable on this notebook.)

In shopping for a notebook, I wanted something that offered a balance of weight and power that I felt was acceptable. If this computer was my only machine, I would have opted for a 15-inch with an i7. For something that I’m only going to ever use after carrying it out of the house, I wanted it to be thin and light.

This thing being smaller than a MacBook Air and having a Retina display is was what sold me. The new design is 12% thinner and is 13% smaller in volume (and weighs the same) as the Air. In my bag, they are feel exactly the same, but this machine comes with a far better display and is far faster.

The price was another factor. These new machines are pricey, and I could barely justify the $1499 for a secondary machine.

Lastly, I knew that I would end up frustrated if I had the Touch Bar on my secondary machine, but not my main production computer. If (when?) Apple ships a Touch Bar-equipped Magic Keyboard, I’ll reconsider.

(For my thoughts on the Touch Bar, check out this post from the other day.)

Here’s how Phil Schiller announced this machine at the very end of last month’s event:

We challenged our team to take this new design, this new 13-inch MacBook Pro, and could they make a model that would be really exciting for our customers who would traditionally pick a MacBook Air?

So we’re making a model of the 13-inch MacBook Pro with traditional function keys and two Thunderbolt 3 ports. We think a lot of potential MacBook Air customers are going to be very excited about this product, too.

While they may look similar, the traditional-Function-key notebook is much more Air than Pro under the hood. The Escape uses a 15W Core i5 CPU, 1866MHz LPDDR3 RAM and an Intel Iris 540 GPU, while the 13-inch model with Touch Bar uses a 28W Core i5, 2133MHz LPDDR3 RAM and Intel Iris 550 graphics. This means the Touch Bar machine is not only faster, but can run at its top speed for longer.

It’s almost as if the two 13-inch notebooks were different machines. I think that’s confusing, but I see why Apple had to name this a “Pro” machine: price. The MacBook Air is just $999 now, and without it, Apple would be leaving a big gap at the bottom of their traditional pricing structure.

As I wrote at MacStories, it’s an in-between Mac.

In an ideal world, I think this is how Apple’s lineup should look, complete with revised product names:

Apple is stuck with the baggage of old model names. A boy can dream for clarity, I guess.

All of this esoteric handwringing aside, this MacBook Pro has been more than capable for what I need. Logic exports audio slower here than on my iMac, but that is to be expected. Other than that, it feels just as fast. This probably has a lot to do with the insanely fast SSD Apple put in this laptop.

I’ve had mixed luck with the battery. If things are calm, and I’m not pushing the machine, the battery life is great. However, if I’m in Logic, or Photos.app is chewing on my iCloud library or something else is hitting the CPU hard, the battery life really takes a nosedive. It’s so inconsistent that I’m hesitant to leave the house without a charger. If I’m just writing in Byword with the screen brightness down, I can get the 10 hours Apple claims. Under load, that’s easily cut in half. I’ve gone so far as using Safari instead of Chrome when using it.

I’d happily trade some of that Turbo Boost clock-speed for a more consistent experience.

Regardless of the name — or how good it is — the MacBook Escape isn’t nearly as Pro inside as its Touch Bar-equipped siblings.

However, for my needs, it’s perfectly fine. It does have a lot in common with its Touch Bar-equipped siblings, though….

There’s no way around it. You’re going to need some adaptors with this laptop. Here’s what I’m carrying around: 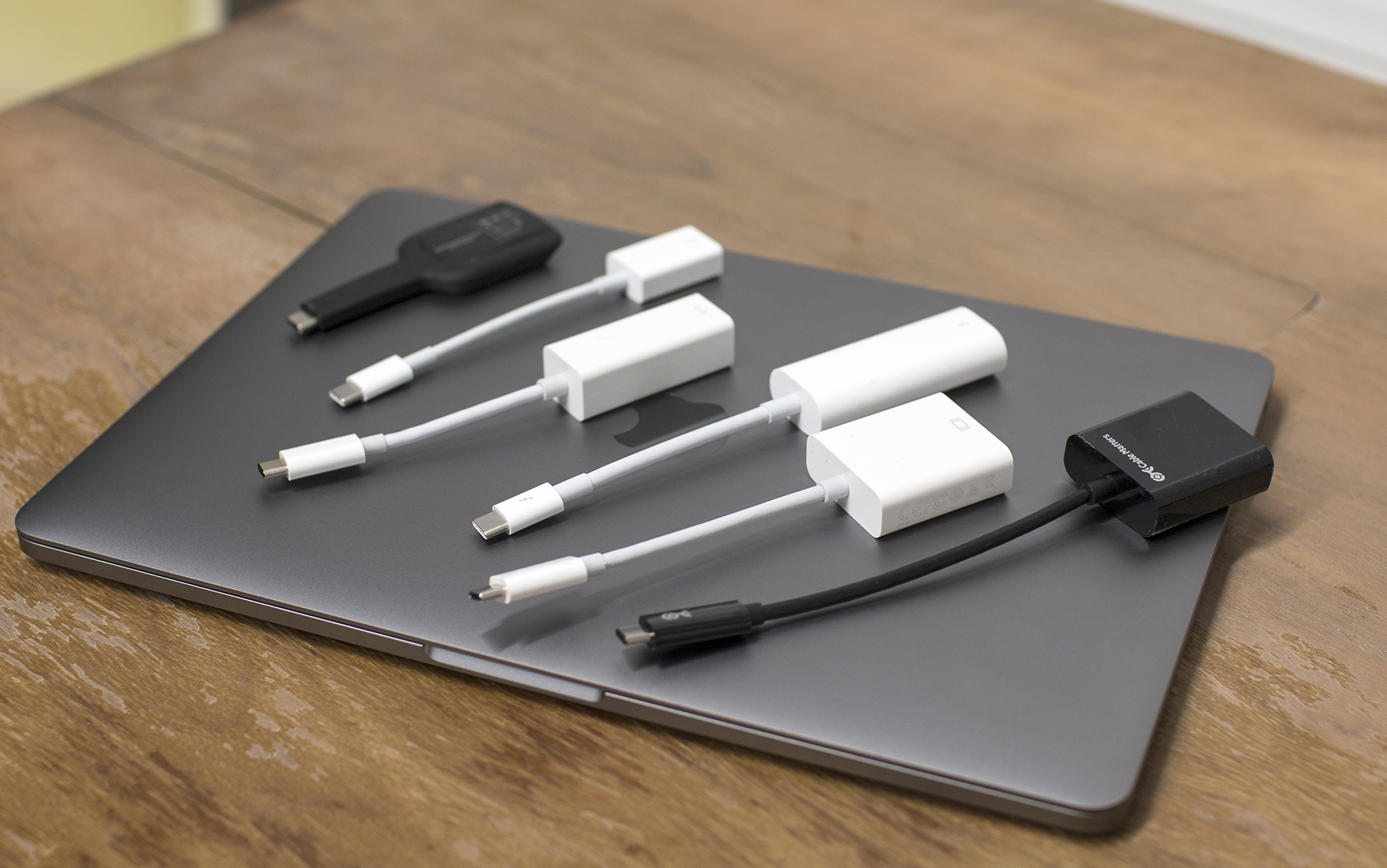 Not everyone will need all of these. I end up in meetings and presentations sometimes, and like being prepared.

While it’s a little annoying to shell out some additional money for these things, I was already carrying several Thunderbolt 2 adaptors. This notebook does require additional adaptors, however, and one really gets under my skin: that SD card reader.

Phil Schiller made this comment to The Independent on the subject:

One, it’s a bit of a cumbersome slot. You’ve got this thing sticking halfway out. Then there are very fine and fast USB card readers, and then you can use CompactFlash as well as SD. So we could never really resolve this – we picked SD because more consumer cameras have SD but you can only pick one. So, that was a bit of a trade-off. And then more and more cameras are starting to build wireless transfer into the camera. That’s proving very useful. So we think there’s a path forward where you can use a physical adaptor if you want, or do wireless transfer.

I’ve never used a camera that’s wireless transfer was worth a damn. My three cameras all use SD cards, as does my portable sound recorder. This technology isn’t going away any time soon. If I want to process photos on vacation or import podcast audio from a hotel room at WWDC, I’ll need to make sure to have that card reader. I sense a disaster in my future. 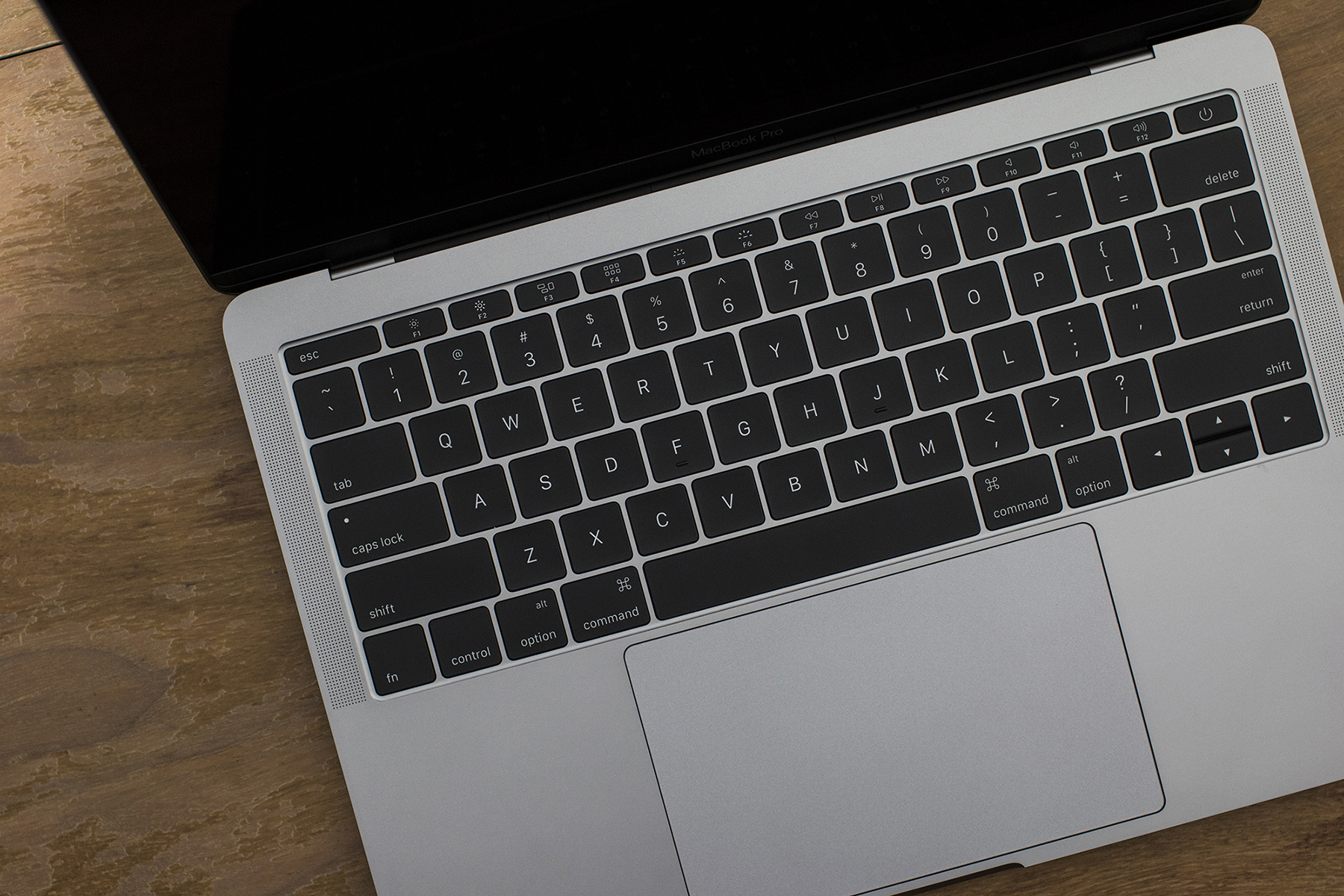 Apple’s claim that their second-generation butterfly keyboard mechanism was engineered to give more feedback. In his review, Jason Snell wrote:

Apple told me that the keys don’t travel any farther than on the MacBook, but that this second-generation keyboard offers more feedback and feels more responsive than the one on the MacBook. That may be true, but there’s no doubt that this keyboard is a progression of the MacBook keyboard, not a revision of the previous MacBook Pro keyboard or Apple’s external Magic Keyboard.

If I hadn’t had read that, I would totally believe that this thing has more key travel than my wife’s 12-inch MacBook. It’s not nearly as much travel as my beloved Magic Keyboard, but I’ve been able to adjust to it. I’ve had to learn not to type with as much force, which is probably better for my hands in the long run.

I was not expecting the keyboard to be as loud as it is. It has a nice, solid sound when the keys smash into the metal below them. You can hear the differences between it, the Magic Keyboard and the iPad Pro Smart Keyboard in this video:

In short: I like the sound, and I can tolerate the keyboard travel.

If I were going to sum up this notebook in a word, it’d be fine. I like the color, weight and screen. The keyboard isn’t as bad as I was afraid, but the adaptor situation is annoying, and will be for some time.

I think Schiller got it right; the Escape is a great alternative to the MacBook Air. If you want something thin, light and with a Retina display but don’t want to spend any more money than you have to, the 13-inch MacBook Pro with Two Thunderbolt 3 ports is for you. If you need the most horsepower you can put in your backpack, spend the money and get one of the Touch Bar models.

Just be sure to order it in Space Gray.