The 13-inch MacBook Pro without a Touch Bar is a weird computer.

Naming stuff aside — including the need for ATP to dub this computer the “MacBook Escape” — it’s a pretty enjoyable notebook. It strikes a great balance, as I wrote in my review:

In shopping for a notebook, I wanted something that offered a balance of weight and power that I felt was acceptable. If this computer was my only machine, I would have opted for a 15-inch with an i7. For something that I’m only going to ever use after carrying it out of the house, I wanted it to be thin and light.

This thing being smaller than a MacBook Air and having a Retina display is was what sold me. The new design is 12% thinner and is 13% smaller in volume (and weighs the same) as the Air. In my bag, they are feel exactly the same, but this machine comes with a far better display and is far faster.

All of that stands up nicely six months later, but I don’t have that computer anymore.

I needed a second Mac to cut open in a YouTube video and bought a base-model 13-inch MacBook Pro with Touch Bar:

My intention was to return it but… yeah.

Most of my earlier review still stands. The keyboard is loud, the trackpad is huge and Thunderbolt 3 requires dongles.

The increased speed is nice, but the battery life on this model seems even less predictable than it was on the Escape. Switching from Chrome to Safari helped, but run time can still be uneven across sessions.

The move from two to four ports is really nice. I use my MacBook Pro for a lot of media work when I’m traveling, and some things would just not be possible with two ports: 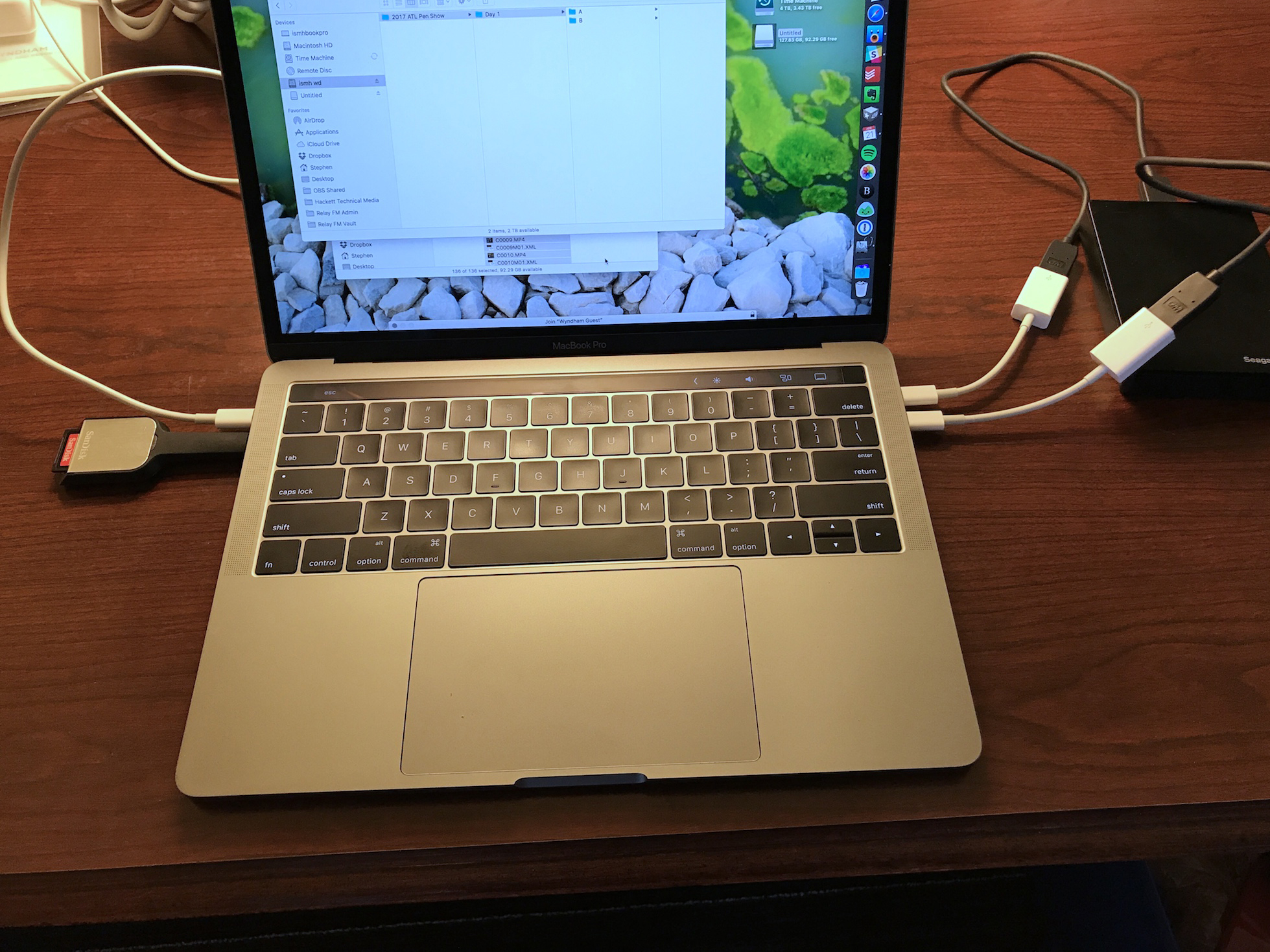 Even though the Thunderbolt 3 ports on the right-hand side of my notebook aren’t as fast the ones on the left, I haven’t run into any problems. All I’m really doing is adapting out to USB 3 most of the time.

Then there’s the matter of the Touch Bar. I think I fall into line with most thoughts on the new technology. It’s very clever, but not super useful at this point. A lot of Apple apps have adopted it, but third-party support has been slower to come.

Control Strip — the right side of the Touch Bar full of system controls — is nicely done and can be easily modified. For example, I ditched Siri and replaced it with a shortcut to launch Mission Control and show my desktop.

I was initially worried that I would get used to the Touch Bar on my MacBook Pro, and then be frustrated that my iMac — my main machine — was missing it. In reality, that hasn’t been a problem. The Touch Bar adds niceties like an emoji picker that makes sense, but I’m so wired into keyboard shortcuts, I don’t feel hampered without it.

I think the Touch Bar has a nice future once it’s adopted more widely, but for now, it’s just polish on top of the Mac experience.

Touch ID, on the other hand, is a huge deal on the Mac. Logging in, making purchases, unlocking 1Password and more are just a thumbprint away. It’s fast and easy to set up, just like on iOS.

I look forward to seeing Touch ID ship on all Macs.

All in all, it was probably a little silly to keep this MacBook Pro and sell the Escape, but I do like this laptop. It’s fast, light and the additional ports are a nice upgrade. It’s not the best MacBook Pro I’ve ever had, but it’s the lightest and the most forward-thinking, for whatever that’s worth.

Unless you need four ports or more power, I’d probably recommend you just buy the one without the Touch Bar for now.