Apple’s press release for the machine is pretty great:

It’s a good thing there’s no law against a company having a monopoly of good ideas. Otherwise Apple would be in deep yogurt for the ideas that Steve Jobs shared with the crowd at Apple’s Flint Center auditorium Tuesday, May 6.

There was, for instance, his idea that you should get everything you need to explore the internet for just $1,299 — and that “everything” means it should include a 233MHz PowerPC G3 chip that’s faster than any Pentium machine out there; that it should come complete with gobs of RAM, a 4-gigabyte hard disk, modem, 10/100 BASE-T Ethernet support, 24x CD-ROm drive, 15-inch monitor, and surround sound; that it should come bundled with Internet Explorer 4.0, AOL 4.0, Quicken 98 and FileMaker; and that it should be the coolest-looking computer on the planet. That idea is the iMac, the most radical idea in personal computing since the Macintosh.

When Jobs — nattily attired in a suit, for a change — revealed the iMac, the excitement in the audience was a palpable thing. The crowd had been eager to see Apple’s new products — lines snaked all over the DeAnza College campus as people waited for the Flint Center doors to open — but even by the time they groped their way to seats, few had any inkling of the surprise in store for them. And judging by their reaction, “whoa” was a wonderfully apposite word-choice for the ad that Chiat/Day (Apple’s ad agency) created for this product.

Go read the whole thing. It’s a lot of fun.1 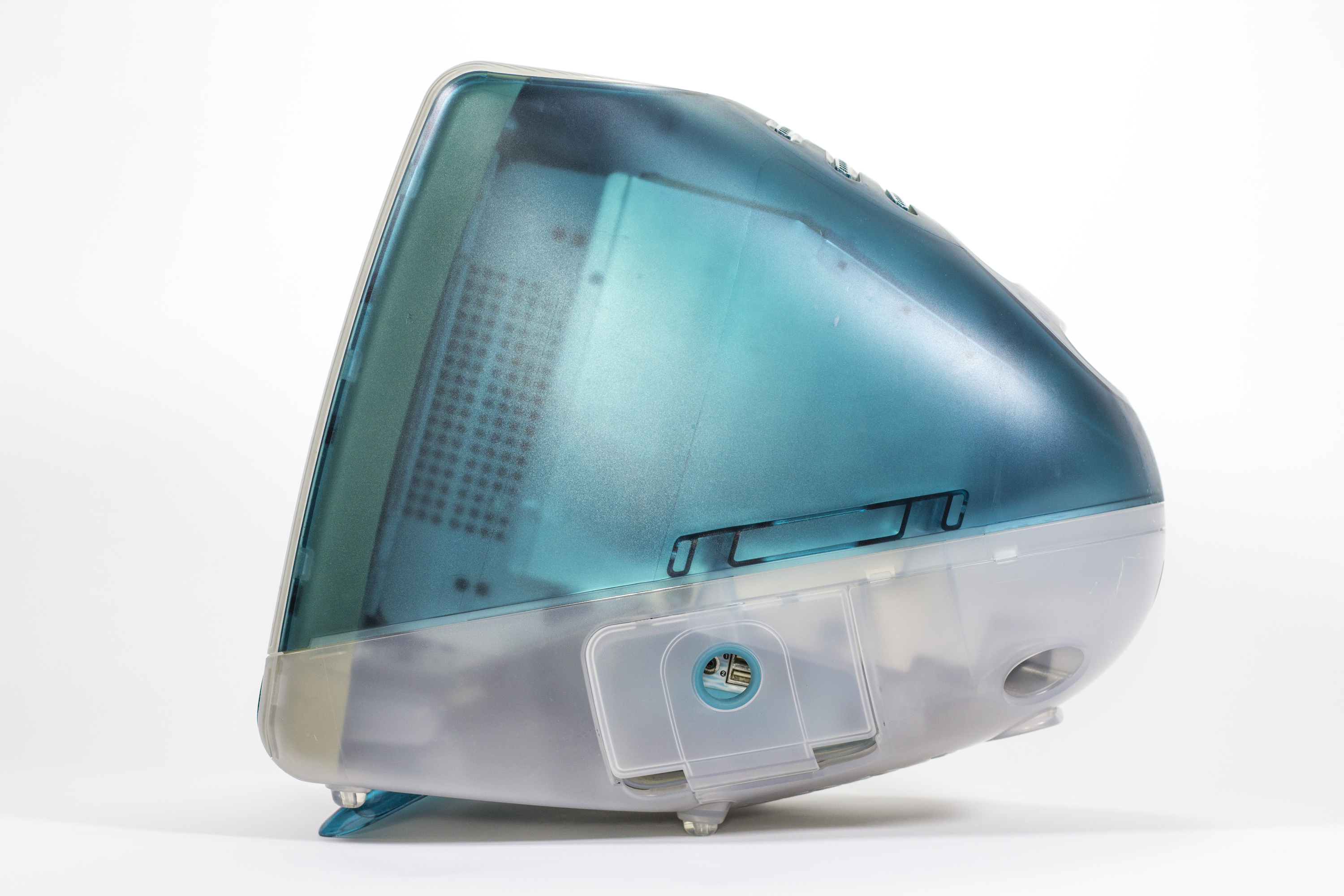 Right away, the machine’s design made waves. In the late 1990s, the entire computer industry was defined by beige boxes. The Mac was not immune to this, which is what made the iMac’s curvy blue lines so exciting.

Here are Andrew Gore and Anita Epler, writing for Macworld in 1998:

It’s hard not to recognize the iMac’s lineage: the all-in-one case, the tiny footprint, even the integrated handle—all suggest the original Macintosh. But this is where the similarities end. Using translucent plastics of “ice” and “Bondi blue” (in homage to the Australian beach), Apple’s industrial-design group created a computer without a single straight line—even the keyboard components are curved. The case allows through just enough light to suggest the outlines of the iMac’s internal works without revealing too much.

Every piece of this system—from cables to key caps—uses translucence, curves, and light to great effect. The round mouse reveals a tracking ball that’s half white and half blue-green—watching the mouse while it’s in motion can be mesmerizing. Adding to the space-age effect, Apple will use holographic stickers for port identifiers, FCC tags, and other labels. A translucent white flip-down foot props up the keyboard, coordinating nicely with the iMac’s aquamarine appendage.

The design may look dated now, but again, it’s important to realize just how big of a deal the design was. Seemingly overnight, consumer electronics started popping up with blue plastic to cash in on the iMac’s fun and approachable design.

The design wasn’t the only new thing about the iMac. While powered by a then-familiar PowerPC G3, the iMac ushered in a new era of computer hardware. Its use of USB ports over Apple’s legacy connectors and its lack of removable storage made many consider the iMac a toy.

Considering all these amenities, the most shocking part of the iMac isn’t what it offers, but what it lacks. The iMac has no floppy drive, which might be forgivable if there were a Zip drive or other removable-media option, but there isn’t.

And most dramatically, this new consumer offering has no SCSI port, no standard serial ports, and no ADB ports. Apple has opted to replace these familiar connections with USB, a high-speed serial architecture that has suffered from slow adoption on the Wintel platform despite its technical advantages (see the sidebar “USB: Ready for Prime Time?”). Currently, no USB devices exist for the Mac.

“Currently, no USB devices exist for the Mac.”

If USB had not taken off, Apple would have been in serious trouble with its new consumer machine. Thankfully, the USB ecosystem started to materialize by the time the machine went on sale in August 1998. 2

Those controversial USB ports were joined by a modem, Ethernet jack and a “Mezzanine” slot, which was a very short-lived expansion option that never really took off. Around front was an Infrared port and a set of headphone jacks, a nod to the iMac’s potential in the classroom. FireWire and a VGA port would appear in October 1999.

The i prefix has defined Apple product names for two decades, but it started here. Jobs explained in his keynote that the i stood for a whole bunch of things:

The only word that really mattered on that list was the first one. The iMac ran the same Mac OS 8.6 as other Macs at the time, but Apple marketed the iMac as the easiest way to get on the Internet with a very clever campaign:

The iMac’s built-in modem and Ethernet port made it slightly easier to connect to the Internet for the first time, but it wasn’t anything that other Macs of the day couldn’t do. Yet, the iMac became synonymous with the Internet. A bunch of iMac G3s got sold in offices and schools, but a whole lot of them got put in homes as Internet appliances.

The iMac G3 was a big bet. Apple was at the end of a multi-year downward spiral, both in its finances and products. People flocked to the all-in-one. Its colorful, friendly design and low price point made it a hit.

The company sold millions of the machine, breathing new life into the company and the Macintosh, giving Apple the runway to build Mac OS X.

The iMac G3 is a machine I have a lot of experience with, having collected all 13, made a bunch of cool stuff with them and then donated them to The Henry Ford Museum.3 There’s no doubt in my mind that is one of the most important personal computers ever made.

After shipping the original 233 MHz Bondi iMac in August of 1998 for $1,299, Apple spent the next several years refining and upgrading the product. The last iMac G3s can run Mac OS X Tiger and were clocked at up to 700 MHz before being discontinued in March 2003.

Over its lifetime, the iMac G3 came in 13 finishes, added support for wireless networking, video out, FireWire and burning CDs. Storage space started at 4 GB on the original model and topped out at 60 GB on the last model. It saw an incredible rate of evolution, being revised every nine months or so for its entire run:

Today is a special day, and one we should use to celebrate a very special computer. Even if you aren’t an Apple history nerd like me, I think you can appreciate the role the iMac G3 played in saving Apple.

To read a whole lot more about this very important little computer, check out my complete iMac G3 archive. If you want to know more about that time in Apple’s history, including the development of Mac OS X, check out my book on the subject, Aqua and Bondi.