Editor’s Note: This is a guest post by Ed Cormany, co-host of the excellent podcast Simple Beep, which focuses on the history of Apple and the Mac.

When Apple announced the new Mac Pro last week, one of the things that got the most attention was its price tag: the base configuration will cost $5,999. The question is whether it’s an outlandish price for what is far and away the most powerful Mac ever sold. The fact is that Apple has definitely charged that much in the past for its hardware. 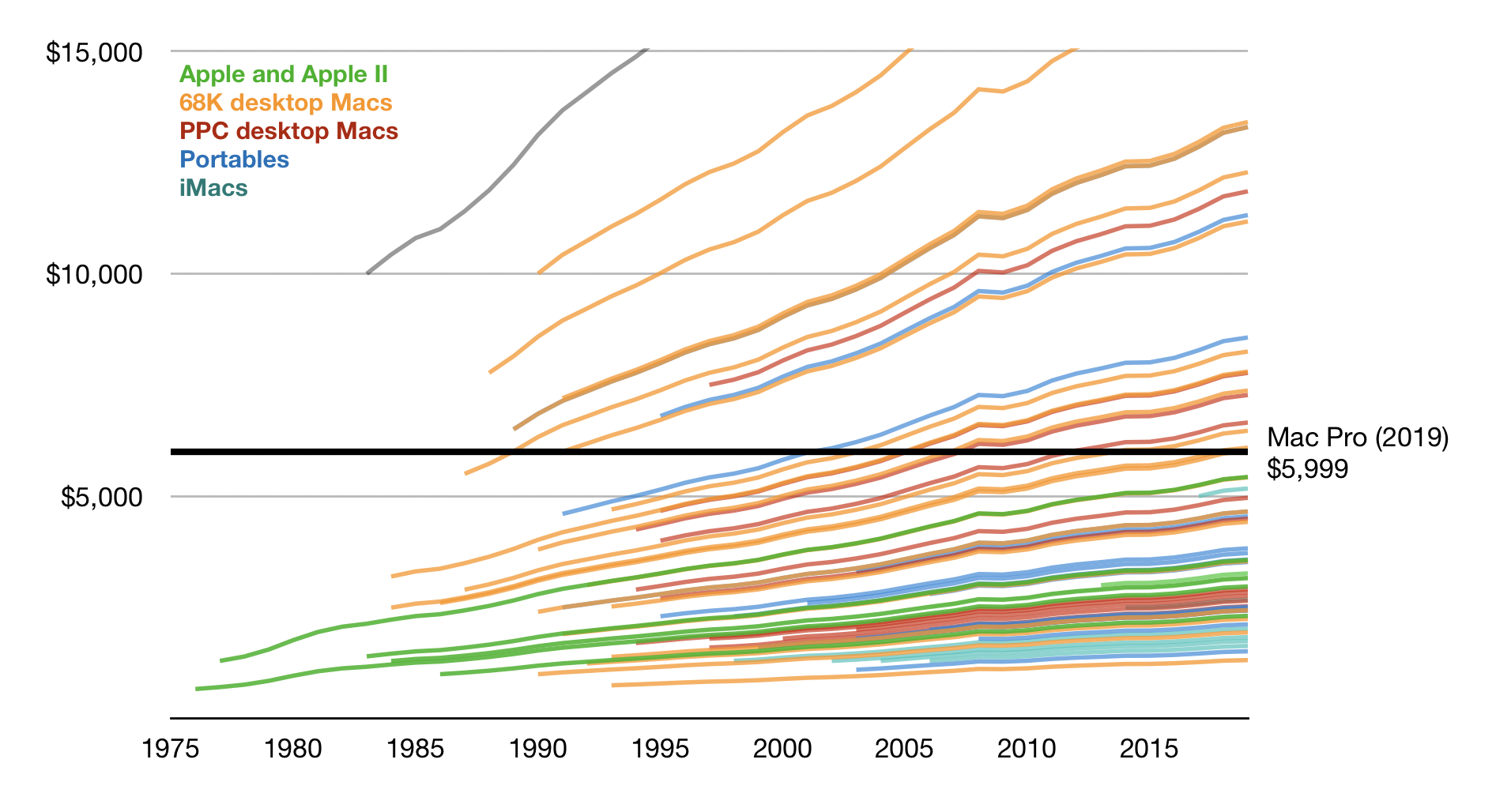 The graph above shows the base prices for 60 different Apple hardware lines, and how those values compare over time accounting for inflation.1 Of course, these computers didn’t actually become more valuable over time, except for collectors items, but this visualization allows for comparison of how much of an impact any given model had on consumers’ wallets. 22 of the models shown cost more than a Mac Pro when adjusted to 2019 dollars, and several of them cost more than $6,000 when they were launched.

Apple I and II – a bargain!

Apple launched their first computer in 1976 for the devilishly competitive price of $666.66. Adjusted to 2019 dollars, that doesn’t crack $3,000. On the other hand, you did have to supply your own case, monitor, keyboard, and cassette decks for data storage. The original Apple II came closest to Mac Pro prices, at over $5,000 in 2019 dollars. In the mid and late 80s, the Apple II line was an absolute bargain compared to Apple’s new product line: the Macintosh.

The 128K Macintosh launched in 1984 for $2,590. At the time people wondered: why would you buy this bizarre all-in-one computer with a black-and-white display and this thing called a mouse for the price of serious, “you can get real work done on it” computer hardware? That’s right, adjusted for inflation the original Mac just outpaces today’s Mac Pro, at $6,088. It’s the same story as it was 35 years ago: buying the future is never cheap.

In fact, no Mac released before 1990 finishes under the Mac Pro line, and a few of them started above it. The modular2 Macintosh II line was wildly powerful and wildly expensive, with models ranging from $5,500 and up in 1987. The all-in-one SE/30, often lauded as the Mac with the greatest longevity, launched at $6,500 and barely stays on our chart in 2019. The priciest Mac ever, the IIfx, started at $10K and achieves escape velocity sometime in the early 2000s.

It literally stands for “low-cost”

The 90s were a time of differentiation for the Mac product line. The Macintosh Classic put affordable components in the familiar Macintosh case, while the LC line delivered simple pizza boxes with color display support. The LCIII had the cheapest sticker price of any Mac for a long time — until the Mac Mini — at $750, or just over $1,300 adjusted for inflation.

Meanwhile, the Quadra line was the Mac Pro of the day, with prices to match. The Quadra 900 was the last ordinary desktop Mac to start above the Mac Pro line, at a whopping $7,200. And if you think that Apple is cheaping out now on its base SSD storage, think again. That base model had no hard drive whatsoever, just an empty drive bay for you to fill with even more of your hard-earned dollars. Even the LCIII had a 40MB hard drive.

The later generations of Power Mac towers had less sticker shock, primarily due to the collapsing of product lines. The grid of four wouldn’t work with tons of numerical model numbers, so only the “good” models of G3, G4, and G5 towers are charted here; they all (even the Cube) retailed for under $2,000 and wouldn’t crack $3K today. Of course, the beefiest tower configurations cost far more than that.

Portables – got it in two

To close out, there are a couple expensive oddities that merit their own mention. The Twentieth Anniversary Macintosh is the latest machine that was introduced at over $6,000, but that comes with an asterisk as it was marketed as a collector’s piece and had its price slashed from $7,500 to $3,500 after just six months because nobody was buying them.

And finally, I haven’t covered the most egregious line on the chart, the one at the top left, not color-coded in any category. It’s Steve Jobs’ biggest losing bet, the Lisa, which cost $9,995 in 1983. At over $25,000 adjusted for inflation, it’s the most costly computer Apple has ever sold. Anyone who has recently said, “Wow, I could buy 5 cheap iMacs for the price of that Mac Pro” might have said the same thing about the Apple II and the Lisa then.

Fortunately for today’s Apple, the new Mac Pro is not nearly the risk that the Lisa was. To be so daring, it would have had to be an all new architecture (maybe ARM-exclusive, leaving all Intel software behind without a compatibility mode) and costing something like $20,000 including the monitor. But the 2019 Mac Pro isn’t foolish bet; it’s a high-end Mac tower offered at a historically consistent price.