Apple’s 2019 iPhone event has come and gone, but calling it the “iPhone event” isn’t quite right anymore, as Apple’s handset shared the stage with the company’s growing collection of content services, the Apple Watch and even a new entry-level iPad.

The event started with a video and a quote from Tim Cook that I think sums up how Apple thinks about itself pretty nicely:

As someone with a sizable Apple collection, this video was made for me:

Of course, the Apple TV’s Siri Remote made an appearance in this video,1 so not everything in it was wonderful.

From there, Tim Cook said he was dispensing with his normal updates to jump into product news, despite the event ending on a rather sleepy Retail update.

Before we get to any details, the most important stuff first: Apple Arcade is coming next Thursday, September 19, and will cost $4.99 a month for the entire family, and Apple’s offering a one-month free trial.

As previously announced, Apple Arcade is a collection of games that will run on iOS, macOS and tvOS, and those platforms only. Apple is working with gamemakers to build titles for its own platforms, and they’ll be free of any in-app purchases or other scammy tactics so often found in mobile games today.

$4.99 seems like a great price to me, and while I’m not a big gamer, I think this is going to prove to be very popular.

Up next, Cook revisited Apple TV+, the company’s upcoming streaming service that is launching on November 1, for $4.99 a month, with a selection of Apple-created shows, with more coming each month. Unlike Netflix/Hulu/Disney+Every Other Streaming Service, Apple TV+ lacks any sort of back catalog of content, so I’m glad to see Apple didn’t take the highroad when it came to pricing.

Cook shared his excitement that the trailers for The Morning Show, Dickinson and For All Mankind have done so well online, before rolling a trailer for See, a show about the future of the human race, in a world where our sight has been taken from us.

Starring Jason Momoa, the show looks good. Honestly, out of the four trailers, the only one that doesn’t interest me that much is Dickinson. I hope to crash an episode of The Incomparable about For All Mankind later this fall.

Interestingly, Apple did not announce a services bundle, but any customer who buys a new iPhone, iPad, iPod touch, Mac, or Apple TV will get a year of Apple TV+ for free.

The first hardware of the day surprised me. Apple introduced a new entry-level 10.2-inch iPad replacing the $329 9.7-inch model. 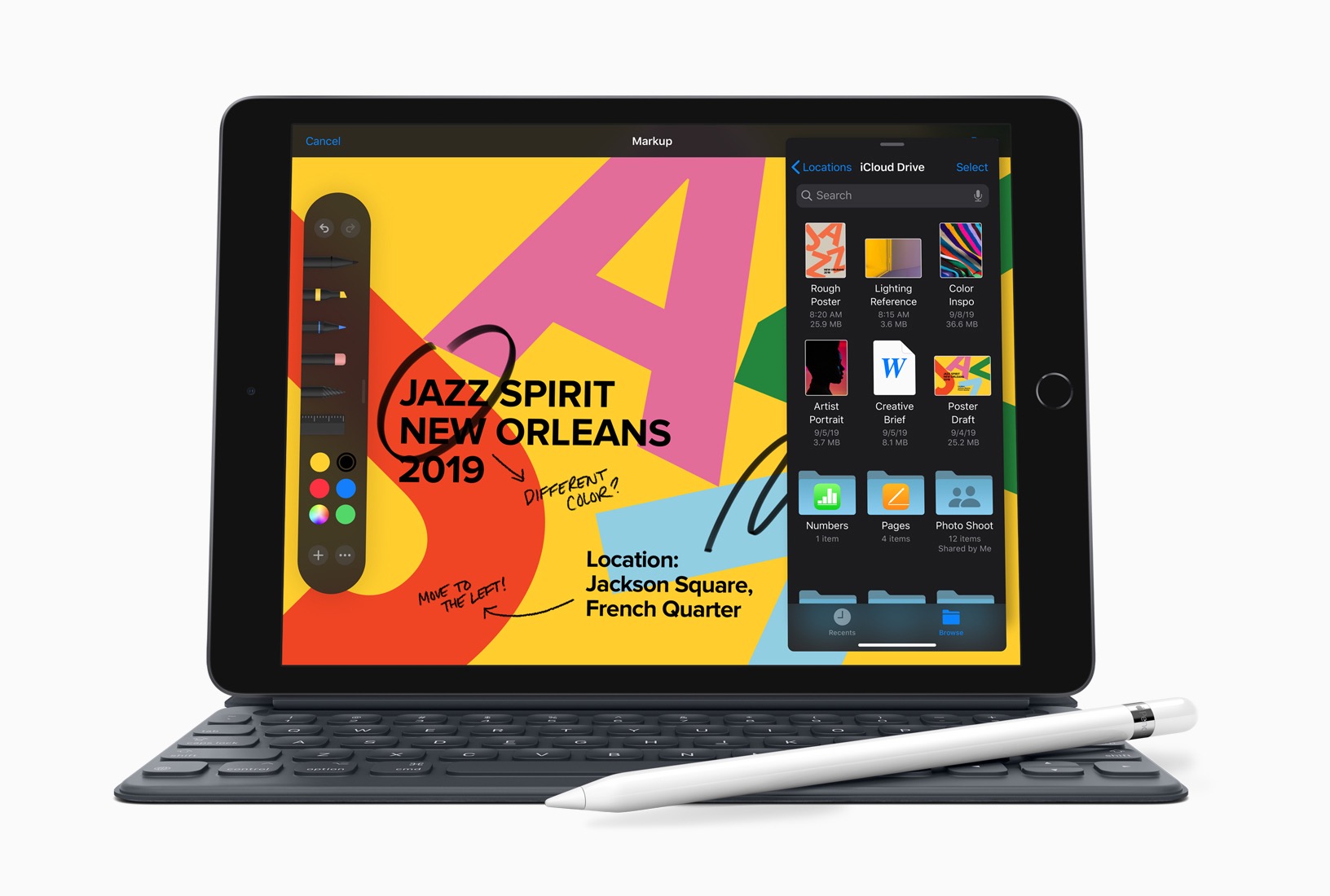 The new iPad uses the A10 Fusion CPU from the iPhone 7, same as the outgoing 9.7-inch model. However, the new screen has been paired with a Smart Connector, so Apple’s foldable Smart Keyboard cover can be used with this iPad.

Like the out-going 9.7-inch, this iPad supports the first-generation Apple Pencil and has a Lightning port.

The elephant in the room is the 10.5-inch iPad Air, which also supports the Smart Keyboard, Apple Pencil. The iPad Air starts $499 for a Wi-Fi model with 64 GB of storage, a big jump from $329, even if that entry-level iPad has just 32 GB of storage.

For the additional money, the iPad Air comes with:

So, is the iPad Air worth the upgrade in price? I think so, but I don’t think anyone walking into an Apple Store will understand that, as they look the same, support the same accessories and are practically the same size. Yes, the screen on the Air is a lot nicer, and it’s a lot faster, but is that enough?

Going into this event, very little was known about the next Apple Watch, and it turns out, this year is mostly about improving the performance of the Watch, with the exception of one big feature: an always-on display.

For the first time, someone wearing an Apple Watch will be able to tell the time without turning their wrists or tapping their Watch. Apple has achieved this by tinkering with the display and the hardware that drives it, while still claiming all-day battery life.

Another big feature, in my mind at least, is that Apple is uncoupling the Watch and band when you purchase. As always, they have suggested pairings, but now ordering a different band at the time of purchase is super simple. I think a lot of people ended up with spare bands they did not want, and this should help with that.

The much-rumored sleep tracking feature was not announced, but those interested in it should download Sleep++ anyway.

The Series 5 looks the same as the Series 4, with its larger screen and slimmer case, but this year Apple has a couple of new case options, including brushed titanium and the return of the ceramic Apple Watch. These models have been branded “Apple Watch Edition,” a name I did not think we’d ever see again.

Titanium is one of the most sought-after materials in the watch world. It’s 45 percent lighter than stainless steel, yet has twice the strength to weight ratio. For the natural brushed titanium finish, Apple invented a whole new surface treatment that is stain and fingerprint resistant to keep it looking immaculate. The space black titanium finish uses a diamond-like coating, making it both beautiful and incredibly durable.

Ceramic makes a return to Apple Watch. Sleek, light, and extremely durable, it’s more than four times as hard as stainless steel — with a pure, white finish that won’t scratch or tarnish. Every ceramic case is compression molded, sintered, and polished to a striking shine with a diamond slurry, a process that takes days.

Both options look great, but are more expensive than the stainless steel Apple Watch, starting at $799 for the Titanium and $1,399 for the ceramic.

The Series 3 is hanging around at a starting price point of $199.

As for me, I’m going to be sitting this Apple Watch revision out. I have a Series 4 that I wear when working out, but I’ve moved on from the Apple Watch in day-to-day use.

As rumored, the old iPhone XR has become the mainstream iPhone, this time called the iPhone 11. Like last year, it is built around a 6.1-inch LCD screen complete with Face ID and comes in a bunch of colors: 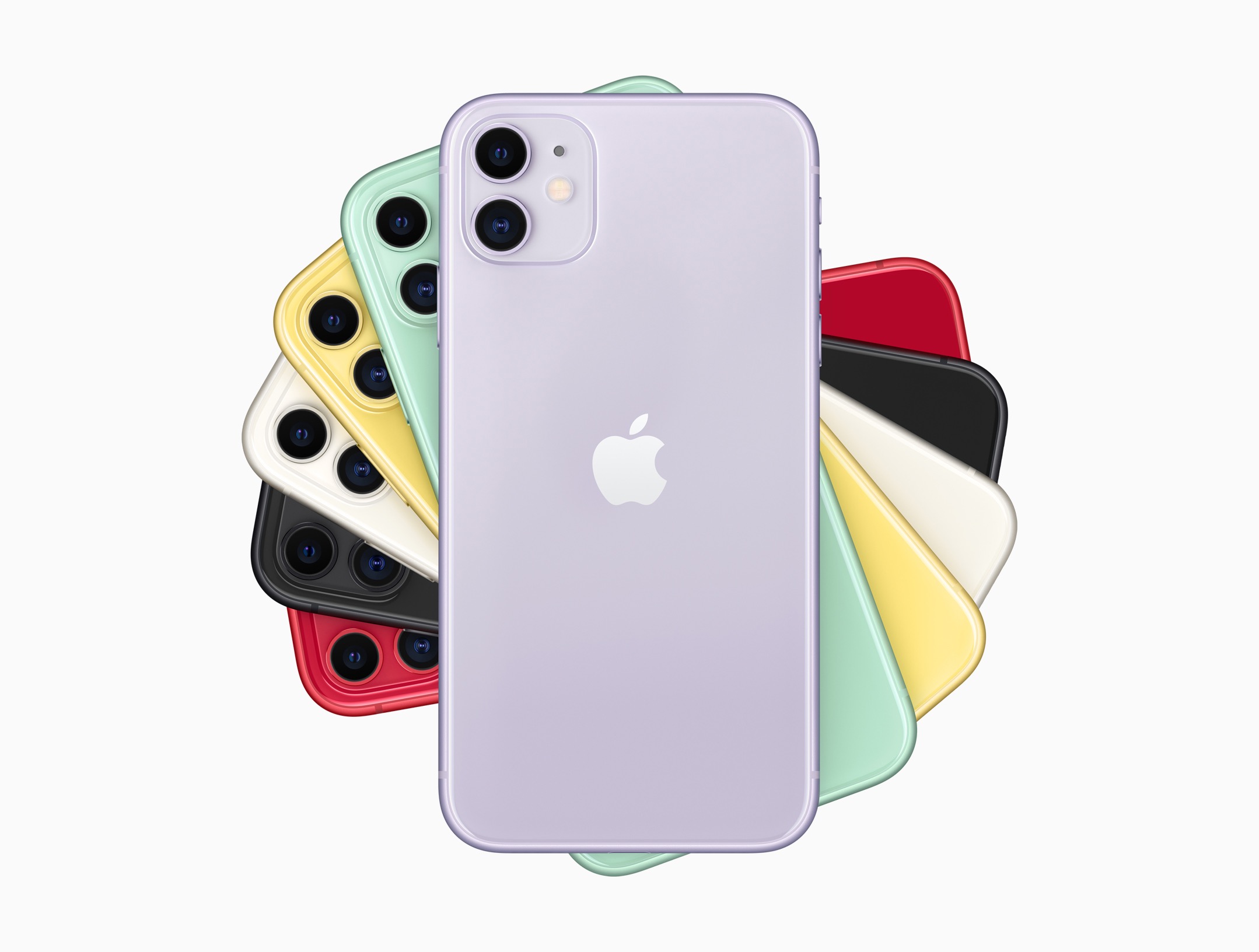 I much prefer last year’s selection of brighter colors, and I am sad to see my beloved blue iPhone go away.

On the inside, Apple has followed in last year’s footsteps as well, making the iPhone 11 and its more expensive siblings all powered by the same A13 Bionic chip.

Around back, the 11 has picked up a second camera. The new ultra-wide camera shoots 12MP images through a 5-element, 13mm lens with a 120 degree field of view. I think it’s going to be a lot of fun.

Going into this cycle, I had assumed the rumored ultra-wide lens would the third camera on the back of the more expensive phones, with the telephoto trickling down to the 11. I was wrong; this new phone has the same new ultra-wide shooter as the other two phones, which boast being the only models with the telephoto option.

Clearly, Apple thinks more people will use the ultra-wide than the telephoto, but the lack of the telephoto option was the one feature that made the iPhone XR unusable for me. Perhaps I’m just in the minority, but being able to zoom in is important to me.

Battery life this year is up one hour over the iPhone XR, and water resistance on the iPhone 11 is rated for a depth of 2 meters for up to 30 minutes.

The iPhone 11 is a correction for Apple, realigning the product line to how customers thought of it, and the iPhone 11’s new price of $699 is a reflection of that. I suspect this phone will sell very well to people still holding onto an iPhone 6S or 7.

The replacement for the iPhone XS introduces a new name to the iPhone line — Pro. On stage, Phil Schiller said that names means that Apple believes that high-end users can get all their work done with the product. That aside, I think the name makes sense within Apple’s universe.

The bigger phone being named the iPhone 11 Pro Max is bad, though. So, so bad.

The new phones match the old in terms of size, but the rear glass has now been treated to have a matte finish, and a new color has been added — Midnight Green. 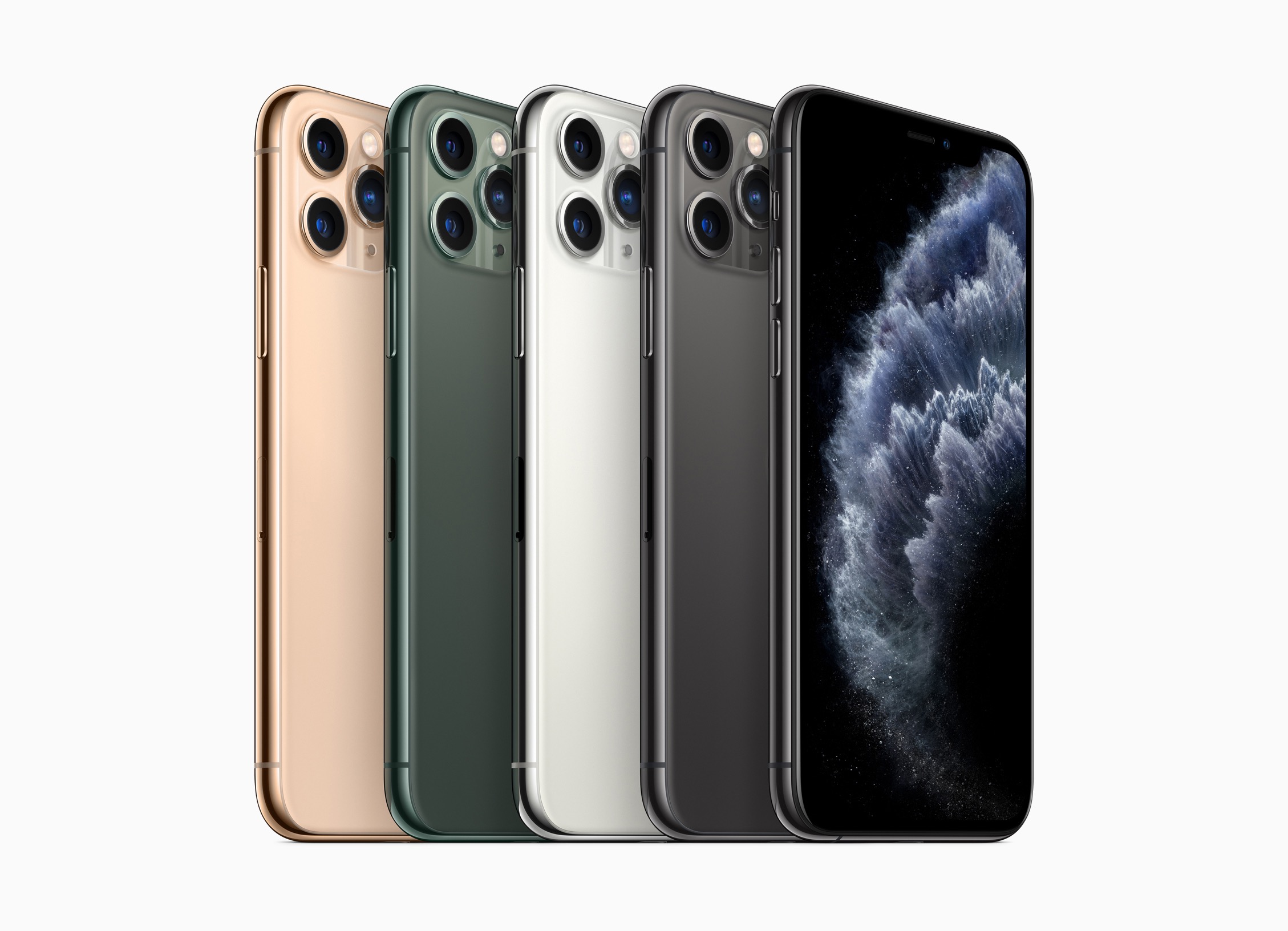 When I saw the color, I thought of the Newton, but according to people on Twitter, it’s a popular color in China.

The iPhone 11 Pro picks up the same CPU and GPU performance gains at the 11 thanks to the A13 chip, as well as the new ultra-wide camera. Apple showed how video recording can be handed off between the various cameras without any change in color, temperature or focus, which is really impressive.

Both the 11 and 11 Pro are picking up new Night Mode, which is long overdue. Google and others have been out in front here for a while.

Like the 11, these devices see a jump in battery life: 4 hours from the iPhone XS to the 11 Pro, and 5 from the XS Max to the 11 Pro Max. All of this is despite a much brighter “Super Retina XDR Display” which can now max out at 1,200 nits.

One thing missing from the keynote was the rumored Apple Tags, but Apple’s website seems to point in their direction:

With U1 and iOS 13, you can point your iPhone toward someone else’s, and AirDrop will prioritize that device so you can share files faster. And that’s just the beginning.

Details on this are sparse; the U1 doesn’t even appear on the phones’ Tech Specs page.

Something else that doesn’t appear on any of the new phones? A USB-C port, or 3D Touch. Apple is using Haptic Touch across the board now. As this gives every phone and the iPad a more consistent experience, I’m mostly okay with the loss of 3D Touch.

Apple has some unfinished business this year, especially in terms of Mac hardware, so I expect to see another event in October. With a messy software release schedule, the company is clearly playing catch-up in some areas, so October may be a nice change to demo some of the iOS 13 features that will be missing when customers unbox their iPhones next week.

Even with iOS 13 being a bit of a mess, I’m excited to check out the 11 Pro next week. That ultra-wide camera should be a lot of fun, and I am looking forward to seeing better battery life from my iPhone. The XS hasn’t been great in that regard for me.