When Apple announced that its Reminders application was receiving a much-needed overhaul this year with iOS 13 and macOS Catalina, I was excited. I think Apple has done an amazing job at modernizing the Notes app, and I was hopeful Reminders would become an equally useful application across Apple’s platforms.

I’ve tried just about ever task manager out there: OmniFocus, Things, Remember the Milk, 2Do, TickTick and more. I usually end up back in Todoist for its reliable sync, coupled with its lightning-fast native language processing for inputting tasks. Many applications require too many clicks or taps to create a new task within a given project, with a due date.

Past reliable syncing and natural language processing, I also prefer applications that can keep tasks within a project sorted by due date. Things, Remember the Milk and 2Do — among others — can do this, but Todoist always adds a new task to end of a list, requiring me to resort my projects on a regular basis. This is quick enough on the Mac and iOS, but still annoying.

I don’t often use Siri to add tasks to my system, but Shortcuts support is critical for me. I love being able to send a URL to my task lists, either for linking on 512 Pixels or just to check out later. Currently, Todoist’s shortcut integration is completely broken, with a fix coming “soon,” according to the Todoist support engineer I spoke to about it a month ago.

The vast majority of the tasks in my system are repeating tasks. Running a business means doing a lot of the same work, over and over, on a weekly, monthly, quarterly or even annual basis. Managing these — and being able to adjust them on the fly — is critical, which is why I cannot use Things as my task manager, as it doesn’t allow me to easily complete repeating tasks early.

All of that is to say that Reminders looks like it could be the magic bullet for my GTD pain. Now that iOS 13 is less bumpy than it was, Reminders seems to be syncing well enough, so last week, I re-created a single project in the app to run it in parallel with Todoist.

It didn’t go well. Here are some of my complaints:

Sorting in Reminders is just weird. Items in a list can only be sorted when on the Mac, and the sort order doesn’t seem to stick for very long. Worse, when a list is sorted by due date, items with no due date appear before items with due dates … which is madness.

Entering tasks is clunkier then it should be. On iOS, Reminders relies on the QuickType bar for making the typed word “Tomorrow” the due date for the task. It’s awkward, and In this example, I’ve typed the word “tomorrow” in the task name field, but to make it the due date, I have to tap it above the keyboard. Reminders should be confident enough to use what I type as metadata. At least repeating tasks can be created at the same time: 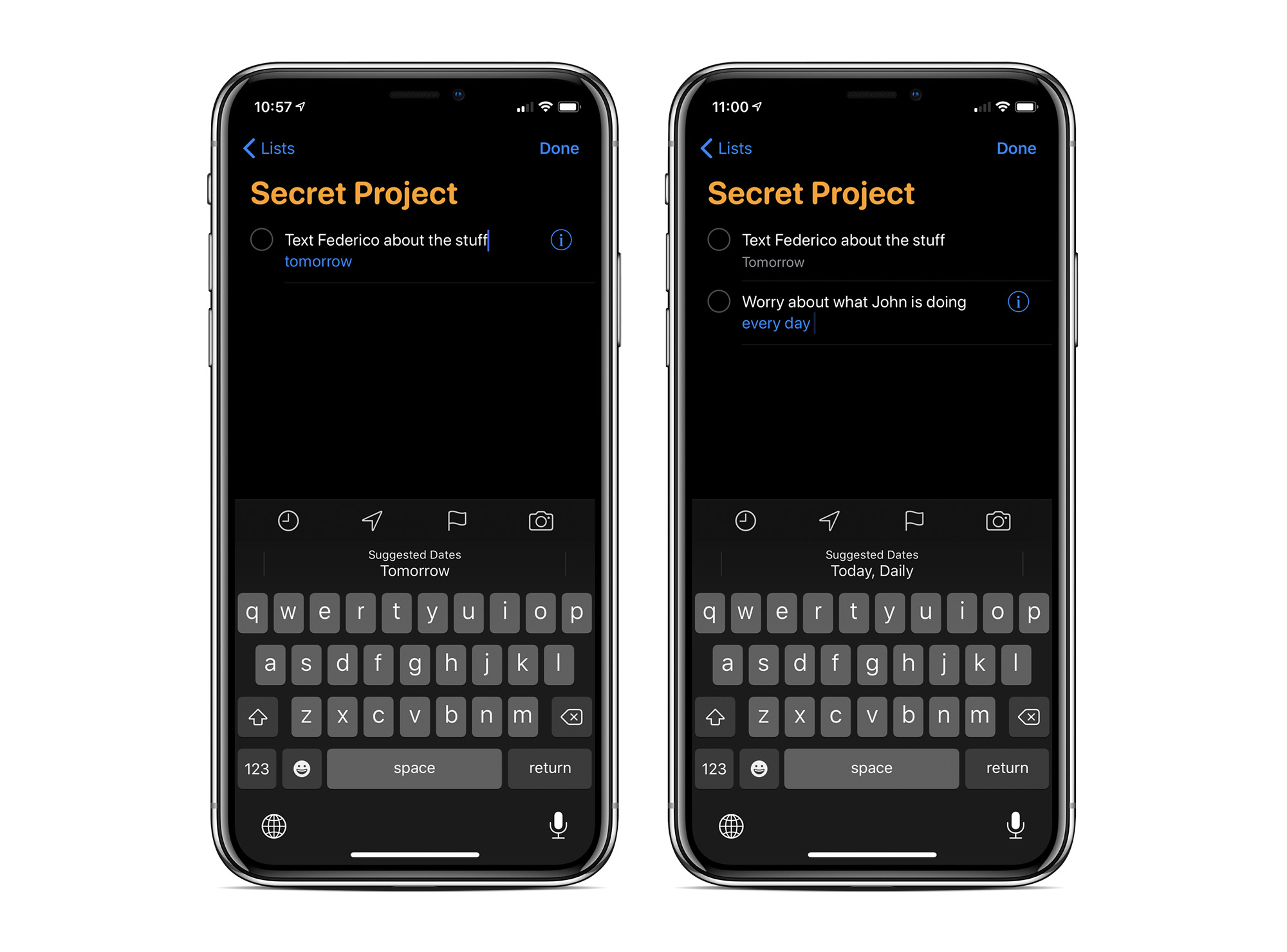 The app can get a bit junky. This is a personal preference thing, but I don’t need to see all of the metadata on a given task at once. In this example, I added a due date, location, note, URL, flag and an iMessage reminders to a single task. Some of this could be stashed away behind the i button. 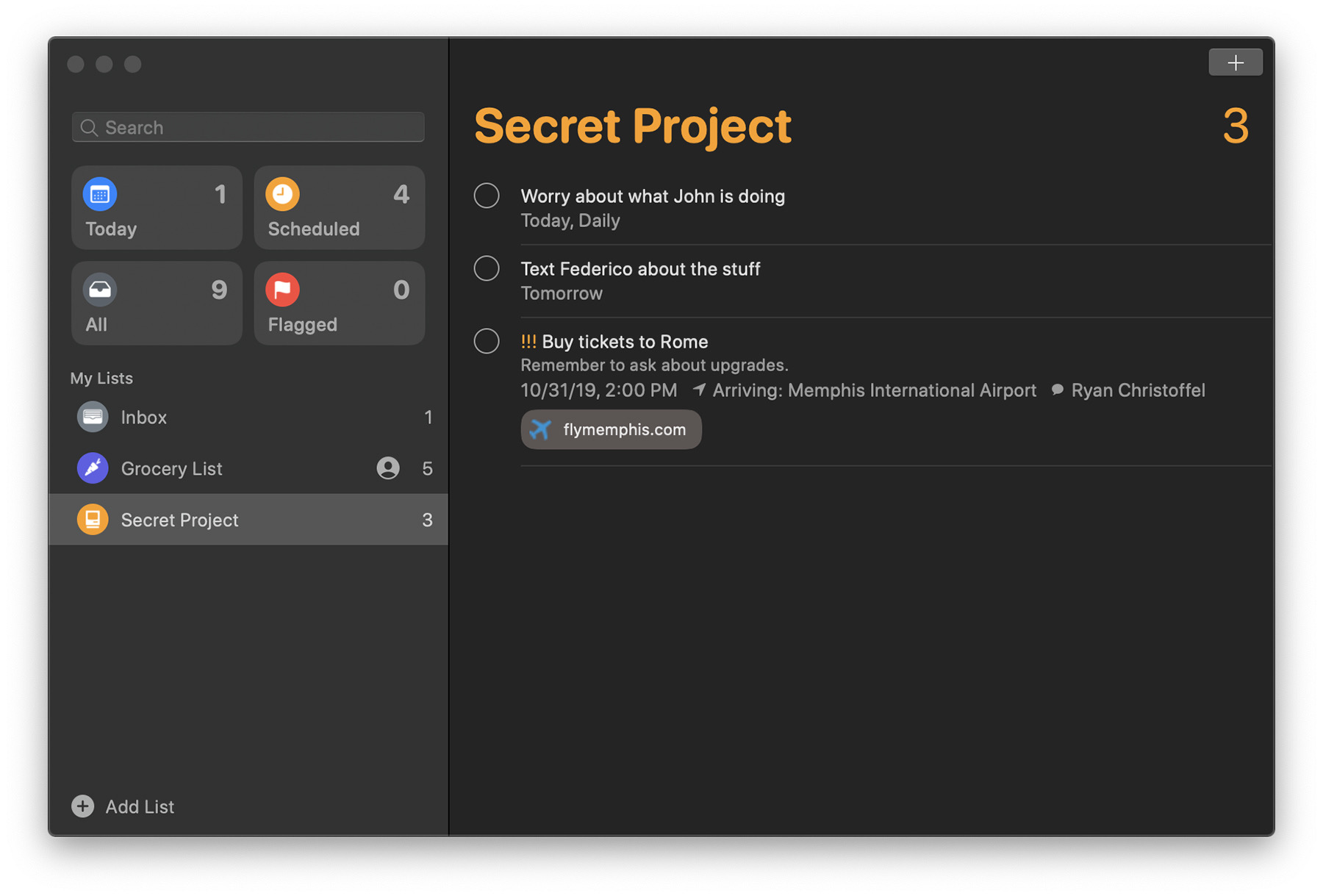 The user should be able to customize what they see in this view, including the default text size, which is both too small and unchangeable on the Mac, not unlike Notes was for a long time after its reboot.

I want to use Reminders. I like using default apps when they meet my needs. My complaints may be esoteric, but that’s how things are when dealing with task managers. Hopefully Apple puts some of these things on its own task list, because so much about Reminders is great.