Today marks a full decade since STS-135 — the final shuttle mission — lifted off. Atlantis and a crew of 4 delivered a year’s worth of supplies and many spare parts to the International Space Station, the on-orbit laboratory that the Shuttle was largely responsible for constructing.

Jason Snell was there for the launch:

Hard to believe this was 10 years ago today–and that this was my view of it. #STS135 and the end of the Shuttle era. pic.twitter.com/XmiTRicIRr

In the years since, NASA has seen its target for the next generation of spacecraft and missions changed several times.1 However, in recent years, the Commerical Crew program has come into its own, with SpaceX taking crew members back and forth from the ISS. (Boeing is a little behind but will hopefully come online with its Commerical Crew program next year.)

NASA itself has been building the Space Launch System for nearly as long as the Shuttle has been retired. Its purpose will be to send astronauts and payload to the moon. It will be a monster of a rocket, matched only by its massive budget overruns and revamped schedules. 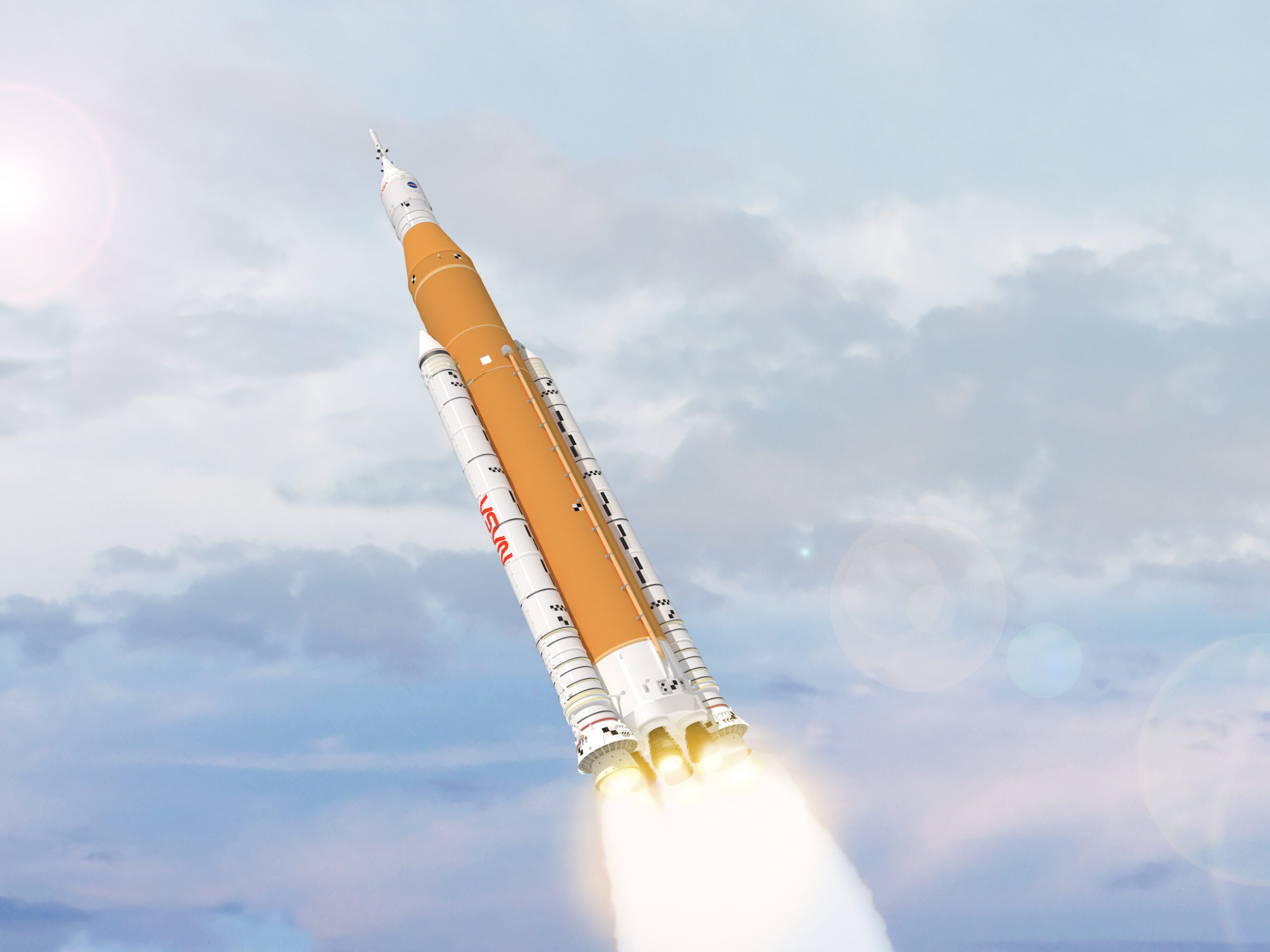 A rendering of the SLS.

On Liftoff, Jason and I have been critical of the SLS program. There are many who feel that is a vehicle without a clear purpose, as opposed to something like the Saturn V, which was custom-built for the Apollo missions of the 1960s and 70s.

There is also criticism that says the rocket is just a jobs program. It is true that SLS vendors can be found in nearly every state of the nation, even if the main work is taking place within NASA’s own space centers, by a joint team of NASA and Boeing engineers, as well as folks from other various companies.

This type of public/private partnership to build spacecraft is not new. Rockwell was behind the space shuttle itself, while Thiokol built its solid rocket boosters (which have been upgraded for SLS duty). Grumman built the Apollo Lunar Module, while North American Aviation was in charge of the Apollo Command and Service Module.

What is new is direct competition. SpaceX’s Starship will be capable of reaching the moon, landing them on the surface, then bringing them home. As mentioned before, SpaceX and Boeing will be taking crew members to the International Space Station and back. Blue Origin and ULA are working together on a new rocket, with the former angling for a spot in the Human Landing System Program.

Beyond these large companies are dozens working everything from future space stations and cubesats to launch vehicles and rovers… and that’s not to mention that China, Russia and others are already making space history of their own.

Competition is good. It can let NASA focus on what it is good at, while letting its partners take over other tasks, such as keeping the ISS staffed and supplied, via the Commercial Crew program.

The Shuttle program wasn’t perfect; its legacy may be the ISS, but it is marred with the death of the crews aboard Challenger and Columbia. Combined with the fact that the vehicle was less capable and shockingly more expensive than originally estimated, it’s not uncommon to have complicated feelings on the subject.

Looking at the SLS program, I can’t help but get some of those vibes. Yes, its design is far simpler and should be much safer, but the federal government — NASA included — doesn’t seem to have a clear vision of what it’s for. NASA is building it to be human-rated, so crews can take it to the moon, but Starship is on that path as well for way, way less money. I have no doubt as the 2020s tick on, we’ll see other companies working toward crewed flight beyond the ISS as well.

I can’t help but wonder what NASA could do with the SLS funding, but applied to things like Earth sciences, robotic missions, observatories and more. If the US would be willing to purchase launches from partners and let NASA focus on other things, it could radically change how much we know about our own planet and planets we’ve yet to discover. And yes, it can even put boots on the lunar surface and beyond.

The Shuttle wasn’t the ideal vehicle for the job, and I’m not sure the SLS will be, either.