This morning, Apple took the wraps off a new 16-inch MacBook Pro. 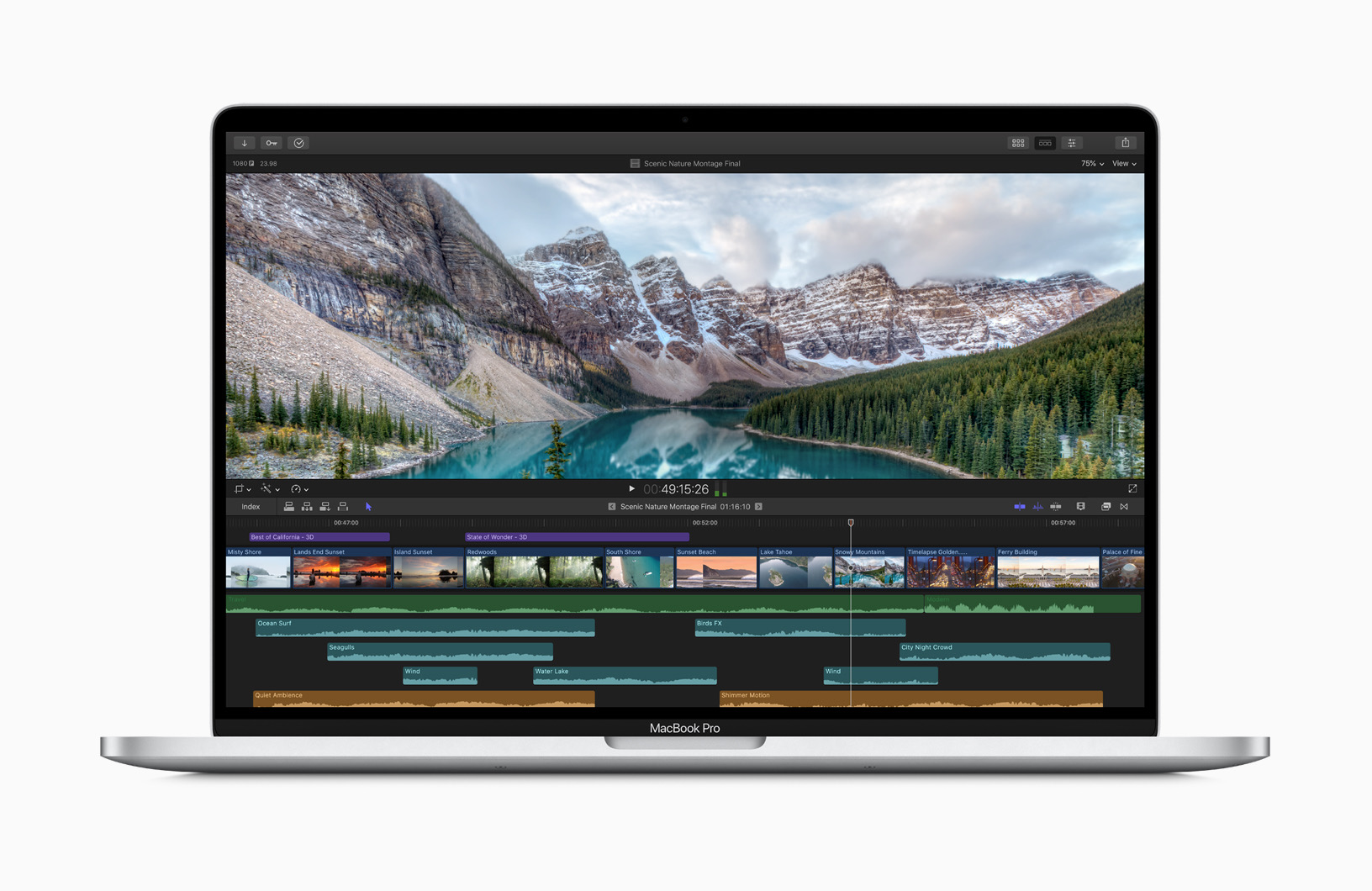 This new notebook is not a radical departure from the MacBook Pro we’ve known for the last three years, but Apple has made some changes that should make using the premiere mobile Mac a lot nicer. Here’s a bit from that press release:

The all-new MacBook Pro features a brilliant 16-inch Retina Display, the latest 8-core processors, up to 64GB of memory, next-generation graphics with up to 8GB of VRAM and a new advanced thermal design, making it the most powerful MacBook Pro ever.

Before we get to what’s new, let’s talk about what has not changed. The Touch Bar is still mandatory, and the only ports are a pair of Thunderbolt 3 ports on each side. The headphone jack is still present as well, but it continues to be on the right side of the machine.1 The trackpad is still enormous, and the general look of the notebook’s chassis is unchanged. I would imagine that spotting these in the wild may be a bit challenging.

That’s not to say these won’t sell; contrary to the rumors, this is not a new high-end MacBook Pro. It replaces the 15.4-inch machine entirely. If you want a MacBook Pro, they come in two sizes: 13 and 16 inches.2

This MacBook Pro comes with smaller bezels, allowing Apple to cram a larger display into a chassis basically the same size as before. It marks the first time that Apple has shipped a notebook with a 16-inch display. The outgoing MacBook Pro measured in at 15.4 inches, and of course, Apple shipped a bunch of 17-inch notebooks back in the day.

This new display supports 500 nits of brightness, same as before, and of course it includes True Tone, P3 wide color and everything else we’d expect from a machine of this caliber from Apple.

I’ve buried the lede here, but with the new 16-inch MacBook Pro, Apple has made its first move in killing the butterfly keyboard that first shipped with the original Retina MacBook back in 2015.

The problems with this keyboard are well documented, and while I wish every Mac notebook had a new keyboard today, it’s safe to assume that Apple will get there sometime next year.

Starting at the top of the keyboard, the Touch Bar and Touch ID sensor are still present, joined this time by a physical Escape key.

In the bottom right corner, Apple has returned to half-height left and right arrow keys. This breaks the visual symmetry of the keyboard, but makes it far more functional for macOS users who use arrow keys to blast around text or code on a daily basis.

The big story is, however, what’s under each and every keycap. Here’s a bit from Apple:

The 16-inch MacBook Pro features a new Magic Keyboard with a refined scissor mechanism that delivers 1mm of key travel and a stable key feel, as well as an Apple-designed rubber dome that stores more potential energy for a responsive key press. Incorporating extensive research and user studies focused on human factors and key design, the 16-inch MacBook Pro delivers a keyboard with a comfortable, satisfying and quiet typing experience. The new Magic Keyboard also features a physical Escape key and an inverted-“T” arrangement for the arrow keys, along with Touch Bar and Touch ID, for a keyboard that delivers the best typing experience ever on a Mac notebook.

Apple doesn’t like to admit that it’s wrong, but will be the first to let you know when it’s made an improvement. In this case, the Apple representatives I talked to admitted that while many people liked the butterfly keyboard, “some didn’t.” (That feels like a bit of an understatement.) Regardless, Apple spent time reconsidering what users wanted out of their keyboards, including doing a lot of internal research—and the result is that this new MacBook Pro has a keyboard based on the other 2015 Apple keyboard design, in the hope that this keyboard will be more broadly appealing to laptop users.

Primary among those benefits is reliable performance.

While Apple has made improvements over the years to the old keyboard, it was clear that it simply needed to go.3 I am glad to see that Apple has brought the essence of the Magic Keyboard to the notebook line; this is exactly what so many of us wanted.

Apple has bumped the internals of the new MacBook Pro as well. Here’s what you could buy yesterday:

These internals are packed into a chassis that is slightly thicker and slightly heavier than before. The outgoing machine measured up this way:

… compared to the 16-inch MacBook Pro:

Apple’s press release shines some light on a new thermal system under the hood:

The 16-inch MacBook Pro uses the most advanced thermal architecture ever in a Mac notebook to enable the system to run at higher power for sustained periods of time. The sophisticated fan design features a larger impeller with extended blades along with bigger vents, resulting in a 28 percent increase in airflow, while the heat sink is 35 percent larger, enabling significantly more heat dissipation than before. Together, these advancements in cooling capacity allow the 16-inch MacBook Pro to sustain up to 12 more watts during intensive workloads than the previous design.

I’m a fan of these changes. It should give Apple more headroom for future spec bumps, as Intel CPUs don’t seem to be getting much cooler anytime soon.

There are some odds and ends worth talking about:

I understand why this notebook was not presented on stage; Apple wants pros to know about the new machine, but praising its new keyboard while still shipping the old one on 2/3 of its notebook models is a bit awkward.

That said, press were given access to the machine early. Here are some things you should check out:

I find this laptop super interesting. It’s clear that Apple is still dedicated to the vision it set for the MacBook Pro back in 2016. Some will be upset that there are no new ports and the that industrial design is pretty much the same. However, the design has evolved with this model in some meaningful ways that I think a lot of users will appreciate.

The keyboard change is a big deal. The MacBook line’s reputation has been tarnished by this problem for years, and it’s going to take years to recover. The changes to the escape and arrow keys will help, but Apple needs to get this keyboard into the smaller MacBook Pro and MacBook Air as soon as it can.

As for me, I’m not going to be upgrading my i9 Mid 2019 15-inch MacBook Pro. I don’t love the keyboard, but it has been reliable so far, and is covered under the keyboard repair program if the grim reaper comes for it.

However, if you have a 2016 or 2017 15-inch MacBook Pro as your daily driver, this seems like the time to upgrade. Especially if this press video hits you in the feels: