I think we can guess what was keeping Apple busy that year.

Turns out, finding video of WWDC 2001 was way harder than I thought it would be. There are videos of Macworld keynotes that year on YouTube, but I can’t seem to find the developer conference. If you know of a copy of it, please let me know.

Thankfully, Apple’s press release archives go back to 2000, so we have something to go on.

As we’ve seen already, 2001 was a bonkers year for Apple, so I wasn’t surprised to see that the press release coverage left me thinking that WWDC that year was a bit sparse in terms of actual news.1

Here’s how Apple pitched the $1595 conference:

It’s time to raise your development to the power of ten! With Mac OS X, developers can create great-looking, robust software applications and high-performance hardware peripherals.

At Apple’s Worldwide Developers Conference, May 21-25, 2001 in San Jose, California, you will get the very latest information on Mac OS X and other important Apple technologies. What’s more, you’ll get it directly from Apple engineers and technology experts in more than 100 in-depth technical sessions and hands-on labs.

The gift to attendees was something special: a black leather jacket with an Aqua X on the back. Here I am, with my jacket, given to me by James Thomson at Relay FM’s live show at WWDC 2018: 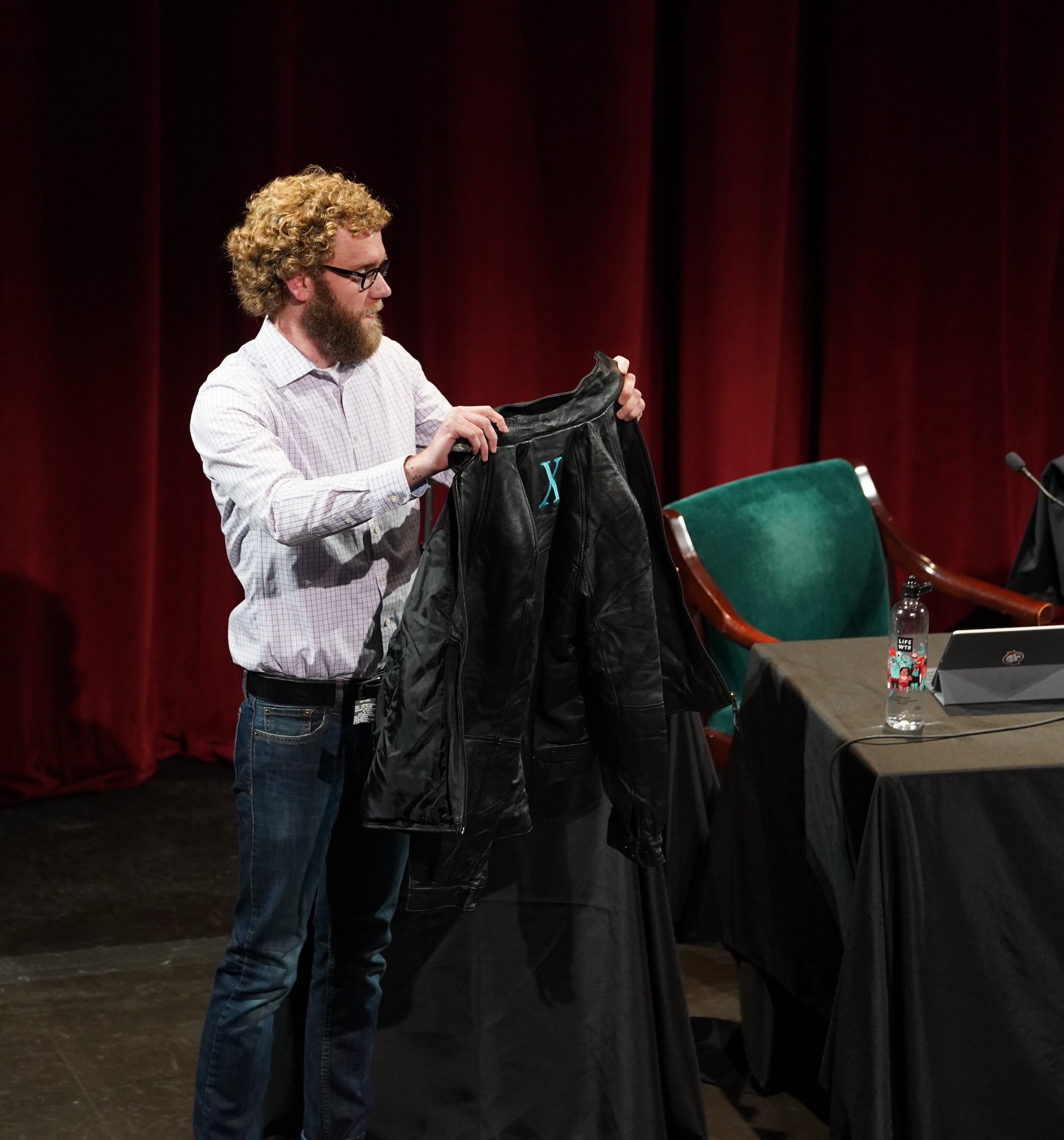 An Update on Apple Retail

The WWDC 2001 keynote took place just days after Apple had opened its first retail stores, and as such, Steve Jobs took some time to talk about them. Here’s a bit from Apple PR:

Apple today announced that its first two retail locations welcomed over 7,700 people and sold a combined total of $599,000 of merchandise during their first two day weekend. The stores, located in Glendale, California and McLean, Virginia are the first of 25 stores the company is opening across the U.S. in 2001.

“We are blown away with the numbers,” said Steve Jobs, Apple’s CEO. “More importantly, customers have told us they love everything about the store—from the knowledgeable sales staff to the Genius Bar to the store’s design and unique approach to presenting digital lifestyle solutions.”

Not a bad start at all.

The 17-inch Studio Display continues the award-winning industrial design of its 15- and 22-inch siblings that is both beautiful and functional. In addition to its slim desktop footprint and low power consumption, the 17-inch Studio Display also features the Apple Display Connector, an innovative single-connection quick-latch mechanism that combines USB, power and video in one cable, for easy hookup and reduced desktop clutter. For easy plug-and-play connections to peripherals, the 17-inch flat panel also offers a 2-port powered USB hub.

This one is a little confusing, as it was the second product Apple sold with this name. The first one was based on Rhapsody, Apple’s failed first attempt at smashing NeXTSTEP and Mac OS together. It was … quickly forgotten.

This new Mac OS X Server was based on Mac OS X 10.0 which had launched just two months before WWDC. To OS X, Apple had added a range of services that, according to the company, would let admins:

Uhhh, WebObjects got a big update at this WWDC. I find it hard to write or talk about WebObjects outside of making jokes about Apple’s infrastructure, so I’m just going to link to the press release and move on.

Even though it was basically brand new, at this event Apple announced that Mac OS X would be pre-installed on all new Macs — alongside Mac OS 9 — effective immediately:

“The reception of Mac OS X has been so positive that we’ve decided to pre-install it alongside Mac OS 9 on all Macs beginning today—two months ahead of schedule,” said Steve Jobs, Apple’s CEO. “This will give all our customers access to the world’s most advanced operating system and ensure a ready and lucrative market for Mac OS X applications.”

Beginning today, all new Macs coming from Apple’s factories will include both Mac OS X and Mac OS 9.1 pre-installed. The systems are set to default boot into Mac OS 9.1, but using Apple’s Dual Boot technology users can easily change the default boot to Mac OS X, and just as easily revert back to Mac OS 9.1 if they choose. During the transition, customers buying new Macs that do not yet have Mac OS X pre-installed will receive a free copy of Mac OS X.

A lot of people probably experienced Mac OS X for the first time because of this. I’ve heard many people say that they would boot into OS X, poke around a bit, then return to Mac OS 9 for getting their work done. Over time that would change, and this was one of the first big steps in that direction.