In my series 2001 Revisited, I’m covering Apple’s major announcements from 20 years ago. This month, we’re looking at Macworld San Francisco.

To kick off what would be a very busy year, Steve Jobs took to the Macworld stage in San Francisco, boasting that in addition to the 5,000 people in attendance, tens of thousands of people were watching via livestream around the world via QuickTime.

Jobs started by talking about Mac OS X, recapping the new operating system’s architecture, from the kernel on up all the way to the new UI, dubbed Aqua. 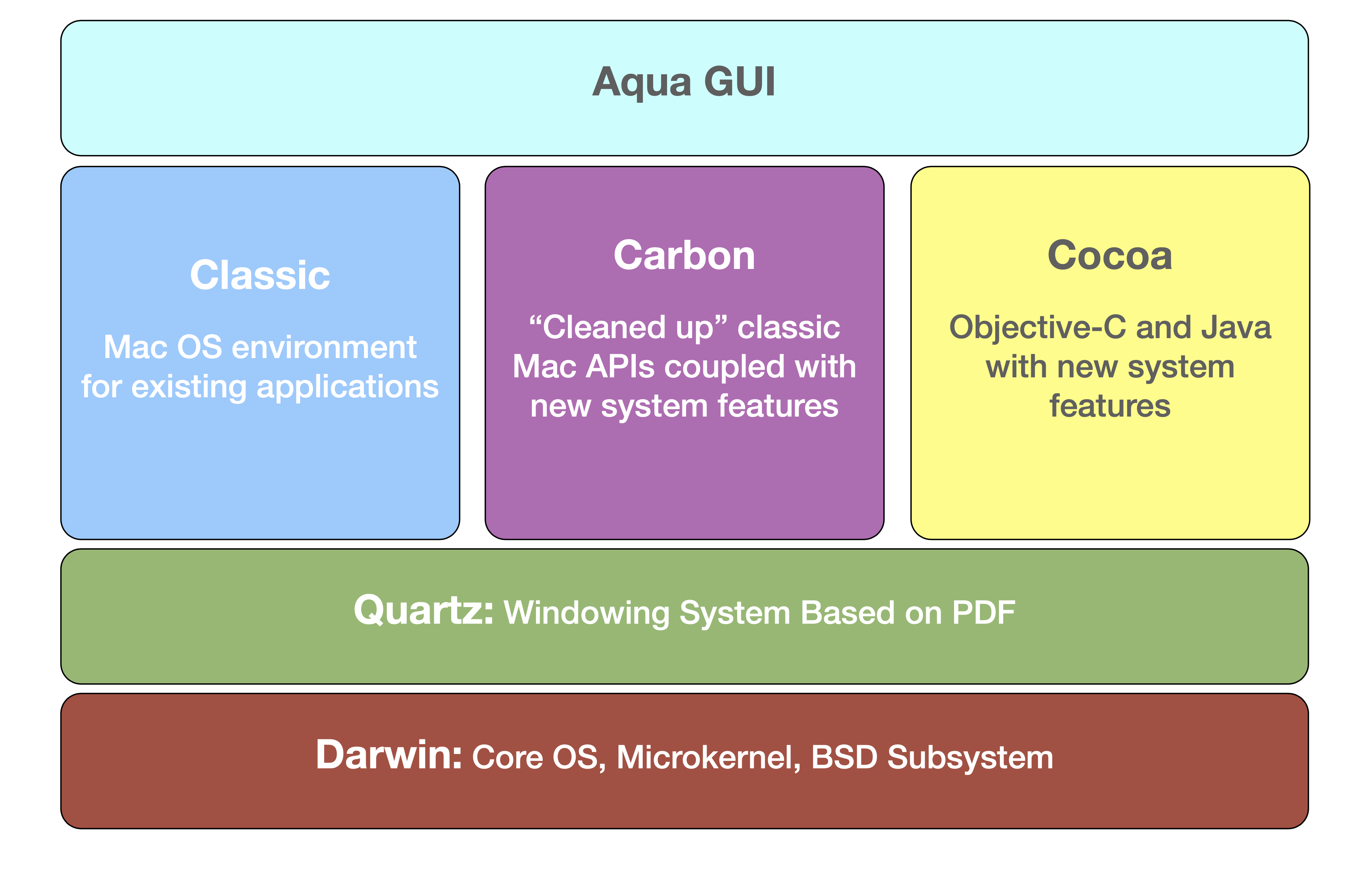 I ripped this graphic out of my book about the iMac G3 and the roots of Mac OS X. You should check it out.

He praised the Mac OS X Public Beta, which had on sale since September 2000. Some 100,000 people had purchased it, providing 75,000 feedback submissions.1

After thanking the community for their feedback and involvement, he outlined some common themes in the reports. The first was positive feedback, naturally:

Then he tackled a list of features missing from the public beta:

After revealing that those features were all in the current build of the OS, Jobs shared some concerns they had been hearing from users:

The placement of the Apple logo in the Public Beta was centered in the menu bar, which was ridiculous: 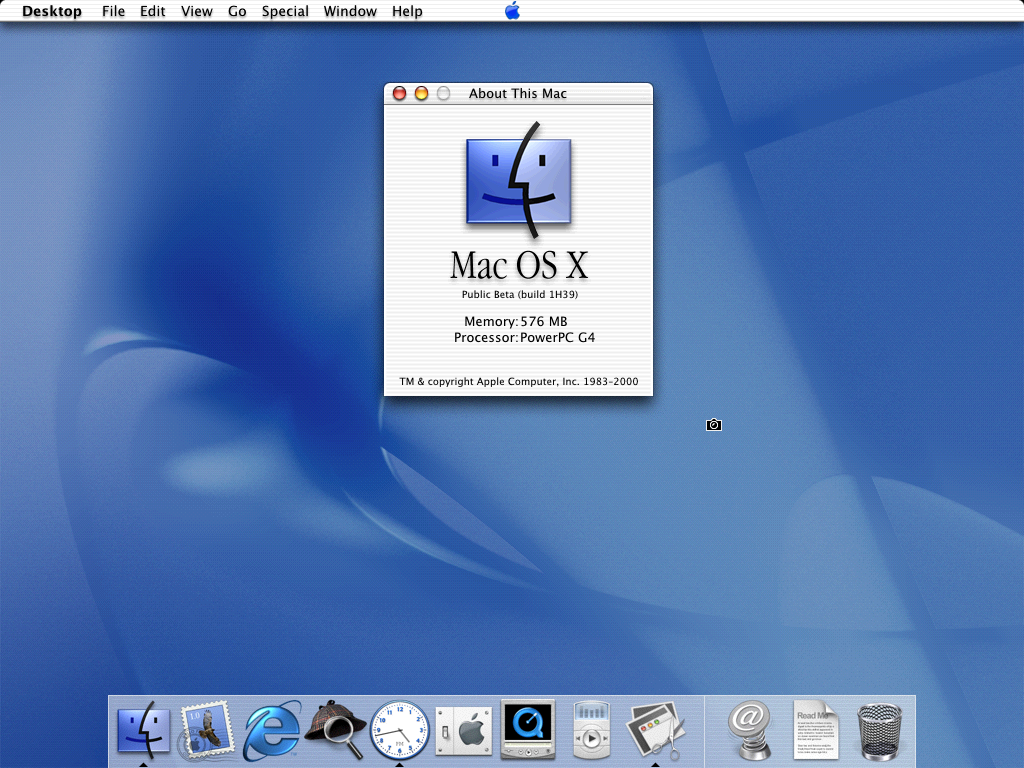 To make matters worse, it was just a logo without any menu items, forgoing one of Mac OS’ more useful UI features.

Thankfully, Apple put it back in the correct place on the left and made it an actual menu again for system-level controls such as Sleep, Restart and Shutdown.

(In the classic Mac OS, these were under the Special menu, and were only available when in the Finder, which was a bit odd.)

To this, Apple added a list of recent items and a way to switch network locations without taking a trip to System Preferences. It wasn’t as flexible as the old Apple menu, but it was a big improvement over the beta.

Toolbars in Finder and other apps were made smaller and customizable, so users could put their own favorite commands and shortcuts where they wanted them. Finder also picked up the ability to spawn a new window for every folder and sub-folder moved through on a user’s way to their desired destination. While this may have looked like the classic Mac OS’ way of doing things, it missed the mark, according to John Siracusa:

The Mac OS X Finder needs a lot of work before it can fill the shoes of its predecessor. The addition of many useful and powerful features to the Mac OS experience (column view, browser mode, the toolbar, bundle manipulation, file mapping, and built-in network integration) does not outweigh the significant problems. Missing features, mis-features, and bugs render the new Finder unable to reproduce the spatial file manipulation environment that has been the defining characteristic of the Macintosh experience since 1984.

Speaking of features from Mac OS, the Control Strip wasn’t reintroduced, but its easy access to settings was shoved into “Docklets,” or icons in the Dock that managed these settings but didn’t launch applications.2 They were weird.

In the early days of Mac OS X, there were a handful of these, including:

Mercifully, Docklets were killed off with Mac OS X 10.1 Puma, but that’s an operating system update for a different time.

After discussing Mac OS X itself, Jobs walked through the Carbon and Cocoa application environments. As a recap, early versions of Mac OS X could run classic apps inside a virtual OS 9 machine and apps that had been “carbonized” to run natively on OS X, accessing new features like protected memory and the updated user interface.

Lastly, there was Cocoa, which had its roots in NeXTSTEP, not Mac OS. This was to be a new generation of Mac applications, written in Objective-C.

Jobs boasted that some 400 developers had committed to Mac OS X, accounting for more than 1,200 software titles. While they would not all be out on day one, Jobs pitched a bright future, full of software for Apple’s new operating system.

After a demonstration of Maya on the new OS, the keynote turned to the schedule. Jobs announced that Mac OS X would go one sale on March 24, 2001 for $129. Starting in July, Mac OS X would be the bundled, default OS on new Apple hardware, Jobs said. He closed out this section saying:

We know that Mac OS X is really laying the foundation for the next decade to decade and a half of our software efforts. We think we’ve got something really, really good here. I hope you love it as much as we do.

After thirty minutes of software talk, the keynote turned to hardware, starting with a new generation of Power Mac G4 towers. The last machines to use the original industrial design, these are known as the “Digital Audio” G4s. 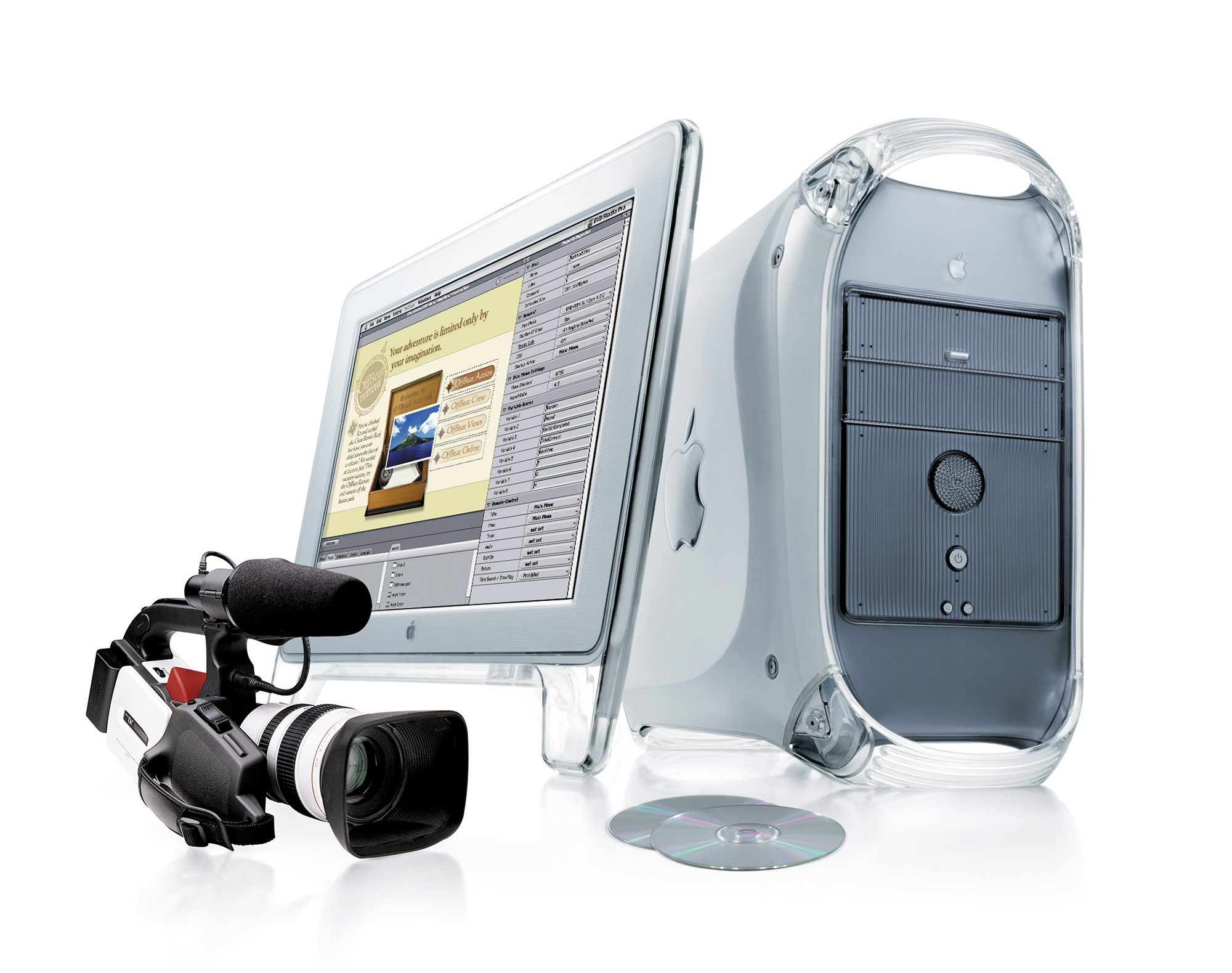 The name came from the included built-in amplifier, which could be used with Apple’s USB Pro Speakers, also announced at Macworld 2001.

Jobs said the theme for this new generation of G4 was “Power to Burn,” before acknowledging that the Power Mac had topped out at 500 MHz a year and a half before this. These new machines could be ordered with up to a 733 MHz G4, delivering 5.5 gigaflops of computing power.

The new line was broken down into four models, as detailed in this archived tech spec sheet on Apple’s website.

Prices ranges from $1699 to $3499. That most expensive model came with a SuperDrive, which Jobs said was an industry first. It could read and write both CDs and DVDs. Those DVDs could be then played on a consumer DVD player. It was a big deal, as Jobs joked: The new G4 could burn CDs, DVDs and Pentiums.

This launched into one of many races Apple would hold between their slower-clocked PowerPC Macs and Windows machines running faster-on-paper Intel CPUs. This time, Phil Schiller came out to show that a 733 MHz Power Mac G4 could run circles around the new 1.5 GHz Pentium 4, at least in Photoshop 6.

The 466 and 533 MHz models were on sale immediately, with the faster SKUs coming the next month.

To make burning CDs on Mac OS 9 and Mac OS X easier, Jobs showed that Finder had been updated to treat blank optical media as a folder. A user could drag files and folders to it, then tell the system to burn the disc when they were ready.

I’ve already mentioned the Pro Speakers that Apple announced with these machines. Designed in conjunction with Harman/Kardon, they were clear spherical speakers, each roughly the size of the HomePod mini. They sold for $59 a set.

Then, Jobs showed the company’s 15-inch Studio Display, a smaller, less-expensive sibling to the 22-inch variant pictured above with the Power Mac. It used Apple Display Connector (ADC) for power, video and USB all over one cable. It had been for sale at $999, but got a price cut here to $799. 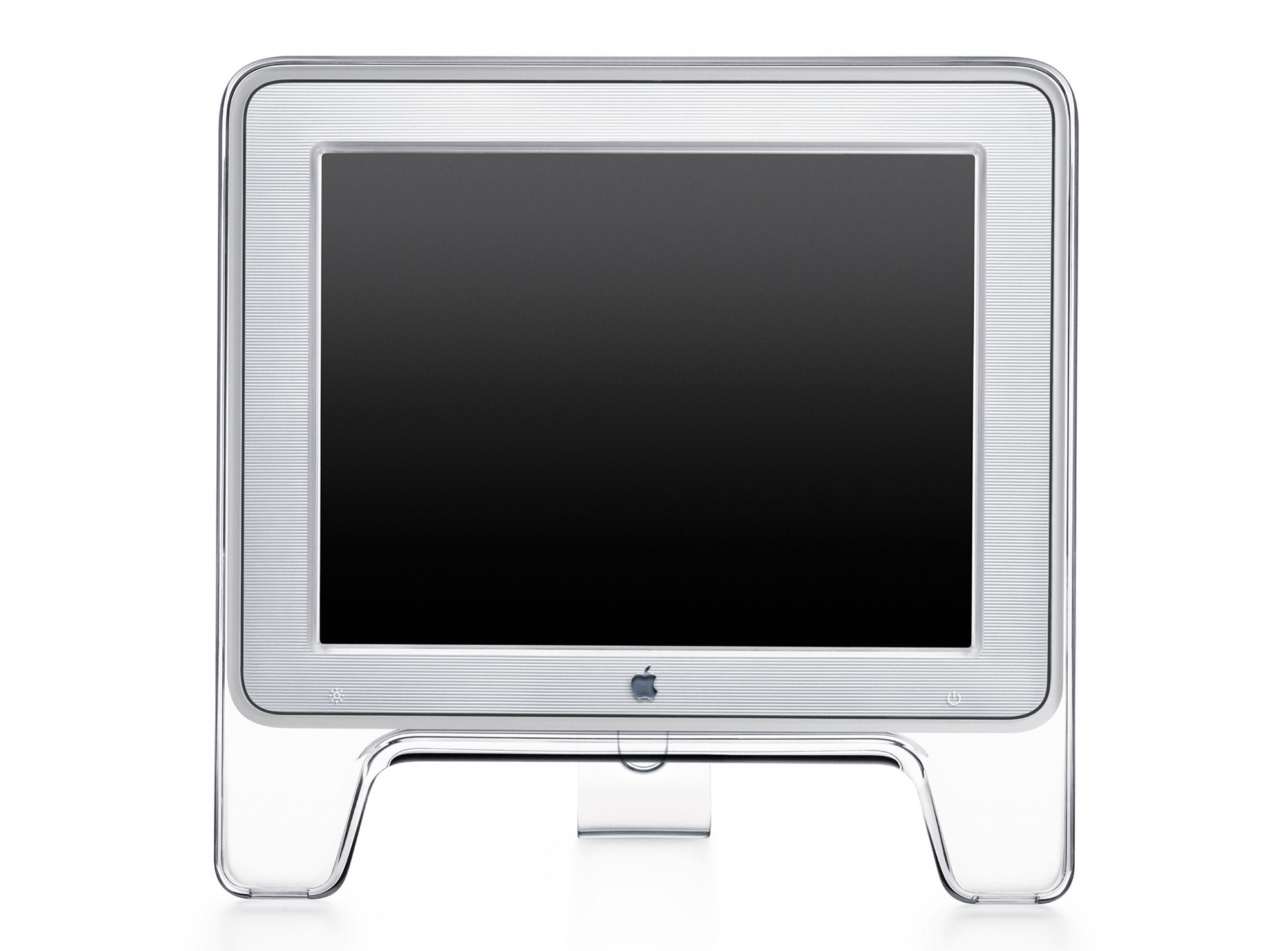 Jobs opened the next section, referencing the downturn in the PC industry. While some were closing up shop on the personal computer, Jobs said Apple saw things differently. The PC wasn’t dying; it was evolving. He laid out his interpretation of the personal computer industry’s history:

Jobs then said the PC industry was about to enter its third great era — the age of the Digital Lifestyle.

Here’s how he laid out this vision:

I wrote about the advent and evolution of the Digital Hub over on iMore if you want to read more. Needless to say, Jobs’ words were prophetic and over the subsequent years, Apple would flesh out this vision with products like the iPod for mobile music listening and iPhoto for managing digital photos.

The news at Macworld 2001 was all about digital music. He explained how MP3s worked, and how this was a revolution already underway. In fact, in 2000 alone, 320 million blank CD-Rs had been sold in the United States, and portable MP3 players were becoming popular.4

Jobs walked the crowd through the current music applications and showed how they were just too complex to use, and often came with restrictions on encoding and burning unless the user paid up. 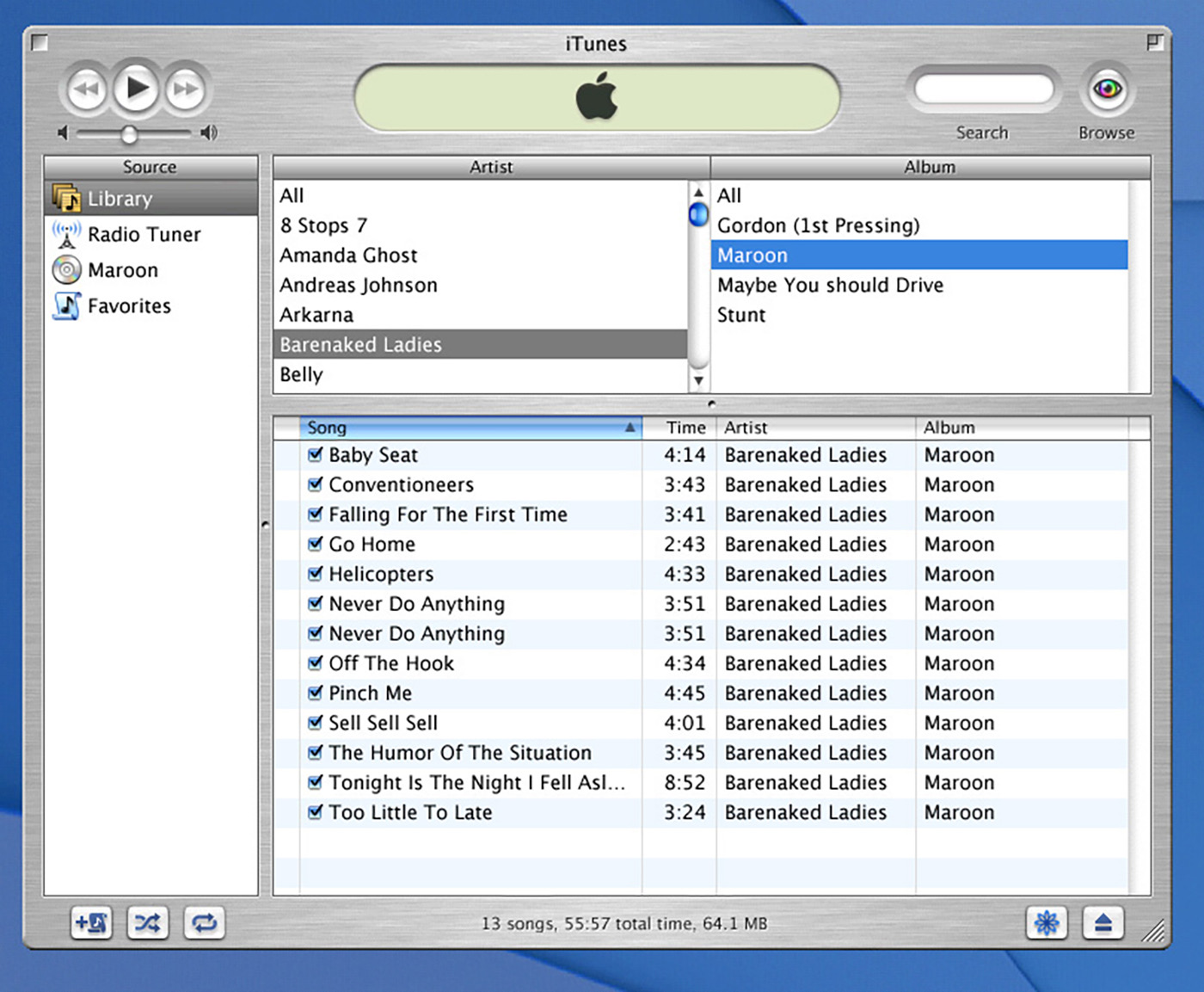 While it’s hard to believe given what would happen to iTunes over the next two decades, but this version of the product was clean and simple.5 Users could import CDs, organize their music into playlists and then burn those playlists onto CD-Rs to take with them. It even had a visualizer and a hip design.

After talking about iTunes, Jobs changed gears to talk about the explosion of DVD usage in households and businesses around the world. The dream, he said, was to make your own DVDs, with your own movies on them — and play them on consumer-grade DVD players.

iMovie, which had been around since 1999 let uses edit home video, but that’s as far as it went. By 2001, Apple was ready, thanks to the SuperDrive to burn the discs, and the power of the Power Mac G4’s Velocity Engine to encode the data in software at just 2x real time, a huge increase from the 25x real time that was required before this breakthrough.

This was all building to iDVD, a new application for laying out DVDs with menus. 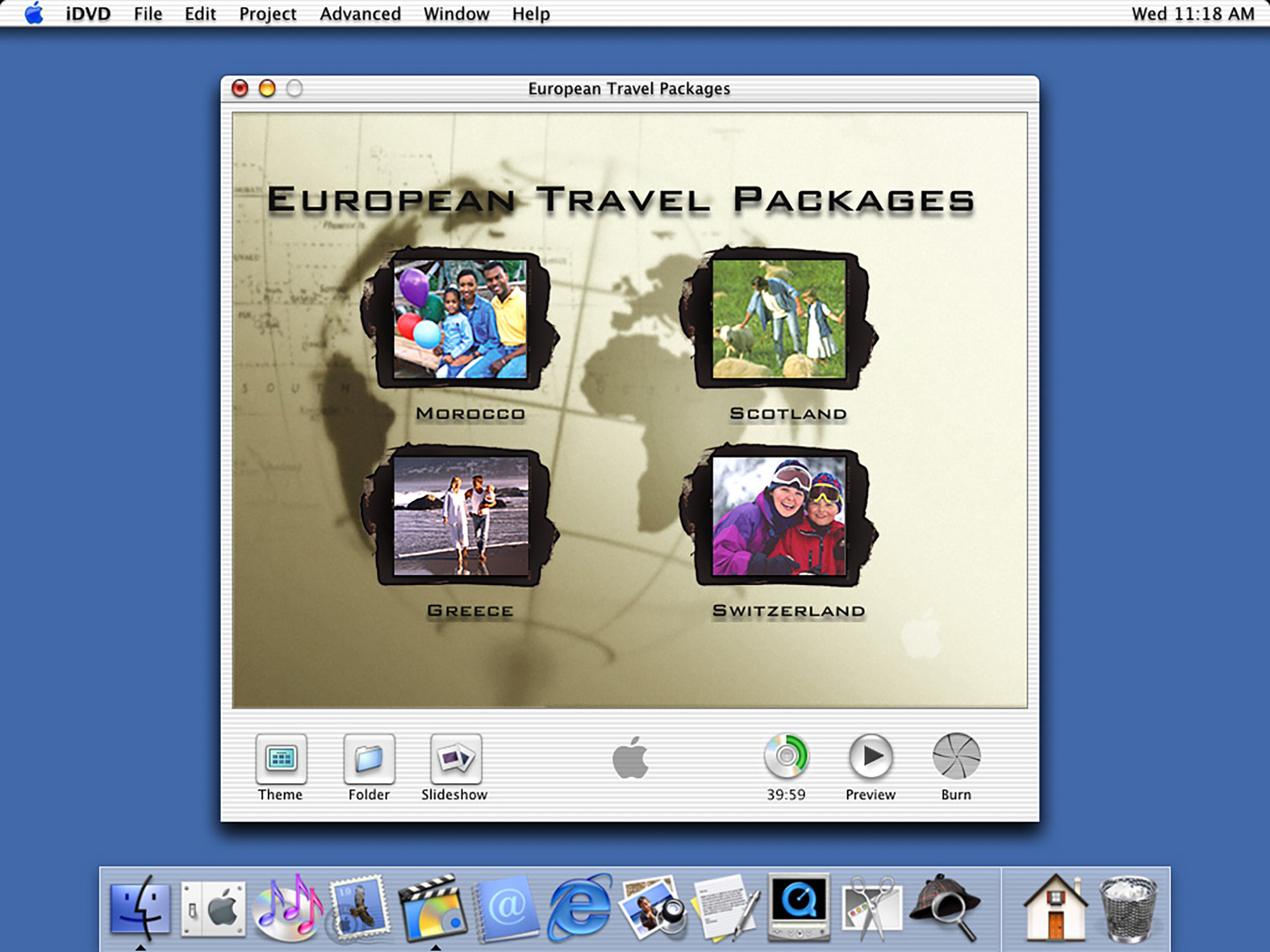 Jobs demoed the new title on one of the just-announced Power Mac G4s running Mac OS 9. He quickly added titles, menus and the media for playback, thanks to iDVD’s built-in collection of themes, templates and layout tools.6

In just a few short years, this technology would show up in cheaper desktop and even notebooks, but this was a big deal, and along with iTunes and iMovie, formed the foundation that would later become iLife, complete with iPhoto and even later, iWeb.

While the Power Mac G4 was great, the real hardware star of this event was my all-time favorite Apple notebook: the Titanium PowerBook G4. It was Job’s One More Thing, after 90 minutes on stage. 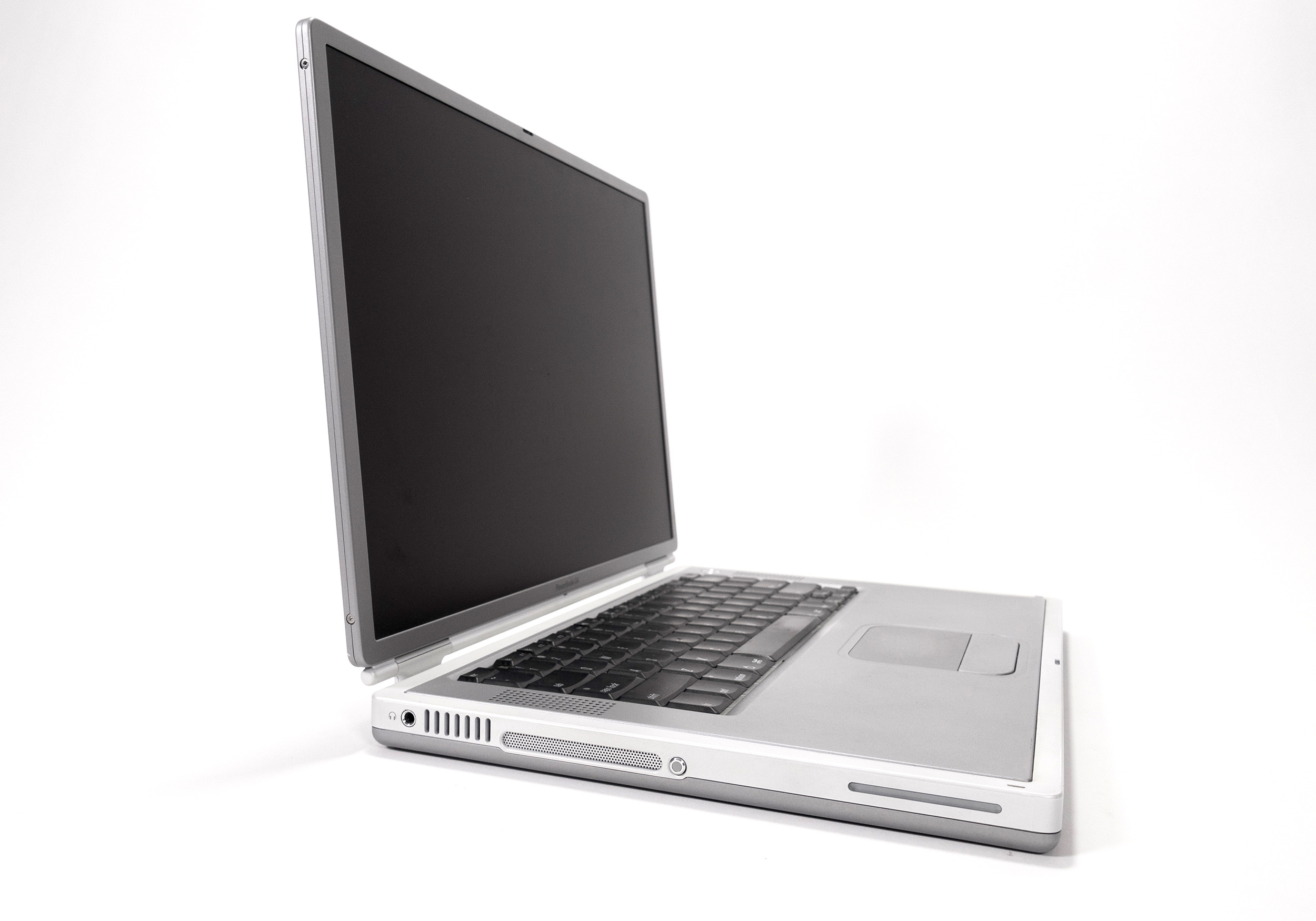 I’ve covered this machine a lot over the years, but in short, it was a huge departure from the PowerBook G3 series of machines. It was thin and made of metal, and brought the G4 to a notebook for the first time, with either a 400 or 500 MHz G4 in a chassis that was just one inch thick, weighing 5.2 pounds. It boasted a 15.2-inch widescreen display and slot-loading optical drive, all housed in a Titanium chassis.

Apple was very proud of this machine, as you can tell from the press release:

“The all new Titanium PowerBook G4 is the most revolutionary portable computer ever created,” said Steve Jobs, Apple’s CEO. “Its a supercomputer to go’ in terms of performance, yet it’s thinner and sexier than the best subnotebooks.”

As it would turn out, this would be a short-lived design, as it had rather weak hinges and the paint used on parts of the case would often chip and flake off, making the expensive laptop look like a beater.

To learn more about this machine, I recommend this article on iMore and Jason Snell’s recent coverage of the machine on Six Colors and in the 20 Macs for 2020 podcast feed.

…and of course my video on the machine from a few years ago:

This Macworld keynote is jam-packed with stuff that would really change Apple’s trajectory for years to come. Mac OS X would spin off other operating systems to power things from the iPhone to the Apple Watch. iTunes has since been replaced,7 but music is still near and dear to Apple. Most people haven’t thought about iDVD in years, but we all use Apple devices to shoot and share video. And, of course, Apple is still in the business of making fast and capable Macs.