A few years ago, I wrote about the now-dead Dashboard, which was was in macOS for a long, long time:

While not as flashy or important as Tiger’s keystone feature, Spotlight, Dashboard still enjoyed a big push from Jobs on stage.

A user could tap a keyboard shortcut or visit a hot corner and Dashboard would activate, dimming the screen and flying in widgets. Adding new ones could be done with a click of the mouse.

(My Titanium PowerBook’s GPU couldn’t render the water ripple effect that played when a new widget was added to Dashboard. However, college roommate’s aluminum PowerBook could do it without breaking a sweat. I was insanely jealous of him for about 72 hours after we both installed Tiger in our dorm room.)

Jobs pitched widgets as mini-apps that let you look up a quick bit of information without ruining your workflow or train of thought. They allowed for quick interactions. They were present when you needed them, and disappeared when you didn’t.

The original design of Dashboard was very of its time. Just soak this in for a minute:

The design of Dashboard got toned down over time, and eventually it wasn’t even enabled by default on clean macOS installations. Keyboards that once shipped with a dedicated Dashboard shortcut were slowly phased out. By the time Apple finally pulled the plug on Dashboard in macOS Catalina, most of the widgets that once graced this corner of the OS had died off. The party had packed up years earlier, leaving just a small percentage of users still relying on the feature.1

Apple killed off Dashboard at exactly the wrong time. Just one year after Catalina killed Dashboard, Apple started allowing developers to bring their iOS widgets over to the Mac in macOS Big Sur. Sadly, they all got stuffed into the slide-out Notification Center user interface: 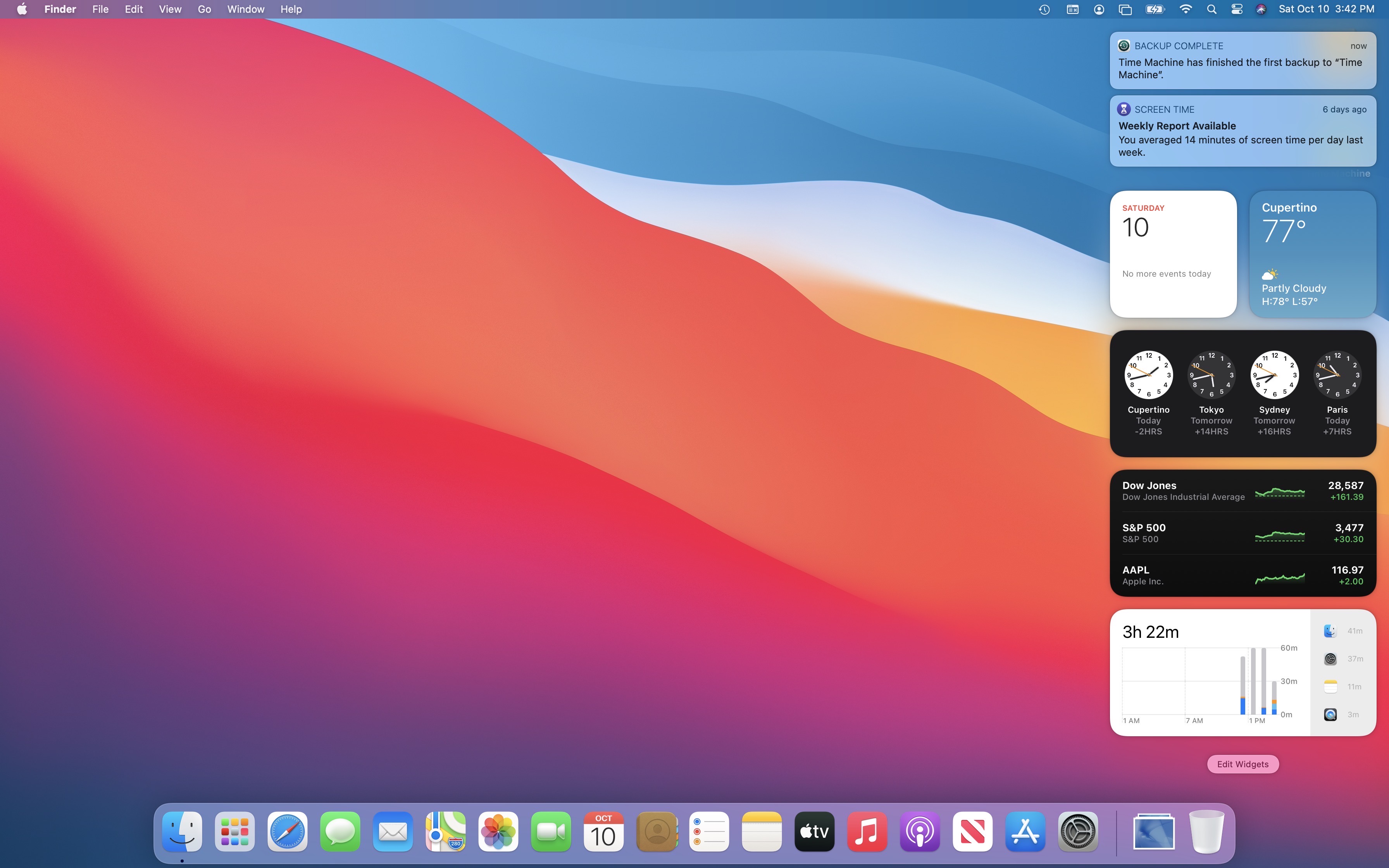 Notification Center is a real mess. Even on a Pro Display XDR, you get three visible notifications. That’s it. Anything older is hidden behind a button, regardless of how many widgets you may have in the lower section of the Notification Center column: 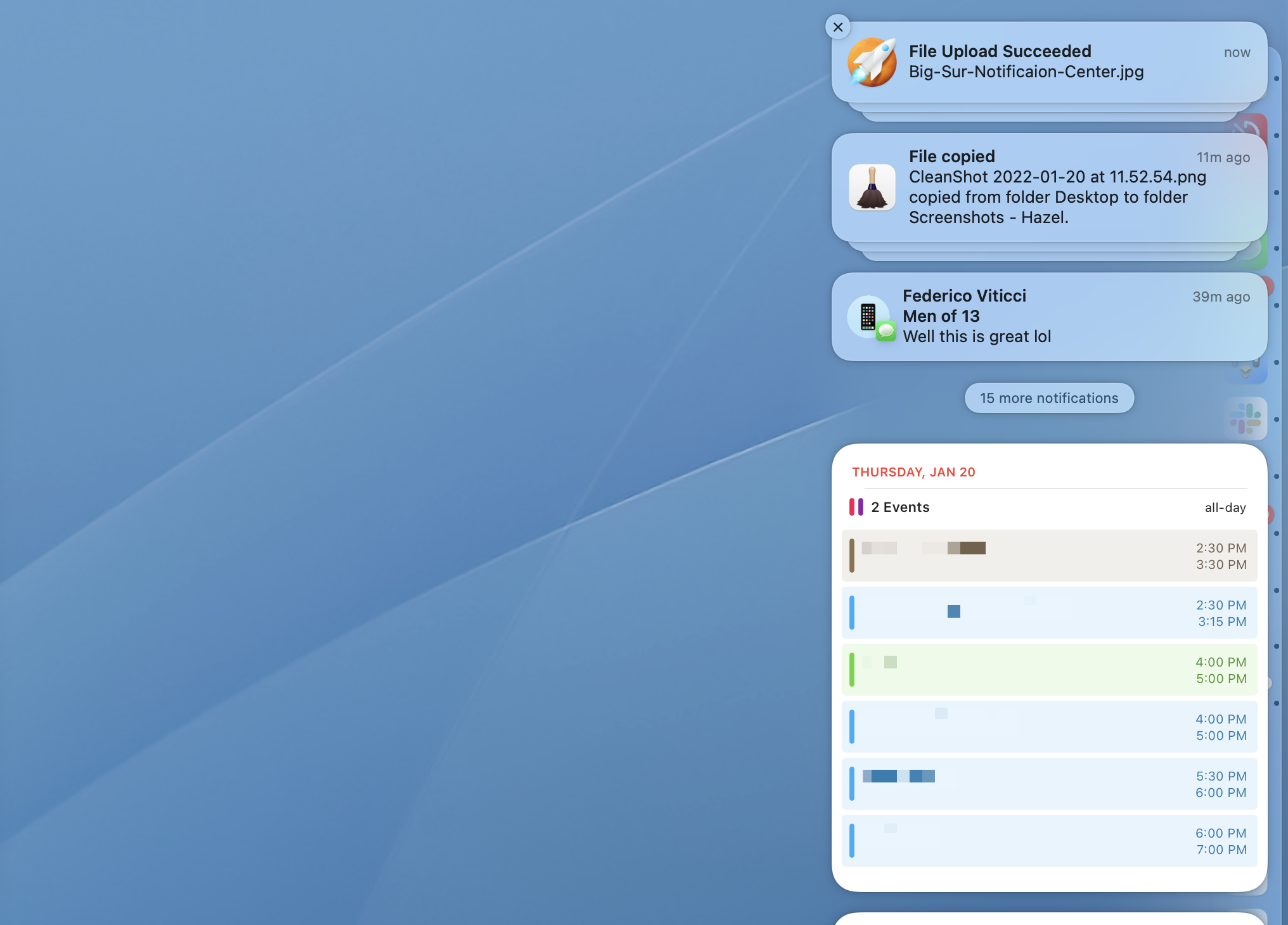 Apple needs to rethink this and let this new class of widgets2 breathe, being able to use the entire screen like the widgets of yore could. Bringing back Dashboard is an obvious solution here, and I’d love to see it make a return.

Update: Steve Troughton-Smith tweeted this in reply to my post:

Widgets need a permanent home in the Mac UI, not hidden off in a Notification Center nobody looks at anyway. Alternative would be massively improving Launchpad to work much more like SpringBoard, and allow you to set that in place of your desktop.

I thought about the Launchpad angle for a while, and I can see how turning it into a more iPad-like experience would be neat. A single place to get info from your widgets and launch a few favorite apps would be better than what we have now.

However, I think Apple has backed off the idea of needing to turn the iPad and Mac into each other, at least from a user interface standpoint. If Launchpad were to be updated to support widgets, I think it would remain an overlay to the macOS interface, not become the new center of it.